Lana Tatour
While his articles have sent shockwaves through the liberal Zionist community, they fail to acknowledge that Zionism itself is the real problem 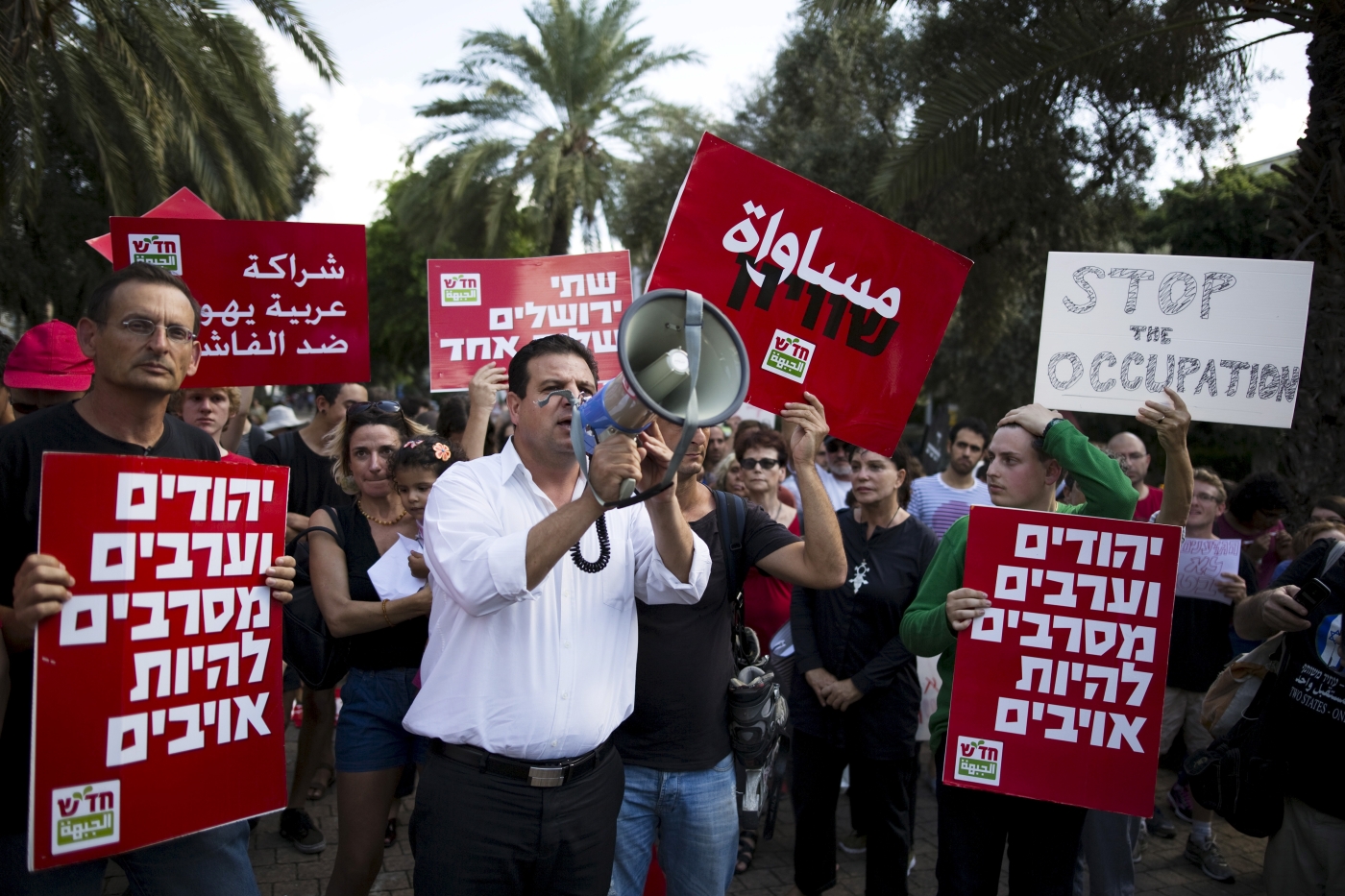 Ayman Odeh, leader of the Joint Arab list take part in a left-wing protest in light of recent Palestinian-Israeli violence in Tel Aviv on 9 October, 2015 (Reuters)

A few days ago, Peter Beinart published a pair of articles in the New York Times and Jewish Currents, calling for one binational state based on equality between Jews and Palestinians.

The endorsement of a one-state solution by Beinart - a staunch liberal Zionist who once advocated a two-state solution - has sent shockwaves through liberal circles and beyond. But while this is a welcome intervention, the main problem with Beinart’s argument is his focus on the occupation that has been ongoing since 1967 and the collapse of the Oslo process.

Beinart’s prognosis fails to identify what the problem really is: not 1967, but rather 1948 and Zionism itself as a settler-colonial, racial project.

As many have commented, Beinart is simply saying what Palestinians have said for decades. Palestinian intellectuals, activists and academics such as Edward Said, Joseph Massad, Diana Buttu, Noura Erakat, Lila Farsakh, Yousef Munayyer and Ali Abunimah, to name a few, have long advocated for one democratic state in which both Palestinians and Jews can live in equality.

Yet, their calls did not get the attention that Beinart is now receiving, showing that Palestinians are still fighting for what Said called “the permission to narrate”. The erasure of Palestinian voices from the conversation reveals the racism that renders Palestinian voices less intelligible than white Jewish voices in liberal circuits of power.

Beinart's call also reflects historical amnesia. The call for one state was an explicit political objective of the Palestinian national movement

As Professor Saree Makdisi noted on Twitter: “For years, Palestinians have been saying what @PeterBeinart recently said; after overcoming mountains of obstacles to get our pieces published in major newspapers, none of us got the instant attention Beinart did, not because we are less articulate - but because of who we are.”

Beinart’s call also reflects historical amnesia. The call for one state was an explicit political objective of the Palestinian national movement. In his famous UN speech in 1974, former Palestinian leader Yasser Arafat stated: “We are struggling so that Jews, Christians and Muslims may live in equality, enjoying the same rights and assuming the same duties, free from racial or religious discrimination.”

It was not Palestinians who introduced the logic of racial separation between Jews and Palestinians in Palestine that Beinart asks to fix; it was Zionism.

In his plea for Israel-Palestine to be also a “Jewish home” (whatever that might mean), Beinart also seems to forget that historically, Palestine was home to its Jewish native population, as it was to its Muslim and Christian population and its other ethnic minorities. The Palestinian national movement always distinguished between Jews native to Palestine and Jewish settlers. It is Zionism that erased this distinction.

His pieces indicate that he remains a committed Zionist. His support for a single state is not the result of him abandoning Zionism, but rather due to an ambition to remake liberal Zionism into something that true liberal Zionists, like himself, can live with.

In his call for a one-state solution, Beinart tries to have his cake and eat it too. He attempts to adopt a progressive position in favour of equality, while erasing the Nakba and sustaining the legitimacy of Zionism. Beinart remains loyal to the classic liberal Zionist position that considers the colonisation of Palestine in 1948 and the Nakba as legitimate, while labelling 1967 as a threat to the project of a moral Jewish state in Palestine.

Basically, for Beinart, it is the failure of the Oslo Accords to result in two states that makes the one-state solution necessary - not the correction of historical injustice.

Addressing the root cause

Since colonisation is deemed superfluous in his analysis, the quest for equal rights between Jews and Palestinians, rather than decolonisation, guides his support for one state. Beinart writes: “Many of the political movements from the last century that spoke in the language of national independence - from Algeria’s National Liberation Front to the Vietcong - have faded as models. But the demand for equality … retains enormous moral power.” Beinart is clearly more comfortable with the language of liberal equality than he is with anti-colonial vocabulary. His framing of the one-state solution as an issue of equality is not merely a matter of pragmatism, or an attempt to speak to a large international audience in the West. It is a profound ideological refusal to reckon with Zionism as a racial and settler-colonial ideology.

Equality is important. There is a reason why even the most basic demands for equality are perceived by the Israeli state as a threat. But inequality never exists in a vacuum; in Palestine, it is the product of Zionist racial and colonial logic, which renders Jews superior to Palestinians.

Equality as a liberal framework can only get us so far if we do not address the root cause of inequality: Zionism.

As Palestinians have been saying all along, a democratic, inclusive single state is the way forward. But the one-state solution cannot be based only on demands for equality, as Beinart suggests. The road to equality runs through a profound process of decolonisation and de-racialisation.