Why is Sajid Javid so rattled by Cage?

Moazzam Begg
In targeting Cage and other prominent Muslim organisations, the UK's former home secretary is guilty of the very thing he claims to oppose: Islamophobia in his own party 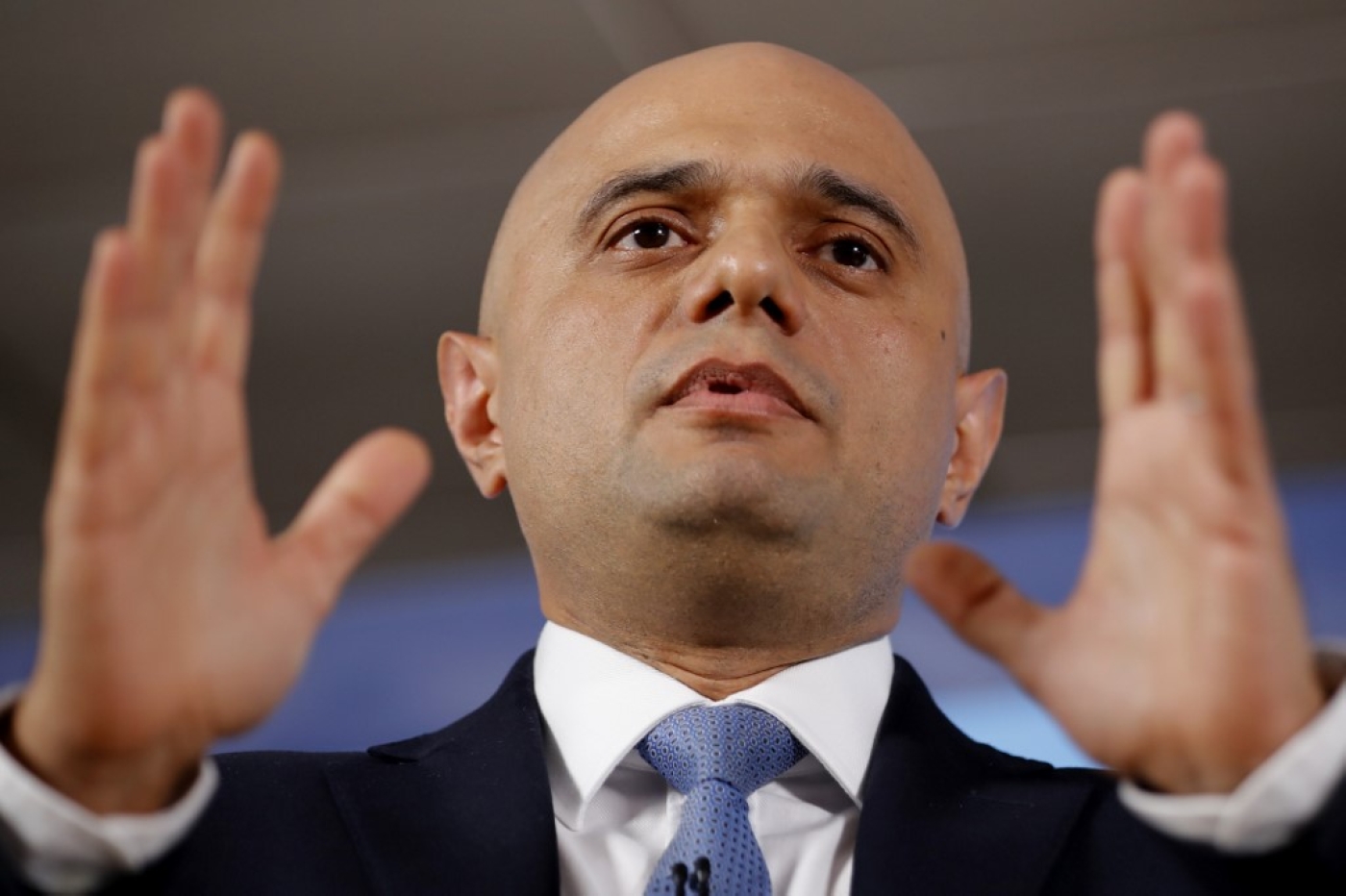 Last Friday, the UK's former home secretary Sajid Javid, who was appointed on Wednesday as chancellor in Boris Johnson's new cabinet, delivered a speech at a London community centre in which he attacked several Muslim organisations using the “extremism” label.

In today’s world, that is hardly unusual, since the term “extremism” has become broad and malleable in the hands of those in power. Cage was one of the organisations mentioned, which is also not unusual, especially when it comes to the Tories.

But what Javid did, which none of his predecessors have done, is to openly declare his opposition to Cage and express, with evident frustration, the extent of our reach, and how he intends to curb our influence and success.

Stating that British-based Muslim organisations, such as the Islamic Human Rights Commission (IHRC), Hizb ut-Tahrir and MEND spread “extremist views”, Javid noted: “One of the most prominent organisations that rejects our shared values is called Cage.”

That single line put Cage squarely in the government’s crosshairs. It spoke to two things: prominence and shared values.

Cage’s prominence has come about for one key reason, and this is the bitterest pill for the government to swallow. We have been documenting US and British roles in gross human rights violations of Muslim prisoners since the beginning of the “War on Terror”. Our prominence has only grown due to the lack of government accountability for these abuses.

Proving this point, the Cabinet Office secretary, David Lidington, speaking on behalf of now ex-prime minister Theresa May, recently told parliament that “there is no legal obligation” on the government to establish an inquiry to assess the extent of Britain’s complicity in war crimes, including abduction (“rendition”), false imprisonment and torture.

Responding in the Guardian, I noted that Cage and former prisoners have participated in multiple legal, judicial and political processes that “have confirmed and accepted that UK officials have been both complicit in, and turned a blind eye to, torture. Despite survivors of torture seeking justice and accountability for almost two decades, the government has shown repeatedly, and today confirmed, that it simply does not hold itself to the values it claims to promote.”

Former Brexit secretary David Davis, a prominent anti-torture advocate, went further: “I’ll resist the temptation to reply to the failure to provide a judge-led inquiry in four words: those words being ‘see you in court’ … Plainly, the government has not learned its lesson yet.”

Torture in the context of war is a war crime. Covering up and protecting those who facilitated it is also a war crime - especially if the government greases the wheels to cover it up. Javid began his recent lecture by addressing something that immediately resonated with me. He explained how, growing up, he encountered the word “Paki” repeatedly, and referred to the real threat from far-right groups such as the National Front. He even said that he once punched a racist bully.

As a child who went to school during the 1970s and 80s, I know full well what it’s like to be beaten up by racists and to endure racial hatred - and what happens if you don’t fight back. I would say, arguably, those forces helped shape the person I am today.

Of course, racism today has adopted a new visage. Yesterday’s racists today claim they just oppose “ideas” - the ideology of Islam, to be precise. For a moment, it seemed like the home secretary was finally going to call this out where it really mattered.

But then he went on: “Around the world populism, prejudice - and even open racism - have catapulted extremists into power … Thankfully, our politics has not gone down the same road as much of Europe and the US.”

It was evident who Javid was talking about, so why didn’t he mention names? Anti-Muslim activists and far-right groups, from Britain First and the English Defence League to the Football Lads Alliance, say they’re not racist, but opposed to Islam. This is what mainstream politicians across Europe say, too - as does the US president, repeatedly, even retweeting some of these groups.

This is the same president who believes “torture works” and ordered Guantanamo to remain open - the same torture and prison camp where British interrogators sent British men and other citizens, interrogators and their commanders, whom Javid’s government now refuses to investigate.

In his speech, Javid boldly said: “And while we wait, I will continue, in that time, to call out extremism wherever I see it.” But Javid has only named Muslim organisations that offer an alternative narrative to that of the torture and racism apologists. He was never going to call out his own colleagues.

After speaking about the threat of racism that has catapulted extremists into power, Javid did a volte-face. This happened after he made the fatal error of trying to define “extremism”.

Asking the question “what exactly is extremism?”, he went on to do anything but answer it. He toggled from saying it’s “not black and white” to calling it the “thin end of a wedge” to noting that it “incites harm and becomes criminal” - all massively broad and sweeping statements, with which most British teenagers are all too familiar. Then he insisted, somewhat unconvincingly, that he did not want to become the “thought police.”

Javid did not have the courage to acknowledge the fact that there are already strict laws about inciting hatred in Britain, which conform to due process and have seen us well enough so far, and that there is no legally acceptable, let alone workable, definition of extremism.

This is underlined by the uncomfortable truth that tripped up his predecessors and made it necessary to unceremoniously brush the counter-extremism bill under the proverbial carpet, simply because the notion of “extremism” was and always will be  subjective, confusing and undefined.

But we are given some direction on this. According to David Cameron and May, opposing fundamental British values such as the “rule of law” is extremism.

Surely, failing to hold torturers and human rights abusers to account, or at least mounting an independent inquiry when multiple testimonies point to some uncomfortable truths, is a clear violation of the rule of law. This would make Javid and his government, extremists - and not only that, if it must be a crime, then they are likely repeat offenders.

Last year, Chancellor Philip Hammond labelled Brexiteers who pursued a no-deal Brexit as extremists. He was talking about MP Jacob Rees-Mogg and Boris Johnson, who will soon be sworn in as Britain’s next prime minister.

In an unscripted part of his speech, Javid went on to praise Brexit Party leader Nigel Farage for leaving Ukip. The US president and Farage are good friends; in June they met for talks during Donald Trump’s visit to Britain.

Preceding his visit, Trump called on Britain to send in Farage to negotiate the exit from the European Union. During the visit, the “extremist” US president was invited by the Queen for a state banquet. Javid was markedly not invited.

This prompted accusations of Islamophobia. During a televised Conservative leadership debate, Javid asked for an external inquiry into Islamophobia among the Conservatives. None of the candidates objected. Predictably, the proposed inquiry has been shelved and changed into a “general inquiry” into everything - except, it appears, “extremists” in government.

The whole thing becomes circular and ridiculous when, in targeting Cage and other prominent Muslim organisations, Javid is guilty of the very thing he claims to oppose: Islamophobia in his own party.

Javid’s plans to tackle “extremism” targeted Cage - but in a most peculiar way. He said: “I have amended the guidance for sponsoring migrant workers. This will allow us to refuse or revoke a sponsor licence where an organisation behaves in a way that is inconsistent with British values, or that’s detrimental to the public good.

"I can tell you now that I plan to revoke Cage’s licence on this basis, subject to representations. I will do all I can to ensure groups like Cage are not trusted with the privilege of sponsorship and I will see it removed.”

We were all rather puzzled at this latest swipe at us. Cage currently has no migrant workers. Our staff in the UK are all either British or EU citizens.

We’ve only ever employed two migrant workers. One was a non-Muslim American who wrote reports on US torture, and the other was a citizen of New Zealand who was closely connected to friends and relatives of the Christchurch massacre.

One wonders precisely how this will hinder our work, and the answer, quite simply, is that it won’t.

What is more concerning is Javid’s tokenism, and how and why he chose to draw the issue of migrant workers into the frame of “extremism”.

Last year, Javid made the bumbling mistake of saying that critics of the government’s counter-extremism programme, Prevent, were “on the side of extremists”. Critics of Prevent include former police officers, politicians, the former director of public prosecutions, the National Union of Teachers, the National Union of Students, and and even former advisers to Prevent.

In fact, UN reports into the workings of Prevent have stated that is is “inherently flawed” and could end up “promoting extremism” instead of stopping it.

Cage deals with the fallout of poorly construed and enacted anti-terror legislation on a daily basis. We come across primary school children and their parents who are questioned by police officers for a mispronounced word, for wearing T-shirts with Arabic writing, or for reading the Quran, or teenagers searching for religious and political direction.

The people come to us, we digest what they tell us and inform wider society. So, while there are individuals and bodies that are far larger and more influential than Cage, we are the ones who have to relate what we see and hear.

The community sees just how hard the government tries to block our voice and hinder our work - and that is why they trust us.

Like Javid, we fought racists on the streets of Britain when we had to. Unlike him, however, we continue the fight after such people have donned suits and entered politics. We hope one day he’ll understand.