Will Aleppo become the capital of a new Caliphate?

Edward Dark
This once tolerant, secular, multi-confessional nation will soon become home to two of the world’s most violently fanatical statelets 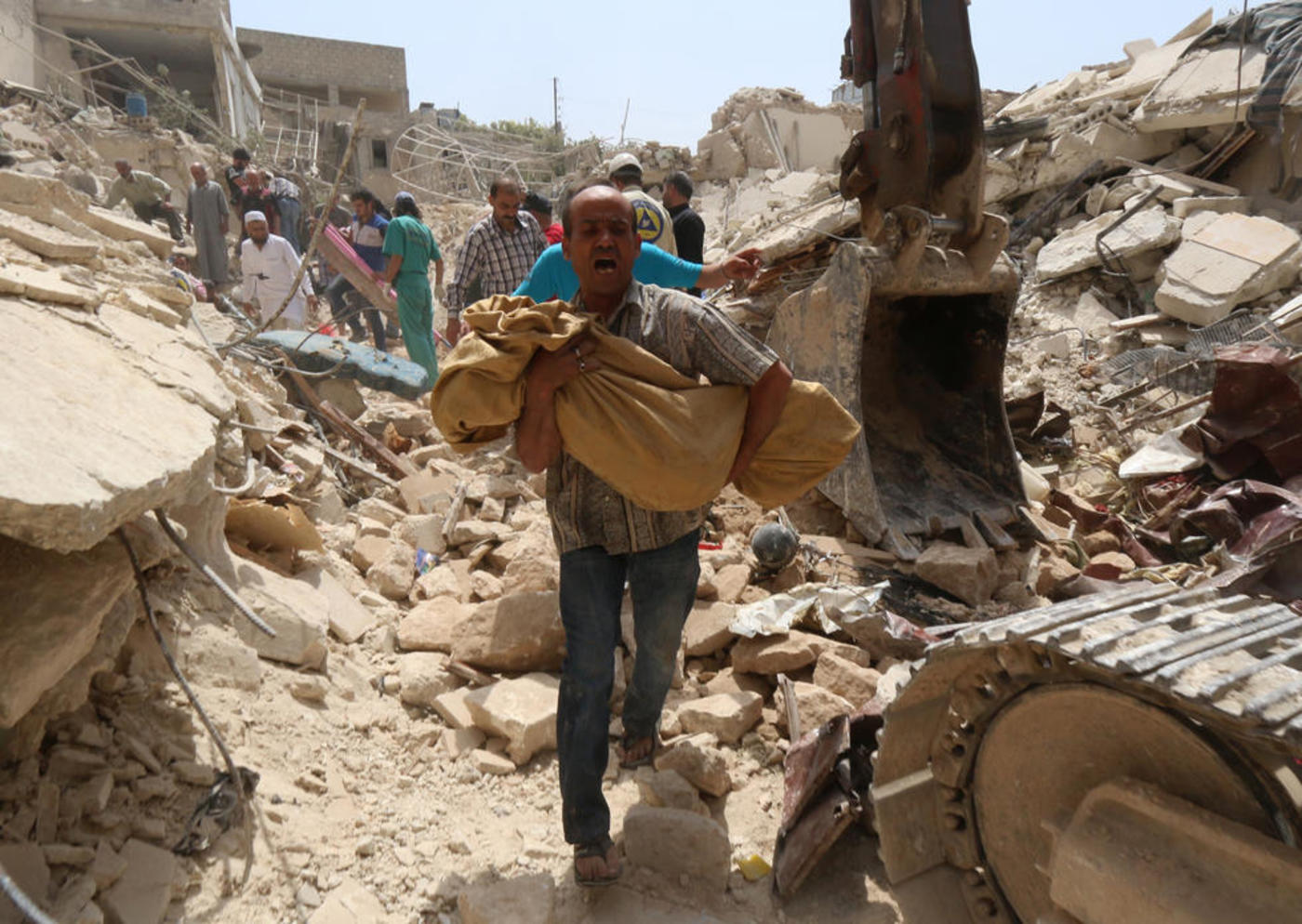 Throughout most of its history, Aleppo had been a city-state, or a capital for surrounding territory in what is now North Syria and parts of south Turkey. There are strong indications now that this ancient city may once again assume this role, but this time around in a far more sinister way.

The “mother of all battles” is what a looming showdown in Aleppo is being called, as revitalised Islamist rebel forces fresh from victories in nearby Idlib are preparing to mount an all-out offensive in the next few weeks to seize the remaining part of the city under government control. The stakes couldn’t be any higher - no less than the fate of the Syrian nation hangs in the balance - and the final lines of division might be drawn here.

The plan, drawn up by the insurgency’s three most powerful regional backers - Turkey, Saudi and Qatar - is to overrun the entire northwest of Syria and create a rebel controlled “safe zone,” and through direct military intervention prevent the Syrian regime’s aircraft and missiles from targeting it, thereby essentially setting up a de facto mini state.

To that end, there has been unprecedented cooperation and coordination between those powers who have put aside their rivalries and differences after King Salman of Saudi assumed the throne. This effort has seen them pour enormous financial, logistical and military resources into setting up what is called the “Fatih Army” or the Army of Conquest, and controlling the flow of its battles directly through an operations room in Turkey as well as intelligence officers on the ground. This was given the go ahead by the US, which under pressure from those allies again seems to have flipped its priority in Syria from battling the Islamic State (IS) to regime change.

It is worth mentioning that after almost a year of US-led coalition bombing, IS has continued to expand and grow, and now controls half of Syria and a third of Iraq. US policy here, as many had foreseen, is a confused and muddled disaster.

If the name of the Fatih Army sounds ominous, then its composition is even more disturbing, being made up primarily of al-Qaeda’s affiliate Jabhat al-Nusra, as well as other hardline Salafi jihadist groups like Ahrar el-Sham. This army has already “conquered” most of Idlib province, and is looking to go for Aleppo next.

That there is global apathy towards an al-Qaeda army  - backed and sponsored by the Western world’s predominant Middle Eastern allies - preparing to take over Aleppo and possibly establish another caliphate similar - albeit hostile - to its neighbouring Islamic State, is very indicative of what the Syrian crisis has come to after four years.

This once tolerant, secular, multicultural and multi-confessional nation with a diverse society and rich heritage will soon become home to two of the world’s most noxious, extremist and violently fanatical statelets. In their wake, all of Syria’s non-Sunni Muslim inhabitants are being ethnically cleansed and displaced. Predictably, this is what happened in Idlib after it fell to the Fatih Army, which saw all of its Christians abandon their homes and flee to government-controlled areas, to little media attention. This will undoubtedly happen in Aleppo too, which has a very large Christian population comprised of various denominations, including ethnic Armenians.

Leaders of the Christian community here have sounded the alarm, and warned that after surviving for countless centuries in one of the first lands inhabited by ancient Christians, their presence here might be coming to a final end. Again, the absence of any media concern about this impending calamity is very telling.

The backers of the insurgency have now dropped any pretence of “moderate” rebel groups fighting the Syrian regime, and have almost completely ditched and sidelined the umbrella opposition in exile which they for so long touted as the “legitimate representatives” of the Syrian people. In their stead, we now have an al-Qaeda army preparing to “liberate” north Syria.

Gone are all those grand slogans along with the “moderate” rebel groups we have heard so much about in the news, who after all these years proved to be little more than incompetent and corrupt profiteers. Those groups disintegrated, many of their former fighters joining the extremist jihadist groups who also seized their sophisticated US supplied weapons.

This rebel farce of course was well known to us Syrians, but was never a newsworthy item. We’ve always known that the only effective insurgents on the ground were the Islamists and the jihadists, and that the others were there for show, for the camera crews and media consumption. Maintaining this image no longer seems to be a concern however. After failing to convince Nusra to “rebrand” and ditch its ties with al-Qaeda, The Fatih Army was formed as a more palatable and purely cosmetic media-friendly cover name.

This is what the nations who claim to back the Syrian people’s aspirations for freedom and a democratic inclusive state have deemed fit to unleash upon us. After failing to topple the Syrian regime for four years and realising there would never be any political compromise that would fit their goals, they have now decided to partition Syria and facilitate its partial takeover by jihadists.

It doesn’t seem that previous lessons have been learned, with Afghanistan being the prime precedent. You simply cannot deal with and hope to control the jihadi proxies that you are using to fulfil your military ambitions. Quite simply those groups don’t play by the rules, and will turn on you the first chance they get and follow their own ideologically motivated agendas. The repercussions of doing so have always been, and will continue to be, extremely dangerous and profound.

Al-Qaeda was first spawned by backing the same sort of Islamists against the Soviets in Afghanistan. The destabilising fallout is still being felt today, with subsequent manifestations becoming even more violent and extreme, culminating in the Islamic State. Let’s not forget that for many months at the beginning of the Syrian conflict, the precursor to what was to form the Islamic State’s Syrian division was an integral part of the Syrian insurgency named, yes you guessed it, Jabhat al-Nusra. When the “bad al-Qaeda” went rogue, the very powers that today back the “good al-Qaeda” started to bomb it, and to little effect. It is now just a question of when, not if, Nusra becomes the “bad guys” and have to be bombed.

Needless to say, the majority of Syrians refuse the partitioning of their nation and its takeover by extremists under any pretexts. But that this pretext should be “freeing them from tyranny and oppression” is yet another sad little irony in the black comedy that is Syria’s conflict.

This is felt especially acutely in Aleppo, whose helpless people have endured years of a deadly stalemated war that has killed many of them and destroyed all they held precious. It now seems they must again dread the day they will be “conquered” and “liberated” as it would likely mean the loss of what little they still have left of their city, and what little hope they still hold for the future.

In all likelihood, Aleppo becoming the capital of yet another caliphate would see the majority of its inhabitants abandoning it in droves, and the complete loss of its religious minorities, hence its unique character and identity.

The people here are bracing themselves for the worst, for a momentous battle ahead. The outcome of this battle is by no means a foregone conclusion though, as Syria’s ambassador to the UN has warned in no uncertain terms that Aleppo is a red line, which once crossed would see the escalation of the conflict to other nations. Whether these words are empty and mere rhetoric remains to be seen and depends largely on what the regime’s prime backer, Iran, decides to do.

This month is a very sensitive time for Iran, as it prepares to sign a historic nuclear agreement while regional tensions are soaring. While the ball is now squarely in its park with regards to Syria, it may choose to delay its move until the picture becomes clearer.

Speculation is rife that along with the nuclear deal, regional issues are being hammered out too. Could it be that Iran would accept the partitioning of Syria as long as it gets to keep a majority Shia and Alawi “protectorate” along the coast? Or is it sticking to its guns and thwarting the planned “mother of all battles” in Aleppo by demanding it be stopped, or threatening a serious escalation if it isn’t? How will the flow of war and proxy showdown in Yemen affect Syria?

The coming weeks will tell, and they will be some of the most difficult the people of Syria and Aleppo have seen yet.

Photo: A Syrian man carries a body after it was removed from the rubble of buildings following a reported barrel bomb attack by government forces on the Qadi Askar district of the northern Syrian city of Aleppo on 20 May (AFP) 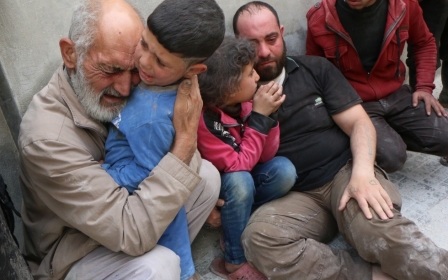 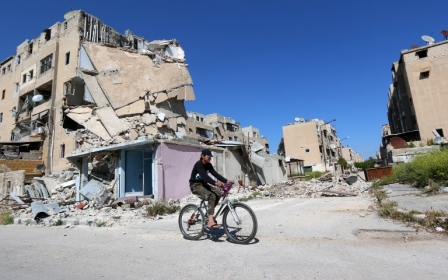 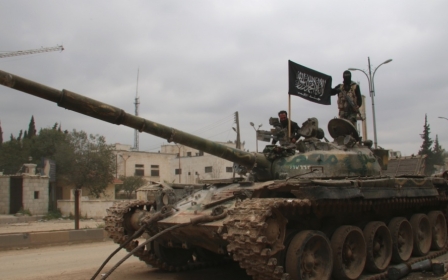