Iran petrol protests: Why war could be the only way out of US sanctions spiral

Shahir Shahidsaless
The dollar's dominance of world trade has made sanctions against Iran all the more lethal, leading to economic pain and a huge budget deficit An abrupt decision by the Iranian authorities to hike petrol prices as part of efforts to confront the effects of crippling US sanctions sparked demonstrations in cities and towns across the country. According to Fars News Agency, which is affiliated with the Islamic Revolutionary Guards Corps (IRGC), “the degree of destructions was more extensive than during the 2017-2018 protests.”

At least 12 people have been killed - so far - and, according to Fars News Agency, 100 banks have been set on fire and more than 1000 protestors arrested. In the last three days, the country’s internet shutdown has disconnected Iran from the rest of the world.

The crackdown has been harsh. The country’s economic downturn threatens not just the administration but the establishment as a whole. Now, the question becomes: which direction will Iran take?

A year ago, on the orders of President Donald Trump, the US reimposed all sanctions that had been lifted “under the disastrous Iran nuclear deal”.

Iran has been gradually stepping away from the landmark nuclear pact, while adopting a controlled regional destabilisation policy

European nations rushed to provide Tehran with a lifeline to circumvent US sanctions. Surprisingly, European governments did not appear to have a clear vision of the dynamics of world capitalism.

In free market economies, governments are not in a position to dictate to the private sector to trade with a country, in this case Iran, especially when private companies are threatened with penalties for doing so. Trump had previously tweeted: “Anyone doing business with Iran will NOT be doing business with the United States.”

The US uses the weight of its economy and its currency, the de facto global currency, to dictate its foreign policy. As of the first quarter of 2019, the US dollar made up almost two-thirds of all central bank foreign exchange reserves.

According to the World Bank, of the $86 trillion of the world’s GDP in 2018, $20 trillion belonged to the US against $19 trillion for the whole EU. The US dollar is on one side of almost 90 percent of foreign exchange transactions around the world and accounts for two-thirds of international debt.

With such dominance, it was unlikely that European governments could convince their banks, financial institutions, oil companies, trading houses and manufacturers to work with Iran. Iranian Oil Minister Bijan Zangeneh has said that the US “reached diabolical maturity with regards to smart sanctions”. The EU efforts were doomed to fail.

In a glaring example of the reach of US power, a deal for Iran to buy Russian-built Sukhoi passenger jets collapsed because more than 10 percent of the parts were sourced from the US, meaning the deal would need consent from an arm of the US Treasury.

So far, the US has been able to nullify the collective efforts of EU members to provide Tehran with an instrument to bypass US sanctions. The US success has in part been thanks to Reza Zarrab, the Iranian-Turkish gold trader who, during his trial last year, revealed in mind-boggling fashion how he orchestrated the largest sanctions-evasion scheme in modern history which let Iran bypass US sanctions.

It is not likely that Trump will be able to force Iran to retreat and return to the negotiating table, especially with the 2020 presidential election just around the corner

Iranian Foreign Minister Mohammad Javad Zarif said in 2018 that with the arrest of Zarrab, America “has identified our respiratory tract”.

In response, Iran has been gradually stepping away from the landmark nuclear pact, while adopting a controlled regional destabilisation policy, aiming to force the international community to step in and put pressure on the US.

The Iranian government aims to make the US understand that imposing sanctions comes with a cost. The Iranians have downed a US drone and are accused of complicity in the recent missile attacks targeting Saudi airports and oil facilities.

Iran, according to Armed Forces Chief of Staff Major General Mohammad Bagheri, has been providing “advisory and intellectual assistance” to Yemen’s Houthi rebels, who are at war with a Saudi-led coalition. The US aimed to control Iran’s “destabilising” behaviour, but the region is now significantly less stable.

The US has miscalculated the situation. Secretary of State Mike Pompeo said in November 2018 that he was “confident” Iran would not opt to restart its nuclear programme. Yet, Tehran has resumed uranium enrichment at its underground Fordow plant, which under the nuclear deal, was to start no earlier than 2031.

A Democratic president could reverse Trump’s decisions. His potential impeachment is also looming, although it seems unlikely that it will lead to his removal from office.It is not likely that Trump will be able to force Iran to retreat and return to the negotiating table, especially with the 2020 presidential election just around the corner.

While polls pull us in different directions, for incumbent presidents, the economy has historically been the key driver of election wins. Moody’s Analytics suggests that Trump will win reelection easily in 2020 if the economy holds up. “The modeling has been highly accurate going back to the 1980 election, missing only once,” according to CNBC.

If Trump is re-elected, what will Iran do? One theory is that the Iranian government, despite its radical and revolutionary rhetoric, has repeatedly shown that it compromises under pressure. Iranian President Hassan Rouhani, in response to Trump demanding negotiations, has repeatedly said: “Negotiations with sanctions doesn’t make sense.”

But let us not forget that Iran heavily negotiated under sanctions with the US administration during President Barack Obama’s tenure, leading to the historic nuclear deal. The final version of that deal violated almost all the red lines drawn by Iranian Supreme Leader Ayatollah Ali Khamenei.

In the most recent obvious retreat, Iran did not leave the nuclear deal in reaction to Trump’s move, although Khamenei had threatened that “if they tear [the deal] up, we will set it on fire”.

Is a war on the horizon?

Other observers argue that during negotiations with the Obama administration, the Iranian government, in exchange for temporary limitations on its nuclear programme, gained what the country had sought for a decade: the right to uranium enrichment at an industrial level.

Proponents of this theory maintain that Iran will under no circumstances accept a merely decorative nuclear programme, and if Trump is re-elected and pressure keeps mounting, Iran will abandon the nuclear non-proliferation treaty, or NPT, altogether. 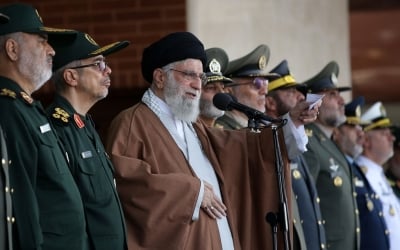 Meanwhile, the Iranian government will continue to destabilise the region through its proxies, with a recent report from the International Institute for Strategic Studies noting that Tehran “has tipped the balance of effective force in the Middle East in its favour by countering superior conventional forces with influence operations and use of third-party forces”.

Meanwhile, the country cannot tolerate endless sanctions. Iran’s reaction to the US "maximum pressure" policy largely depends on the depth of the economic crisis which it faces. Until 12 November, that was open to guesses and speculations.

On that day, Rouhani made a statement unprecedented from a high-ranking official in Iran. He said “the country is not in normal conditions". He added that “for running the country” the government needs 450,000 billion tomans [Iranian currency, or $106bn] next year. “The highest amount that we forecast we can collect in taxes is 150 thousand billion. Where can we get the 300 thousand billion from? The main revenue that runs the country is oil.”

This explains why the government made the risky decision of raising gas prices.

Iran does not want a large-scale conflict. That said, a limited war that could create an international crisis and raise tensions in the region - driving oil prices very high - could be the only solution as long as Trump is in office.

Iranians know how important low oil prices are to the US and its allies. Major General Yahya Rahim Safavi, the supreme leader’s military adviser, has said: “The first bullet fired in the Persian Gulf will push oil prices above $100. This would be unbearable to America, Europe and the US allies like Japan and South Korea.” 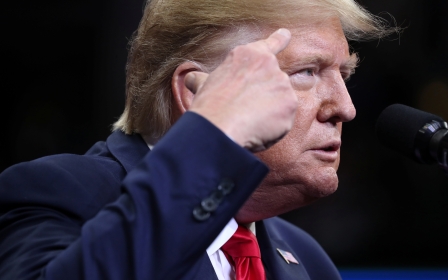 Trump
Is Trump pulling out of the Middle East?
David Wearing