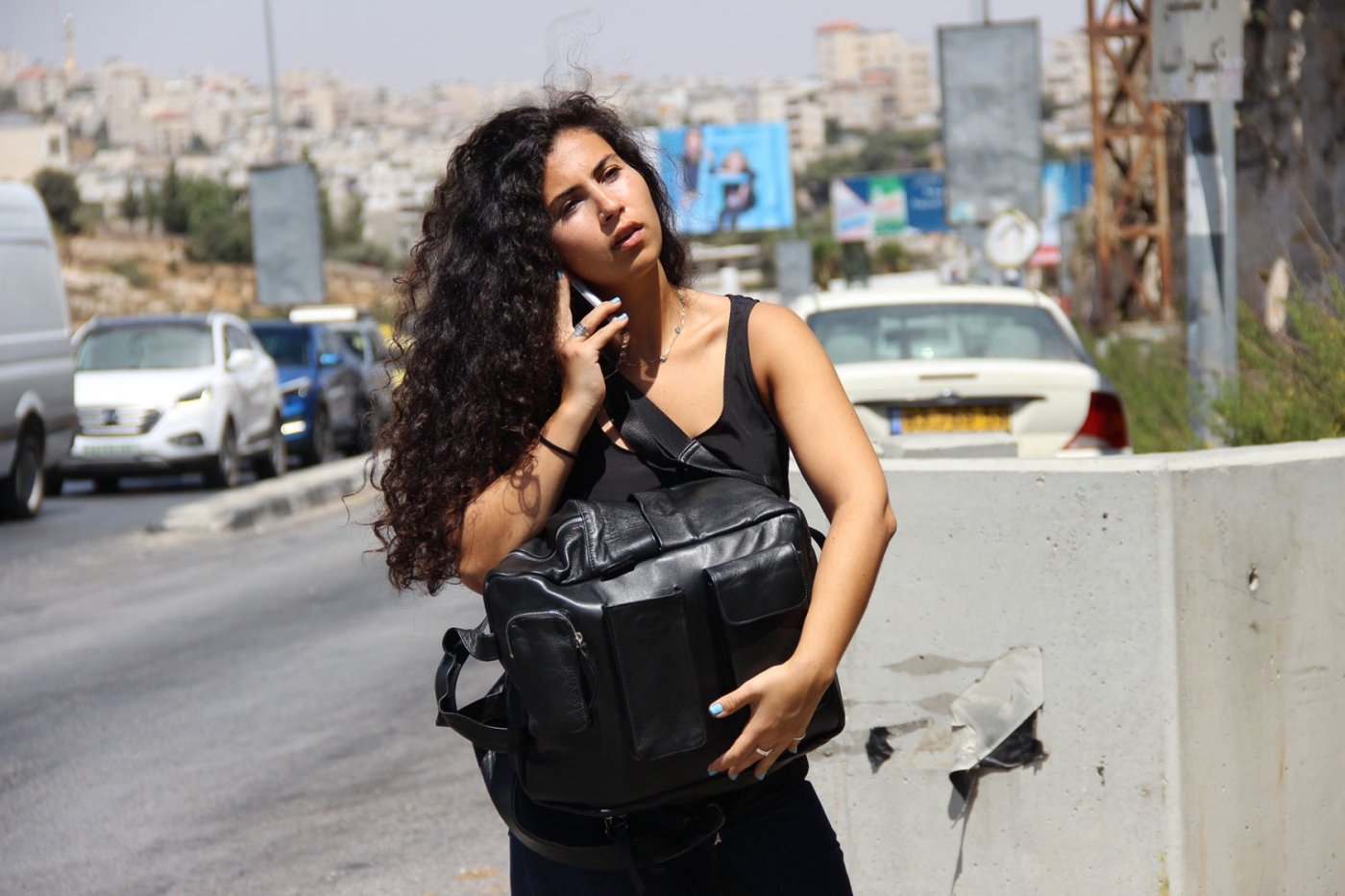 While on the outside it may just look like a well-constructed leather backpack with plenty of pockets, the reality is that the "checkpoint bag" is purposefully designed to have a much bigger impact and narrate the struggle Palestinians face on the ground.

The product is just one of the many on sale at Disarming Design from Palestine (DDFP), an independent Belgium-based non-profit label.

The brainchild of Dutch designer and researcher Annelys Devet and Palestinian artist Khaled Hourani, the platform was launched in 2012 with provocative and "disarming" designs entirely made around Palestine, including the West Bank, Gaza, Jerusalem as well as in a refugee camp in Jordan.

Devet, who volunteers as coordinator of a small team that facilitates DDFP’s operations from her studio on a big farm on the outskirts of Brussels, says that the intention behind the brand was to showcase Palestinian talent and also raise awareness on the plight of Palestinians.

Designs with a twist

“We wanted to start a design label because there is an incredible artistic production in Palestine. What it often lacks are international networks or platforms to amplify the Palestinian narrative,” Devet tells Middle East Eye.

“Artisans, designers and artists rethink local products and give them a small twist so they tell something about the current reality in Palestine,” Devet says.

The designs, mostly by local but also by some international talents, are contemporary and based on old manufacturing techniques.

The traditional products and the contemporary designs - toys, bags, cushions, scarves, jewellery, decorative items and many more - have one thing in common: they tell the story of daily life in Palestine and open conversations about what locals have to endure daily.

From Palestine, through Belgium, to the world

The products have already reached people around the world, relaying the struggle of Palestinians to people who may otherwise have no idea about the derogatory experiences they face under occupation.

Once the product is ready, it is shipped to Belgium, where DDFP takes care of the packaging, distribution and sales worldwide. It is sold online, and in pop-up locations, markets and museum shops in Amsterdam, Eindhoven, London and Sharjah. The biggest sales are in Belgium, Holland, the UK and the USA.

'We manage to get things out but it always comes at a cost. Production and logistics are not cheap'

The platform is currently looking for other thought-provoking spaces to sell its designs.

However, the process isn’t always smooth sailing. If producing under occupation is challenging, shipping from Palestine has its rough patches too. Most shipments are arranged on an individual basis.

Artist Mohamed Abusal, who is also the DDFP coordinator in Gaza, sends most of the products by DHL. Other products like metal earrings or a piggy bank made with clay from Gaza are difficult to export.

“What really helps are informal networks. When foreigners go to Gaza or the West Bank they sometimes bring back products, in suitcases and bags,” Devet explains.

“We manage to get things out but it always comes at a cost. Production and logistics are not cheap,” Devet adds.

The proceeds go to the craftspeople and the designers, who are paid directly but also to development and operation costs such as shipping, packaging and promotion.

While the sale of the products have so far been successful, Devet says that success is also the resonance the designs make, through their participation in exhibitions, media and the educational and development aspects that come with the process.

A bag to ‘ridicule’ the occupier

Born and raised in Jerusalem, designer and architect Areej Ashhab wanted the world to understand how stifling Israeli checkpoints are and how they restrict the freedom of movement for Palestinians daily.

Tens of thousands of people living in the West Bank cross military checkpoints by foot daily to work, school, or hospitals or to visit relatives.

Squeezing into overcrowded cage-like lanes, queues often start to form as early as three in the morning. In the packed lines, “they get their belongings searched and their bodies scrutinised every time they pass,” Ashhab recounts. The harrowing and dehumanising experience can last a few hours, depending on the commuter's ID.

An opportunity arrived in 2015 during a workshop organised by DDFP in Jerusalem. Ashhab co-designed, with Monika Grutze and Florian Mecklenburg, a black backpack that reflects this intricate situation.

Completely handmade in the Jelld factory in Hebron, the Checkpoint bag is waterproof and made of high-quality leather. Ashhab also included “easily accessible outer pockets that allow the users to put their belongings in different compartments before they enter the x-ray scanners”.

It also features an extra cushioned back for the comfort of the person waiting in line and offers different carrying possibilities so that it can be easily turned while moving through the checkpoints.

In the prototype of the bag, it was designed to have hidden metallic shapes of the "right of return" keys, which were only visible on the Israeli soldiers' monitors. The intentional design choice was seen as a way of symbolically defying the occupation.

The bag is also designed to make a statement. “It is a storytelling design narrating the struggle faced not only by Palestinians but can relate to the experience of refugees fleeing conflicts globally too,” Ashhab says.

The Checkpoint Bag is not the only product detailing the plight of Palestinians to a global audience.

Another item inviting customers to think about how the Israeli occupation impacts lives is the colourful stitched "Awakening Goggles", an eye mask made by female artisans in the Khan Younis district of Gaza. Each artistan embroiders their own eyes on the mask.

The masks have embroidered eyes on them, and since most of the artisans have never been able to leave Gaza because of the Israeli siege on the strip, the mask symbolises being allowed to see beyond the borders they have been confined to.

Gaza has been under the Israeli-imposed air, land and sea blockade since 2007, resulting in the densely populated area suffering from constant water and electricity shortages, restrictions on movement, and imports of goods. The Strip is surrounded by heavily fortified concrete walls and double-wired fences, with only certain people with special permits allowed to leave.

“The mask can travel and it will prevent people abroad to turn a blind eye when it comes to the situation in Gaza,” de Vet tells MEE. “It is a critical but also a very poetic product. If we put their eyes on we see nothing, we keep our eyes closed.”

Amongst the other products are also traditional items, such as the keffiyeh, which has become a symbol of resistance. The keffiyeh is made at the Hirbawi textile factory in Hebron, one of the only factories still producing the scarf locally.

There’s also Nabulsi soap on sale, which has been made in the city of Nablus since the 14th century, renowned for being completely natural and relying on traditional manufacturing methods.

Instead of giving a new design to the soaps, the team decided to keep it just the way it is.

“It is so perfect as it is, in the way it is made, the way they deal with the product, the natural ingredients used, with almost no machines, so manual and it takes time. We had to keep it as it is,” Devet says.

Another "disarming" story is the one behind the measuring inequality cup, by Dutch designer Mirte van Duppen in collaboration with British designer Helen Underhill. Produced in the Jaba glass factory, the transparent measuring container shows the unbalanced division of water between the West Bank and Israel.

Filled to the top, it shows the 300 litres that Israelis consume per day on average. The middle line represents the amount of water recommended by the World Health Organisation per person per day (100 litres). The bottom one is average amount of water that Palestinians can consume on average per day per person (73 litres), although the water consumption for thousands of Palestinians in the West Bank is as low as 20 litres per person a day.

In Gaza, around 90 to 95 percent of the water supply is contaminated, rendering it unfit for human consumption.

“The cup has no traditional measurement values to reflect the fact that many Palestinians rely on water tanks that are refilled irregularly and have to choose between washing dishes and a shower,” the designers say.

Since the launch of the designs, many of them, including the backpack, have gone viral, prompting people to ask whether design can be political.

Ashhab believes that designs are always political, through their use of materials, technology, use and even logistics.

“The power of design is its capacity to tell a story through daily use,” the designer explains.

“The bag was made to tell the story of people who live between borders and are scrutinised for every move they make. It restores agency to people over their bodies and belongings."

Recently Ashhab decided to change the name of the bag to BlackSac in order not to normalise the checkpoint experience, and focus instead on the conditions Palestinians are forced to live with.

“It aims to become a symbol of the right to freedom of movement in Palestine,” Ashhab explains.

“We don't want to make products that are related or connected to the architecture of occupation. So Ashhab freed the bag from that,” Devet adds.

Instead of just working with local artisans to manufacture and sell products, DDFP organises regular workshops, or "create-shops", as they like to call them, for people around Palestine.

The create-shops bring together Palestinian and international designers, allowing them to meet, work on new ideas and draft up future designs.

The sessions have become instrumental in not only working on new products, but also showing solidarity with Palestinians in the face of occupation.

During the Disarming Design summer school of 2019, organised in collaboration with the Palestinian Museum in Birzeit, local designer and ceramist Jessica Azizeh realised how design can “contribute to the Palestinian struggle.”

She is currently working on two products. PalestTime is an irregular hourglass that distorts time and makes it unpredictable. “Distortion of time is something that all Palestinians experience on a daily basis because of checkpoints, permits, papers, longer routes, blockades,” Azizeh explains.

Fold Back Home is a picnic blanket that folds into a backpack that can easily carry food. “It contains pockets for ingredients for a Palestinian breakfast. Sharing food is at the heart of Palestinian culture.”

Together with the designers who developed these products during the summer school, Azizeh is transforming the prototypes into final products. She also meets with the artisans to supervise the production. “The artisan's perspective is always interesting. Together we try to discuss every little detail. Their expertise, knowledge and techniques improve production,” Azizeh adds.

Today, the project has become self-sustainable thanks to minimal overhead costs, volunteer work and some donations. It has grown into an inspiring and flexible platform that, despite the grueling conditions, defies oppressive power structures in a disarming manner.

Heritage
Threads of identity: The historic fashions of women in the Middle East and North Africa
Fashion
In pictures: Aziz Bekkaoui on fashion, the keffiyeh and resistance
Fashion
Couture designer uses fashion to call for an end to the plight of Uyghurs 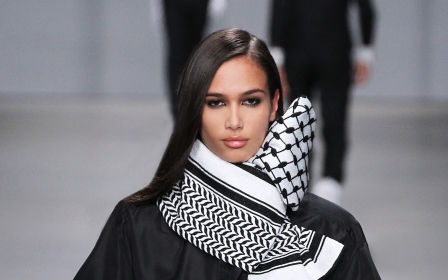 Fashion
In pictures: Aziz Bekkaoui on fashion, the keffiyeh and resistance 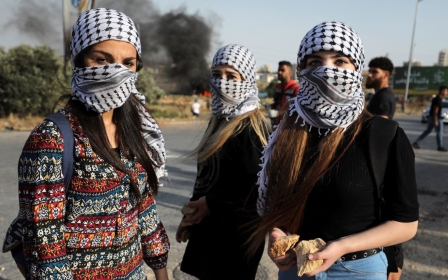 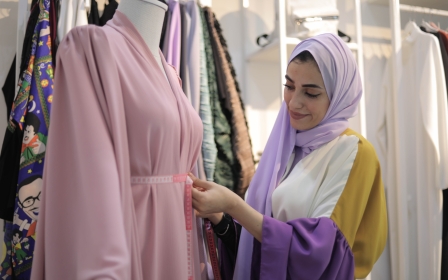 Fashion
In pictures: Meet the Palestinian fashion designer shaking up the industry despite Gaza’s blockade