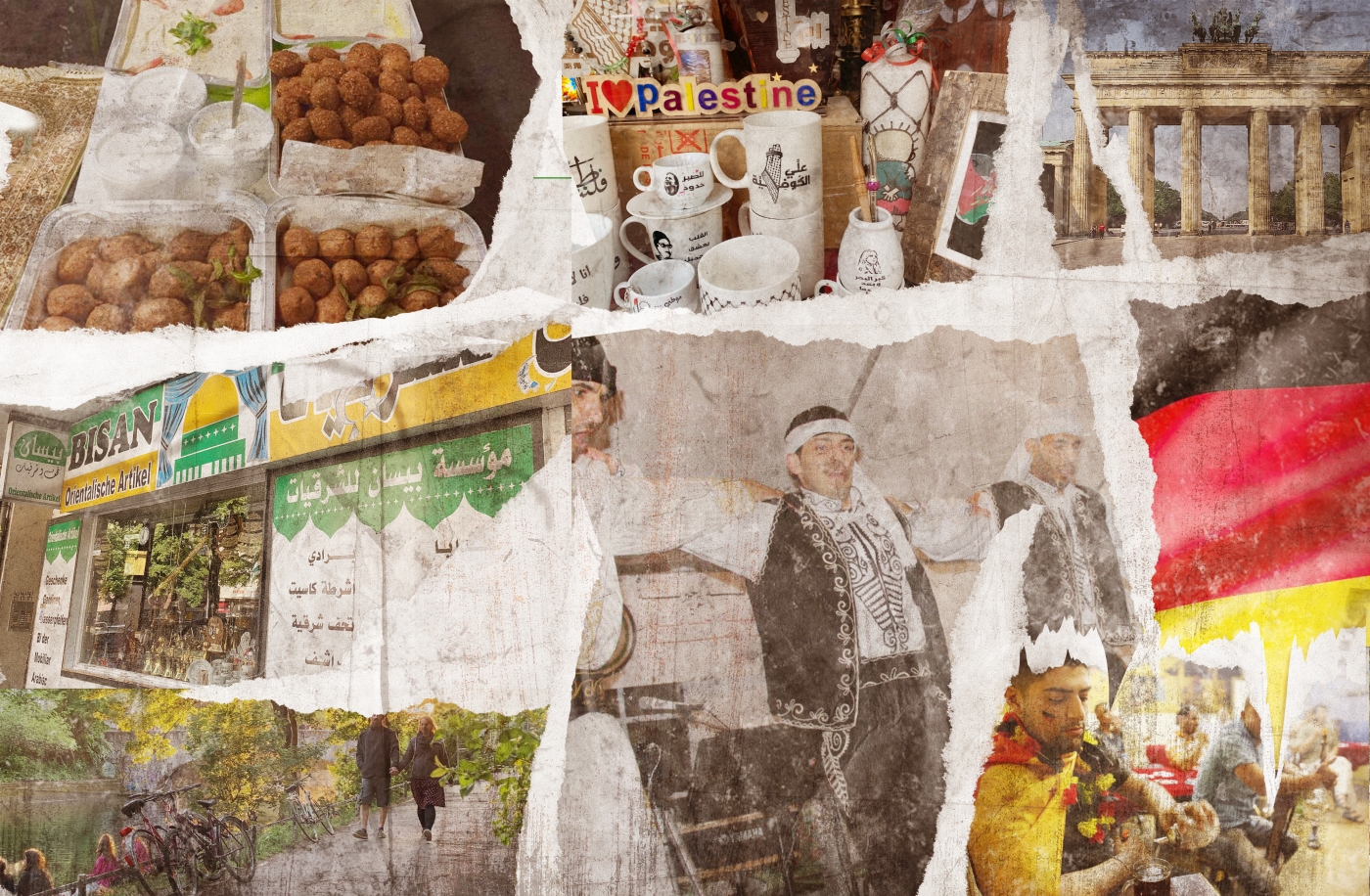 Palestinians in Germany have established a large community, and members are keen to hold onto and preserve their heritage (Illustration/MEE)
By
Matt Unicomb
in
Berlin

In the south of Germany’s capital, a Palestinian community centre has survived the gentrification of what was for 30 years a run-down array of shops and pubs left in disrepair.

Located in the Neukoelln neighbourhood of Berlin, Al-Huleh was set up in 1995 as the city’s first Palestinian society and since then it's been the first point of call for thousands of Palestinians and other Arab migrants new to Berlin.

'In Germany, Palestinians are completely marginalised from cultural life, politics and public spaces'

Al-Huleh’s founders, some of whom are now dead, included Germany’s earliest Palestinian migrants, who first arrived as students and medical trainees in the early 1960s. It wasn’t until the 1975 outbreak of the Lebanese Civil War that Palestinians began arriving in large numbers. Until then, the Palestinian population was a few thousand.

Most Palestinians in Germany trace their arrival to the 1970s, when Germany was split into the capitalist west and communist east, and most are now in areas located in the former West Germany.

While Berlin has the largest Palestinian population by some margin, other centres include Munich, Hamburg and Frankfurt, all city’s in Germany’s west.

In a similar pattern, almost all other migrants from Turkey, North Africa and the Middle East resettled and remained in the west of Germany. Migrants to the one-time East Germany were typically from fellow socialist states like Vietnam, Angola and Mozambique.

Today, although the community centre’s roots are in Palestine, it has opened its doors to all, and sees Arabs from all over the region gather there.

Origins of the community

“This organisation was established to help with the first steps in Germany, to meet people and show them how things work here,” Abu Nader, one of Al-Huleh’s founders, tells Middle East Eye.

“Earlier, we had a lot of events, with dabke, food and dancing. Now we mostly help members navigate German bureaucracy or with legal issues. Sometimes we give relationship counselling, too.”

These days, the Palestinian Diplomatic Mission in Berlin estimates that there are over 100,000 people of Palestinian descent residing in Germany, including over 25,000 in Berlin alone. But because Germany does not recognise Palestinian as an official nationality, most remain unrepresented in government statistics.

Of the roughly one million migrants from countries like Syria and Iraq who resettled in Germany between 2015 and 2017, thousands were stateless Palestinians. They, too, remain uncounted.

Today, it’s not uncommon to hear people say, “I’m from Iraq, but I’m actually Palestinian” during introductions on the first day of German class in one of Berlin’s language schools.

The Al-Huleh community centre is a 20-minute walk from Sonnenallee, the bustling heart of Neukoelln and Berlin’s Arab community.

This iconic four-lane road is about five km-long, but its best-known section comprises around 10 blocks at its northern end, where hungover Swedish ravers queue for falafels under Palestinian flags hanging out of first-floor apartments. A few doors down, local teenagers might be passing around a shisha pipe outside an open-air cafe.

It’s easily the most colourful part of Berlin, where the German language takes a backseat to Arabic. Of the dozens of Arab-owned and operated businesses in and around the streets, many were founded by Palestinians.

At the Palestinian-run Al-Sham grocery store, A4 print-outs in Arabic urge customers to secure their order from the next shipment of premium olive oil from Palestine. The minimum order size? Eighteen litres.

Some Palestinian-run business are easy to spot, like the stores selling “I Heart Palestine” scarves and trinkets next to miniature statues of Che Guevara. Others are less obviously Palestinian, like Azzam, one of the most popular restaurants on Sonnenallee, where French tourists sit next to Syrian families hunched over giant shared plates stacked with shawarma and falafels.

The presence of Palestinians in Berlin extends far beyond the packed streets of Neukoelln.

Seven kilometres to the west in the quieter Schoeneberg district, the Arabic bookstore Khan Aljanub is co-managed by Fadi Abdelnour, a Palestinian from Ramallah who has been an active feature of Berlin’s cultural scene for decades, including as a curator at the annual Arab Film Festival up until a few years ago.

Then there’s AL Berlin, a cafe, bar and sometimes-nightclub in Kreuzberg, also co-founded by a Palestinian, Muhammad Jabali, an illustrator and DJ from Jaffa. At AL Berlin, Palestinian film students serve glasses of Arak to Tunisians while DJs from around the world spin everything from house to Moroccan hip-hop and African electro to crowds that get rowdier as the night goes on.

Palestinians are also part of mainstream cultural German life beyond the relatively niche worlds of underground music and independent cinema. Massiv, one of Germany’s best-known rappers, is the son of Palestinians who fled the Lebanese Civil War.

Malcolm Ohanwe, a prominent journalist seen as one of the faces of a new, more diverse Germany, was born in Munich to a Palestinian mother and Nigerian father.

'Tabooisation' of the Palestinian identity

But even with this rich cultural impact, Palestinians in Germany are often reduced in German media to a single political entity: hostile opponents of Israel, a state that Germans shouldering historical guilt for the Holocaust feel compelled to outspokenly support.

As many Palestinian writers have discussed, their mere presence is confronting to many Germans, something once dubbed the “tabooisation” of the Palestinian identity.

In Berlin, Sawsan Chebli, the daughter of Palestinian asylum seekers, was a prominent former legislator in the Social Democratic Party until 2021.

In North Rhine-Westphalia, the fourth-largest of Germany’s 16 states, Jules El-Khatib is the top spokesperson for the Left party (Die Linke), and the son of a Palestinian taxi driver.

At Al-Huleh, the cosy Palestinian community centre in Neukoelln, vice chairperson Samira Tanana is parliamentary leader in the neighbourhood’s faction of the Greens, a position she uses to advocate for migrants like her Palestinian parents, who fled to Berlin from the Lebanese Civil War in the 1970s.

With a degree in social pedagogy, Tamira has spent most of her adult life advocating for migrants and other minorities.

She is the first generation in her family, who fled Palestine in 1948, to have been born in Germany. She grew up speaking both German and Arabic. She now makes an effort to pass the Arabic and Palestinian sounds and flavours of her youth to the next generation of Palestinian-Germans, including her daughter.

“I want to give her our folklore,” Tamira says. “But it’s more than just music, singing and dancing, but also traditional clothing and embroidery.“

As part of the cultural life of Palestinians in Neukoelln, the first edition of a month-long series of events was underway.

Saot Festival, put together by a trio of Berlin-based Palestinians, was billed as an “interdisciplinary festival for solidarity with Palestine and intersectional struggles,” and is part of a growing wave of Palestinian activism and discourse in Berlin.

The programme comprised a mix of screenings, panel discussions, readings and concerts from Palestinian filmmakers, artists and theorists. There was also a cooking workshop, where participants were taught how to perfect classic dishes from different regions of Palestine.

“We wanted to create a space that brings Palestinians together,” Nour Safadi, one of the event’s organisers, tells MEE. 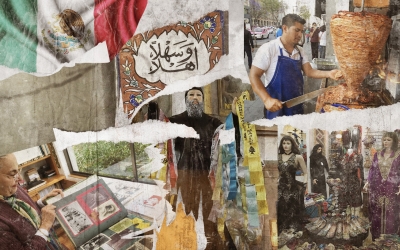 'Our souls are split into two': Inside Mexico City's Arab community
Read More »

“In Germany, Palestinians are completely marginalised from cultural life, politics and public spaces, so we needed a platform for Palestinians to present their art.”

Safadi, 27, is a Palestinian born and raised in Syria, who came to Germany alone and stateless in 2016. He is now a German citizen planning a visit to Haifa, the city his grandfather fled during the 1948 Nakba. It will be his first visit to Palestine, made possible by his new German passport.

Like some other Arab states, such as Lebanon and Iraq, Syria’s Palestinian refugees and their descendants are rarely granted Syrian citizenship.

This leaves them stateless for decades, even after several generations. Until moving to Germany, Safadi lived his whole life in Syria, but his residency status was as a Palestinian refugee.

This, he says, could explain why he and his Palestinian collaborators are so determined to represent their identity in Germany, their new home.

“Ever since we’ve been kids, we’ve always been told we should resist,” Safadi says. “In Germany, we’ve reached a point where we have to talk. We can’t be silent.”

This article is part of a series on Middle Eastern communities around the world. 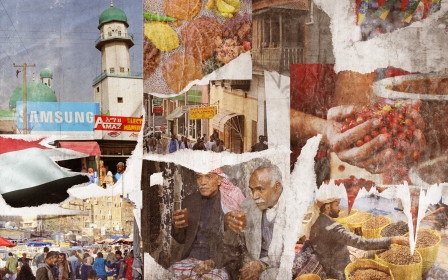 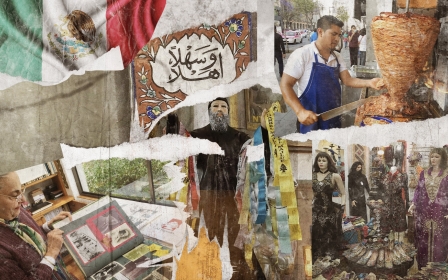 Culture
'Our souls are split into two': Inside Mexico City's Arab community 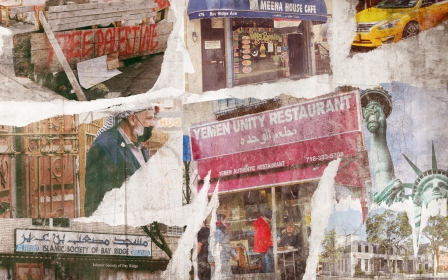