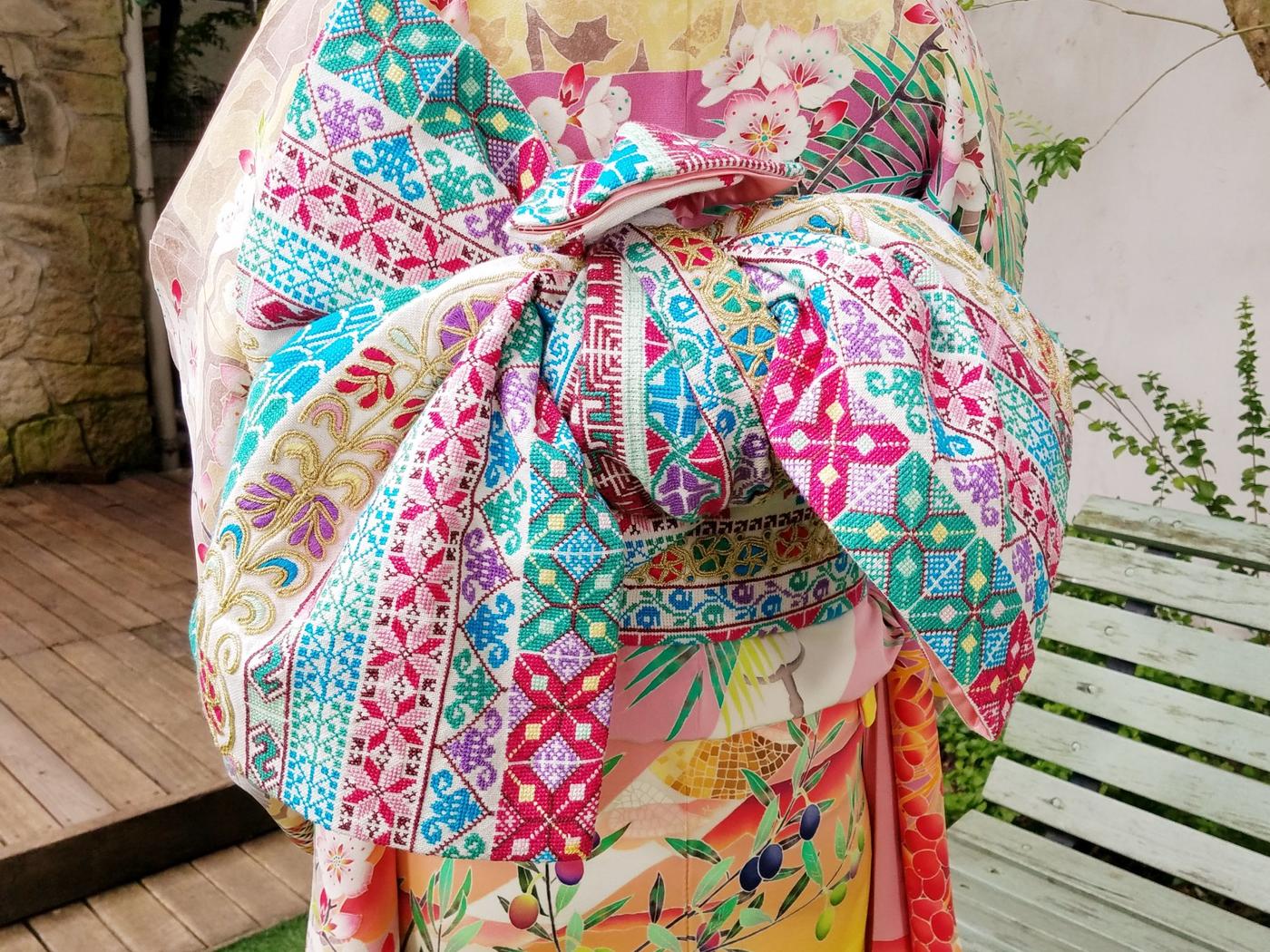 Maki Yamamoto has spent the last eight years trying to reframe how Palestinians are seen in her native land of Japan.

Her weapon of choice is the Palestinian Embroidery Obi Project, which fuses the traditional Japanese obi, a wide fabric sash wrapped around the waist to secure kimonos in place, and Palestinian embroidery, known as tatreez. The project is a collaboration between the Japanese designer and Palestinian women living in refugee camps in the occupied West Bank and the Gaza Strip, who hand stitch intricate designs into the obis.

Although no one is willing to disclose how much is being paid, Yamamoto says, “They get paid the price they ask for. It’s a totally fair trade.”

Describing the process of producing the garments, “It all depends on the design,” she says.

“Obi with full tatreez can take five months to embroider. If tatreez is small, embroidery takes a month or so. After the tatreez is finished, the material is brought to Japan where a Japanese kimono tailor finishes the piece and creates the obi.”

Yamamoto set up the project after travelling to Palestine in 2013 as part of a cultural exchange trip organised by the Palestinian Authority.

“I have Palestinian friends living in Japan and we’ve known each other for over 15 years so I knew Palestinians have beautiful costumes and embroidery.

“But I decided to support Palestinian people after my first visit.”

Yamamoto, who is also a pharmacologist, says there is considerable sympathy for the Palestinian plight within Japan - at least relative to Western states.

The Japanese government officially supports a two state solution along 1967 borders, calls for a “fair” resolution to the Palestinian refugee issue and opposes Israel’s unilateral annexation of occupied East Jerusalem. According to Yamamoto, media sympathy in Japan also generally tilts towards the Palestinians.

Mohamed Shokeir, a contributing writer for The Arab, a quarterly digest on Japan-Arab relations says: “Shinzo Abe [former Japanese prime minister] has generally been sympathetic with the Palestinians and not the Israelis.

“Palestinians are seen as weak and deprived of their land by a more powerful, better armed people. So the Japanese have been more open and welcoming to Palestinians.”

Despite this sympathy for the Palestinian cause, it was Yamamoto’s visit to the occupied territories and her experience while there of the “resilience” and “warm hospitality” of the Palestinian people that made her want to turn sympathy into some form of direct action.

Yamamoto’s PhD at Tokyo's University of Agriculture and Technology, which she started after her visit in 2020,  focuses on Palestinian embroidery and the economic independence of Palestinian farmers and refugee women.

She says she wants to shine a “positive light” on Palestine and on Arab people more generally.

"It's a matter of basic human rights", she says. "Palestinians living in certain parts of the West Bank are surrounded by illegal Israeli settlements, and blockade of Gaza. They cannot work freely, they cannot live freely."

“Palestinian people and refugees are in a hard situation, but that’s not everything.

“Embroidery artisans in refugee camps create beautiful things despite severe living conditions. I wanted to show Japan the beauty and resilience of Palestine.”

In 2014, Yamamoto began collaborating with The Society of Inash al Usra (Revival of the Family), a Palestinian NGO, to identify embroiderers and artisans in the occupied West Bank to work with.

Since then she has visited Israeli-occupied Palestinian territories more than 17 times and now also works with Palestinian embroiderers in the besieged Gaza strip.

Dawlat Abu Shaweesh is one of thirty women from the Al-Amari refugee camp near the town of Al-Bireh, who having learnt the craft from her mother at the age of 10, hand stitches intricate crisscross designs onto the obi sashes.

“You have to have sharp vision to see, and you need patience, it’s difficult to do.

“For Palestinians, tatreez is our hawiyah, our identity. When you ask someone to hold up a photo ID card with their details, that’s what tatreez is to us."

'To know our tatreez will be taken to Japan, and through it they will know about our culture and history, makes me really happy' - Dawlat Abu Shaweesh, Palestinian embroiderer

Neither Abu Shaweesh nor Yamamoto see the tatreez obis as cultural appropriation, but rather a fusion of cultures. The tatreez is stitched authentically by Palestinian women who say they are paid well for their work, and who are proud to stitch traditional Japanese clothes with their nation's motifs.

Now 52, Abu Shaweesh says she is happy to share her Palestinian “culture and history” with Japan.

“I don’t know of anything that’s more beautiful than tatreez stitching, and to know our tatreez will be taken to Japan, and through it they will know about our culture and history, makes me really happy."

Once pandemic travel restrictions are lifted, Abu Shaweesh and a handful of Palestinian women will be travelling to Tokyo as part of a cultural exchange programme organised by Yamamoto.

According to Yamamoto, there is nothing novel about incorporating non-Japanese influences into kimono and obi designs. She explains that there is a long tradition of other cultures leaving their mark on the iconic Japanese dress and it is therefore “natural” to incorporate tatreez embroidery into the obi.

“I am familiar with traditional Japanese culture and the origin of the kimono, although today many aren’t and wonder how I came up with some of my ideas,” she says.

“The kimono has been influenced by neighbouring countries since the Silk Road era. Most kimonos are made with silk material and the silk weaving techniques came down from China.

“Many patterns or textiles from Silk Road countries have been used for kimono, like the popular ‘Blue Wave’ kimono pattern that originated in Persia.”

Yamamoto says Uzbek Suzani embroidery, Indonesian Batik and African printed fabric have all been used to transform the kimono and the obi with no objection from kimono wearers.

Mariko Akimoto is one such kimono enthusiast, with a collection of more than 20 obis, some plain and some with designs.

The Tokyo-based engineer received her first kimono when she was just three, and with her love for traditional wear cultivated by her mother, she soon started buying and collecting her own.

Kimonos were once worn as a daily outfit in Japan but are now usually reserved for special occasions.

The appeal of Yamamoto tatreez obis is not just limited to the design, the manner in which they are made is also attractive to potential buyers.

“I always try to choose ‘fair-trade’ fashion,” Akimoto says, which to her means clothes that have been sourced and made ethically.

An internet search for "fair-trade kimono" led her to the Palestinian Embroidery Obi Project, where she learnt about the tatreez emroidered obis.

She contacted Yamamoto to learn more about the initiative and bought the first of her two tatreez obis - a plain burnt orange sash woven along one side with a colourful tatreez design.

“The design appealed to me, but purchasing obi is not an easy decision because it’s not a casual price.

“But after I heard how the Palestinian women who stitched the obis were then able to put their kids through college, I was extremely impressed and I decided to purchase it.” The starting cost of one of these tailor-made tatreez obis is around $1,000 (¥108,000) and can sometimes be double that, depending on the design.

A second-hand cotton kimono with an obi belt included can cost as little as $10 (1,085 yen), with better quality ones - depending on the length and the quality of the fabric - costing up to $10,000 (1,085,000 yen), and bespoke designs surpassing this figure further still.

Akimoto says: “I’m not used to explaining what I wear to others, as I don’t like people to think I’m saying my clothes are more special than theirs.

“The tatreez obis are pretty unique, so when I’m asked about one of them I get the chance to explain how it was made, and how buying one supports women in Palestine.”