Love in a time of adversity: Mixed race marriages in Beirut

Marrying an Asian or African in Lebanon can bring out widespread racial prejudice, as two mixed families discovered 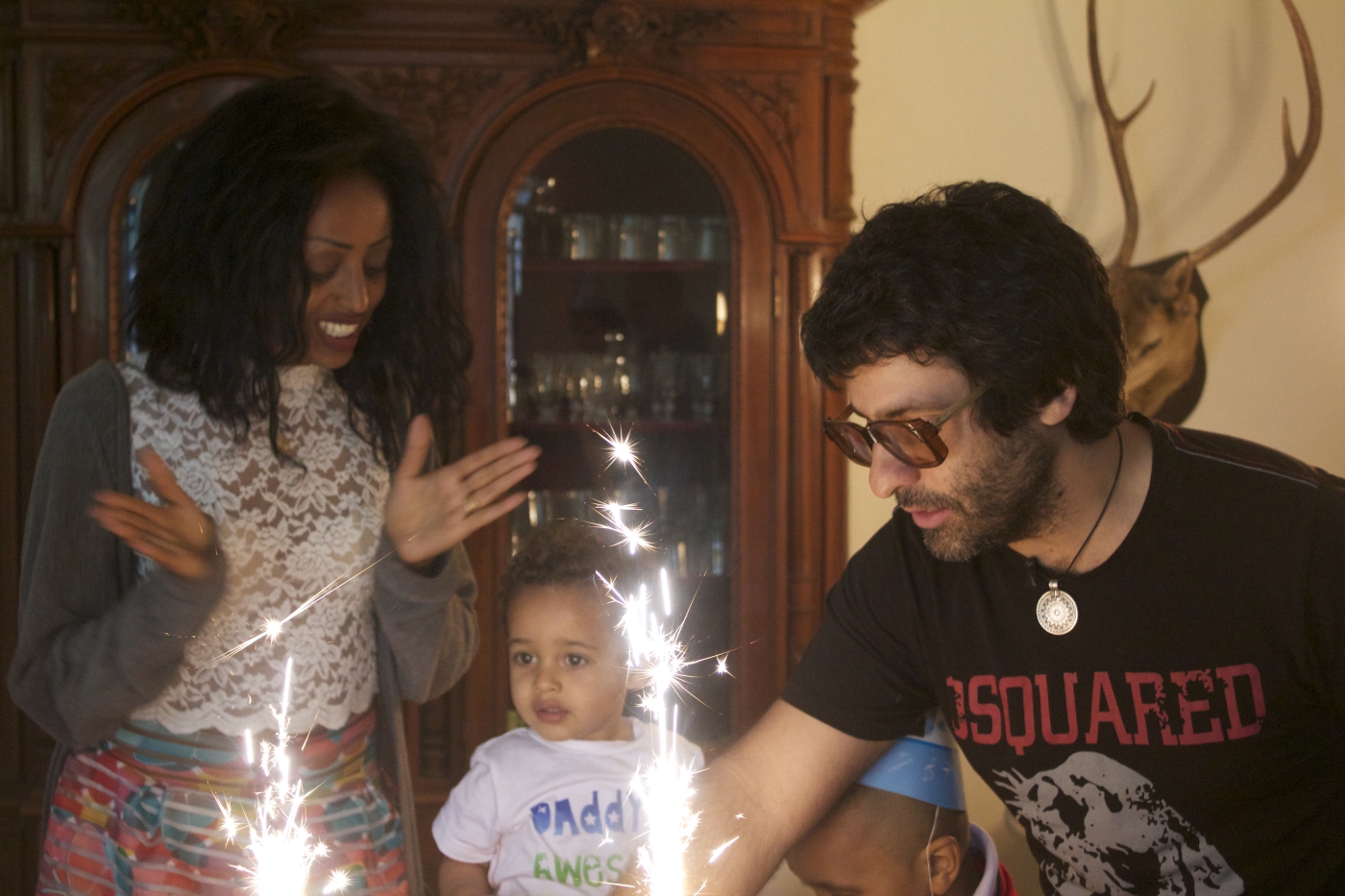 While Lebanon is famed for its hospitality, food and culture, it is also notorious for its commonplace racial prejudice. With no anti-discrimination law in place to protect people of African, Asian or mixed race descent, this issue is not going away.

Mixed marriages between Lebanese and Western nationals are frequent and are often considered to be a favoured match. Selim Halwani and his wife, however, have faced regular discrimination - she is a Filipina.

Selim, 50, spends 10 hours a day driving a taxi in Beirut's mad traffic, before returning to Imelda, 46, his Filipina wife, and their three children.

Imelda came to Beirut to work as a domestic worker, where relations between Lebanese bosses and employees from countries including Sri Lanka, Nepal, Ethiopia and the Philippines can often be antagonistic, exploitative and abusive.

Female domestic workers are governed by the kafala system that Lebanon shares with the Gulf countries, under which they are directly sponsored by their employers and lack protection under the country's labour laws. Reports of employers withholding wages, administering beatings or effectively holding maids hostage - as well as frequent suicides of maids driven to despair - are commonplace.

“I don’t like to say that my mum is Filipina,” Rita, 15, Selim and Imelda’s middle child confessed. “They tell me I am ‘not Lebanese,’ but I don’t tell them. I don’t like being called Chinese,” she complained. “It happens at school, anywhere, and it makes me sad. I keep the way the bullying makes me feel mostly to myself and I’ve learnt not to be racist. I don’t like making fun of anyone.”

The teenager is contemplating a career in translation or becoming a filmmaker, but not in Lebanon: “Lebanon is terrible! The garbage crisis... there’s no president... it’s a place where even with a degree you find no work,” she grumbled. “I like Italy and France and would like to discover Sri Lanka.”

Like her siblings, she loves her mother’s cooking: “My mum’s food is what I love most and that is what connects me to my mother’s culture.”

Francisco, 12, the youngest, loves maths and playing games on his phone. His exercise routine consists of “only 10 push-ups,” he said.

His mother tells him about the Philippines. Like many mixed individuals, he dreams of leaving Lebanon. “In the US there are no power cuts like the daily three-hour cuts here. The cost of living is high here. I don’t like anything in Lebanon,” he told MEE.

Unlike his sister, when he is quizzed about his distinctive looks or ethnic identity, he says his mother "is not from Lebanon, she is from the Philippines".

“In the new school so far only three pupils have asked but I am sometimes bothered,” Francisco admitted.

“Sundays, I go to St Nicolas Orthodox Church with my grandmother. It’s important for me to attend church,” Francisco said. To avoid questions and harassment, Francisco and his sister barely go out. Asked whether his friends would stand up for him, he replied: “My problems are not easy to resolve. My friends wouldn’t be able to help me.”

Imelda, who came to Lebanon in 1994, said: “I love my family, I’m happy with them but sometimes I’m lonely, I miss my family in the Philippines.”

Aged 26, Imelda met Selim, then 31, her future husband, in his taxi. She had run away from an employer and he helped her get free. “She didn’t want to be with me without getting married first,” Selim explained.

Their wedding picture, taken inside a church, hangs in their small lounge surrounded by religious iconography: a pretty bride in white, leaning against her husband.

The family is close to Selim’s parents, and Imelda praises her husband for being loyal and protective of his family. It’s not an easy task: “Discrimination is normal here. Bad characters come with bad minds.

"For my daughter and sons, they’ll understand when they are older. They are angry now, when someone taunts them saying, ‘This one looks like Jackie Chan.’ But what should they be ashamed of? Jackie Chan has a good body and a good brain! And there is a Miss Philippines that became Miss Universe. Those who say these things (to my children), they are insecure, they like to talk.”

Selim and Imelda have also faced their own challenges. “Our cultures are very different, that’s what we fight over,” he lamented. “Our horoscopes don’t fit, I’m a Sagittarius and Imelda is a Capricorn,” he said, Imelda imitating an archer and giggling. “I tell you we have been married for almost 20 years and she still doesn’t believe I love her! I love her more now than ever. When she travelled to the Philippines and was gone for 28 days, I counted the days until her return,” Selim said.

Selim and Imelda are by no means the only happily married mixed couple in Beirut. “I love her even more now,” Zeid Hamdan, 39, said of his Ethiopian wife Mekdas Widagi, 29. The pair met four years ago.

With Ethiopia’s thriving music scene, and an estimated 20,000 Ethiopians in Lebanon, there are surprisingly no Ethiopian bands in Beirut. Zeid scouted for a female singer and met Mekdas. “She couldn’t sing but we made a family,” he said with a smile. Their son Abel is now two and a half years old.

Once part of the iconic underground duo Soap Kills, Hamdas still challenges musical boundaries. He now does various collaborations with his band Zeid and the Wings or with leading Egyptian singer-songwriters Maryam Saleh and Maii Waleed.

Zeid’s fascination with African culture stems from six of his formative years spent in Paris. “School there was much more mixed, I had black classmates and through them I discovered black music, and the big difference between black and white culture. I love black culture - it’s positive, moving, powerful, and carries a beautiful vibe.

“I discovered hip hop, soul, blues and jazz, for example. I identify more with these genres of music than 'white' music, which lacks groove. Before being drawn to Africa I was seduced by African music. My parents know nothing 'black,' neither literature nor music.”

The music composer is unequivocal about a black influence having contributed to his success, notably mixing reggae with Arab music. “All that is black is despised, met with prejudice,” he conceded. However, Zeid was well aware of this and, although he had never wanted to get married or have kids, he got married when Mekdas fell pregnant and was worried he’d leave her.

“She’s lovely, she’s a beautiful woman. I told her: ‘I’ll protect you, I’ll be your husband’… Nobody within my circle of friends reacted negatively, it was more like: here you go again, having to be different from everyone else. They almost expect that from me now!”

They look at photos full of memories of weddings, parties, Ethiopian dinners and big nights out. In their own wedding photos, Mekdas is radiant in a teal dress. The lovebirds wed in Addis Ababa.

They are doting parents with Zeid posting clips of his son on Facebook in Addis, captioning them: "My best co-production.”

Abel’s parents share most parenting tasks. Later, doing the dishes, Zeid explains – in French – to his son the difference between big boys (they use toilets) and babies (they need diapers).

Family life consists of small, important rituals, such as communal breakfasts. “Once or twice a month now that he is in day care, I surprise Mekdas with a sushi lunch, which she loves.” Every couple of weeks they head out of town for a day.

“Some of my favourite places are Tyre and Byblos,” Mekdas said.

Albeit a comfortable home, Lebanon remains challenging and hostile for Mekdas, and at times even for Abel. When the couple applied for Abel’s passport, General Security refused to issue the document. So they decided to turn to the press. The publicity that followed helped resolve the situation.

“I don’t look for trouble, ever. I’m not a troublemaker,” the musician emphasised, referring to the time he was imprisoned for defaming the president in 2011. Public pressure helped to get him released. “It is effectively a feudal system,” he concluded.

As in the Gulf states, this translates into a quasi-official ranking system where Filipinas will consistently fetch higher wages than, say, Sri Lankan or African migrant workers. So, for example, families set on employing a domestic worker who do not have unlimited means would therefore not ask for a Filipina maid but would employ an Ethiopian or West African woman.

Not surprisingly, Mekdas is also somewhat disillusioned by the country. “I love Lebanon but not the people,” she told MEE. The vitriol she has experienced over the past decade since coming to Beirut at age 19 to work as a domestic worker has not improved "even with time, a child and a Lebanese husband," she said.

“I tell her not to get affected by it,” Zeid said. “All women here dream of getting out … It’s so hard here and in my wife's case it is race and gender she has to contend with. In the Arab world, lip service is paid to gender equality but de facto, it does not exist.”

“The greatest richness in life, the only thing that is of value, is friendship and family. You need to be loved and supported, as this makes you happy, it makes your world.”