Navigating Ramadan spirituality during a pandemic 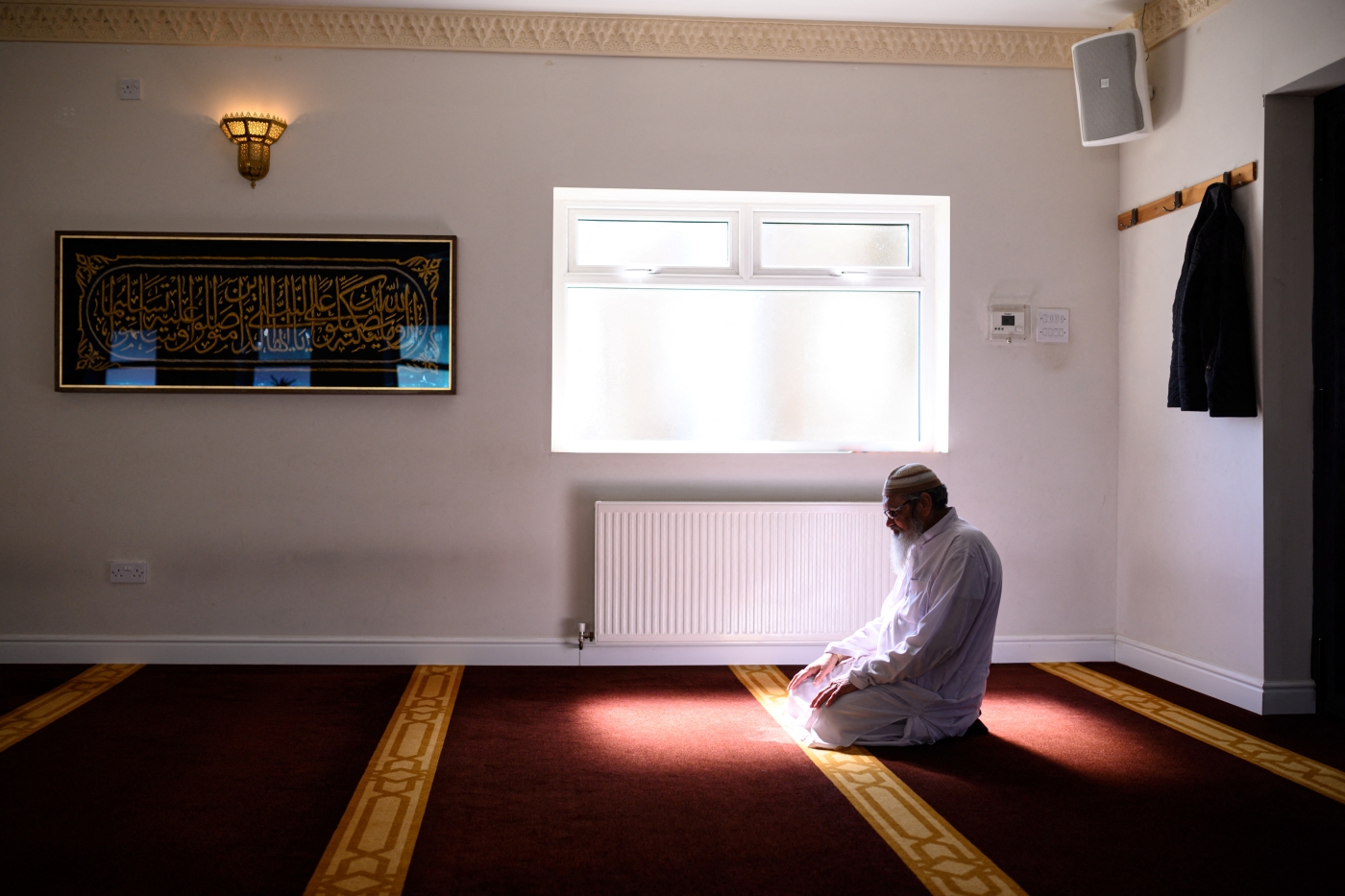 For many, it’s a time to take a break from the norm, switch things up and try to find a stronger spiritual connection.

Giving up food and water, the most basic of provisions, during daylight hours in an effort to achieve a more spiritually conscious state, is just one of the changes made.

But worship in Islam also includes congregational prayers, meaning Muslims usually spend more time gathered in mosques during the month than at any other time of year. Or at least that was the case before the coronavirus pandemic and the lockdowns implemented to tackle it.

For the second year running the pandemic has cast a shadow on the observance of Ramadan.

“The main thing stopping me is the safety aspect,” says Haseeb Sadiq, a recruitment consultant from Manchester, who used to visit the mosque after breaking his fast and attended the voluntary evening tarawih prayer every year until the start of the pandemic.

While he understands the importance of abiding by measures to combat the coronavirus, he says the absence of normal traditions this year has left him feeling that something is lacking.

“When you opened your fast there used to be a big urge to go (to the mosque) and there was an atmosphere about it. Without that, it feels like something is missing.

“But now, you open your fast and that’s it. No urge to go and pray. The routine is no longer there. I miss it and many others I know feel the same.”

That feeling of something being amiss is especially pronounced towards the end of Ramadan.

Efforts to increase religious observance climax during the last ten nights of the month, driven by the belief among the faithful that their prayers might coincide with the “Night of Power”, the moment Muslims believe the Quran was revealed to the Prophet Muhammad.

There is no certainty over the precise timing of the night, so the entire final ten-day period of the Muslim holy month is the focus of intense worship. One aspect of that worship is the practice of seclusion within the confines of the mosque,  a practice known as itikaf.

Another is qiyaam al-layl, in which worshippers stay awake in mosques reciting the Quran and performing extra prayers.

Since social distancing measures mean mosques cannot function as normal these practices have been severely disrupted for the second year running.

For Sadiq, the loss occurs on multiple levels. Firstly there is the social aspect; the inability to reconnect with people he would mostly see at the mosque and to partake in acts of worship, such as the tarawih prayer, with his father. The second is spiritual disruption.

“The mosque on those nights was packed and there was something special particularly on the 27th night (Night of Power).

“The mosque was full every night, there was a sense of camaraderie and being able to listen to the recitation of the Imam."

Shaykh Mohammad Yazdani Raza of the London Fatwa Council says the absence of such spiritual practices can impact the faithful.

Many use the last ten nights of Ramadan as an opportunity to seek forgiveness for their sins and try to start their spiritual lives afresh with a stronger connection to their faith. As congregational prayers and prayers in mosques are two significant elements of Islamic worship, making up for their absence has been a challenge for the devout.

“Reward is increased in congregational worship,” Yazdani says, adding: “Prayer in a mosque has a high value, this is why spiritually a lot of people have been feeling anxiety and distress because they were used to praying in congregation and believing there is a multiplied (spiritual) reward.”

Nevertheless, scholars like Yazdani argue that Islamic theology prioritises public safety over an individual's access to specific forms of worship and that alternatives are always an option.

“We need to remember that this is a time of excuse on the basis of the greater good and safeguarding other people,” the Islamic scholar says, suggesting alternatives such as finding a quiet place to pray within the home.

But it's not just the pandemic that has changed Ramadan. The advance of technology also poses new problems for theologians to mull over, such as whether the concept of communal prayers can be extended to online meeting platforms, such as Zoom.

According to Yazadani the applications are already used when it comes to online sermons but congregational prayers are a separate issue.

“Religion is not against modern technology to bring people closer, but the Eid and Friday prayers cannot be done at home,” he said.

There are opposing opinions on the leading of prayers via Zoom, the religious leader says, adding that the danger is that people will stop coming to the mosques eventually if the virtual option is allowed.

While the experience of Ramadan without the communal aspect has been difficult for many, for others coronavirus restrictions have given the month a unique character that has made it a more spiritual experience.

Spending the month under social distancing conditions has created an opportunity for inward reflection and an increased level of spirituality, says Chourouk Gorrab, the co-founder of The Spill, an online publication working with contributors from marginalised communities.

“I always had that sort of FOMO-feeling (fear of missing out) during Ramadan every year because I don't get to live certain experiences during that time. But because everyone was literally forced to stay at home, I felt more at peace with myself and my personal experience through it,” she says.

Having fasted alone for the last ten years away from her family in France, Gorrab says that she found lockdown-induced solitude brought her closer to her culture and strengthened her spirituality.

“I started following more influencers on social media from the Muslim community and have been trying to read the Quran, which I’m always struggling with. I also recently downloaded an app that allows me to keep track of fasting times, listen to the Quran, and more.”

For Yosra Koura, the spiritual element of Ramadan is impacted less by the practicalities of worship in mosques and more by other aspects of the pandemic.

The newlywed from Cairo is spending her second Ramadan in a non-Muslim majority country after arriving in London in 2020.

“It was super challenging,” Koura says, because “everything I had counted on in terms of routine was completely stripped.”

Initially, she had no idea where she could buy Arab groceries in London so she could make food from back home. Even a planned visit by her mother, who was going to bring Ramadan trinkets, such as a traditional lantern, got cancelled due to pandemic-related travel bans.

While Koura has managed to read the Quran during the month, she describes her experience this year as the “the worst Ramadan” of her life.

Personal circumstances have played a significant role in Koura’s experience. As well as being new to the UK, her husband is on the frontline of the battle against the virus because he works as respiratory consultant. This means she is surrounded by constant reminders of pandemic, even at home.

The sudden absence of religious routine can take a toll on the mental health of worshippers, according to London-based psychotherapist Maya Salaam.

“Those who have found a space in the home to pray have done OK, but those who have not been able to do that have suffered from anxiety, depression and sadness.”

She says the issues are more apparent in men because they are not able to go to the mosque as normal. The break in spiritual routine and the resulting sense of absence means they have to mourn and grieve that loss.

“Nature has a way of making us feel good and this also has a spiritual impact. When you feel good it can help strengthen faith”

“There is a desperation and an underlying sadness that can lead to depression,” Salaam says.

“There has to be more care and understanding as a result because it’s a mourning and we can’t downplay that.”

Importantly, Salaam is keen to stress to believers that spirituality need not exist exclusively within the confines of a mosque or in communal worship.

"Nature has a way of making us feel good and this also has a spiritual impact. When you feel good it can help strengthen faith."

She encouraged people who may be feeling depressed to go outdoors and be around trees and animals as this can counter the effects of depression, Salaam says.

"It can pull someone away from sadness and towards life.  It's almost like an artistic way of thinking but it actually has a huge impact on us"

For those feeling anxious, Salam recommends spending time around still water if possible, a lake for example, as the calmness of the water can positively change the state of mind.

She says it is important for everyone's mental health to focus on hope in times of hardships such as this pandemic and urges those who may be struggling to try to find time for reflection.