Palestinian solidarity has been on full display throughout the tournament, with fans hoisting the country's colours and condemning Israeli occupation 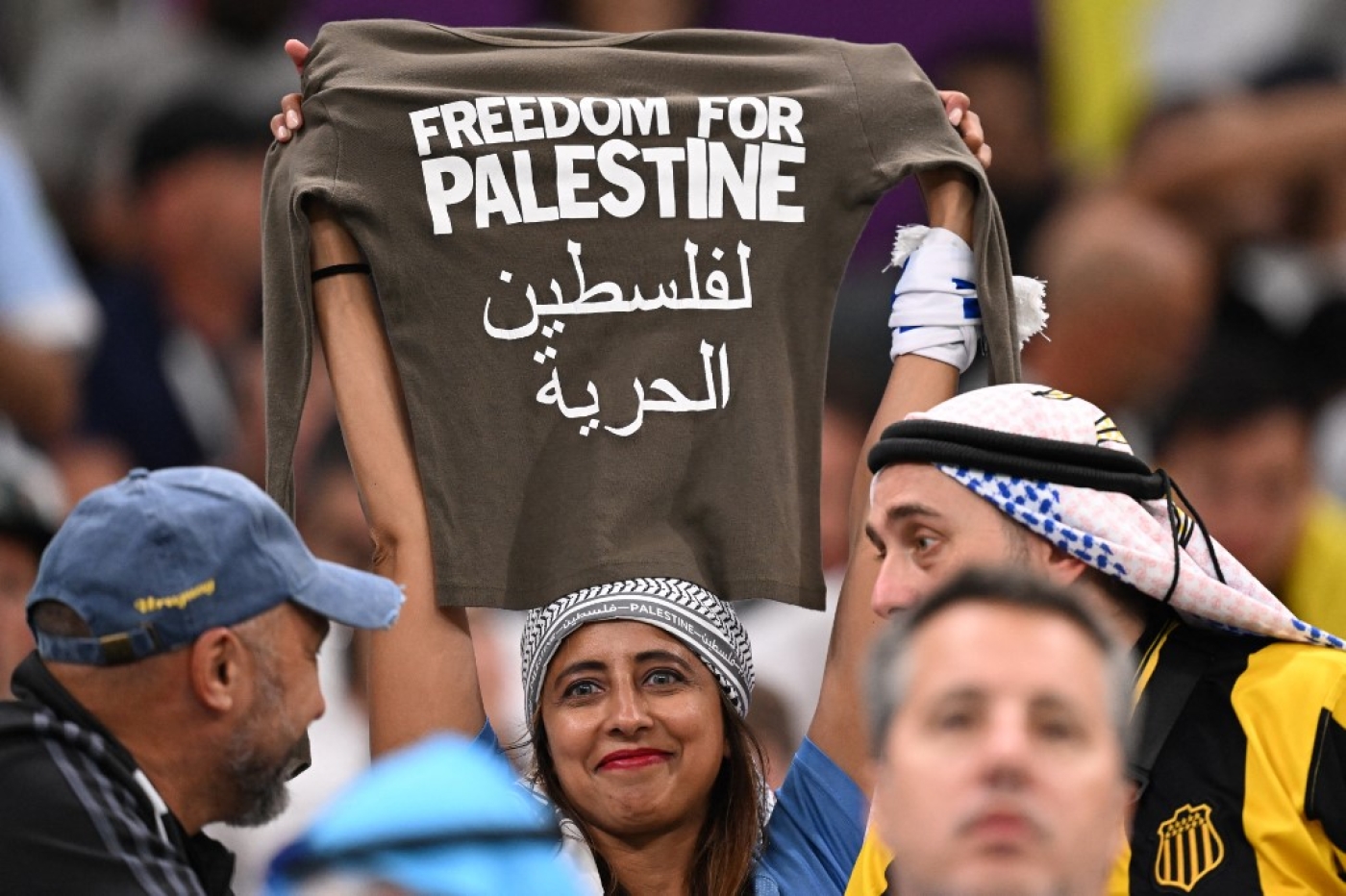 The Palestinian flag is everywhere.

In stadiums, markets, restaurants and the metro - the red, white, black and green flag has been a ubiquitous presence at the first World Cup tournament to be held in the Middle East.

Despite the occupied territories not qualifying for the Qatar World Cup, social media has been awash with videos of fans waving the Palestinian colours and refusing to speak to Israeli TV.

The outpouring of support has been striking considering some Arab countries normalised relations with Israel just two years ago.

Here, we take a look at seven moments the Palestinian cause centred prominently at the tournament.

When Morocco beat Spain in the round of 16, all eyes were on the team as they celebrated. However, it was the Palestinian flag that was pulled out to mark the victory, closely followed by the national team's own flag.

Moroccan striker Abdel Razzaq Hamdallah carried the Palestinian flag with pride as he waved it in front of the ecstatic fans.

It was a pointed show of solidarity by the Atlas Lions, who have been enjoying their moment in the limelight.

Morocco made history again when they sent Portugal crashing out of the tournament in the quarter-finals. Moments after the euphoric moment the team huddled on the pitch around the Palestinian flag.

Congratulations to #Morocco 🇲🇦 the Arabs and Africa for being qualified for the half-final of the .

Palestine 🇵🇸 present more than ever in the World Cup. #Morocco pic.twitter.com/I3h3rqo8o2

Midfielder Abdelhamid Sabiri also draped the Palestinian flag over his shoulders to mark the win, posting the photo to Instagram with the caption "freedom".

Tunisian fans used their match against Australia to shed light on the Nakba.

The Nakba refers to the forced displacement of Palestinians from their homes in 1948 at the hands of Israeli militias, in order to make way for the creation of Israel.

During the 48th minute of the match, fans unfurled a large "Free Palestine" flag. Fans were seen waving the colours, while others adorned themselves with the keffiyeh, which has come to represent Palestinian solidarity, over their shoulders.

4. During interviews with Israeli media

Arab fans have repeatedly snubbed Israeli journalists after finding out where they were from, and have frequently hoisted the Palestinian flag behind TV reporters and shouted "Free Palestine".

Arab football fans are refusing to speak to Israeli reporters during the Qatar World Cup in solidarity with the Palestinian cause.

Some fans also waved the Palestinian flag behind reporters pic.twitter.com/oGlMPb98jw

Israeli officials had voiced hope that US-brokered normalisation deals with the UAE and Bahrain in 2020, and later Sudan and Morocco, would spur further normalisation, including with Arab heavyweight Saudi Arabia. However, on the ground, fans made clear their rejection of normalisation with Israel and their support of Palestinian rights.

Early on in the tournament, the Palestinian flag was unfurled by a group of Qatar fans during the Netherlands-Qatar match.

WATCH: A group of Qatar fans hoisted a banner featuring the Qatari and Palestinian flag motifs with “Free Palestine” on it during the Netherlands-Qatar World Cup match.

Throughout the tournament, fans have been showing solidarity with Palestine in various ways. pic.twitter.com/czy2etlvJh

The clip went viral online, with many social media users praising the Qatari fans for standing in solidarity.

The fans could also be seen chanting: "We sacrifice our souls and blood for Palestine" repeatedly in a chorus which echoed around the stadium.

Martin Near, an England fan, has won hearts around the world when he bellowed "Free Palestine" during an interview with an Arabic TV channel.

With his face painted with St George's cross and England the flag draped over his head to look like a ghutra, Near had no idea that the interview clip would go viral.

The fan was commended for standing up for Palestinian rights and was hailed as a hero by Palestinians and human rights activists around the world.

This is killing me pic.twitter.com/1MvbQhD92X

"St George himself is a Palestinian, an important fact people miss out," he told Middle East Eye.

The former marketing executive also said that after previously visiting Palestine, he left feeling a "terrible sense of injustice".

7. Celebrations around the world

Around the world, celebrations of fans waving the Palestinian fan have gone viral.

In Qatar, fans came together to chant for Palestine, meanwhile in London, Morocco's spirited win against Portugal turned into a rally for Palestine.

Other videos, such as one showing fans marching with the Palestinian flag in the Moroccan capital, Rabat, have since gone viral. 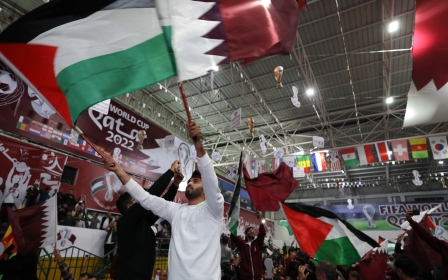 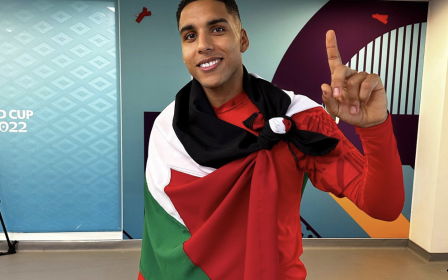 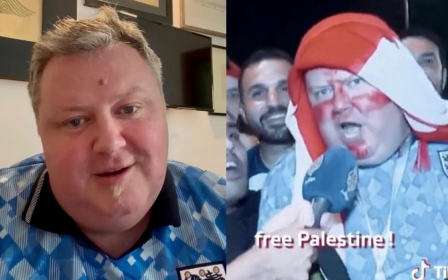