‘We are arrested’: How an explosive story led Can Dundar to jail, exile - and a play 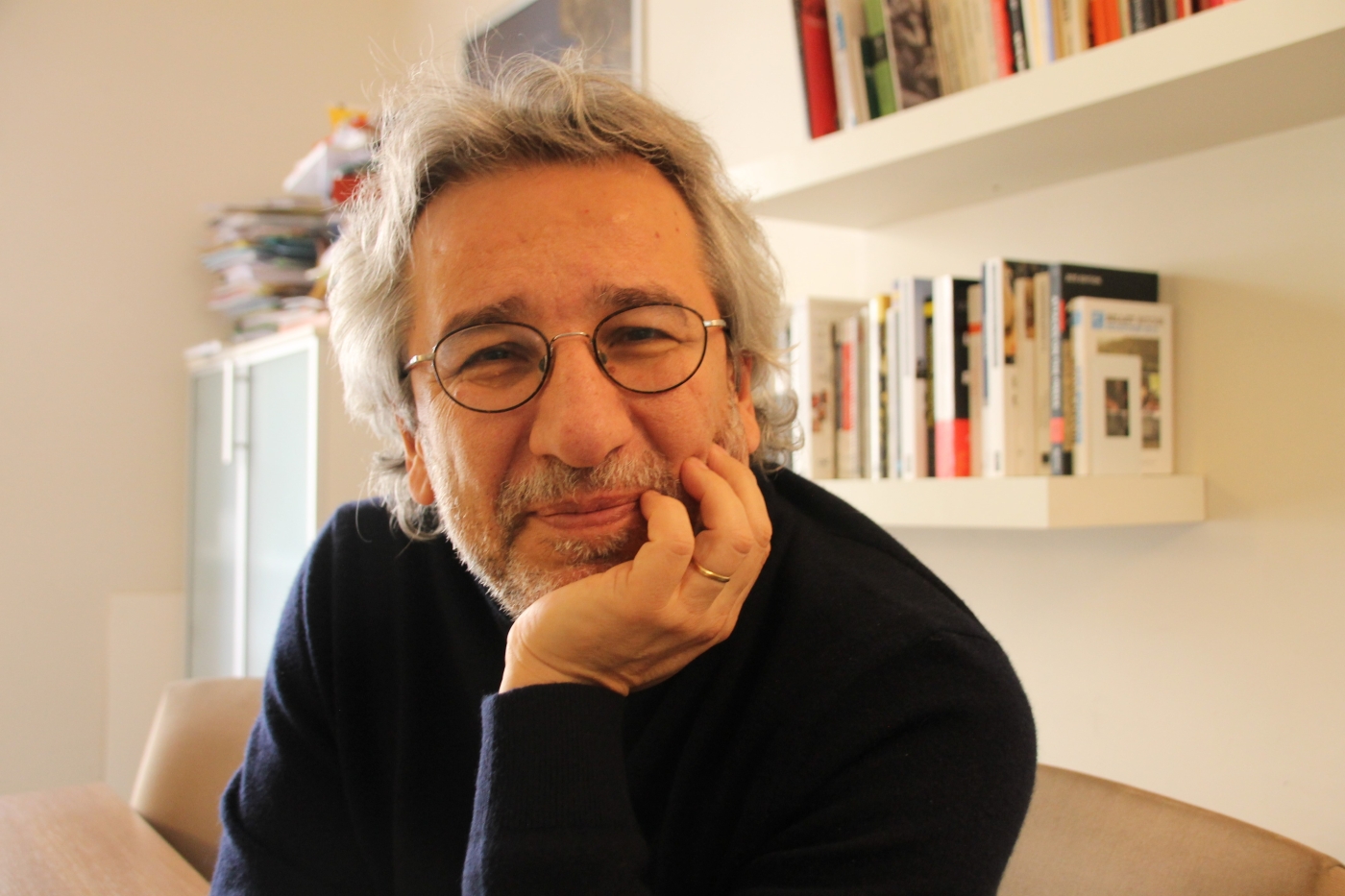 When Middle East Eye first meets exiled Turkish journalist Can Dundar, it is in the offices of Reporters Without Borders, during November's Paris Peace Forum, where he and the likes of Iranian human rights activist Shirin Ebadi inaugurated a new RSF backed “Forum On Information and Democracy”.

In a room slightly larger than the Turkish jail cell where he was imprisoned after earning the wrath of President Recep Tayyip Erdogan for publishing a story on his government’s alleged arming of a rebel group in Syria, Dundar tells MEE the rather dramatic tale of his arrest, incarceration and eventual asylum in Germany.

It’s a story so dramatic in fact, that it became the subject of a play by the Royal Shakespeare Company, whose second run (the play was first produced at Stratford Upon Avon in 2018) has been playing at London’s Arcola Theatre since November.

The play was adapted from the memoir also called We Are Arrested (named for his final tweet from the courtroom before his imprisonment) that Dundar penned longhand during 92 days in solitary confinement at Silivri Prison, held there on trumped up charges of belonging to a terror organisation, espionage and revealing confidential documents.

Meeting the real Dundar, and then seeing “him” – as performed by actor Peter Hamilton Dyer (of Doctor Who and Downton Abbey fame) - was slightly unnerving.

But it was even stranger for Dundar.

Watching your story unfold on stage

“I watched the play on opening night with the audience,” recounts the grey-haired, 58-year-old journalist, who resembles a kind of Turkish version of the actor Richard Gere, “and people were crying next to me. I didn’t realize my story was that sad.”

Soon his son - 25-year-old Ege who is also portrayed in the play and works for PEN International as a consultant in London - was crying too and Dundar found himself joining in the communal weeping.

“It’s an odd feeling to see yourself suffering on stage,” relates Dundar, who in spite of his ordeal retains a sense of humour and a sparkle in his eye.

In comparing the stage version with “real scenes” from his life, says Dundar, “I realised the power of theatre to reproduce reality. Seeing the action on stage makes more of a direct, visceral impression than reading a book.”

There are indeed several scenes that reach beyond the verbatim theatre factual style to deliver poignant emotional truths. A meeting between Dundar and his wife, separated by prison glass, where he holds up a photo of the couple and their son as the guards cut off their communication is moving, as is a scene where he dances alone in his cell to Adele’s Goodbye.

Scenes in the play of his solitary confinement - where he performs small acts of resistance like defying a “no colour ban” by making paints from fruit, tracing flowers on his cell walls, asking supporters to send him coloured letters and envelopes, and when supporters start a campaign of protest outside the prison – are evocative.

In one moment of despair he cries out, “I will transform this dungeon into a microphone!”

These scenes also speak to the plight of hundreds of journalists still languishing in Turkish prisons. (According to the Stockholm Center for Freedom 231 journalists were arrested after the failed coup of 15 July 2016 and in 2018 122 journalists received a jail sentence.)

“It’s a long struggle and we are about to lose a profession,” Dundar tells MEE in Paris. “Journalism is under threat and the big newspapers are owned by businessmen close to Erdogan. Even social media is risky,” he explains.

'I realised the power of theatre to reproduce reality. Seeing the action on stage makes more of a direct, visceral impression than reading a book'

“Tweeting or retweeting, even liking something on Facebook, can be a problem. If you say something online about the Turkish army in Syria - if you call it a war or invasion, police will knock on your door the next morning. People live under a cloud of fear.”

Ultimately he says, self censorship is a more powerful tool of repression than censorship itself.

Dundar was closely involved with the production, from the time he was first approached by the RSC in 2016 after his memoir was published, when dramaturg Pippa Hill and director Sophie Ivatts came to visit him in Berlin. In turn, Dundar visited Stratford Upon Avon to see readings of the play and meet the actor playing him.

But the play deliberately removes overt Turkish references (except for small details like Turkish coffee and tea) to make the play more universally relevant. And Dyer plays Dundar as a kind of approachable Englishman-everyman whose "normal" life is shattered by totalitarianism. It ends with an exhausted but undefeated Dundar, at a cafe in his new home in Berlin, writing a defiant letter to his government, yet longing for home.

As he gets up from his chair, a swirl of audio delivers newscasts about Trump’s America and “fake news”, Brexit-era Britain and other contemporaneous reminders that freedom of the press is a fragile thing in many places.

Dundar is the author of over 40 books including Kirmizi Biziklet (Red Bike), Yüzyilin Aşklari (The Loves of the Century), Yakamdaki Yüzler (The Faces on My Collar), Ben Böyle Veda Etmeliyim (I Should Say Goodbye Like That) and Karaoğlan (Black Boy) and has directed many documentary films, including one on Ataturk.

He was nominated for a Nobel Peace Prize in 2017. But he is above all a professional, a serious journalist defending media under attack, not just in Turkey but globally.

When asked about the moment when he decided to publish the photos of weapons being shipped to Syria in trucks belonging to Turkey’s National Intelligence Organisation, grippingly depicted in the play, he responds: “It was not a difficult decision - it was a professional reflex.” Indeed he did what any journalist might do if they’d been sent a flash-drive containing critical evidence of apparently illegal government activity.

Erdogan has acknowledged that the trucks, which were stopped by gendarmerie and police officers en route to the Syrian border in January 2014, belonged to the National Intelligence Organisation and said they were carrying aid to Turkmen battling both Syrian President Bashar al-Assad and Islamic State.

“I rushed into the newsroom,” he recounts of that fateful day in May 2015, “and said, ‘let’s change tomorrow’s headline’.”

But after warnings from the paper’s legal team about possibly dire consequences of publication, Dundar asked the entire editorial team what they wanted to do. “They replied that they wanted the story published with everyone’s name on it,” says Dundar, “but I didn’t want to endanger others, so in the end it was published with my name.

“I didn’t think it would change my life,” he recalls. “It was something normal for me to go to courtrooms and defend myself. Then it became the story of my life.”

Paying the price for truth

Fearing the worst, Dundar’s wife and colleagues encouraged him to flee to London the night before the story broke, and so he did. “But the next day,” he relates, “I got a call from my colleagues telling me that Erdogan was on state television saying, ‘the person who wrote this will pay a heavy price.’ And I’ve been paying it ever since.”

In spite of Erdogan’s warnings, Dundar wanted to clear his name and continue practising his profession. He soon returned to his homeland and Cumhuriyet was awarded the 2015 Reporters Without Borders prize for its "independent and courageous journalism” in November of the same year.

Shortly afterwards, he and colleague Erdum Gul, the paper’s Ankara bureau chief, were arrested. On 26 February 2016, Dundar and Gul were released after 92 days in prison, when the Supreme Court ruled that their detention was an "undue deprivation of liberty".

A series of meetings with prosecutors and courtroom appearances unfolded that were straight out of Orwell or Kafka novels. In his memoir and the play Dundar cites the famous Orwellian line “In a time of universal deceit, telling the truth is a revolutionary act”- as well as Kafka’s The Trial  “Someone must have slandered Josef K, for one morning, without having done anything truly wrong, he was arrested.”

But then on 16 May 2016, a would-be assassin tried to kill him outside the Istanbul courthouse, shouting out “traitor” as he aimed his gun at the journalist. Dundar was saved by his wife Dilek, who, together with the parliamentarian Muharrem Erkek, courageously confronted the assailant and helped disarm him.

The same day, Dundar was sentenced to almost six years in prison for ″leaking secret information of the state″. He knew then it was time to leave (fellow journalist Erdem Gul was sentenced to five years for the same charge).

Dundar sought refuge in Germany in June 2016 and in August 2016, resigned as editor-in-chief of Cumhuriyet, while continuing to work as a columnist. In October 2016, Turkey issued an arrest warrant for him in absentia.

Dundar continues to work in Germany and recently appeared in a ZDF documentary about a group of Jewish academics who fled 1930s Germany for Turkey to escape the Nazis, at the invitation of Ataturk. Some of them helped form the Republic of Turkey, relates Dundar, and one of them, Ernst Reuter, went back to Berlin after the war.

The film brought them together to discuss what it was like to be a German exile in Turkey and vice versa.

Meanwhile reality has since gained on the play at the Arcola theatre, as Dilek Dundar, who was stripped of her passport by Turkish authorities, managed to escape and join her husband in Germany in June of this year. As for the ongoing drama in his homeland, where even the theatre has been silenced and where playwright and actor Barish Atai starring in a one-man show called “The Dictator,” became a parliamentarian to escape arrest - Dundar is hedging his bets about the ending.

“It started as a drama and it turned into a farce,” he says. “We are all wondering about the final act - will it be a victorious one? After 17 years of Erdogan’s rule, everyone one is working on different scenarios.”

And the Turkish people’s dream scenario?

“That we all stand up and walk onto the stage,” says Dundar defiantly. “Not only the audience but also the players. We should all take part, not wait on the sidelines. We should write the ending together. That is what Erdogan is afraid of.”