Oman’s humpback whales are a genetically distinct group of whales, but being so distinct also makes them vulnerable 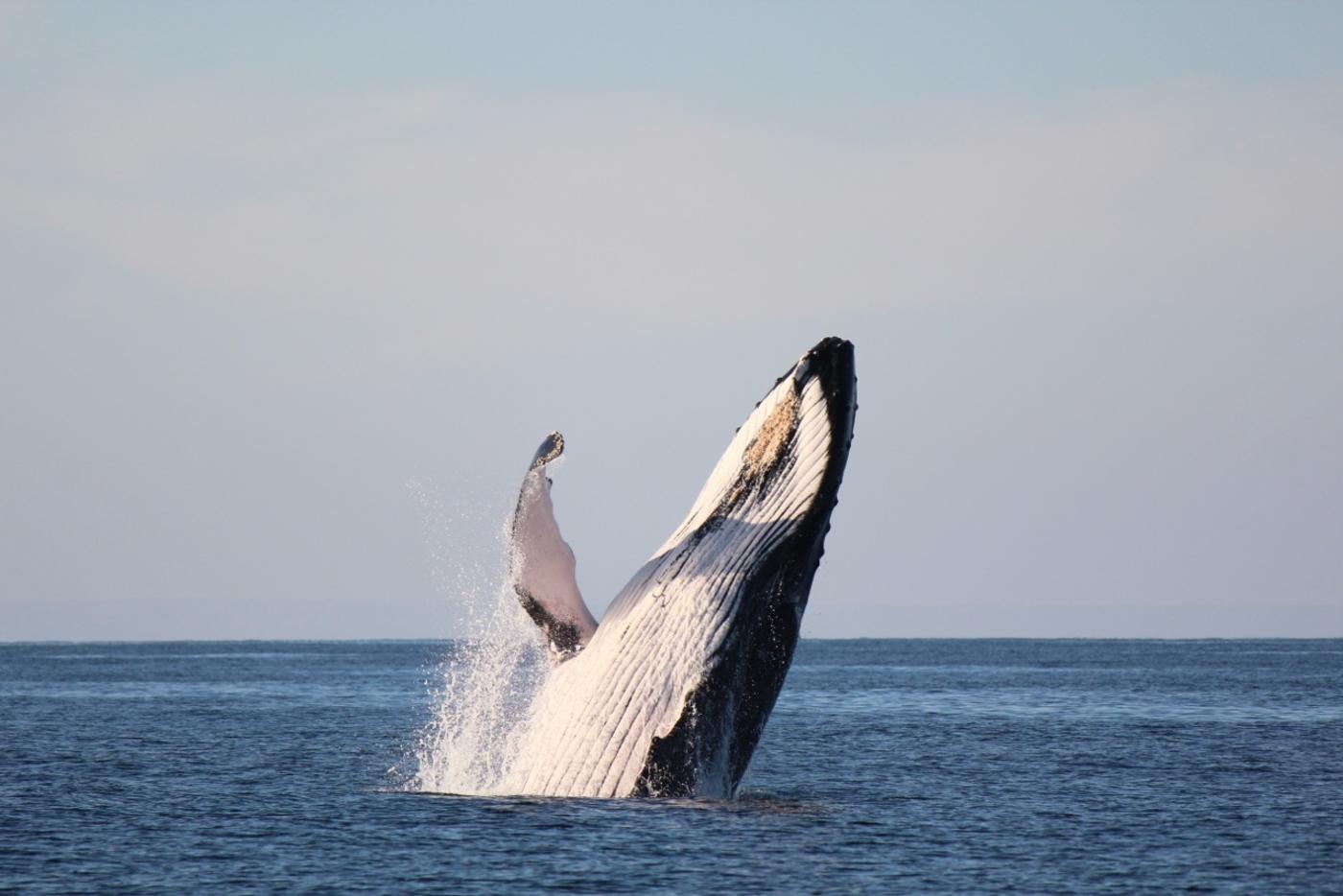 One of Oman's unique humpback whale emerges from the Arabian Sea, off the southern coast of the country (Photo credit: Salalah Tours)
By
Amanda Fisher

Every year from June through August, something magical happens in southern Oman that occurs almost nowhere else in the Arab world – it rains. It buckets down actually, in monsoon quantities.

Locals call the season khareef and it means "autumn" in Arabic, but that’s only because it coincides with the start of autumn on the nearby Indian subcontinent, with which the monsoon season is typically associated. On land, a dramatic greening takes place that is more Asia than Arabia, providing enough water to sustain the region’s abundant crops. But under the sea, something equally significant for the life cycle happens.

“In the summertime… the wind hits the mountains, goes back to the sea…and brings up the water from the depths, which is really cold and full of nutrients,” Salalah Tours director Ashraf El Weshahy tells Middle East Eye inside his office in the Dhofar region’s capital, Salalah.

This starts a feeding frenzy from the bottom of the food chain up, with fish like sardines exploding in numbers.

“You can see the water bubbling… the sea life is really blooming, prospering.”

The rest of the year, the water is warm and calm – perfect breeding conditions.

It is this happy coincidence that paved the way for an unusual discovery. Oman’s humpback whales are a genetically distinct group, atypical from every other population because they don’t migrate – they simply don’t need to.

El Weshahy has been taking tour groups to see the whales off and on for almost three years.

“Our advantage is that we sit on Al Hallaniyat Island. These whales need depths to hunt squid. We have drop-offs, shelves that would go to 3000 metres north-east of Al Hallinayat Island.”

The local man was just seven the first time he saw one of these gentle giants of the sea, which grow up to 16-metres long.

“When you are young you hear legends - they will swallow someone and bring him back again, these kinds of stories. But you see them and the elderly fishermen were really very gentle with them… they used nets and some would be caught in the nets, they would go very carefully, very quietly and [release them].”

It was clear to El Weshahy then that the whales were cognisant of other beings in the world.

His early experiences with whales have clearly left a deep impression on him, informing his staunchly protective approach to whale-watching.

“When you are young… you try to get contact to see [the whales] and they would really sometimes look [at you]… it’s a feeling you cannot describe by writing or through words, it’s a very powerful and personal moment.”

Back then, he wasn’t aware how special the local whales were. Being genetically distinct means there are differences in the behaviour and song of the Omani humpbacks. But it also means another thing – an increased vulnerability.

Her Highness Sayyida Tania Al Said is the president of the Environment Society of Oman (ESO), which has been leading research into the population, culminating in a study that was published last December.

She says the research suggests that while Omani whales originated from the southern population of whales, they have been isolated for the past 70,000 years.

The whales have never been spotted in adjacent bodies of waters, such as off Zanzibar or Madagascar.

“This population has been observed displaying both feeding and breeding behaviour within the same location, whereas for other populations the breeding is separated from feeding in distance and time.”

Other populations will breed in equatorial parts of the world and migrate to polar regions to feed. So it’s unclear whether the whales’ ancestors’ discovery of this all-in-one Garden of Eden will prove a blessing or a curse.

“Low genetic diversity could place this population at an increased vulnerability to being impacted by diseases, and also an increased risk of extinction [if] the population is unable to respond and adapt to changing environmental variables.”

The ESO estimates there are almost 20 different species of cetaceans (marine mamals including whales, dolphins and porpoises) in Oman’s milk-and-honey waters. Al Said certainly entertains the prospect that the blue whales that have been sighted in the same waters could have a similar provenance to the humpback population.

“It is quite possible that the blue whale population is also a unique subpopulation to the Arabian Sea region,” she says, noting more research needs to be done.

All the more reason, then, to protect the fecund sea from threats, which she says are “similar to those faced by other whales around the world.” They include entanglement in fishing gear, noise pollution, risk of ship strikes and habitat loss as a result of increasing development.

The Arabian Sea has a Sword of Damocles hanging over it, in the form of tourism.

The country is on an aggressive drive to attract tourists to the country and in so doing diversify its economy. But it runs the risk, like many other tropical idylls before it, that the very charms that attract the tourists could be imperiled by the rush to draw them in.

“Whale and dolphin-watching tourism is expected to increase in Oman… it is important to protect whales and dolphins from the potentially harmful impacts of tourism,” said Al Said.

The ESO has been working with international bodies like the International Whaling Commission, as well as the Omani government and tour operators to establish mutually beneficial guidelines for whale and dolphin-watching, she said.

“Official guidelines, or better still, government regulations governing whale watching would be put in place before the industry takes off. All operators would be required to observe these and training would be given before they began taking passengers out,” said WDC's responsible whale watch lead Vanessa Williams-Grey.

Guidelines have already been developed but there is still scope for government regulations.

“In many parts of the world, whale watch operators must apply for a permit and in some regions, a cap is set on the number of permits or licences that can be given out. Other regions also set designated 'rest periods' for the whales (either daily or seasonally) during which time boats cannot operate,” Williams-Grey said.

“These efforts to reduce the impact of whale watching are recommended by WDC in order to prevent an over-proliferation of operators or repeated targeting of the same whale or dolphin populations.”

Protecting the whales is important for the entire tourism and marine eco-system, she said.

But there are examples from recent history that make concerns for the whales’ safety well-founded.

The ESO’s best guess of the current population is about 82 – “give or take 10 or 20”, Al Said said. This estimate is based on a mark-recapture photo identification technique using photos from 2000 to 2004, so could turn out to be higher. Whatever the number, it should be higher still.

Scientists suspect some of the low genetic diversity is also a result of periods of steep population declines. The study noted the most recent decline was from whaling, with Soviet whalers killing 242 humpback whales between 1965 and 1966 – including 39 pregnant females.

Luckily for conservationists, there are tour guides like El Wasahy, who take the duty to protect the sea life seriously.

He recalls the days when “Russian fleets” hunted the giant mammals for meat and blubber. As one of mankind’s modern representatives, he is determined not to intrude on the whales’ environment. The boats travel no closer than within 300 metres of the pod – though they often get much closer.

He is also not interested in publicising the tours widely – indeed it was hard to even track him down, and when we did he refused to take us whale-watching on numerous days because of the weather conditions.

He takes tours on average once every two weeks, he said.

“It’s not very popular, but still we are happy not to have this mass of people coming. We try to keep it on a low profile to make sure we don’t disturb the whales. It’s a business, but we have to respect the environment… we love the whales.”

Salalah Tours have been doing workshops with the ESO to learn more about the region’s cetaceans – something they have in turn shared with boat captains and members of the public.

The government, too, recognises the importance of eco-tourism, he said, putting limits on how close building can be done near the beach, for example.

“They appreciate very much eco–hotels and developments. There’s some conditions for hotels to build, and maybe recycling will happen in the future.”

It is for this reason he is optimistic about the fate of Oman’s unique whales.

“There is lots of respect from the people, the fisherman and the captains, they have all the conditions to breed and increase, and we hope this will be the case, of course.”