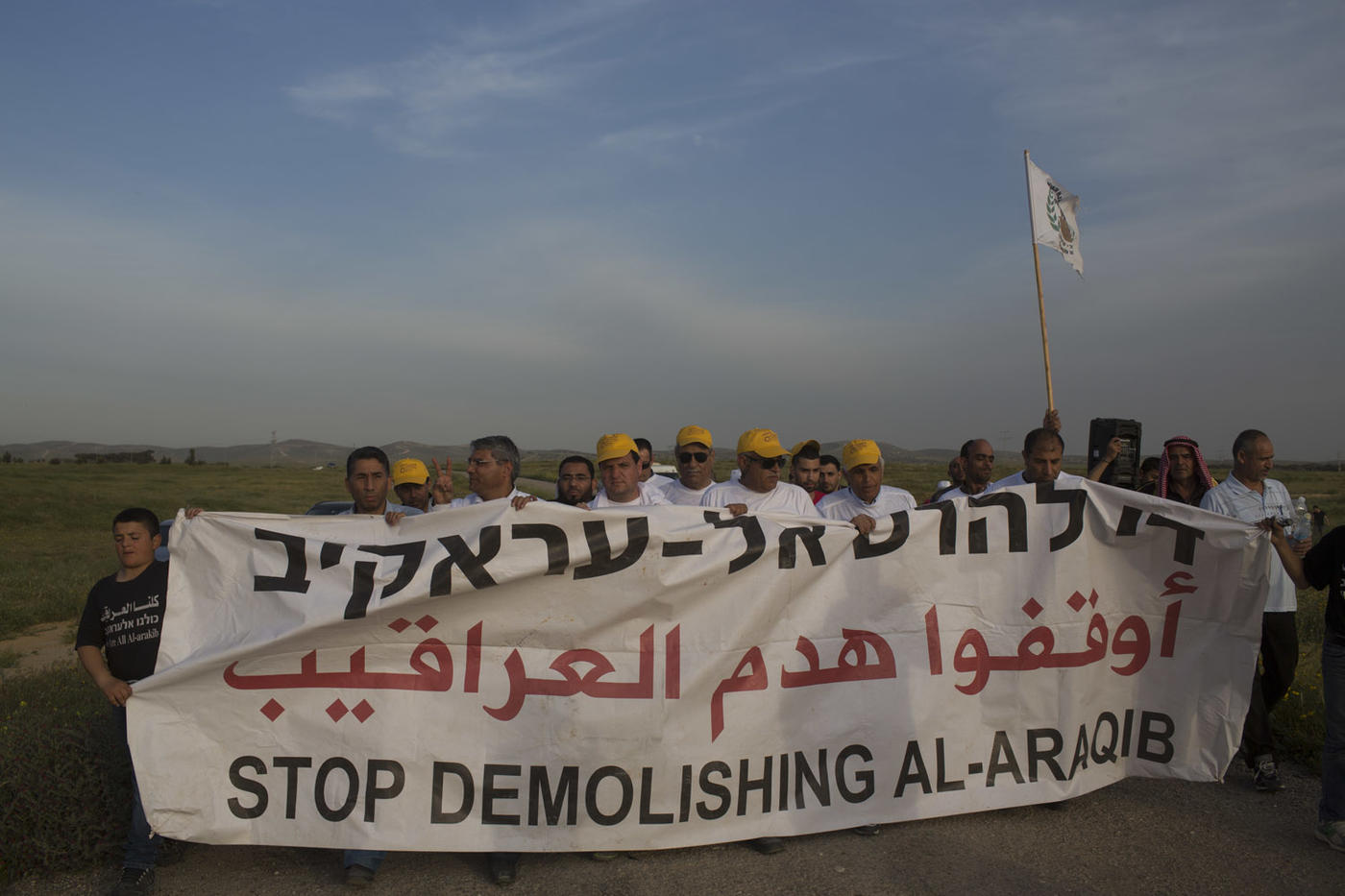 The Joint List leader Ayman ODeh joined Bedouin and students in a four day march on Jerusalem to demand recognition of 46 Bedouin villages (MEE/Oren Zin)
By
Oren Ziv
On the morning Thursday, some 100 members of the Joint List alliance of four Arab parties, Bedouin students and activists gathered in the unrecognised village of Wadi al Na'am, in the Negev dessert in southern Israel and started a four-day march to Jerusalem.
The march was organised by the head of the Joint List, Ayman Odeh, who promised months ago that if he was elected to the Israeli parliament, his first action would be to march from the unorganised Bedouin villages in the Negev to Jerusalem, calling the Israeli government to recognise the villages and give them full rights.
As most Israeli politicians were resting after their intense election camping, or busy with the negotiations to form a new Israeli government, Odeh chose to march to Jerusalem, ahead of the opening session of the Israeli parliament, the Knesset, that will take place next week.
Bedouin school kids were walking into the elementary school in Wadi al Na'am, the biggest unrecognised village of 46 villages in the Negev desert, as the activists were getting ready to start their march.
״We want to focus the public attention to the most harsh problem - over 40 villages that were here before Israel was founded, people are living with out water and electricity," Odeh told MEE, "children here have to march kilometres to reach their school, we have a civil and democratic plan to recognise those villages."
Odeh, who only two months ago was unknown to most of the Israeli-Jewish public, and now is well known, was asked by a local journalist why do the Bedouims rejected in the past all the governmental plans regarding the villages in the Negev. Odeh calmly answered: "You should ask the government why the don't simply recognise all the villages? I promise you that if the do so, they [the Bedouins] won't understand how they didn't recognise them 30 years ago."
In the Negev, all the 46 unorganised Bedouin villages were established before the foundation of Israel. Despite the fact all the 100,000 residents are Israeli citizens, they don't enjoy any governmental services to their villages.
The state dose not connect them to electricity, water and sewage, cleaning or garbage collections services. Also, the villages don't have a planning permission so many of the houses are considered illegal and face demolitions orders.
Parliament member Dov Hanin, the only Jewish parliament member in the Joint List also joined the march. He told MEE:
"I think this march is very symbolic,of one of the most justified struggles and important to the Arab public in Israel, and this is a struggle for equality. As Jewish villages in the Negev are getting water and other facilities from the state, and can live in a reasonable conditions, so do the Arab residents of the Negev deserve to get the same rights."
On the way a Bedouin child, riding his bike in the open area outside the city of Beer Sheva, asked one of the activists marching, "Where are you going to?" After he was told this was a march to Jerusalem, the surprised child said, "By foot? This is really far!"
Mufid Abu Sweide, a Bedouin youth living in the unrecognised village of Wadi al Na'am told MEE: "We hope to raise our voice in the four days' march, we demand basic facilities to our village." He pointed out a feeling many residents in the Negev share regarding the politicians: "We want people to work for us, not only people who will sit in the parliament, and as Ayman Odeh has the courage to march and he is making an effort for us, we want also the other politicians to do so."
Odeh is well aware of the demands from the public who voted for him, and gave his party 13 seats in parliament, to see actions on the ground: "We organised this march because we think this government does not give us many options to act through the parliament," he told MEE.
"Therefore we will focus mostly on the popular struggle, using civil and democratic tools, and in the coming months this struggle will expand."
After passing through the city of Beer Sheva, the march arrived in the afternoon to the unrecognised village of Al Arakib, a village that was demolished over 80 times by the Israeli authorities.
The small village became a symbol of the Bedouins' struggle in Israel.
The march was welcomed by a small vigil organised by the 30 local residents, who remained living in the village. Before its first demolition it was the home for over 300 Bedouins.
Nowadays, the village is demolished almost every month. The residents are forced to live inside the local cemetery, in small shacks next to the graves.
Aziz al Turi, told MEE: "It can't be worst then what Netanyahu did to us, till him no government dared demolished an entire village. But our village was demolished over 82 times till today. I'm optimistic when I see a new generation, youth and young parliament members struggling with us."
As the night fell, the activists seemed to be tired after marching over 30 kilometers during the first day of the march. On the next days they will march some 90 kilometers, before arriving at the Israeli president's house in Jerusalem, delivering him a letter demanding recognition for all the 46 villages. 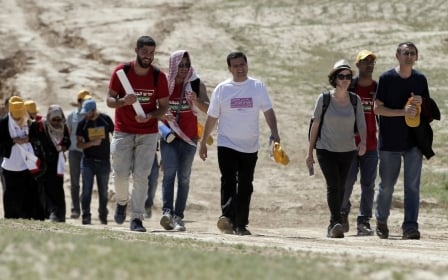 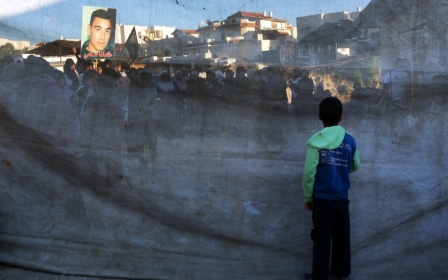