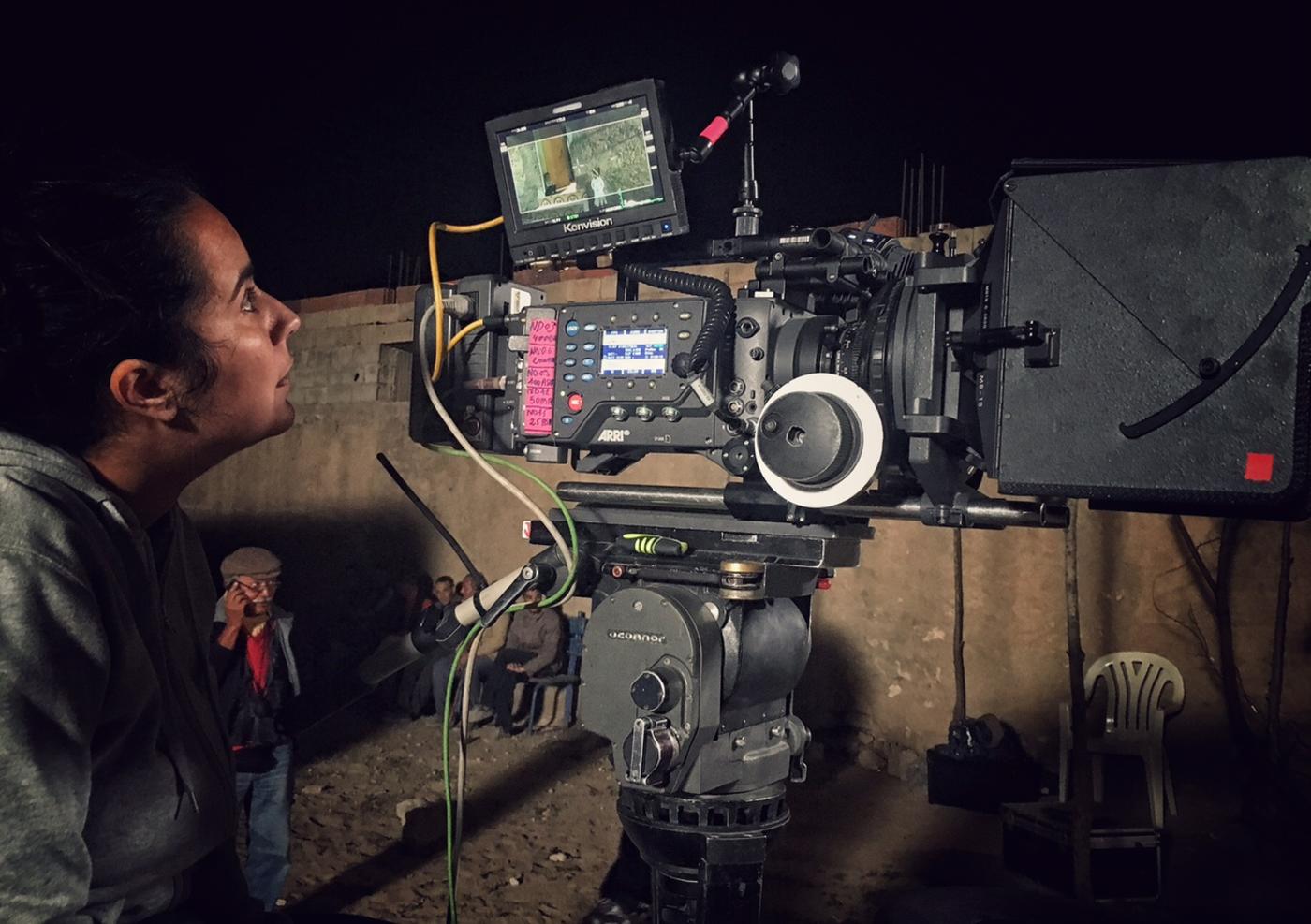 MOSTAGANEM, Algeria - "To say that I am thrilled is an understatement. I am overwhelmed by intense emotions that go from excitement to anxiety," 34-year-old filmmaker Yasmine Chouikh told Middle East Eye on the brink of shooting her first full-length feature in Mostaganem, a provincial city located 340 kilometres west of Algiers.

Til the World Ends is a comedy about a woman who decides to organise her own burial, and though the filmmaker is writing a new chapter in her career, the endeavour is making her quite nervous. Like many Algerian directors of her generation, Chouikh first started out making short films "because it was easier as it costs significantly less". She produced El Bab (The Door) and El Djinn (The Demon) respectively in 2006 and 2010. Chouikh hopes to follow in the footsteps of her fellow filmmakers with her first dark comedy that she expects to release in 2017.

2015 was indeed a pretty good year for this new generation of self-taught Algerian filmmakers, who happened to grow up without ever having seen the inside of a cinema. Their enthusiasm for cinema has paid off with some already making breakthroughs in the festival circuit, and they all wish to see Algeria's once-celebrated cinema flourish again.

In Marseilles, Turin, Montreal and more recently in Agadir, Hassen Ferhani's second movie Fi Rassi Rond Point (Roundabout In My Head) has gotten critical acclaim by the jury of several international film festivals over the past few months. Released last summer, Ferhani's multi-award winning documentary delves into an absorbing picture of the daily routine of employees in Africa's largest slaughterhouse, based in Algiers.

Meanwhile, his friend, 38-year-old director Karim Moussaoui, with whom he cofounded the Chrysalide cine-club in Algiers, competed for the short film category at the 2015 Cesar Awards. Les Jours d'Avant, which depicts how Algeria's "Black Decade" of violence has left a population uprooted and separated, was produced by coincidence.

MEE was attending a screenwriting workshop in Morocco when we met Virginie Legeay, a French executive producer. "She read a draft of my screenplay and convinced me to go ahead with it," said Moussaoui, who is now busy writing the script for his first full-length feature film.

Though Algeria's output remains tiny and depends heavily on public funds, there is hope that this will be the start of something big. "We have seen a revival of Algeria's cinema industry over the past few years. Production volume has slightly increased, there is more funding available and Algeria has a much stronger presence in the international festivals," Salim Mesbah, spokesperson of the state-run organisation AARC, which develops and promotes Algerian culture, told MEE.

"After years of absence, Algeria joined the Cannes Film Festival Market in 2012 and since then, it has showcased its new fictions," said Mesbah. Until now the agency has co-produced 102 productions, including 72 fictions and 30 documentaries, over the past five years.

But Algeria's moribund cinema industry cannot recover with only public funds according to Mesbah. "It is insufficient. The private sector should play a key role in the country's creative resurgence. Football is not the only business niche," he said while sitting in his office, installed in an Ottoman villa overlooking the bay of Algiers.

"Renaissance is an exaggerated word considering the current situation and the lack of film crews, equipment and domestic film distribution networks. The industry is re-emerging slowly thanks to a new generation of talented filmmakers who are making the Algerian cinema vital and outward-looking again. But there is a lot of catching up to do after almost 30 years of downfall," said Malek Bensmail, a 50-year-old renowned Algerian movie-maker.

While Tunisia and Morocco are home to several international feature films that have generated millions of dollars and created jobs, Algeria is still not equipped with a modern film production studio or a cinema training centre worthy of its name. "Algerian aspiring filmmakers have to learn on the job and doing internships is their best alternative," Mounes Khammar, 41-year-old founder of Saphina Productions, told MEE.

"As result, there are few high-skilled technicians. Algeria has therefore become an eldorado for foreign technicians, who face job crises in their native countries," he added.

The situation has not always been that depressing. "There was a time when Algeria co-produced three movies of Egypt's iconic director Youcef Chahine, including his masterpiece The Sparrow ," said filmmaker Salim Aggar, who made a documentary about the history of the Algerian cinema.

Chouikh's generation was not yet born when nascent Algeria's cinematic industry was experiencing a so-called golden age. Right after Algeria gained its independence from France, its indigenous cinema emerged and rapidly became one of the biggest film producers of the Arab world, far outstripping neighbouring countries in the Maghreb. Ahmed Rachedi, Mohammed Lakhdar-Hamina and Amar Laskri, among others, conquered the hearts of millions of Arab-speaking people and were praised around the world.

Only five years after the end of the war of independence, Lakhdar-Hamina won the Best First Film award at the 1967 Cannes film festival for Le Vent des Aurès (The Winds of the Aures). The film depicted the plight of a mother looking for her son who had been captured by the French army.

In 1975, Lakhdar-Hamina brought home Cannes' Palme d'Or for his opulent anti-colonial epic Chroniques Des Années De Braise (Chronicles of the Years of Fire). He remains the sole Arab filmmaker to have obtained such a prominent international award.

The golden age did not last long. A potent combination of political instability, a failing economy and shrinking funds caused the steep decline of Algeria's cinema industry during the 1980s. This was accelerated by the black decade of the 1990s. Film production fell to a miniscule output while cinema theatres bolted their doors shut, one after the other. Only the Cinematheque in Algiers, the hotspot for die-hard cinema goers, remained open during the lingering conflict between the Algerian government and Islamic rebels.

While there were no less than 400 cinemas during Algeria's glory days, today there are nearly 100 standalone cinemas, including 10 in the capital, in a country of 40 million people. More importantly, the remaining ones are in a shambles and have been turned into men-only zones.

"Cinema theatres still do not have a good reputation in Algeria. This explains why some local Islamic rulers have decided to keep the doors of cinema houses closed, though they have been recently restored," said Aggar, sitting in his office in front of shelves filled with VHS cassettes. "These come from the video rental store I owned," he added.

Abdenour Hochiche, the president of the Bejaia Film Festival, an annual event he created in the region of Kabylie in 2002, regrets that "Algerian films are pushed off the cinema roster quickly and therefore do not get the screen time they need to secure profit.

"We need to educate a new generation of filmgoers on enjoying big-screen entertainment, ultimately creating an audience for locally produced films," he said.

Thanks to AARC's mobile cinemas, home-made films have become commonplace. Last year, a truck that was transformed into a theatre to seat hundreds when parked, went from town to town visiting isolated villages of Africa's largest country. "It solely screened Algerian recent fictions," Mesbah said.

"There were so many people every night that we could not even count them. When the trucks left, people asked us when we would come back. The population loves this project so much that it will be renewed this summer."

But movie making remains an unprofitable business in Algeria and one that requires tedious juggling. "It has taken me more than six years to reach this point," Chouikh explained. "Perseverance is what drives us. We will never give up filmmaking despite the current circumstances."

Some argue that the problem is not only financial or political, but rather an issue of these new films not connecting with local audiences. To Algerians, it can be compared to understanding indie-like movies. "Travelling around the world with his film is a great experience, but it is pointless if the local audience does not get the chance to watch it. Recent Algerian output is very non-commercial in essence," Khammar said.

"We cannot revive a cinema industry when most of the stories are unappealing to common laymen. Instead of mostly producing drama, we should focus on making commercial films that can attract the masses."

During the 1960s and 1970s, Algerian films were overtly political. "The production was almost exclusively dealing with two burning topics: decolonisation and the liberation war," 45-year-old director Mohamed Lakhdar-Tati told MEE. He added: "The then-leaders thought that cinema could contribute to the nation-building effort."

Today, Algeria's filmmakers are of a different breed. The post-terrorism generation's stories have made a break with national liberation war films by digging deeply into the questions of civil war trauma and widespread disenchantment among the Algerian population.

"With Omar Gatlato, Merzak Allouache has become the first director to depart from post-Independence heroism and mystification of freedom fighters, paving the way for a new generation of Algerian movie-makers. Cinema is no longer a matter of national pride although the regime still tries to use it for its self-laudatory propaganda machine," Moussaoui explained.

"We grapple with universal themes, from democracy to patriarchal society, and end up telling universal stories that just happen to be written and filmed in our backyard," 39-year-old director Bahia Bencheikh el-Fegoun, told MEE. Her latest documentary H'na Barra (Algerian dialect for We Outside) follows a woman who wants to remove her Islamic veil.

"Algerian viewers expect something different, something that is more entertaining. If the Algerian filmmakers can come up with a more attractive formula, I am pretty sure that there will be more people watching these movies," Khammar said.

"We must work on popular storylines like what Lyes Salem did with his comedy Mascarades. This is the only recent fiction that has gained popularity among Algerian filmgoers," she added.

Similarly, Bensmail said: "Algeria's cinema is going through a great new experience, but it is going to take time to bring the industry back to life and people back to the theatres." 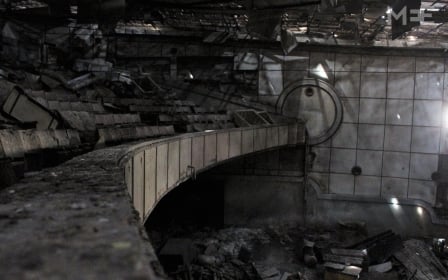