FILM REVIEW: 'We Are Many'

The film's depiction of the people's determination against injustice, destruction and greed is inspiring and offers hope for the future 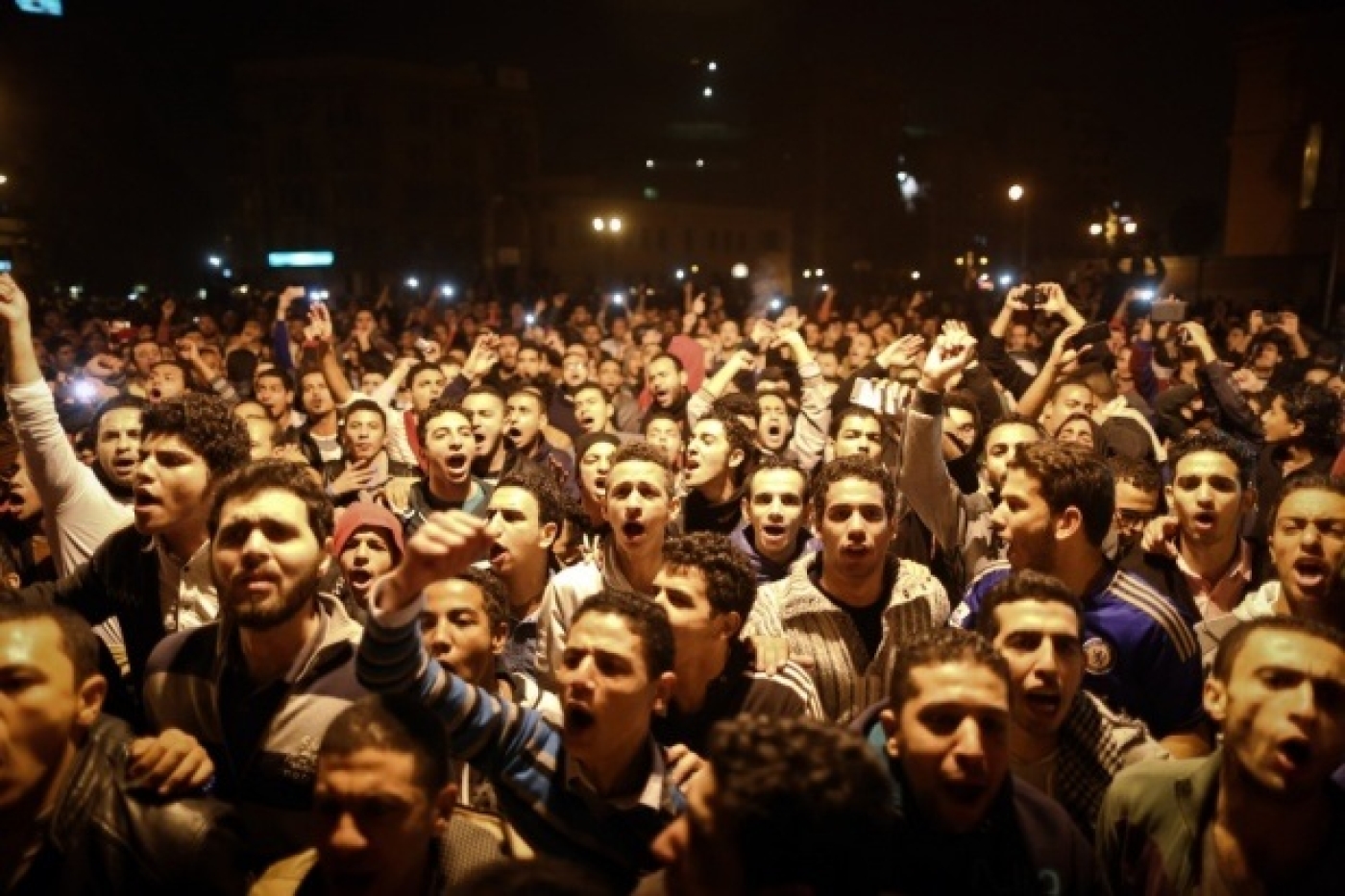 Photo: Protesters chant slogans at a demonstration in Cairo (AFP)
By
Hamza Hamouchene

The 2003 Iraq war will go down as one of the biggest scandals and most odious crimes of the early 21st century. It not only caused untold human suffering, destruction and mayhem (up to a million deaths according to some estimates, more than five million refugees and internally displaced, disastrous health effects including birth defects and cancers due to the use of chemical weapons, poverty, sectarian violence, etc.), but it did so on the basis of shameful cynicism and murderous lies.

Following the al-Qaeda attacks on 11 September 2001, the United States felt the need to react in order to safeguard its reputation as a superpower with its self-appointed role of managing world affairs. It invaded Afghanistan in 2001, but as if that was not enough to quench its thirst for more violence and domination, it fabricated lies about weapons of mass destruction (WMDs) in order to invade Iraq, a country much weakened by bombing campaigns and merciless sanctions enforced by the West for more than a decade. There were no WMDs and the purpose was not to fight terrorism and install democracy but to force a regime change and plunder more resources.

But this tragic state of affairs did not go unchallenged. There was overwhelming international opposition to the US-led war in 2003 that culminated in the historic global protest on 15 February 2003. Around 30 million people marched in over 800 towns and cities around the world against the impending Western attacks on Iraq saying: "Not in our name!"

The story of the biggest protest in global history and the run-up to these massive events is the subject of a new gripping documentary by London-based filmmaker Amir Amirani. The film, We Are Many, is an indictment of those people who waged an illegal and criminal war, and succeeds in conveying the anti-war spirit of 2003 by documenting and charting a crucial moment in the left's efforts to organise in order to stop the war.

Several impassioned and emotional interviews have been conducted with a wide range of activists, intellectuals, writers, artists, war veterans and politicians sharing their memories and thoughts about these historic events: Tariq Ali, Tony Benn, Lindsay German, Chris Nineham, Salma Yaqoob, John Rees, Noam Chomsky, John le Carré, weapon inspector Hans Blix, David Blunkett, and even Richard Branson, who gave details about a failed attempt to stop the war that he apparently planned. Tony Blair couldn't contribute to the documentary, as he was busy with his charity work and his job as a Middle East peace envoy. (In the Q&A that followed the film premiere, Omid Djalili, a stand-up comedian and one of the film producers jokingly commented on Blair's role as peace envoy by saying: "It's like appointing Hitler as chief rabbi!")

Enthusiasm and energy radiate throughout the film, especially the scenes of organisers and people all over the world coming together and developing a well-coordinated plan taken up by different organisations and movements spanning all continents (even in Antarctica) in order to voice their rejection of the American and British belligerent plans. To see that kind of potential and determination against injustice, destruction and greed is inspiring and offers hope for the future. One of the powerful moments in the film is when war veterans, realising the sheer deception and hypocrisy of their leaders, were throwing away their honourary medals and denouncing the war machine. In other feel-good sequences, some American campaigners and activists were shown following and shaming the war criminals that destroyed and wreaked havoc on Iraq.

We Are Many also reminds us of the lies and fabrications of the Bush administration and its sycophant Blair government in their intent to invade Iraq and impose regime change. The sequences making a contrast between the jokes made by Bush about the failure to find WMDs at a black-tie dinner for journalists in 2004 and the horrific pictures of the suffering and destruction in Iraq are truly poignant and enraging. Will these war criminals ever be punished for their unforgivable deeds? Will the Chilcot inquiry ever deliver its findings one day? Some archival footage shows the contempt that politicians like Bush and Blair have towards public opinion and democracy; Bush was blatantly dismissive of the protesters when he said: "Listening to them is like deciding on policy by consulting a focus group!"

The huge mobilisations of 2003 were sadly a broken momentum; the sheer disappointment and frustration felt after the war was launched should have led to civil disobedience on a mass scale, but unfortunately it did not. This shows that big numbers in the streets, despite being of critical importance, are not the driving force to bring about change. A correct analysis of the situation in order to transform it is. This should have brought into question the system that keeps generating wars and impelling politicians to invade and destroy countries in order to maintain the West's dominance and perpetuate its geopolitical and economic interests. It is not about simply pressuring the Labour Party or pushing it a little bit to the left. The Labour Party, like the conservatives, is part of the war-mongering imperial establishment that keeps crushing people all over the planet. The record is so damning and to maintain the illusion that this party is somehow progressive is criminal.

Challenging the view that the protests were a failure and avoiding a short-term vision, the documentary wanted to show that the protests had an impact, even 10 years later, in the decision of the British Parliament not to go to war in Syria in 2013. That might have been true with the reluctance of the Labour Party to commit the same mistake twice and engage in an unpopular war. However, to believe that democracy finally worked and our politicians listened to our concerns would be ludicrous by any stretch of the imagination. If that were the case, why didn't they listen to our opposition to the NATO intervention in Libya? These leaders and politicians would go to war if their interests and positions were seriously threatened regardless of what the masses of people think. They are bent on exploiting and subjugating entire populations through different means, including war, and they do it through their bourgeois pseudo-democracies and "international" institutions they built for these ignominious purposes.

The documentary, in its attempts to emphasise or paint these moments in largely positive terms, falters and makes a bold if not clumsy move. It seems to exaggerate the impact of those historic mobilisations and confusedly link them with the 2011 Egyptian uprising that toppled Hosni Mubarak. The common thread between the different stories was not that obvious, despite some Egyptian activists' declarations that the huge 2003 protests were an impetus for the democracy movement in Egypt. I left the screening feeling that the documentary was suggesting that the 2003 anti-war movement led to the Egyptian uprising, somewhat in a linear fashion. This is in my view a dubious claim that should be further scrutinised. Movements all around the world influence each other as no one exists in a vacuum but overstatements should be avoided and precedence given to local struggles and dynamics over external influences. The Tunisian uprising did not cause the Egyptian uprising and neither did the 2003 anti-war protests.

Rather than linking the struggles in this way, the common thread could have been uncovered by asking some important questions such as: Why do Western powers keep going to war? Why did their leaders feel the need to stage all those lies? The answer is surely not because of some insane politicians but because of an unjust global system of imperialist domination and capitalist exploitation that generates wars, poverty and injustice. The Iraq war and the Egyptian uprising must be analysed within this framework.

We Are Many is nevertheless an important story to tell and a brilliant testimony to the power of organising and the possibilities it could unleash. But it should also remind us that we should not be fooled by western liberal democracy, which is a big web of lies, deceit, greed and contempt of the people. Instead, we should be organising around a radical, anti-systemic and liberating vision to stop all imperialist wars.