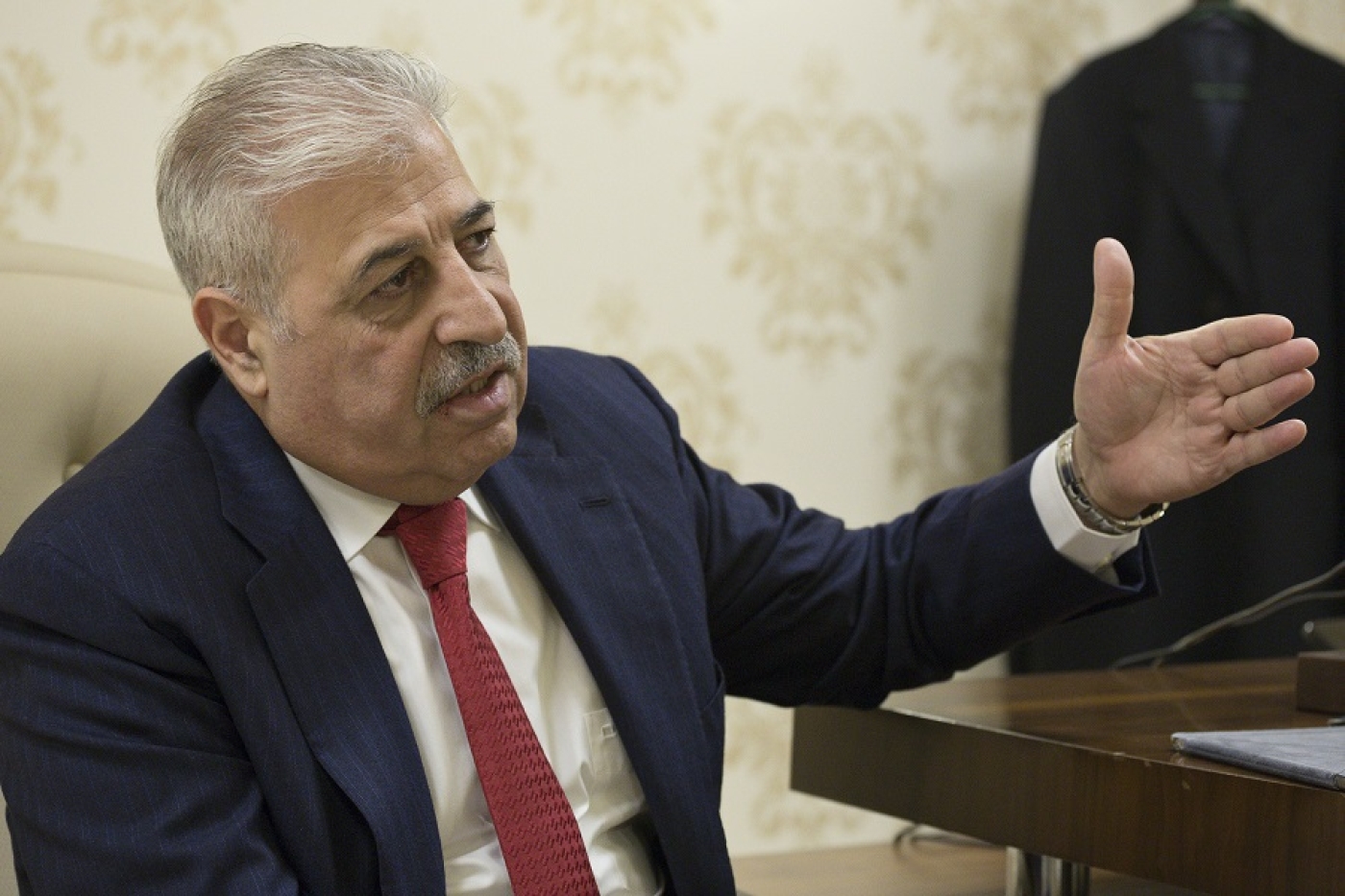 Since Mosul fell into the hands of the Islamic State (IS) group under his governorship more than two years ago, Nujaifi, who has deep family ties to the city, has resided in de-facto exile 80km away in the Kurdish city of Erbil.

Despite being a minority, Sunnis ruled Iraq from 1932 until Saddam Hussein was toppled in the US-led invasion in 2003, when elections put Iraq’s Shia majority in charge of the government. During this time, Nujaifi has risen to the top as one of the most influential Sunnis in the country.

Iraq's Sunni-Shia tensions, which reached a deadly peak between 2006 and 2008 when the country plunged into a vicious sectarian civil war, have become increasingly heightened in recent months as the battle to retrieve Mosul from IS has raged on. The tensions centre on the presence of Shia militias, some of which have been accused of sectarian war crimes, in the predominantly Sunni Nineveh governorate.

So controversial is Nujaifi that last month the Iraqi military issued a warrant for his arrest on account of being the agent of a foreign power, following moves to secure both financial and logistical support from Turkey for the Sunni militia, the Nineveh Guard, which he founded in 2014.

It is a charge for which he could face the death penalty if found guilty.

Nujaifi leans forward in his chair, seemingly unconcerned about the warrant. “This case is entirely political…they [the Baghdad government] are trying to prevent Mosulawi leaders from returning to Mosul,” Nujaifi said.

'This case against me is entirely political' - Atheel al-Nujaifi, Nineveh’s former Sunni governor

He believes his dismissal fits into widespread efforts to disenfranchise Sunnis in Iraq and keep them out of power.

“I think it is very dangerous, not just for me, but for the situation in the city,” he said.

There are displays of strength dotted throughout his home: on the street out front two stone lions stand guard, while behind the desk in his second-floor office a Lee Enfield No 4 World War II era rifle leans against the wall. Will the Sunni strongman defy the warrant and return to Mosul?

“Yes of course,” Nujaifi continued. “It’s a very simple case. It’s nothing, it means nothing.”

The warrant, which calls for his arrest if he returns to Mosul, was issued after Nujaifi angered Iraqi generals by paying a recent visit to areas liberated from IS east of the city.

One Iraqi special forces officer in eastern Mosul told MEE last week: “He was acting like he had liberated the east on his own when it is us who have risked our lives for Mosul."

Nujaifi is firm on the point that the city must be secured and governed by its own Sunni population, not just in a military sense but in order to “resist and fight IS ideologically” too.

He is insistent that “only the Arab Sunnis can fight them ideologically”.

Despite that, he claims he is looking for Shia leaders to work with. "We need to have Shia partners. I would prefer we worked with the secular Shia, not Moqtada al-Sadr or Ammar al-Hakim,” two of Iraq’s most politically active Shia scholars.

“We think that the scholars need to stay inside the mosque, not outside,” he added.

After fleeing Mosul in 2014, he immediately set about establishing a predominantly Sunni force that might be able to recapture the city, and so, the Nineveh Guards were born.

He claimed that the Nineveh Guards are “the only force organised in Mosul by the people of Mosul”.

He said that they now have 4,000 fighters, though only 1,000 of these fighters’ salaries are paid by the Baghdad government, while the rest are funded and supported by Nujaifi’s main backer, Turkey.

Some within the government are happy at the idea of this force helping with security in Mosul, while others, like Iraqi Prime Minister Haider al-Abadi and former prime Minister Nouri al-Maliki and their Shia Dawa party, are more cautious about empowering the country’s Sunnis.

'If Mosul is destroyed and isn’t rebuilt, the Sunnis in Iraq won’t have a city to hold their culture... It means that the Sunnis of Iraq will all be refugees'

That said, other than supporting the Iraqi army’s 16th division in Mosul’s north, they have played a small role in the battle for the city so far.

They are also a far cry from forming the 15,000-strong force that some Iraqi officials have claimed will be required to maintain security in the city following its complete liberation.

Nujaifi claims his men are capable of providing this security, but says “we need finance to continue to work on recruiting more people”.

Last week, an elderly man in the recaptured neighbourhood of al-Ba’ath commented on Nujaifi with an old Arabic proverb: “If a shepherd leaves his flock, the wolves will come.”

A shepherd who left his flock?

The sense that Mosul was abandoned by Nujaifi when IS came is common among the city’s liberated population, but Nujaifi insists that he has enough support from the people in Mosul to play a role in the city’s future.

“I went to Mosul last month and I saw that the people want me. There were a lot of people with me and Mosul is still our [the Sunni] place,” he said. “I’m the only Sunni leader who has a force. I also have my party [al-Hadba] inside the city.”

Such statements make it easy to see why so many believe he is set on returning to the Nineveh governor’s office despite having been removed from his post by the Iraqi parliament in May 2015, following a controversial trip to the US where he asked the US government to directly arm Sunnis in Iraq.

Yet he denied any interest in returning to his previous position.

“I want to continue in the political world, but outside of elected positions. I don’t want to return as governor and I don’t want to be a minister in Baghdad,” he said. The 59-year-old was unclear on exactly what his involvement might be.

'I think the Shia benefit from Sunni extremism, not the Sunnis'

On the issue of militant groups like IS and al-Qaeda that has plagued Iraq’s Sunnis, Nujaifi said that it is just a response to its Shia counterpart.

Nujaifi insists that it was this sort of extremism, supported by Iran, that allowed Mosul to fall in the first place.

He claims that in 2014 the then Shia prime minister Nouri al-Maliki allowed the predominantly Sunni city Mosul to fall to “teach the Sunnis a hard lesson,” in other words, force their obedience to Maliki’s nefariously sectarian Shia government.

When the militants began their assault, he claims he asked “the army to give us [Mosul’s civilians] some weapons – they refused to do it”.

While Nujaifi has no qualms about working with a Shia prime minister, he warns that Mosul must remain a Sunni city.

“If Mosul is destroyed and isn’t rebuilt, the Sunnis in Iraq won’t have a city to hold their culture, their markets and their universities. It means that the Sunnis of Iraq will all be refugees. This is going to create more extremists and more instability in the whole region. We just want to be able to live our lives, the rights of the Sunnis – that’s enough for us.”

With the Mosul operation now in its fourth month, he admits that Prime Minister al-Abadi and Iraq’s armed forces have “done a good job,” but warns that so far there is no “political plan for Mosul”.

Iraq needs Sunni leaders, he says, leaders like him, and his brother Usama, a former vice-president and speaker of the Council of Representatives.

As he is emphasising the importance of Sunni leaders for the community’s future, darkness falls over the room due to a power cut.

On the potential for the partition of Iraq, Nujaifi says: “I will say that we must prioritise the security and stability of Mosul, everything else comes after."