CJ Werleman
US military advisers in Iraq's Anbar province face a considerable threat from IS. How will the US respond if its servicemen are captured or killed? 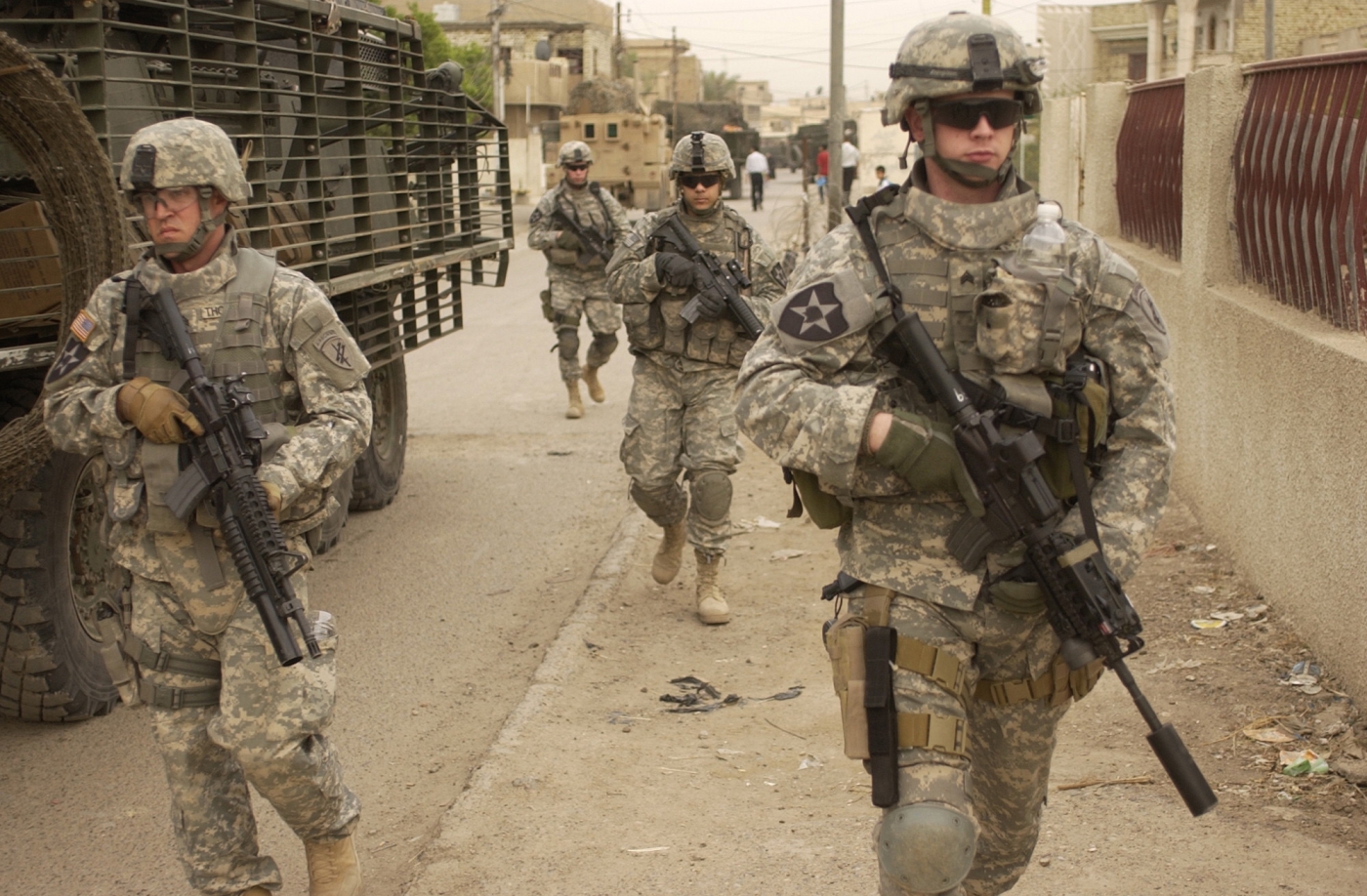 “History doesn’t repeat,” quipped Mark Twain. “But it does rhyme.”

In 1968, Richard Milhous Nixon was swept into office on the promise he’d bring about an end to his predecessor’s war. Two months after taking office, however, US combat deaths in Vietnam had climbed to 4,000, and for US military planners, there appeared no end in sight.

To make a long story short, Nixon’s promise to wind down the war translated into a dramatic escalation of US military force. Less than two months after taking office, Nixon launched a secret bombing campaign in Cambodia, increased bombing in South Vietnam, and ground offensives were stepped up.

By 1972, US combat deaths had surpassed 50,000, while a study by the British Medical Journal in 2008 accounted for more than 1.7 million Vietnamese deaths, military and civilian, during the 1965-74 period - the years of US engagement.

After seven years of combat operations, negative public attitudes in the US towards the war would ultimately result in an “honourable withdrawal”.

In 2008, Barack Hussein Obama was swept into office on the promise he’d bring about an end to his predecessor’s war in Iraq, which, coincidently, also measured out to be a seven-year-long period of combat operations that according to one academic study resulted in the deaths of nearly half a million Iraqis during the 2003-2011 period, the years of US engagement.

In both countries, the respective indigenous populations would feel the devastating effects of US military operations, including refugee displacement, birth defects and psychological and physical trauma, long after US withdrawal.

While America’s 44th president accomplished, at least from a US perspective, an “honourable withdrawal” in 2010, his presidency will now be bookended with an escalation of US military force in Iraq - with his successor to be elected on a likely mandate to end or win Obama’s war.

Yes, I made a Vietnam-Iraq metaphor. Boring. A metaphor that has been used every single time US military muscle has been flexed abroad. But the similarities are now so eerily alike, it’s almost impossible to not be awe struck, or believe in parallel universes or magic. In other words, the similarities indeed rhyme.

“The only thing we learn from history is we learn nothing from history,” writes Steve Chapman in an op-ed for Reason magazine. In striking a parallel between the US engagements in Iraq and Vietnam, Chapman notes: “A corrupt government that has alienated many of its people finds itself unable to overcome a growing insurgency in an endless civil war and expects a superpower on the other side of the globe to come to its rescue.”

On Tuesday, President Obama announced a further 500 “military advisers” would be deployed to Iraq for the purpose of helping Iraqi forces retake the city of Ramadi, and ensure Baghdad doesn’t fall to the Islamic State (IS) group.

In case you missed another Vietnam metaphor - IS is now viewed by the US through the lens of the 1960s-era Domino Theory: If Ramadi falls, goes the thinking, so will Baghdad, and so too could the entire Sunni-dominated Middle East.

In 1961, President John Fitzgerald Kennedy believed that if Vietnam fell to Communism, then so too would all the other South East Asian countries in the region.

In 1961, President Kennedy announced he would be sending 1,000 “military advisers” to ensure Saigon wouldn’t fall to the Communist North.

Obama’s announcement to send up to 500 additional “military advisers” came less than 24 hours after he announced: “We don’t yet have a clear strategy” for defeating IS. And the same day a State Department spokesperson said: “If the US led coalition went all-in, it would take three-to-five years to defeat ISIS.”

In 2008, there were more than 150,000 US troops in Iraq. Presumably “all-in” means that level of commitment, that level of escalation.

Although no one tied to the Obama administration is talking about “all-in”, and given a final decision by the White House has yet to be announced, it appears after months of behind-the-scenes debate the decision to ramp up US combat commitments has been reached.

Peshmerga-controlled Kurdistan does not pose the same threat to US servicemen as IS-controlled Anbar Province, thus there’s an increased likelihood the additional 500 US “military advisers” sent to the latter will sustain considerable casualties, which begets any number of variances of the following questions: what happens the day after a dozen US “military advisers” are killed in an IS-styled VBEID (car bomb) attack?

What happens the day after IS captures alive even one US operative? And what happens if, god forbid, US captives are executed - with their executions glorified in a high-production IS propaganda film?

The all-too-predictable answer to any of the above will be the deployment of additional US troops. An escalation of military force absent a clear strategy is exactly how the US involvement in Vietnam unfolded. By 1963, Kennedy had increased the number of US “military advisers” from 500 in 1961 to 11,000 in 1962. At the start of 1963, three US helicopter crew were killed transporting South Vietnamese troops into an engagement with the Viet Cong. By the end of that year, more than 50 US servicemen had been killed in action.

US casualties were one of the main drivers of mission creep in Vietnam, and by 1964 President Lyndon Johnson was reading from the same script as President Obama is reading from today. “We won’t abandon Saigon, and we don’t intend to send in US combat troops,” said LBJ. In other words, LBJ then, like Obama today, was gambling US “military advisers” would be enough to secure the corrupt government of South Vietnam.

When Obama says there is “no clear strategy yet” for defeating IS, what he means is there never will be a clear US military strategy for defeating IS in Iraq. The current non-strategy is to arm, fund, and train Sunni tribes in Anbar Province to fight IS.

Notwithstanding the obvious challenges of convincing the same tribes we convinced to fight al-Qaeda in Iraq (AQI) to also fight IS - remembering we and the Iraqi central government abandoned said Sunni tribes in 2010 - it’s impossible to defeat IS in Iraq without having a strategy for defeating IS in Syria.

Even if the US can help the Iraqi army retake Anbar Province and northern Iraq, IS will slip back into the territory they control in Syria and wait out the US. As was the case in Vietnam, the enemy in Iraq (IS) doesn’t need to win; they just need to hold on.

To underscore this conundrum, US intervention in Iraq has Iranian support. In Syria, it will be met with Iranian opposition - the same opposition that fuelled the initial insurgency against the US occupation in Iraq.

Defeating IS in Iraq might depend on a US military component, but it has a greater dependency on the political will of the Iraqi people. The US can’t make Iraq be the all-inclusive country it never was. We can’t supply the necessary will to fight. We tried that in Vietnam and it failed. South Vietnamese soldiers routinely fled their posts, or joined the other side. "'I wish they were on our side' was a comment commonly uttered by American officers," writes Stanley Karnow in Vietnam: A History.

To underscore this point, Mosul fell to IS less than four years after the US withdrawal from Iraq. Saigon fell to the Communist North a mere two months after the US wind-down. The answer is not perpetual occupation. Despite the ramblings of know-nothing US hawks and neo-cons, the US military can’t afford to occupy everywhere, all the time.

But with the US troop presence in Iraq climbing from zero to 3,000 over the course of the past 12 months, and as US casualties expectedly mount, the US hawks and neo-cons will demand further bombing and further troop escalation, minus a clear strategy for bringing about a lasting peace in Iraq. And it’s likely they’ll get their way. Why? The US has learned nothing from Vietnam.

Twain was wrong: history, as it turns out, can, and often does, repeat.