A poster of Benjamin Netanyahu and a noose prompted an investigation, with students and professors fighting off accusations of incitement Additions had been made to the original installation, including a poster depicting assassinated Prime Minister Yitzhak Rabin and a sign reading "This is called incitement (Photo Credit: Bezalel Academy)
By
Mary Pelletier
JERUSALEM - On a mild day in mid-January, the concrete steps leading into Jerusalem’s Bezalel Academy were crowded with students eager to get a spot in the warm winter sun. It was an open day, and the mood on campus was light and cheerful, as students crowded around booths showcasing and selling recent designs.
Last month, the atmosphere at Bezalel was not so idyllic. The 111-year old academy, one of Israel’s most respected art institutions, came under intense criticism after a poster hung at the school, depicting Israeli Prime Minister Bejamin Netanyahu and a noose, was widely shared on social media and throughout the press.

Almost immediately, Attorney General Avichai Mandeblit ordered an investigation into the student it for potential incitement. The students at the school reacted the only way they knew how – through their art.

Later the student was cleared of the charges and the case against her was closed, but the professors and the students continued to spread controversial artwork and open discussions to promote freedom of expression.

"I used to fight with designers, not politicians!” Professor Eli Petel said with a wry laugh, leaning back in his office chair, reflecting on the past month’s events.

Petel is the head of Bezalel’s Fine Arts Department, and was a target of online criticism after the poster was shared publicly.
He is also a well-respected professor and fine artist himself, and when the first-year student who created the poster was called in for investigation by the police, he accompanied her.

“This was a first-year student, only four weeks in the academy, and it was a Photoshop class. The assignment was appropriation – a very classic Photoshop subject," Petel said.

He explained that she initially decided to work with the Obama poster "Hope". She made a few versions and then she decided to say rope instead of hope, and she put a picture of Benjamin Netanyahu instead of Obama.

Her aim, originally, was to say that "there is a strangling" of hope, "the hope for peace, or the hope for human rights," according to Petel.

The poster was hung in the hallway of the academy for group critique, as is customary at Bezalel. An unknown person snapped a photograph of the poster, and it was eventually sent to Eli Hazan, the Head of External Relations of Netanyahu’s Likud Party, who shared it via Facebook.

As the shared image went viral, politicians began speaking out against the institution, including Miri Regev, the Minister for Culture and Sport, who wrote in a Facebook post:

“Artistic freedom is not freedom to incitement!...This is using artistic talent to incite murder...I call on the Minister of Education, Naftali Bennett: It’s time that you establish a boundary between art and incitement, and suspend Bezalel’s budget.”

'Artistic freedom is not freedom to incitement!...This is using artistic talent to incite murder'

Petel said he was very disappointed to get this kind of reaction from the Minister of Culture and Sport.

“We are dealing with images as a chemist would deal with chemicals. Maybe there is poison, but nobody is saying he is going to use this poison against anyone. This is a discourse and not something that is trying to get very fast reactions or cause incitement," he said.

Hateful emails and phone calls poured into Bezalel. The school made an active decision to protect the student’s identity, who is a Palestinian citizen of Israel, and insisted on a gag order. Until now, even after the investigation has been closed, school officials continue to keep her identity a secret.

The design featuring Netanyahu and the noose was originally hung as a group of multiple posters. After word of the investigation reached students, an unknown person made additions to the installation, taping an image of assassinated Prime Minister Yitzhak Rabin emblazoned with the word "traitor" to the centre. To the side, a sign read "This is called incitement."

On the internet, the evolution of the work was lost, and many assumed that this was part of the initial artwork, or that the poster had been reprinted and re-displayed.

In the days following the investigation, the students and professors at Bezalel began organising a protest. The first-year student was cleared of all incitement charges, but those on campus were keen to start a discussion about freedom of expression.

“At the beginning when I saw the artwork, I thought of nothing,” Tal Drori, a third-year visual communications student told Middle East Eye. “It was made by a student in the first grade, in the first semester, and it was very small. The good thing that came out of it was that after a few days, the debate was not about ending the funding for Bezalel, but about freedom of speech.”

Other reactionary posters began popping up around the Bezalel campus, and one in particular depicting a naked Netanyahu with a rope around his genitals, was shared widely online. The message on the poster read "Is this good, Attorney General?"
David Shayan, head of the Likud Youth Movement disagreed with the students and described both pictures as "shameful".
"I think that they made a mistake [by closing the investigation]. You can’t interpret the picture in a different way than the meaning of harming Prime Minister Netanyahu. I’m not against freedom of expression, but this is not freedom of expression. This is a red line that no one can pass," Shayan told MEE.
Art in the digital age

Days after the investigation, the campus held protests to address the right-wing criticism that had been levelled at the academy, with teachers and students taking part in equal measure.

Faculty members sent a letter to the Attorney General, emphasising the harsh blow dealt to academic freedom, and a noise installation filled the halls with alternating five-minute increments of silence and loud music and noise.

"I think that the main thing that bothered me throughout this whole thing is how easily we use the word incitement,” Elisheva Jacobs, a third year student in the Fine Arts Department said. “Instead of having a real conversation and instead of understanding, we just easily use that word."

Jacobs is part of Koma6, the academy’s online magazine, which reacted to the controversy by redesigning their pages to address the idea of "rope". The magazine sees the internet as its own artistic medium, and uses it to further discussions about art in the digital age.

During the protest, Koma6 set up a photo booth with a noose to show the absurdity of taking the poster out of the art school context.

“Bezalel, or any art school, is built around a lab," Jacobs explained. "You are here for four years and you’re working on very small moments. You create something, and you work it out, and you unpick it and try to understand what you’re doing. It’s not work that represents you in that way...And I would expect the Minister of Culture to understand the nuance of that.”

In the month since the protest took place, Petel has taken the experience and turned it into an artwork of his own. In a residency trip to Northern Ireland over the holiday, he hung a timeline of December’s events, illustrating the accusations of incitement with posters and information. He returned home to even more criticism in the Hebrew-language press.

"Here we are Arab, Jewish, religious and not religious, right wing and left wing, right wing Arabic, right wing Jewish, gays, and we are so mixed and it’s very diverse," Petel said. "I’m starting to think about how we as artists and as a community, can deal with this stuff and keep our values alive.” 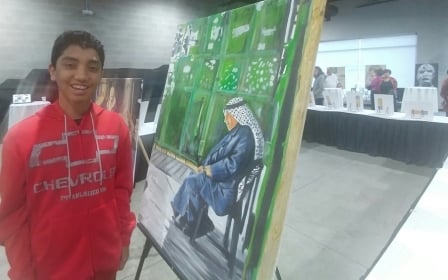