As half a million children in Gaza return to school, many still do not have basic school supplies 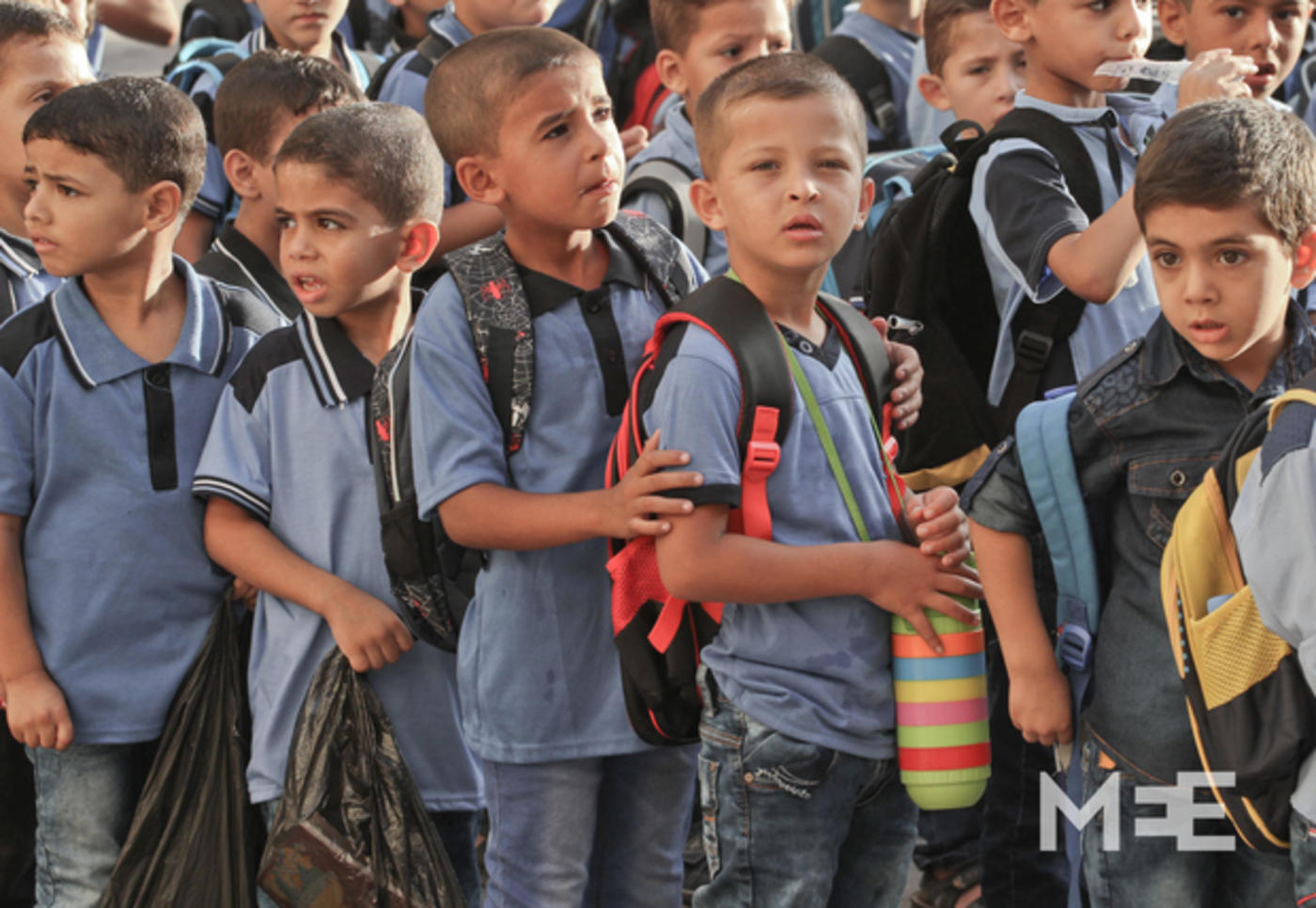 Gazan students stand for morning assembly. A number of them carrying bags their items in black plastic bags in lieu of school bags (MEE/Mohammed Asad)
By
Mohammed Omer

GAZA CITY, Occupied Palestinian Territories - Inside this classroom, not every Gazan child is happy. Many still do not have even the basic school kit needed for the upcoming academic year.

This lack of simple equipment is neither the fault of the students nor the parents - it is the economic effect of the ongoing Israeli siege on Gaza, in a world where education is generally considered a human right. In Gaza, half a million students are returning to school.

“I have no way to feed and clothe my children," he tells Middle East Eye. "So how can I possibly buy them school supplies?” His desperation shows in his tears as he sits on his doorstep in Rafah, in southern Gaza.

Six of Abu Lebda’s children attend school. For three consecutive years, his growing children have used the same clothes and school bags, which are falling to pieces. If they are lucky, one brother can share a pencil with his sister by breaking it in half and cutting the eraser in two pieces. They only dream of ballpoint pens and new notepads to record their lessons.

Every few days, Abu Lebda's wife, Umm Jihad, 45, says she has to mend the holes in the children’s school clothing, to the point where there are more holes than usable material and the clothes fall apart. She has given up trying to repair the school bags, she says, adding that her youngest children must resort to using plastic grocery bags.

Ten-year-old Sami, a keen student, admits to feeling sad when he sees other children in newer clothes, carrying their school materials, while he and his siblings cannot afford the same.

“I wish I could be like other children and just have a school bag and a whole new pencil to use for school,” he says as he puts his hand through a large gaping hole in his old backpack.

The UN agency for Palestinian refugees (UNRWA) provides educational services to Gaza; most schools in Gaza are run by the UN, given that the majority of Gaza’s population are refugees.

In his sauna-like house, Sami’s father admits to feeling helpless and unable to solve his children’s unhappy situation - but given Israel’s blockade and its effect on economic circumstances, he is unable to do much to reverse it.

“We haven't enjoyed summer holidays, nor have we prepared to go back to school,” says Sami.

Gaza is isolated, and many of the people of the Strip cannot find enough work to pay bills, buy fuel and feed and clothe their children properly. Shop supplies are short and prices expensive, so many can’t afford even the basic neccessities of life.

In the market of al-Shati refugee camp, 11-year-old Jibril stands beside a stall selling school uniforms. But he only has seven shekels ($1.78), and can’t afford to buy a shirt from the stall merchant to start his new school year.

The merchant can’t just give it to the boy free of charge - he also has a family to take care of.

“I’m sorry, but life is tough for all of us,” he tells Jibril, whose father passed away some years ago, leaving Jibril to find work to support his four siblings. He often works in the market, carrying boxes and bags just to earn extra money for family necessities.

Whatever he saves, he shares with his family, knowing that UNRWA will only give them a small ration of food. He also needs to buy extra vital supplies not provided by relief agencies.

“Sometimes I have to buy soap, so we can wash. Or some fruit, for vitamins. If I work with a fruit seller I can get left-overs at the end of the day,” says the boy under the hot sun. He wears an old pair of tattered slippers while moving around between the stalls.

Now the summer holiday is over and Jibril wants to return to school.

One can see the pride in his eyes. His hand holding his seven shekels has collected sweat as he presents the coins at each stand to try and buy his uniform.

Jibril realises that his family is not alone in its suffering. Hardship is a common daily situation in Gaza, where people rarely complain aloud, instead keeping their misery deep inside or behind closed doors. For many Gazans, it’s not good to complain, no matter how much you’re hurting.

Frustration is growing among families and merchants, as school supplies come into Gaza only sporadically at the whim of Israel. Sales are up and down according to employment, the economy and the way Israel controls freedom of movement into and out of the Strip. After Israel's deadly 2014 offensive on Gaza, sales were high. For those whose homes and possessions were destroyed, they had no option but to buy new supplies. Several charities were able to buy materials for needy homeless families. This year, there is a relatively small amount of aid arriving.

UNRWA itself faced this hard fact by instigating budget cuts, forcing it to discontinue some vital services, leaving the public with only UNRWA to blame.

However, the problem is much wider than this, says Phyllis Bennis, director of the New Internationalism Project at the Institute for Policy Studies in Washington DC.

“It is not UNRWA itself that is accountable for the insufficient financial help. The immediately responsible parties are UNRWA's donors, first and foremost the US, which brags about paying more than other countries but simply does not provide anything close to what its share of the world economy should mandate,” Bennis tells MEE.

“It's certainly understandable that Palestinian refugees - forced to rely on international​ aid because Israel's siege-style occupation prohibits any functional economic life - would be furious that rebuilding homes after Israel's military destruction of Gaza remains impossible, let alone when rations or access to education is cut.”

A month ago, Yassin Shadah bought several truckloads of school backpacks, hoping to sell them. But the market is disappointing this season.

“Many people come to browse, but cannot buy,” he says, while standing behind his stall in eastern Gaza City. Some of the items now gather dust from passing cars. There is not much he can do for now.

If no one buys from him, he is unable to pay his supplier. He is stuck between a rock and a hard place, while supplies are in demand but customers have no money to buy, as Gaza's economy verges on collapse.

Abu Eyad Khayyat, 46, walks with his wife and two daughters, saying he was hardly able to save money for his children’s school clothes and equipment. It was a choice of either clothes or new bags.

The choice does not please his two daughters, and certainly not his wife. But, he is unwillingly unemployed, and there is nothing he can do until the borders open and he can seek work.

In the past he worked inside Israel, earning up to 300 shekels ($76) per day in construction, but not anymore.

“Previously, I could afford most things for my family. But now, I can’t even afford cheap 'made-in-China' shoes," he says, as his wife looks at school uniforms for their daughters.

In the past, he bought good products for his children, but for nine years has not been outside Gaza, and therefore he can’t bring joy to his children’s new school year.

“It’s painful, as a father, not to be able to honour my children’s needs.”

He only wishes that his despair is not passed down to his children and grandchildren. However optimistic that feeling might seem under present circumstances, he lives in hope.

Merchants must wait until next year with the hope that the economy and sales improve, so they can clear the supplies that now sit and gather dust in war-torn Gaza.

“I’m not looking for profit, I just need to sell it so I don’t end up in jail for not paying my suppliers,” says Shadah. 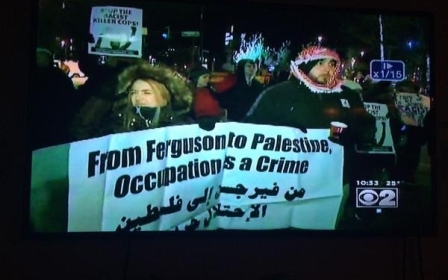