Iraq’s Shabaks return to devastated homes in battle against IS

Ethnic Shabaks are coming back to their homes after having been driven away, but they have lost trust in everyone around them 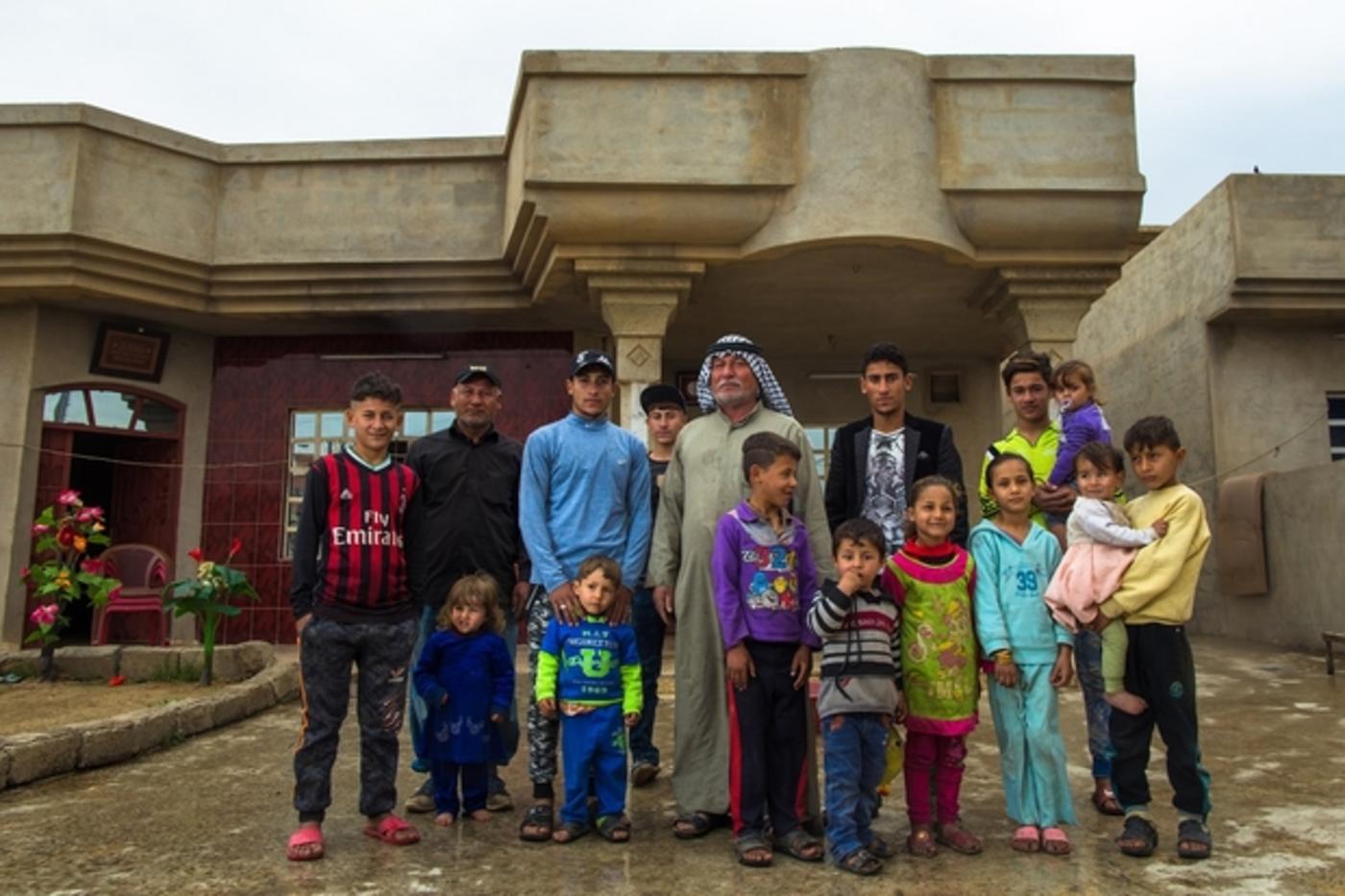 Moqdad Hassan Ismaeil al-Barghout and his family outside his home in the village of Khazna Tappa, just east of Mosul (MEE/Joao Castellano)
By
Sam Kimball

KHAZNA TAPPA, Iraq - Drizzle patters over the village of Khazna Tappa, east of the embattled city of Mosul, as members of a Shabak militia stamp their feet tensely in the chilly grey air, assault rifles slung over their body armour.

The tiny village, which lies on the green plain of Iraq’s Nineveh province, is home to a growing number of returning families from the Shabak ethnic group who were pushed out of their lands spread over the province, or killed by al-Qaeda and Islamic State (IS) group militants.

When Moqdad Hassan Ismaeil al-Barghout opens the gate outside of his partially burned-down concrete home, the security guard standing outside the gate relaxes as he comes out to greet us.

“We were gone for two and a half years,” said Barghout, adding that his family only returned in February, when they felt it was sufficiently secure.

But when Barghout’s family returned, they found many of the houses in Khazna Tappa had been burned. Half of Barghout’s family home was torched; glass shards covered the floor and snarled black plastic where a cheap plastic door frame once stood evoked images of what used to be. Now the family crowds into a single room upstairs.

'They wrote, ‘This is a Christian home,’ or ‘This is a rawaafidh (Shia) home,’ on the doors. Locals helped them identify who was who'

“IS, with their traitors, burned the houses,” he said, claiming locals helped the militants carry out their attacks.

“They wrote, ‘This is a Christian home,’ or ‘This is a rawaafidh (Shia) home,’ on the doors. Locals helped them identify who was who,” he added. Barghout and his family are Shia Muslims, one of several ethnic and religious groups chased out or killed by IS and its supporters.

Pressure on many fronts

Iraq’s Shabaks are under pressure on many fronts, with both al-Qaeda and IS targeting Shabaks for their non-Sunni religious practices.

Many Shabaks say they have lost trust in the government in Baghdad for being unable to protect them. They also accuse the Kurdistan Regional Government in Iraq’s north of putting pressure on them to identify as Kurds in order to take control of their lands, and Mosul itself.

According to the BBC, the number of Shabaks are estimated between 250,000 and 400,000. While they often identify publicly as Muslims, with the majority being Shia and the rest Sunni, some among them also practise their own syncretic faith.

Some Shabaks follow holy men called pîr who are knowledgeable in religious doctrine. This Shabaki faith incorporates elements of Shia Islam, while keeping its own unique practices.

In practising their faith, they visit Yazidi shrines and travel to the Shia holy cities of Najaf and Karbala for pilgrimage, instead of Mecca, regarded as the holiest city in Islam.

The Shabaks also speak their own distinct dialect, Shabaki, claimed by some Shabaks to be a separate language. Though it is related to Kurdish, it is not fully comprehensible to Kurdish speakers.

Barghout and his family fled Khazna Tappa in August of 2014, as IS consolidated its hold on Mosul.

The Kurdish Peshmerga forces, instrumental in the fight against IS, withdrew from much of Nineveh, including Khazna Tappa.

“On August 8, 2014, when the Peshmerga withdrew, we were the last ones out,” said Barghout. “We fled to Diwaniya (a city in southern Iraq) and then to Basra,” he said, referring to Iraq’s main port on the Persian Gulf.

When IS made its rapid onslaught across northern and western Iraq in August 2014, Yazidis - another unique religious sect of the region - were persecuted in the IS advance.

The widely publicised killings garnered international attention, and served as a justification for America’s re-entry into Iraq.

In June 2016, the UN said in a report that IS was committing genocide against the Yazidis in Syria and Iraq to destroy the community of 400,000 people through killings, sexual slavery and other crimes.

Echoing the claims of others, Barghout said that local armed forces - in this case, the Kurdish Peshmerga forces- may have tolerated attacks on Shabaks in order to scare the small community into investing their loyalty in whomever could offer protection. That authority, he believes, was the Kurdish Regional Government (KRG).

Barghout believes the Peshmerga, as well as other armed forces, are vying for control of Shabak lands in order to seize resources.

“All of them want Shabaks to give loyalty because of the oil underneath Shabak land. There’s oil in [the districts of] Hamdaniya and Sheikhan. The village of Badaniya al-Kabir has oil,” he said, referring to areas in Nineveh with Shabak populations.

Not everyone shares Barghout’s view that the Peshmerga forces intentionally abandoned the Shabaks of Nineveh to their fate at the hands of IS.

'[Mosul] has become a tomb for minorities'

Khaled Ali, a spokesperson for the Kurdish National Congress, an organisation that is seeking to unite various Kurdish parties, defended the Peshmerga.

“The Peshmerga is part of the Iraqi defence forces generally. It has within it all groups and sects,” he said, noting the Peshmerga’s multi-ethnic volunteers. He stressed that this is evidence that the Peshmerga does not discriminate against any ethnic group.

Referring to the withdrawal from Shabak villages during the IS offensive that Barghout spoke of, Ali added: “Even Erbil was threatened by IS. Their expansion was something never seen before. Daesh (an Arabic acronym for IS) took over Mosul despite two army brigades, who fell before them. The Peshmerga simply couldn’t hold the territory.”

Yet like other minority ethnic groups across Iraq, the violent persecution of the Shabaks goes back well before the rule of IS.

The Shabaks were victims of the Iraqi government’s "Arabisation" policies and Saddam Hussein’s Anfal campaign in the 1980s, in which Iraqi forces carried out sweeping imprisonments, executions, and mass deportations of Kurds and other minorities in northern Iraq.

They were driven from their villages to internment camps for refusing to identify as Arabs, because of their language, and a history of marginalisation by Arabs in the area. But the violence, locals said, reached a boiling point after the American invasion in 2003.

“In 2009, al-Qaeda sent two truck bombs to the village during the dawn prayer. They destroyed the heart of the village. There was almost a square kilometre of complete destruction,” said Abu Kawther, a Shabak militia officer in Khazna Tappa who declined to give his full name.

Suria Mahmoud Ahmed, a Shabak activist who runs an NGO called the Shabak Women’s Association, mostly blames the Kurdish authorities for their troubles. “We suffered so much under Saddam’s regime. We couldn’t even call ourselves Shabaks, just Arabs,” said Ahmed, in a hotel lobby in Erbil, the Kurdistan region’s capital city.

'We suffered so much under Saddam’s regime. We couldn’t even call ourselves Shabaks, just Arabs'

“Yet after 2003 we saw that it’s the opposite. Now there are Kurdish parties who want to control the minorities, and who call them not what they are; they call them Kurds," she added.

She also cited the 2008 murder of Mullah Abbas, a Shabak political leader, only a few hundred metres from a Peshmerga checkpoint. Abbas was the head of the Shabak Democratic Gathering, a group that opposes the inclusion of Shabak areas into the Kurdish Regional Government territories.

According to a 2009 Human Rights Watch report, Peshmerga forces did not pursue the killers and no one has been held accountable, despite calls by UN officials to bring the killers to justice.

“And the car with the assailants which killed him came from the Asayesh (Kurdish intelligence organisation) checkpoint,” said Ahmed, raising her eyebrows with suspicion.

MEE requested comment from the KRG and the Peshmerga on the previous claims but they did not respond by the time of publication.

Standing in his combat boots in the grey cold at a military post just outside eastern Mosul, Abu Jaafar al-Shabaki, a commander of a local Shabak militia attached to Iraq’s Popular Mobilization Units militias - groups of armed fighters mobilised to fight IS, but themselves accused of grave human rights abuses - said politicians on both sides are trying to weaken the Shabaks’ independent identity.

“There are political parties that are trying to sow fear in the hearts of citizens. The [ruling] Kurdistan Democratic Party (KDP) doesn’t want to see a Shabak force. It wants to control the area [where they live]. If they take Shabak lands, they take Mosul,” al-Shabaki said, noting the fact that many Shabaks live within Iraq’s second-largest city.

'If they [the Kurdistan Democratic Party] take Shabak lands, they take Mosul'

Not only that, he said, “but the KDP will get more votes in parliament. You control people, you get their votes. They want to make the Shabaks into Kurds for this reason.

“But can you show me one Kurdish grave in this area? You can’t. It’s all Shabaki, Yezidi, Christian, or Turcoman here.”

He added that the thousands of Shabaks displaced in the IS assault on Nineveh need Baghdad to help compensate them, so they can return and rebuild their destroyed homes, and get basic services like water and electricity.

But Salem Muhammed al-Shabaki, who sits on the required quota seat for Shabaks in the Iraqi parliament in Baghdad, denounced Abu Ja'afar for his claims saying that he has no right to speak on Shabaki affairs because of his affiliation with the Popular Mobilization Units.

'Popular Mobilization Units do not represent the Shabaks. They represent a foreign Iranian agenda in Iraq. We won't accept their sectarian agenda."

However, he acknowledged that previous Iraqi governments, like that of Prime Minister Nouri al-Maliki, laid the basis for the Shabaks' tenuous situation today, claiming that al-Maliki gave up the city to IS control, and thus, the extermination or eviction of local Shabaks.

In 2015, an Iraqi parliamentary panel called for former Prime Minister Nuri al-Maliki and dozens of other top officials to stand trial over the fall of Mosul under IS control in 2014.

While Salem believes the current government of Prime Minister Haider al-Abadi is doing better at governing, he said it's too late for the Shabaks to place their faith in Baghdad.

'We have lost trust in Baghdad's ability to protect us. We won't be returning to Mosul. It has become a tomb for minorities.'

'But can you show me one Kurdish grave in this area? You can’t. It’s all Shabaki, Yezidi, Christian, or Turcoman here'

For Abu Kawther, the militia officer in Khazna Tappa, the problem the Shabaks face is that neither Erbil or Baghdad will take charge of their safety.

“Whenever a bombing happened, the Kurdistan authorities said it’s the central government’s responsibility. Then the police and the army say, ‘It’s the Kurdish forces that should protect you.’ So no one took responsibility.”

So the Shabak are taking protection upon themselves, said Kawther. “By now, our boys from the area are taking charge. The important thing is that we keep our areas, and our people, safe.”