Israelis, Palestinians reflect on Nakba together at controversial festival

Despite controversy, the Nakba Film Festival offers Israelis and Palestinians an opportunity to reflect on quests for identity, belonging 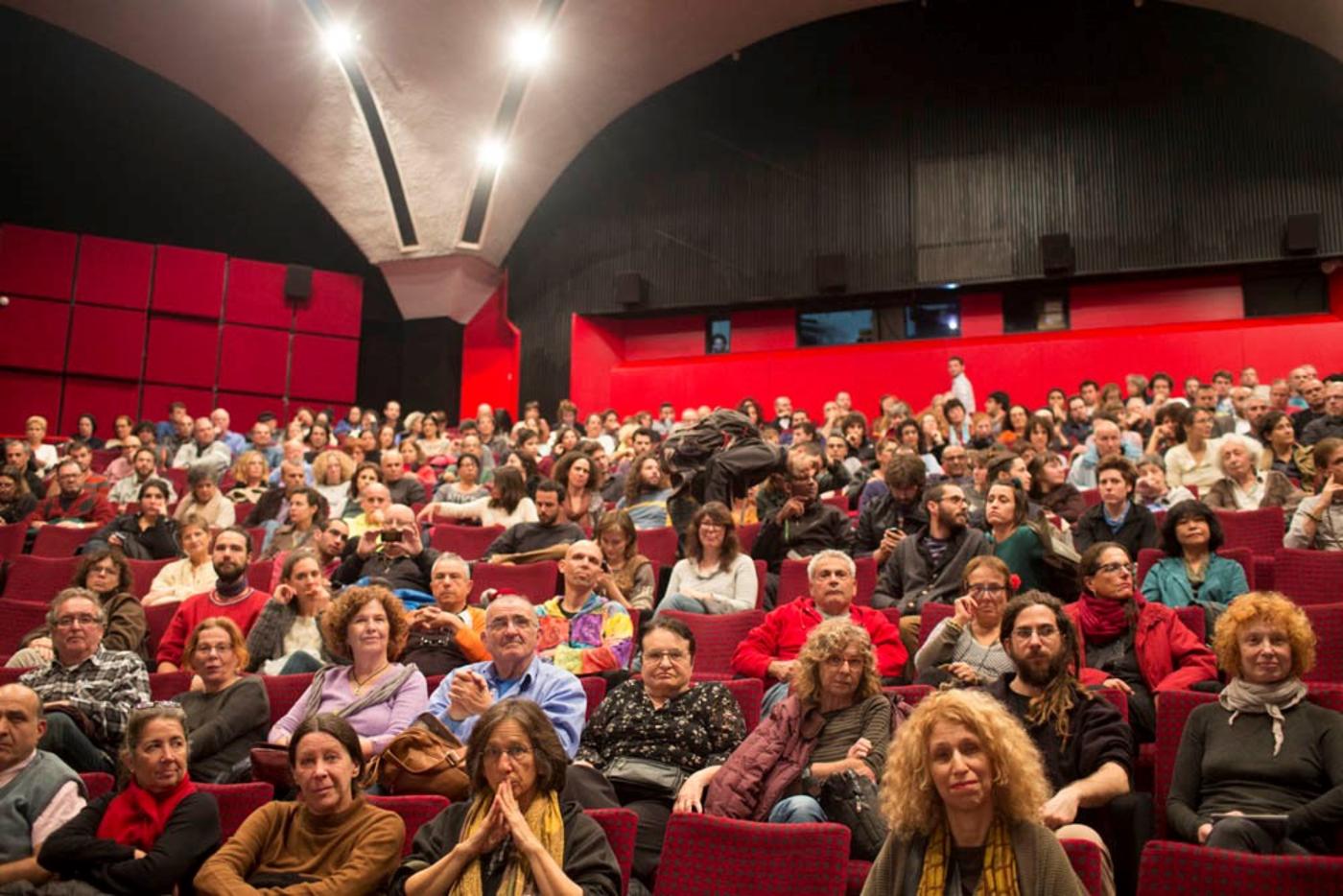 TEL AVIV – This year’s Nakba Film Festival sparked controversy when the Israeli Minister of Culture and Sports declared that the arthouse and film archive hosting the event should no longer receive state funding.

“It is an unreasonable situation, in my view, when an entity that is supported by the State of Israel enables the holding on its premises of a festival devoted entirely to preaching that the day on which Israel was founded is a day of mourning,” Limor Livnat said in a statement released by the ministry late last month.

But it would seem, say organisers, that Livnat inadvertently did the second go around of the festival a favour by calling for the cutting of public funding to the Tel Aviv Cinemathèque: some 300 people, most of them Jewish Israelis, attended the opening for the festival held last week.

The festival is an opportunity to introduce the Palestinian narrative on the Nakba – past and ongoing – to the Israeli public.

“This year we can see the presence of more people, thanks to the publicity of Limor Livnat,” says Liat Rosenberg, director of Zochrot, a Tel Aviv-based non-profit which curates the festival.

Alon Garbuz, director of the Cinemathèque, said: “Last year it was very quiet, no protest from the government or anyone else, but with the coming elections…They can do whatever they like, but we are not afraid about them cutting the budget.”

For Rachel Leahjones, an Israeli filmmaker participating in the festival, the government’s uproar is “ironic because it has become more and more rare for Palestinians to be willing to share their work with Israelis. So it’s a gift really and not to be taken for granted. Then along comes a Minister of Culture who fears that these filmmakers are exercising their right of return through a DVD or a password protected downloadable link to their films.”

“It’s not the worst thing the government has done,” continued Leahjones, who directed the 2002 documentary “500 Dunam on the Moon” about Ayn Hawd, a Palestinian village that was captured and depopulated by Israeli forces in 1948.

“We know the state does much worse things, but what I think the Minister of Culture doesn’t realise – or perhaps she does – is that in fact that she is making it impossible (we’ll do it anyway) for Israeli Jews to contend with their own history, and their own role in that history.”

Three short films, specially made for the festival by Israeli directors, presented unique approaches to the Nakba and how it is perceived by Israelis.

“The National Park” by Amir Yatziv revealed the physical traces left by the Palestinians’ historic presence and how this was hidden or obscured after the creation of Israel; “Welcome Back” by Guy Königstein explored the practical question of the return, through the filming of a group of Israeli Jews preparing an event to welcome back Palestinian refugees; and “All Rights Reserved” by Laila Bettermann and Anael Resnick undertook a quest to retrieve the identity of a Palestinian house and its previous Palestinian inhabitants by two Israeli tenants;

For “All Rights Reserved”, Resnick and Betterman moved into a house previously owned by a Palestinian and starting digging into its past. Bettermann explained in a post-performance discussion how the current Jewish Israeli owner felt threatened by the process and complained that it was questioning her ownership on the house and “disrespectful to her parents”.

Resnick added: “In the process we found out that we could hurt the [current] owner of the house and that she could hurt us. Now we have this big thing in our hands and it’s a big question what to do with it. She wouldn’t search by herself.”

The current owner refused to participate in the movie and some of the possible former Palestinian owners were also reluctant to be involved. But the directors decided to go through with their project anyway, portraying the characters with objects and explaining the whole process of their quest and its difficulties.

The directors said that they did not struggle with their identity and belonging in exploring the Nakba in the same way as the home’s owner. “We’re very privileged, we both have a non-Israeli passport. We can leave whenever we want,” said Resnick.

“On the one side, not being completely Israel, being born outside [in France], is easy not to identify. There is for us a possibility not to live here. It gives us a perspective,” said Betterman. “We don’t really have this feeling of belonging to a land, this sense of ownership, so it’s easier for us to ask questions and to criticize it. There are many moments when I doubt it, during this summer and the war on Gaza for example. Why stay here at all? On the other hand, language, culture, there is this stubbornness to be here and to do something about it.”

“Questioning your identity really doesn’t have to be a crisis – it can actually be liberating,” said Leahjones, who was born in the US and raised there and in Israel. “The minute you say ‘Okay, I’m the bad guy in the story, how do I redefine myself in terms that make sense to me so that I don’t have to be the bad guy,’ it’s not hard at all. There’s actually a lot to work with.”

“Israelis have a lot of work to do on re-defining their own narrative, re-interpreting their own selves in this story,” explained Leahjones. “I think that the documentary moment we’re at now – and it’s long overdue – is a moment of looking inward at ourselves critically. Objectifying the Israeli subject if you will. What is Israeliness made of and how did we reach the point where Jews from North Africa, the Middle East, Europe and America have come to share the position of being a multi-generational occupier?”

The question of identity and of the sense of belonging to the land is also a struggle often portrayed in Palestinian cinema, both through Palestinians still living on their own land and among Palestinian refugees – and was a topic close at hand at the festival.

This very feeling is distilled perfectly in the movie “A World Not Ours” by Palestinian refugee Mahdi Fleifel which was screened at the festival. The film explored the daily life of the Ain al-Hilweh refugee camp in Lebanon. Not actually living in the camp, the director’s feelings are split between belonging and being an outsider, while exploring the inhabitants’ feeling of imprisonment both physically and in the idea of the return, which moves further from them with the years.

Featuring films by both Israeli and Palestinian filmmakers about the Nakba, Zochrot sees the festival as a way to enable Palestinians to speak with their own voice and not to rely on Israeli filmmakers to be their spokespersons.

“For many years, Israeli documentary film was premised – and ‘500 Dunam on the Moon’ falls within this category – upon ‘giving voice to Palestinians’,” explained Leahjones. “As if Palestinians couldn’t give themselves a voice. As if the Palestinians didn’t have an audible voice, or multiple voices. The problem isn’t in Palestinian vocal chords. The problem is with Israeli ears – when it comes to Palestinian suffering, it’s as if they cannot hear. And somehow Jewish Israeli documentary filmmakers got caught up in the role of self-appointed mediators or interpreters of that suffering.”

To fill this void, Zochrot is also presenting a series of movies dealing with Palestinian rhetoric on the Nakba, including “1948’ by Mohammed Bakri, “The Turtle’s Rage” by Pary El-Qalqili and “Ismail” by Nora Alsharif.

Two movies – “Where Should the Birds Fly” by Fida Qishta and “Flying Paper” by Nitin Sawhney and Roger Hill – will also give the opportunity for the Israeli public to get an inside view of Gaza, something that was important for Zochrot organisers after the devastating war this summer.

“It was quite clear that we wanted films about Gaza because we also wanted to show the part that is ongoing, the ongoing Nakba,” explained Liat Rosenberg.

“It’s not just historical reality – it’s a day-by-day evolving of the conflict,” agreed Leahjones. “The question is not whether there was or wasn’t a Nakba. The question is how much longer will it keep going on?” 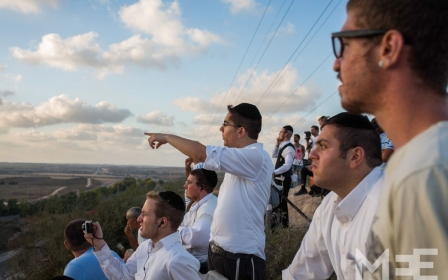 Inside Israel
For young Israelis, the other side ‘simply does not exist’