‘It is hell’: Chronicles of military conscripts in Egypt

For many Egyptian men, the military means sidestepping moral beliefs, humiliation, cheap labour, and fear of being sent to the dreaded Sinai 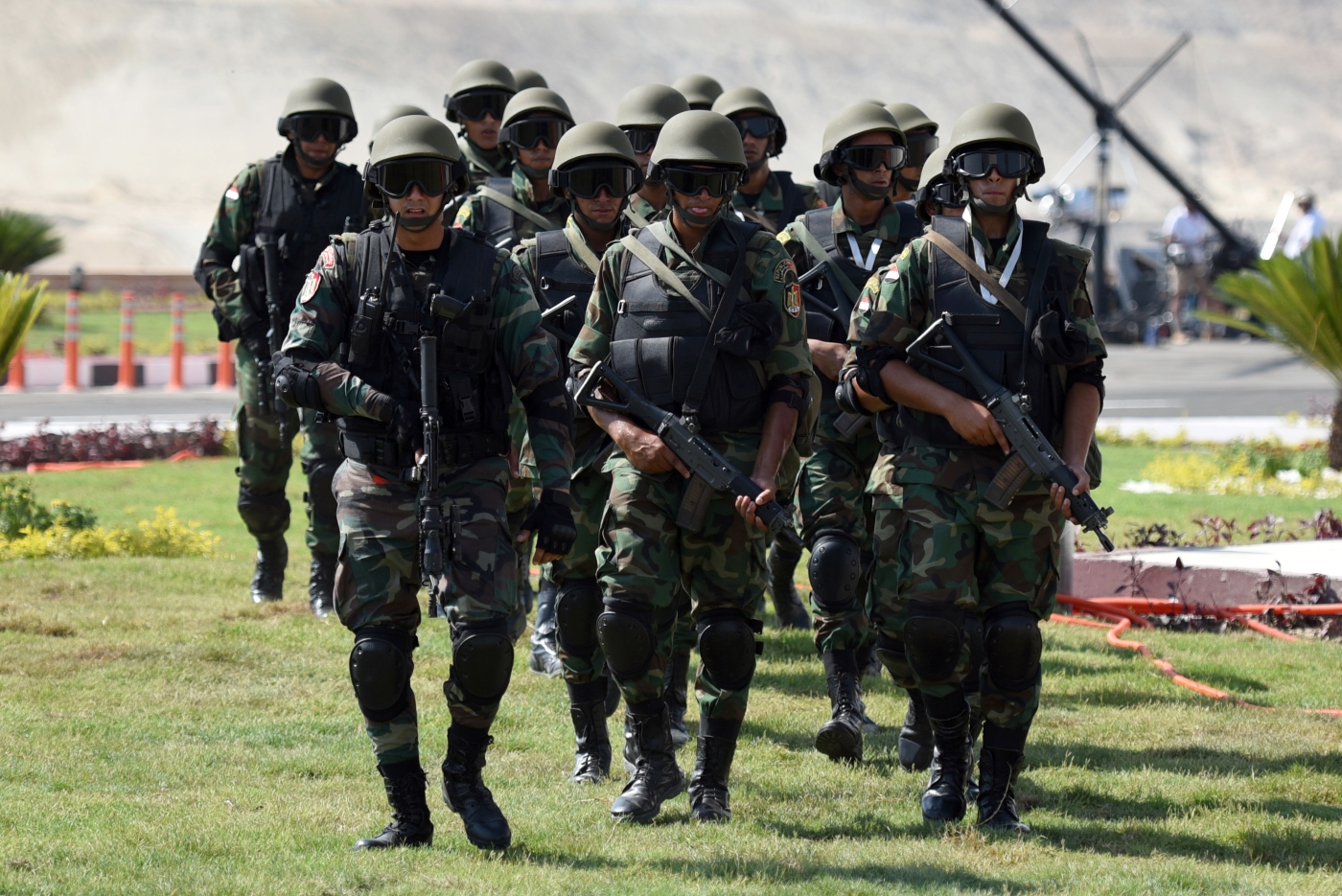 Egyptian soldiers march on the bank of the Suez Canal during a ceremony on 6 August 2015 to unveil a new waterway, in the port city of Ismailiya (AFP photo)
By
MEE correspondent

CAIRO - “My entire life is on hold because of this decision,” *Omar, a philosophy student at Cairo University said as he recounts the consequences that followed his decision to conscientiously object to the compulsory military education course at his university.

The course, comprised mostly of military exercises and designed to teach discipline and loyalty, serves as a prerequisite to the time that these young men will have to serve in the army, which is mandatory for all Egyptian men between the ages of 18 - 30; although voluntary enlistment can start at 16.

Without taking this course, students cannot graduate. The young men are required to enlist in the military upon graduation. Additionally, they cannot travel abroad without getting security approval from military authorities. After 30, men are no longer obligated to enter the military.

“I cannot get my diploma or call myself a graduate. I cannot travel or get a passport,” Omar fumes. “There are a lot of threats, and even to my family… My father was interrogated while he was at work, because of my decision.”

In September, Omar released a statement on his social media accounts publicly explaining his request to be exempted from the military education course and detailing how this appeal was rejected by the president of the university, Gaber Nassar.

Omar claims his Facebook account was soon after hacked. “I logged in and found that all of my posts about being a conscientious objector had been set to "only me" in the settings, so only I could see my posts but none of my friends could. I didn’t understand how that could have happened since I certainly didn't do that.”

“I don’t think the military institution has a right to be involved so much in the university, let alone determine who gets to graduate or not based on this course,” Omar said. “When I entered the university, I majored in philosophy and expected to be taking academic courses on that subject. I didn’t sign up to a military diploma.”

'I don’t think the military institution has a right to be involved so much in the university, let alone determine who gets to graduate'

Women in Egypt are not required to join the military, which critics like Omar argue is an inherently sexist institution. Others have repeatedly called out the institution for practising gender-based violence in the form of virginity tests, which were conducted on female protesters after March 2011, and later declared illegal in December 2011.

Yet there are women who have been calling on the authorities to let them join the military, primarily a group called "Moganada Masriya," which translates into "Egyptian [female] conscript," from Arabic. These women argue that they would be fulfilling their "national duty," and "serving their country". For now, the only fields women can work in within the army are related to nutrition, nursing and psychology.

In the meantime, Omar, a pacifist, does not know what he will do when the time comes to enlist in the army, when he may have to serve for at least a year after graduation. “Forced conscription for me is a nightmare. It embodies everything I am against,” he said.

'Forced conscription for me is a nightmare. It embodies everything I am against'

Omar is not alone in these worries and his reservations are echoed by many other young men. *Mostafa, who has just graduated with a law degree from Cairo University and aspires to become a human rights lawyer, recently had to make the dreary trip to the conscription office.

After an entire day of waiting in the sun, the officers said that those who had higher degrees had to come on another day. “We’re literally slaves for them,” Mostafa said irritably, and he does not expect to get an exemption.

Hundreds of thousands of young Egyptian men are enlisted into the military annually, and can be exempted only in a handful of cases, usually if they are the only son in their nuclear family or if they can be excused on medical grounds.

Other cases of exemptions are even more vague and can cause the young men more harm than good in the long run. For example, *Tamer who has already served a year in the military, told MEE that medical examinations include homosexuality tests.

“You bend down and spread [your legs] and if they find [the anus] bigger than usual, they assume you’re gay and exempt you,” Tamer explained, “which tells you a lot about their medical mentality,” he said, poking fun at the time Egypt’s military claimed it had invented a device to cure Aids and Hepatitis C.

“I don’t know anyone who was let go [because of this],” Tamer said, “but rumours say he gets a special red‐coloured exemption that tells any [job] recruiter that he’s gay.”

*Zayn, a tech-savvy young man who now works at a start‐up coding company, who also narrated his experience in the army to MEE, said that officers will ask if you or a member of your family belong to the now‐outlawed Muslim Brotherhood. Young men may be exempted if they say yes, but given the crackdown now taking place on members of the group, it is unwise to do so. Zayn speculates that this may be a way to steer the men into the radar of Egyptian state security.

Mostafa is not a member of the Brotherhood, but is a liberal political activist and fears his past activities may make him susceptible to harassment from the officers, or state security. “This is a result of all the past years in which the army was directly involved in politics.”

“Of course I’m worried, all these memories of Mohamed Mahmoud, the Cabinet of Ministers, Abbaseya, and all of the times that the military dispersed civilians’ sit‐ins, they are all still clinging to my mind,” he said, referring to a number of massacres that the military has been involved in since 2011.

A number of young men have attempted to dodge conscription in other ways, usually by stalling their graduation until they are 29, or by leaving the country until they turn 30 when they are no longer eligible to serve in the army. Omar had considered doing this, but ultimatley decided “I would be wasting a lot of time and a lot of my future and I am not someone who likes to avoid standing up for my rights”.

For Omar as for others, the military institution is intrinsically discriminatory, on the basis of gender, class and race. If you have higher education, which is usually a result of your class background, you only have to serve one year. However, if you have not been schooled, you serve three years. It is openly discriminatory, he argued.

According to the World Bank, in 2014 Egypt had 835,000 military personnel. As for those who have already served their military conscription years, the least that can be said of the experience was that it was humiliating and draining.

Tamer and Zayn considered themselves “lucky” that they did not end up in Sinai.

Instead, they, along with their colleagues, formed a cheap labour force for the high‐ranking officers in which they were made to carry out the generals’ chores. Others are made to sell military products such as pasta, or to take part in building military infrastructure. Conscripts usually get paid a mere 250 to 300 EGP ($28-$33) per month for their efforts.

“It is hell,” Tamer, saying. “I advise every single person I meet who hasn’t done it yet to do whatever it takes, including bribes and [things] I normally oppose, to avoid being conscripted into the army.”

Zayn affirmed this, said that the year felt like “prison,” despite the fact that he managed to get a lighter workload given that his family knew a high‐ranking officer. “None of my skills were put to use,” he told MEE. “I mostly had to clean and do janitorial work.”

During the day, Zayn would do his “service” which consisted of just standing in the sun holding a weapon. Later, he became a conscript for one of the high‐ranking officers, which meant he had to run errands for him. “Usually, you won’t want [the officer] to know you have a car because then you will become his family’s driver.”

Tamer had similar chores: “One day I cleaned and stood beside a carpet to "protect" it from anyone stepping on it – except the general and his visitors. I swear that was it. The second was making tea and coffee for the guests.”

Humiliation at the hands of the military generals is part and parcel of the conscript’s daily life, the young men explained.

“I remember this one time [when] an officer cursed me for not being tidy. It was simply because my eyes were red. I told him I was awake all night doing work. He asked: 'Do you work in a night club or what?' I told him 'no sir, in a library. I own a library.' He answered: ‘And I own a prison. Do you wish to go to prison?’ I replied curtly: No,” Tamer narrated.

Zayn also recounted what he saw as the “unjust” treatment of his brother whose experience had been different to Zayn’s despite the same family connections. Zayn’s brother, who is a medical doctor, has a back injury and should have been given a medical exemption, “but they didn’t give it to him because they need doctors to treat the officers”.

The even more unlucky conscripts may end up going to Sinai, which is by far the most feared fate, and is a dread that regularly creeps into Mostafa’s mind as he gets ready to learn his military fate.

According to Zayn and others, because there are so many conscripts, most of them are not well‐trained, including the ones that get placed in Sinai. Over the past few years, dozens of conscripts have been killed in Sinai, while critics have pointed blame at a military institution that does not prepare them for such confrontations.

Earlier this month, a militant group, Ansar Beit al-Maqdes, claimed responsibility for an attack on the army in Sinai and killed at least 12 soldiers, prompting many to further criticise the military for what they see as incompetence. Social media users shared photos of the young men online, while others shared their experiences dealing with negligent military officers.

“Instead of forcing everyone to get conscripted, why don’t you just make it optional and train people adequately?” he asked.

*Names have been changed for security reasons. 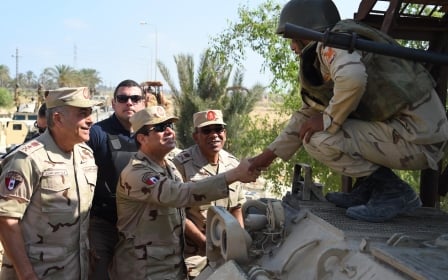