The Jewish and Muslim merchants of Djerba

For centuries, a community of Jews has lived peacefully alongside their Muslim neighbours on the island of Djerba, off the coast of Tunisia DJERBA – These are busy times for Nissem Bittan, a Jewish jewellery salesman in the heart of the old city of Houmt Souk. Customers keep walking into his shop, which seems to be constructed solely out of lavishly plastered ceilings and walls and handcarved wooden showcases.

The customers dig deep in their pockets and take out jewels and gold they want to sell. It’s just before Eid al-Adha and people on Djerba are running out of money. On the island just off the coast of Tunisia tourism is the main source of income, but it became almost non-existent after terrorists hit the Bardo Museum in Tunis in March and the beaches of Sousse in June, leaving almost 60 dead in total.

“People don’t have money but they still want to buy a sheep for their family (as part of the Eid tradition). So they sell their jewelry to us,” says Bittan, a 52-year-old in shorts and a striped shirt who was born and raised on Djerba.

Bittan runs one of the many jewellery stores in the old city of Houmt Souk, the small capital of Djerba. In those narrow streets, Jews and Muslim merchants have been working side by side for centuries, relatively secluded from the outside world. He has Muslim friends, Bittan says, although they don’t really come over to each others houses for dinner a lot and "there are certainly no inter-marriages" between the two religious groups. “In Tunis that might happen... maybe,” he says. “The Jews there are a bit more liberal. But here, no. It’s a religious thing, we don’t blend. But we still respect each other.”

Gifts for the feasts

In the last few weeks the two worlds on the island overlapped even more than usual, as the Jewish Yom Kippur and the Muslim Eid al-Adha were celebrated in the same week. “Sometimes we give each other gifts on days of feast,” says Taoufik Mihoub (49), a Muslim who has been without much work since tourism in Tunisia collapsed.

He sits in the jewellery shop of his friend Youssef Yaich (48) on one of the corners of the Rue de Bizerte. “I drop by whenever I’m in the neigbourhood and we talk a bit. Friendship between Jews and Muslims is normal here.” Maybe even more so than among the Jewish salesmen themselves, Mihoub says. “They may not tell you, but there's sometimes a lot of jealousy between them because the competition in the sector is so hard.”

It is said that Jews fled to the island after the destruction of the first temple of Solomon, around 410 BC, according to the Jewish calender. Legend has it that the El Ghriba synagogue in the village of Er-Riadh, at the centre of the island, was actually built with stones of the destroyed temple brought by Jewish refugees. The community has been on the island ever since, protected by the sea surrounding it, and the oldest synagogue of Africa has never closed its doors.

The claims of a direct link to the Temple of Solomon makes the synagogue a destination for Jewish pilgrims. Every May thousands of worshippers gather on the island. They used to stay in the white and blue building across from the synagogue, says Khmaies Haddad, in small Spartan-like rooms with just a bed and a table. But in recent years, pilgrims prefer the luxury of Djerbas’ hotels over the sparse rooms.

Haddad is one of the older folk who come to pray in the small El Ghriba synagogue almost every day. From nine to 12 he sits on the wooden benches of El Ghriba, with a bowed head and eyes closed. Around 12 he takes a break in his room in the guesthouse, after which he resumes his prayers and thoughts again until five. “I don’t live here though. I live in Hara Khbira, a Jewish quarter. Until the 60s only Jews used to live there,” he recalls. “But after the 60s many left to go to France and Israel. Now it’s a mixed area, only 40 percent of the inhabitants are Jewish, 60 percent are Muslim. But we all get along.”

It hasn’t always been like that, though. Before World War II Tunisia was home to around 300,000 Jews, says Jacob LeLlouche, many of whom had French nationality. LeLlouche is a good humoured hippie-like man who runs one of the only kosher restaurants in the Arab world. On top of that, he is a leading member of Dar el-Dhekra in Tunis, a society that documents the history of Jews in Tunisia.

“After the state of Israel was established the French traded 35,000 Jews with Israel, against the value of a bag of wheat per person. Those 35,000 people were hardly what you’d call the elite. They were the poorest of the community, some were prostitutes, thieves, prisoners. They didn’t go to Israel for ideological or Zionist reasons, but simply because they dreamed of starting a new life.”

After Tunisian independence in 1956 many Jews left for France, and following the Six Day War of ’67 another wave of Jewish people left Tunisia. “Troubles happened, for example the big synagogue of Tunis was set on fire,” says LeLlouche. “Many left and went to France, the United States and Israel. And from then on the numbers diminished further. Parents sent their children to Paris to study and many stayed there. Now there are around 1,400 Jews left in Tunisia, most of them on Djerba.”

The community on Djerba has remained stable in recent years, even after the El Ghriba was hit by a truck loaded with explosives in April 2002, leaving 19 dead. Ever since that attack the Tunisian authorities upped the security of the synagogue, partly paid by the community itself.

The community has even been growing slightly, says Ezekiel Haddad, one of the leading figures in the community. “Mainly due to the fact that our families live in a traditional way and have many children. Two or three are rare, most have at least six or seven. We try to keep our tradition very much alive, for us it’s the only way to to survive.”

He admits it’s hard though. Since the Tunisian revolution of 2011, four or five families have left the island. And then there is the Internet and Facebook, which allows the world to enter into the closed community. “If the times in which you live change, the new generations also change and there’s a possibility it will water down traditions, as we have seen happening in other places like Morocco. We do what we can to keep that from happening here, but it worries me.”

Back in the small streets of the old city of Houmt Souk, a few kilometres from the Jewish quarter Hara Khbira, Nissem Bittan regularly leaves his store unattended. He goes looking for the items his customers have requested; if he hasn’t got the required golden necklace or bracelet himself, the chances are one of his neighbours does. During those minutes of absence a few customers stay in the shop awaiting his return. It’s a matter of trust, Bittan says, convinced that people in his shop will not steal anything while he’s gone.

According to Bittan it's not so much the dwindling tradition that's a worry or even the concern that the youth that might leave that is a threat for the community. Of course the youngsters can leave if they want to, says Bittan. “But why would they? Life here is good.”

No, if anything puts pressure on the Jewish community of Djerba, it’s what he calls "the uncertainty of life". “If it stays quiet like it is now, people will stay. If it gets unstable, they will leave. For now it’s good, there is more security then there was before. For now, they’ll stay.” 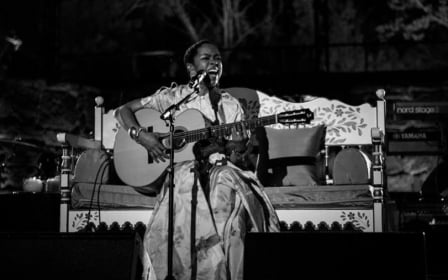