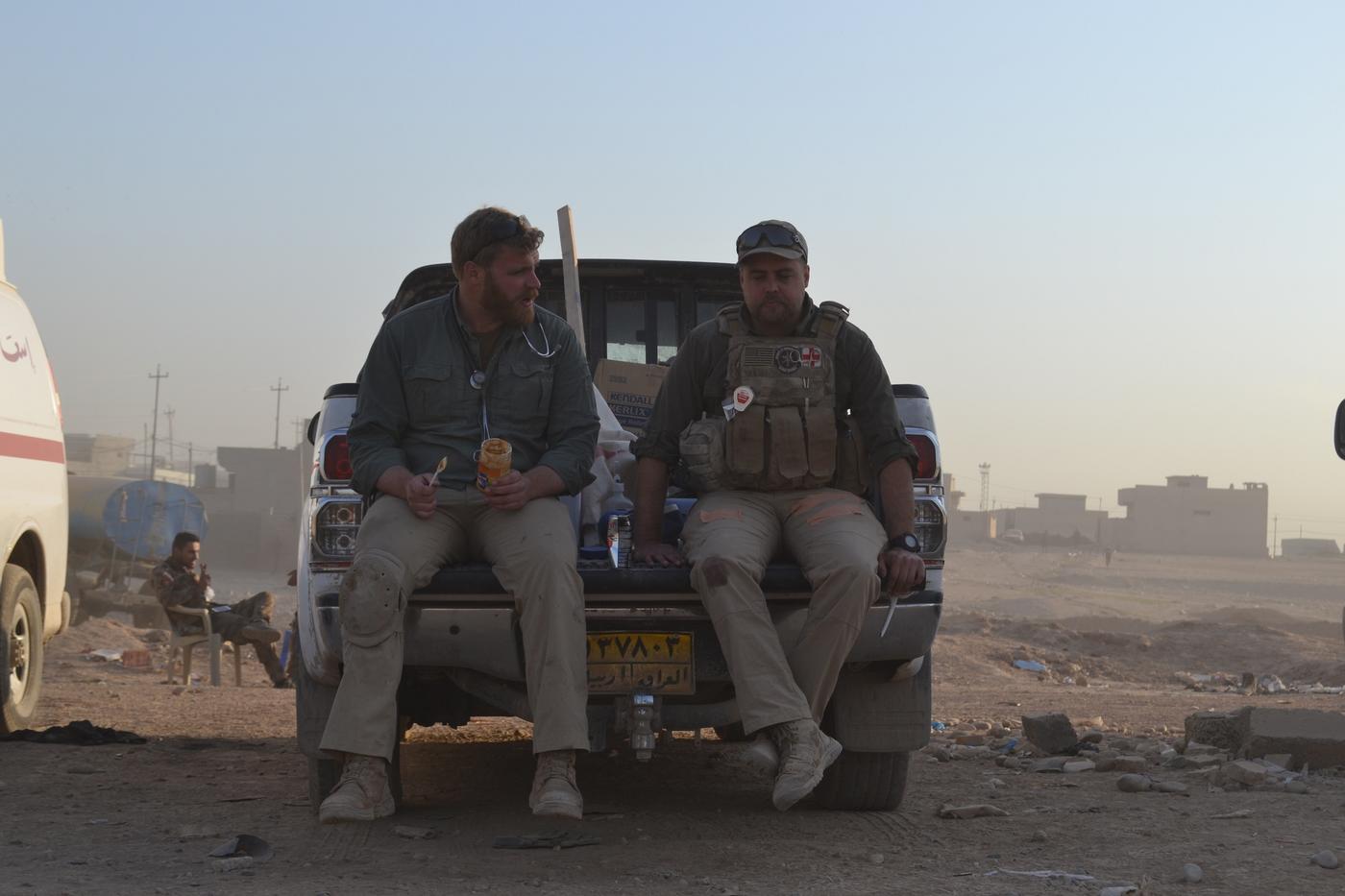 Pete Reed (L), and Derek Coleman (R) both 27, catch their breath during one of the many long waits at a frontline medical clinic in Eastern Mosul (MEE/Gareth Browne)
By
Gareth Browne

MOSUL, Iraq - Grasping her son’s arm in one hand, and a saline drip in the other, Hamdiya Saleh stumbled across the dirt. The 30-year-old Mosulawi had walked for several hours, her black abaya trailing on the ground, to the motley Al-Samah Clinic in the Al-Samah neighbourhood of eastern Mosul.

Just five days ago, her nine-year-old son Thanoor Saleh was caught in the blast of an Islamic State group mortar. Their home, in the now partially liberated neighbourhood of Aden in eastern Mosul, is often the target of reprisal IS mortar attacks on as much as an hourly basis.

While playing in the street outside his home, Thanoor took a piece of shrapnel to the neck. Despite receiving near immediate treatment, the injury is still causing him problems, and this clinic staffed by Iraqi special forces medics with the help of the Academy of Emergency Medicine, a Slovak-US NGO, is the only front line clinic in the east of the city. It is the only help they can reach.

Hamdiya and her young son, seeking follow-up medical treatment, are among the first to arrive at the clinic early that morning. Pete Reed, 27, from Trenton, New Jersey, is a bearded former US marine with two tours of Afghanistan under his belt and a commanding presence, now helping to run the clinic.

After leaving the marines, he spent time working as a ski instructor, but was drawn to Iraq late last year, originally to fight alongside the Kurds, but it quickly became evident that his skills as a combat medic were of far greater value. He instructs Hamdiya to take her son to the hospital. There is still shrapnel in his wound and he requires treatment. The treatment may require surgery, and with those at the clinic only trained in basic trauma medical care, it goes beyond their remit.

The journey should take no more than one hour, but between these eastern outskirts of Mosul and Erbil there lie at least 4 checkpoints, some controlled by the Iraqi army, and beyond that by the Kurdish Peshmerga.

The journey via ambulance should be straightforward, but this is the humanitarian front line in the war against IS, and nothing is as it should be. Hamdiya returns to the clinic later that afternoon, just as the medics are packing up like shopkeepers after a long day of trade. She told of how she and son were arbitrarily stopped at two Peshmerga checkpoints, and the journey took almost five hours. Some of the soldiers insisted that “there was nothing wrong with him”, and he did not need treatment. Then upon arriving at the hospital, Hamdiya was asked: “Why are you here? You’re Arab,” before being turned away.

Arab-Kurdish tensions have ratcheted up in recent weeks, and many Kurds are intensely suspicious of Sunnis fleeing the largely Arab city of Mosul. Following the liberation of Ramadi earlier in the year, ISIS attempted to use abaya-clad women to attack checkpoints, the explosive vests hidden away under their garments. Male fighters have also attempted to flee the embattled city, posing as civilians, making life even more difficult for those citizens genuinely trying to flee.

'We just do what we can'

What happened to Hamdiya was not an isolated incident. First Sergeant Ghali, the moustached spokesman of the elite Counter Terrorism Unit’s medical corps unit in charge of running the clinic, says it is “happening every day,” adding “sometimes we have to send people to Baghdad [400 km away] for treatment.”

The clinic is officially an Iraqi army installation, but the support of the NGO is both welcome and necessary. Iraqi army medics and the NGO staff – particularly Reed and Coleman - work hand in hand treating patients, maintaining the clinic and sourcing supplies. The two came to Iraq late last year with the vague notion of wanting to help in the battle against Islamic State. Instead, it was providing basic trauma medical care and training that they deemed the most effective means of helping. They worked initially with the Kurdish Peshmerga, and only in recent weeks joined up with Iraqi forces, sweet talking generals and hustling their way through military checkpoints as “Special Forces”. They openly admit they have been “blagging it.”

This delay and sometimes denial of surgery and more advanced medical treatment is costing lives, as Reed acknowledges: “We know that a lot of people we patch up here die en route to the hospitals in Erbil, we just do what we can”.

Reed’s colleague Derek Coleman adds: “The medical care after us is the weak link; all we can really do is stabilise people, and give them a bit more time. The suspicion of IS fighters and supporters doesn’t help, nor do this part of Iraq’s long-standing Arab-Kurdish tensions.”

Periods at the clinic consist of long waits - moments of reflection disrupted by a heavy influx of patients. It is during one of these interim periods that a macabre sense humour and deep conversation about what exactly is going on take place. As Reed says, dragging on a cigarette and sipping from a can of home-brand energy drink, “some days we’ll have 60 patients, other days it’s only 25, but that doesn’t make it any easier, because in the interim you just have more time to think about who you had today – the downtime makes it harder.”

Reed’s colleague, Derek Coleman, 27, is a former machinist from San Diego, with only basic civilian medical training, but that hasn’t stopped him from trying to make a difference. Like Reed, he too initially came to Iraq to join the Kurds as a foreign fighter. But, he says, “I realised that was all bull***t, and this was a better use of my time.”

Derek Coleman...initially came to Iraq to join the Kurds as a foreign fighter. But he says, 'I realised that was all bull***t, and this was a better use of my time'

The two are fiercely critical of the overall medical situation. “There is no coordination between the government and all the agencies, they all do their own thing,” says Coleman.

It would be easy to dismiss the two as war junkies, and indeed some have. Coleman, however, seems to be a well-read and intelligent man. He tends to casually drop the likes of John Stuart Mill into conversation and answers tough questions with reason, a far cry from the war junkie some have tried to paint him as being. Coleman recalls the case of a young girl he treated recently. “She didn’t make it,” he avoids eye contact, as his voice begins to break, “but I just remember trying to wash her blood off my hands; that was hard.”

Despite months of exposure to this suffering, he is anything but immune to the emotional effects. Similarly, it is clear that Reed is not just here for the ride. He has the sort of experience - providing critical care in conflict zones - that often makes the difference in tough cases where patients could go either way.

A conversation with Coleman about his favourite tanks is interrupted with the eerie sound of a Golden Division Humvee’s horn. Skidding to a halt, civilians drag two men from the vehicle – brothers, both injured in an Islamic State mortar attack. “Get him on oxygen,” yells Reed, seeing instantly that the first of the men pulled from the vehicle is in a critical state.

Within minutes, the 27-year-old named Ali Khalil is declared dead, and focus switches to his brother Umar Khalil who lays on a stretcher in the building’s courtyard as his chest is bandaged. “How is my brother?” he asks repeatedly; “Don’t worry, he’s going to be fine,” whispers an Iraqi medic in his ear.

Outside the clinic stands the brother’s neighbour, who is exhausted and covered in dust. With Umar stabilised, and Ali dead, they discuss what to do next. According to Islamic custom, after death a body should be buried as quickly as possible. “We can’t just bury him, his family must see the body,” shouts Ubay Abdel Basset, the neighbour who pulled Ali from the rubble. He explains that much of the family has fled Mosul to Erbil. But without identity cards, their car will likely be unable to cross checkpoints. They elect to return to Mosul, and with Ali’s body wrapped in a blanket, they board an Iraqi army Humvee and head for the family’s plot in a graveyard in the Mosul neighbourhood of Qadisiya.

This is but one example of the logistical dilemmas friends and families increasingly find themselves facing as the civilian casualty rate climbs.

As the vehicle accelerates away, towards the sound of distant gunfire, Ali shouts: “Only God can help us. We will go back to Mosul. Maybe tomorrow we will die, but we will go back to Mosul.” And, as suddently as they came, no more than 20 minutes after arriving, the patients are gone, and the clinic returns to a deathly silence, interrupted only by the slopping sound of a young Iraqi private mopping blood.

Despite the great number of deaths, some of the toughest times ahead are for those that the clinic does manage to save. As the medics finish a lunch break, a middle-aged man is brought in, his arms slung over the shoulders of his father and a brother, and he is placed on the stretcher and whimpers a few barely audible words over and over again – “my legs, my legs.”

Sami Abdul-Razaq has been shot in the back by an IS sniper while trying to flee the city despite carrying a white flag. An Iraqi medic frisks his pockets urgently searching for a key, but settles on a pair of scissors sitting on the side. Using the sharp end, he prods the man’s feet searching for some sort of response but nothing. “This is not good,” he whispers to himself.

'Even if the Islamic State don’t kill you, the chronic inefficiency just might'

Psychological and physiological support for those who have survived serious injuries is not readily available in Iraq, and even where there is an NGO or government department in place to support patients, treatment is often delayed or incomplete due to a lack of coordination and bureaucracy. It is the same obstacles that often leave this clinic short on supplies or without an ambulance, and that leaves critically injured civilians stuck at army checkpoints for hours on end because of a lack of paperwork.

As one NGO worker, who declined to be named, said: “Even if the Islamic State don’t kill you, the chronic inefficiency just might.” 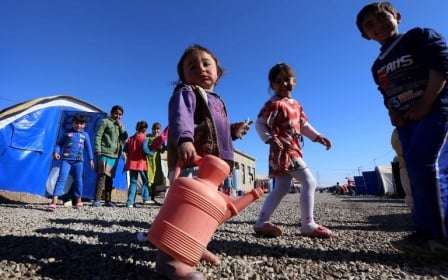