In a short documentary, Maen Hammad shows how Palestinians use skateboarding to resist the Israeli occupation 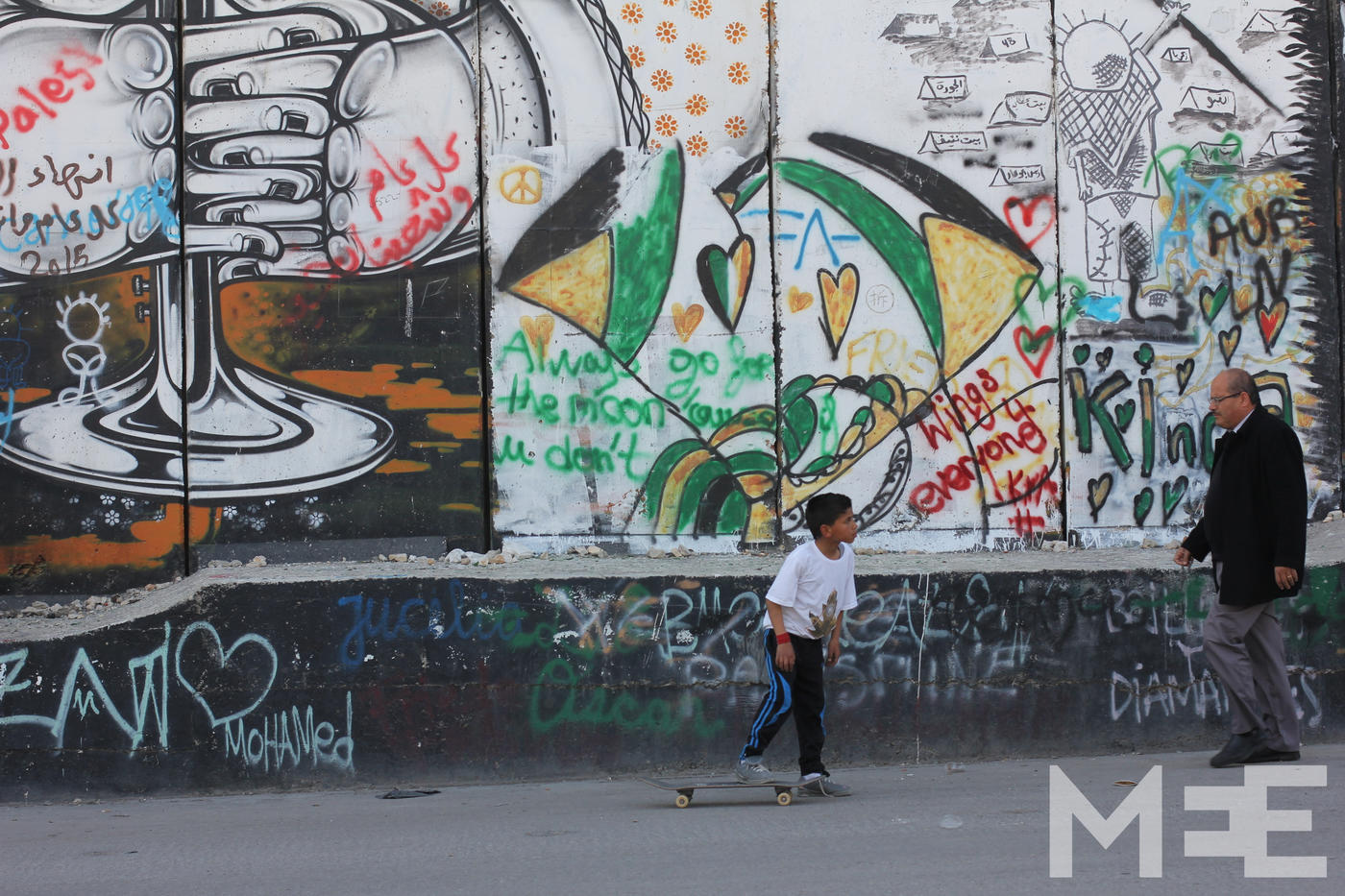 A Palestinian boy skateboards next to the Israeli separation wall in Bethlehem, in the occupied West Bank (MEE/Maen Hammad)
By
Graham Liddell

Maen Hammad became obsessed with skateboarding at the age of 10. He was born in Palestine, but grew up in the suburbs of Detroit, Michigan, far from the harsh realities of daily life under Israeli occupation.

The young Palestinian American never expected that when he returned to the West Bank as an adult, he would encounter fellow Palestinians who shared his love for skateboarding and thrived on the sport just as he did.

For Hammad, 22, skateboarding is more than just a thrilling activity and an irreverent American subculture. Throughout his teenage years, he realised that skateboarding was something that helped him evolve as a person.

“Skaters from around the world can acknowledge that skateboarding is not only a hobby,” Hammad says.

“Skateboarding is a tool, a tool for self-development. By skating you challenge yourself every day, interact with your peers, and create a positive and healthy outlook to set goals, relieve stress and increase self-esteem.”

In the West Bank in particular, Hammad says, Palestinians are using skateboarding in a very unique way.

Hammad first discovered the Palestinian skateboarding scene in 2014, when he came to the West Bank to study Arabic at Birzeit University. He met a few Palestinian students who skateboarded, and was intrigued. They told him about an organisation called SkatePal, which promoted the sport in the West Bank and built a ramp at the Islamic Centre in Ramallah. Another organisation, Skate-aid, had recently built a concrete skate park at the SOS Children’s Village for at-risk youth in Bethlehem, he learned.

Hammad also met a group of skaters making up a counter-culture in the northern city of Qalqiliya, known for being the most conservative city in the West Bank and for being almost completely surrounded by the Israeli separation wall.

Fascinated by the Palestinian skateboarders he met, Hammad returned to the West Bank in 2015 on a mission to document the skate scene in Palestine. The result is his striking 22-minute visual essay “Kickflips Over Occupation,” a documentary film Hammad shot over the course of several months spent in Palestine earlier this year. In the film, Hammad asserts that Palestinians are using skateboarding as a method to non-violently resist the Israeli occupation.

Hammad came back to the US in early August. He moved to Washington, DC, where he will be studying international relations in a master's programme at George Washington University. Middle East Eye caught up with him via Skype.

MEE: How has skateboarding been a tool for self-development for you personally and for Palestinians in the West Bank?

Maen Hammad: For me, when I was growing up, after school, or after however stressful of a day I had, I would always just go out to my garage and pick up my skateboard and start skating. It was like a no-plan kind of sport where you could just forget anything that happened in the day and focus on relieving stress or learning a new trick. I also used it as a reward for myself. Like if I finished my homework, or if I did something that deserved admiration in my eyes, I would just go out and start skating. I spent a lot of time at the skate park in my town, and it was a way that I met friends, and I used it as a transportation mechanism. Skating was my easy pick-me-up.

With Palestinians in the West Bank I see skateboarding in that essence because they go through a lot more than I did when I grew up, but even there they can use the skateboard as that same tool, you know? They see these walls, they see these soldiers, their parents aren’t in good economic situations, all this stress that builds up, they can just forget it, pick up the skateboard and just cruise along.

MEE: Do you consider skateboarding to be an inherently rebellious sport?

MH: As a kid, I linked skateboarding to rebelliousness just to give it that sort of vibe – that resistance feel. I feel like every skater can admit that at some point they felt like a rebel while they were skating, like resisting whatever it might be, you know? For me, I would put on my headphones and listen to Iron Maiden tracks and act like I was a hardcore badass living in the 1980s San Fransisco skate scene, even though I was in a white suburban neighbourhood in the 2000s. For me, I definitely felt the rebel feeling that all skaters kind of get. And people look at you as if you’re that skater rebel.

For Palestinians, it’s that same kind of feeling. You can tell with Abdullah, and the other kids from Qalqiliya featured in the film - they’re living in the most conservative city in the West Bank, surrounded by a wall, but these kids will still wear their skinny jeans, pick up their skateboards, cruise around during Ramadan and not give a shit about anybody. So in that sense there’s a rebellious feeling – but for Palestinians I think it can be linked to the non-violent resistance against the occupation itself.

In my eyes, an Israeli’s ideal dream for Palestinian kids would be getting into stone-throwing protests, which are not productive, basically. But they’re saying, no, we’re not gonna do that, we’re just gonna skateboard and you’re not gonna win and make us get involved in things that are harmful for our lives. We’re just gonna skate and have fun and be with our friends, and meet new people and try to progress in a sport that you’re not allowing in our country. [Palestinian skaters often complain of difficulties obtaining skate supplies due to Israeli restrictions.]

One of the kids in the film, Aram, got shot two times when he was throwing stones last summer during a protest in Qalandiya [near Ramallah]. This was three months into him skateboarding, and he was like, yeah, I’m done with that kind of life. I’m done with throwing rocks. I get much more enjoyment out of skateboarding and I know that my free time can be used much better on a skateboard than going to demonstrations and going to Ofer prison. These things are physically harmful for the kids and I don’t think that it is helping them progress – although it is resistance in a way, but I think for them they are using skating as an alternate kind of resistance.

I always knew that these thoughts were in my head when I was in Palestine last summer and speaking to these kids, but throughout my past five or six months there it became definite. With the kids I was speaking to and the experience I had and the way they were acting – I’m 100-percent positive that this is true, it’s not just a bluff: I definitely think Palestinian kids use skateboarding as a nonviolent mechanism to resist occupation.

MEE: Is skateboarding in the West Bank, specifically in Qalqiliya, also a resistance against conservative society?

MH: Yeah, I think that Qalqiliya is especially unique just because of how the city is and how the people act in that city, just because of how religious it is. I was there during [the fasting month of] Ramadan and it was like – even thinking about getting a bottle of water during the day, before the evening prayer, it was like a stressful thought – you know? Kids during Ramadan, they went and they bought five-shekel [$1.30] packs of cigarettes and they bought a bunch of biscuits and a bunch of water bottles and they stashed it by the ramp just so they could eat, drink and smoke during fasting hours – which is funny to me. In a way, like, buying five-shekel cigarettes and a bottle of water before the evening prayer in Qalqiliya – that’s very rebellious.

I know Abdullah goes by himself and skates the ramp for a couple hours a day. But when he’s doing it with his friends I know it means the world to him. For these kids, they’re hanging out with their own group, in their own kind of culture, in the most conservative city in the West Bank and they’re just being badass.

MEE: Did you encounter many young girls in the West Bank who were skating or is it like the US where skating is seen as more of a “guy sport”?

MH: I think it’s seen in the same way, but in SOS Children’s Village in Bethlehem there were just as many girls skating as guys, just because it was run by the orphanage that housed at-risk youth, and the kids lived in the village. They designated slots for the girls to skate and slots for the guys to skate. Half the time the girls would be even more courageous than the guys - which is pretty impressive, to be honest. I think that the girls who practiced were just as eager to skate as the guys, basically.

MEE: Have you heard of any skateboarding in Gaza?

MH: I have heard about parkour in Gaza, and I think I saw a video about rollerblading or something, but the organisations that I worked with – they definitely don’t have anything in Gaza. SkatePal hasn’t done anything there and neither does Skate-aid, but that’s just because they aren’t really allowed to go there, I don’t think. But I don’t know – I haven’t heard of anything, but I was surprised when I found kids with skateboards in the West Bank, so, for all I know there might be a kid or two skating there.

I think people in Gaza would need it the most – definitely it would be an outlet for them to feel as free as they could. I think they might need it a lot more than some of the kids in the West Bank.

This interview has been edited for clarity.