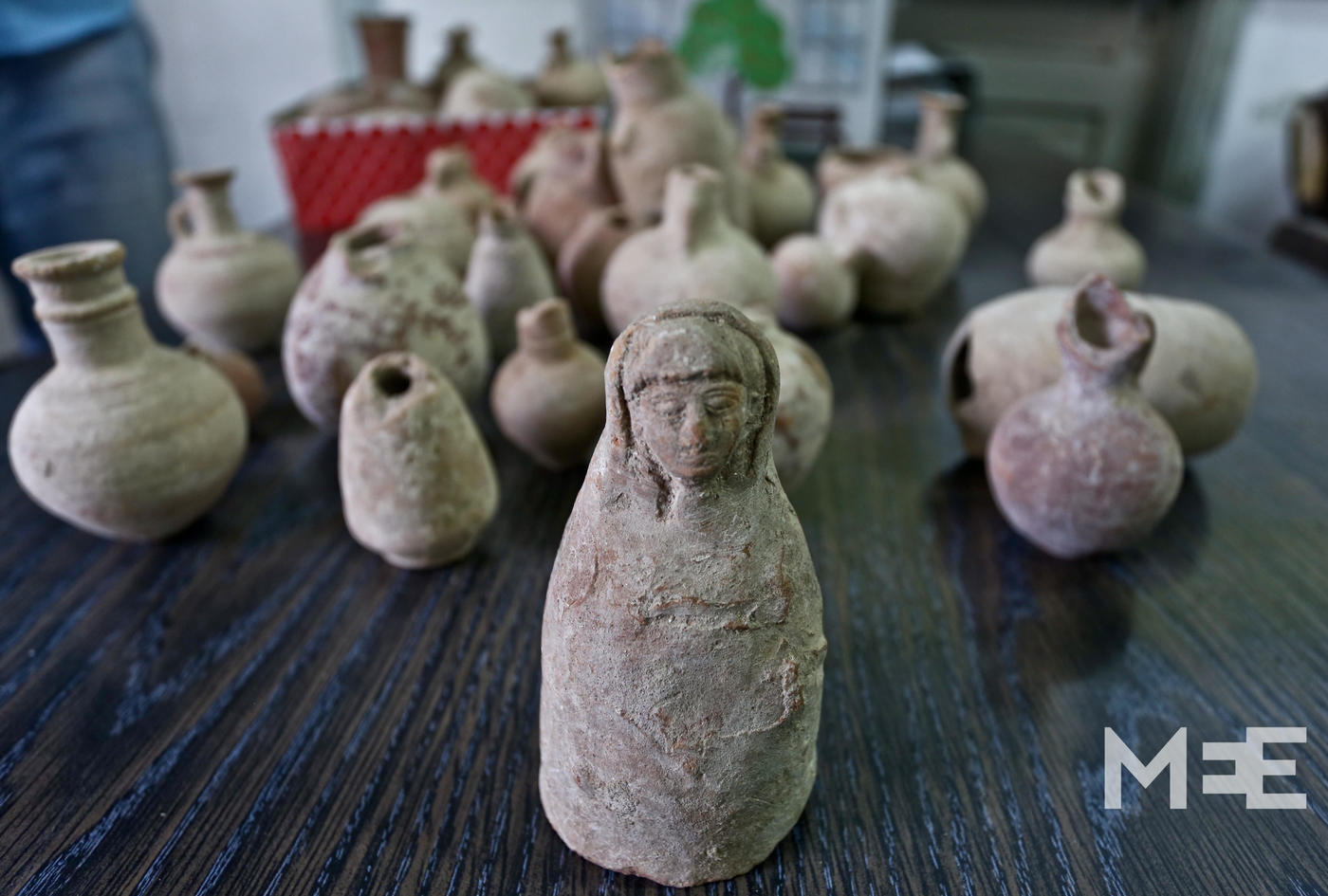 Pottery dates back to the Roman and Canaanite era including statues of worship, now held by the Ministry of Tourism (MEE/Mohammed Asad)
By
Mohammed Omer

Gaza City - In Khan Yunis, children can be seen playing in the ruins of an old Crusader castle, Barquq, named after the Mamluk sultan who died in 1399. It’s one of many archaeological sites that the Ministry of Tourism and Antiquities in Gaza is keen to protect, explore and maintain but lack the resources to do so.

“We have found very valuable remnants, but we need a lot of experts, and effort, to help us with the digging and unearthing from the ground” says Dr Jamal Abu-Reda, deputy head of the Ministry of Tourism.

The ministry is part of the de facto government on which Israel still imposes its punishment, through economic blockade. Egypt, under President Abdel Fattah al-Sisi, then destroyed more tunnels in Rafah, causing the government to lose more sources of revenue enabling it to operate efficiently and pay its 42,000 salaries.

“We constantly get calls from people saying they have found ancient artifacts, and we must officially collect and record them, but simply don’t always have fuel to drive to Rafah, investigate the sites, record the relics and do the job,” says Abu-Reda.

The ministry now relies on dedicated local workers who dig, clean and sort such relics and offer estimated dates of origin. However, none of the workers are expertly qualified enough, to do the work precisely.

'No one cares about our heritage'

In 2001, Palestinian archaeologists unearthed an undamaged fifth-century Byzantine-style mosaic in an area known as Tal Umm Amer, a few kilometers away from Gaza City.

Archaeologists say the site is that of the oldest monastery in the Middle East, which should be officially protected by the World Heritage Foundation. Travelling around that location today, one wonders how protected it will remain - and the local guard seems to have gone home, early.

A passer-by says, “No one cares about heritage and history - our leaders fight over who will maintain power while we lose many wonderful things belonging to our ancient history.”

Byzantine historians say that St Hilario (291-371 AD) was born in Gaza, and travelled to Egypt where he converted to Christianity. When his returned, he founded the Tal Umm Amer monastery on a hill overlooking the Mediterranean.

During St Hilario’s life, more than 400 other monks came to join him. But being Anchorite and desiring to live in solitude, he left for Cyprus to live alone, where he later died.

In one of the locations, there are the remains of an unusually large Byzantine basilica, built in a classic cross pattern, with steps going down into what is thought to be a baptism pool. This area still needs complete examination and excavation by experts.

The ministry is very proud to declare this site as a place of great historical significance to all ancient religions and history, highlighting early Christian history in the region.

Walking through the quiet but neglected area, one can see a Byzantine-style mosaic including a large Greek prayer inscription, with circular motifs, apparently asking God to protect all holy men who do his work on earth. There is much more history under this ground, but continuing political tensions and Israel’s economic blockade remain obstacles to honouring Palestine’s ancient history and showing its heritage treasures to the world.

In ancient times, says Abu-Reda, Gaza was a vital crossroads and busy trade-route between Egypt, Palestine, Mesopotamia and Europe. The main road linking them, Via Maris, ran close to the site of the monastery with imposing views over Gaza City. He says there are indications that travellers between Palestine and Egypt stopped at Tal Umm Amer for a rest.

To preserve these historical sites, the ministry asked for investment, but, since Hamas came to power in the strip, has never been granted this vital funding, except by a few smaller groups and United Nations assistance in the renovation of the 500-year-old Al-Basha Castle.

However, Professor Naim Baroud, head of the history department at the Islamic University, warned that lack of patronage for archaeological sites may result in their disappearance in the long term.

“Without international support, we may lose all the valuable archaeological sites,” he says.

Abu-Reda remains hopeful of wider patronage but adds that, until then, his ministry is using locally available materials to renovate sites destroyed by Israel’s last military attacks on Gaza.

“Our workers are trying to renovate remnants, using items that have nothing to do with building, as in the case of the Byzantine church,” he adds.

Workers say they are only able to overcome Israeli siege restrictions by mixing white cement with butter and lime, in order to create some natural material to renovate valuable relics.

Archaeological sites and artifacts have passed through, and survived, several stages in Gaza - with some having been taken by individuals interested in art collection or kept as personal possessions.

However, this does not seem to be of concern to the tourist minister who says that most local people never try to traffic such items abroad, but prefer to keep items safe, locally, for their history.

Gaza beach is sometimes covered with such items - a fisherman found a hand-made mill, which he was able to carry to Al-Basha Castle, which is now being reconstructed as a national museum.

“But there are some days where we have no funds to transport these historical relics,” says Abu-Reda, who is very keen to defend, record and protect the ancient history of Palestine stretching over thousands of years for the present and next generations.

Last year, a Gaza fisherman “netted” a life-size 2,000-year-old bronze statue of the Greek god Apollo and photographed it resting on a Smurf blanket before the statue was seized by Gaza police and mysteriously disappeared again, with suspicions of the historically priceless artifact being sold on e-bay, for a mere $500,000.

Marwan Shawan, in Khan Younies, has his own tiny museum - not open to the public - where he protects items from many ancient eras, Christian and Islamic, including monastic relics, early guns, old stone, daggers, spears, swords and even an old smoothing iron from when they were first used, in Gaza, for laundry. Among his rarest pieces is even a piece of railway track which has the signature of the thirty-fourth Sultan of the Ottoman Empire, Sultan Abdulhamid, on it.

The ministry says that such people did a wonderful job of protecting such ancient and national relics, long before the PA was established and before anyone thought of keeping such artifacts in museums. The ministry has recorded all such items, claims Dr Abu-Reda.

Shawan says he will keep about 400 collected items, even if he is not able to accurately date them himself.

“This is our history, and I will ensure they are protected no matter what - even when I get no funding to show them in public.”

A struggle to own the past

Abu-Reda believes the persistent aggression from Israel is a battle to claim ownership of history. He says Israel is still digging to prove it has historical ownership in Palestine, over Palestinians, whether Christian or Muslim.

“This includes the digging underneath Al-Aqsa mosque.

“Palestinians can and will re-write their history again, to refute Israeli propaganda that Palestine was, or is, a land without people,” adds Abu-Reda.

Meanwhile, the fact remains that Tal Umm Amer -  which consists of three or four historical layers, and has been dated to periods between the third and seventh centuries - lacks financial patronage and heritage protection.

Shawan, who collects and protects items from monasteries, is Muslim, but sees nothing unusual about his desire to protect and promote a Christian shrine, in an area inhabited by only a few thousand Christians.

He only hopes that one day thousands more people will come from around the world to visit and appreciate his hard work in uncovering and protecting historical treasures.

“Our common history and civilisation is here and we want to share it with the world.” 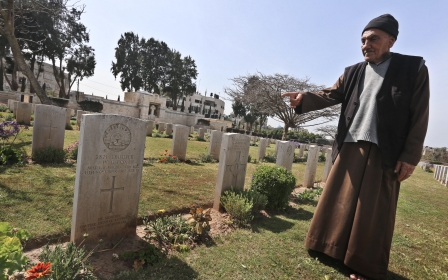 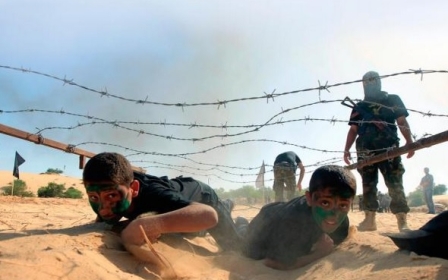 Reviews
Book review: a 4,000-year old history of conquest and occupation in Gaza