Ranging in ages from 7 to 14 years old, the young 'talents' have attracted large audiences across the region with its team of celebrity judges MBC's first season of The Voice Kids will air its live finale this week, concluding a successful first season for the show.

The programme was quick to attract large audiences in the Arab world, due in part to celebrity judges Nancy Ajram, Tamer Hosny and Kadim "The Caesar" Sahir. While the star power brought by the trio offered a hook for audiences, the young contestants have gained a mass following of their own. Ranging in ages from seven to 14, the "talents" have warmed hearts and lit television screens across the Middle East.

The format is familiar for shows of its type: hopefuls from across the Middle East supply a pool of talent for scouts to consider. After being selected in preliminary auditions, the prospective stars are brought to the studio for the blind "Voice Only" round, where the judges sit with their backs turned and listen to the child's 90-second pitch.

Hoping to capture attention, some students made a show of their versatility by singing in English, while others took on Arabic love ballads. Nine-year old Syrian contestant Ghina Bou Hemdan delivered a moving political message with her rendition of "Give Us Childhood," which she dedicated to the youth in her war-torn homeland.

Based on these blind auditions, judges have the choice of offering to the young contender a spot on their team - a process that sometimes leads to a friendly fight when multiple judges vie for the same prodigy. For those failing to make the cut, there were tearful farewells and invitations to try again next year.

From there, teams progressed under the guidance of their coaches. Some took on classic Arab songs by legends like Oum Kalthoum, while others adapted American songs or covered familiar hits like Frozen's "Let it Go."

The judges were also responsible for eliminating contestants each week - a duty they performed with great chagrin.

Despite the necessary element of competition, the atmosphere of the show is decidedly uplifting - the judges rarely offer anything but praise to the young singers, and any criticism is swaddled in encouragement. Judges take turns complimenting the members of their colleagues' teams, and the camera frequently veers to the audience to glimpse grinning, cheering family members.

The programme airs for two hours on Saturday nights, with re-runs on Friday. For many in the Middle East, the light-hearted show is a welcome relief from the grim news cycle, but even this musical family programming includes a few nods to regional political turmoil. Ayman Ameen has spoken offstage about the Palestinian cause, while Sahir commented about his dreams of freedom for his native Iraq.

All of the judges have expressed the hope that their young mentees will grow up into a more peaceful world, and several children describe their aspirations to "spread a message of love" with their music. Political realities are reflected in subtler ways, too, including the diversity of the contestants, whose various dialects - Egyptian, Libyan, Lebanese, Emirati, among others - hint at the cultural complexity of the region represented.

Abroad, Arabic-speaking audiences in Europe and the United States have kept apace by watching the full-length episodes posted on MBC. Many clips of the show have well surpassed 20 million hits each, and online forums are filled with the chatter of fans debating the impending outcome.

Many of the tweets have focused on Ajram, whose irrepressible star power at times dominates the show. Still, what comes across in the episodes of The Voice Kids is a tone of affability and excitement largely directed at seeing the youngsters succeed. Despite the inevitable moments of melodrama, there appears to be a genuine warmth among the cast.

In the most recent episode, each judge was forced to eliminate three members of their respective teams, leaving six finalists to proceed to the final round next week. It was an emotional end for many of the young contenders and judges alike - when young Abdulraheem Al-Halabi dissolved into tears after being eliminated, Sahir moved quickly onstage to offer comfort. Placing his arm around the boy, he encouraged him to be proud of his accomplishments. "You've already succeeded... the entire audience loves you and is behind you." At these words, the studio burst into applause.

The final round is the first time audiences will directly register this support. This week, audiences will weigh in by voting via phone and text. The show will crown its first winner over live broadcast on 5 March. 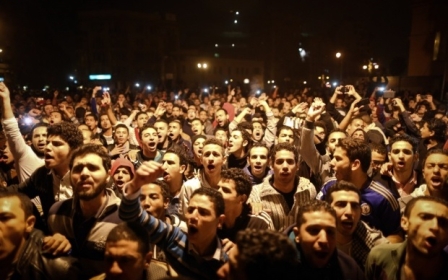