Rooftop dreams of Gazan band Typo: 'We play rock for a better tomorrow'

Despite the cancellation of their West Bank tour by Israeli authorities, Typo launches its first album while looking forward to the future 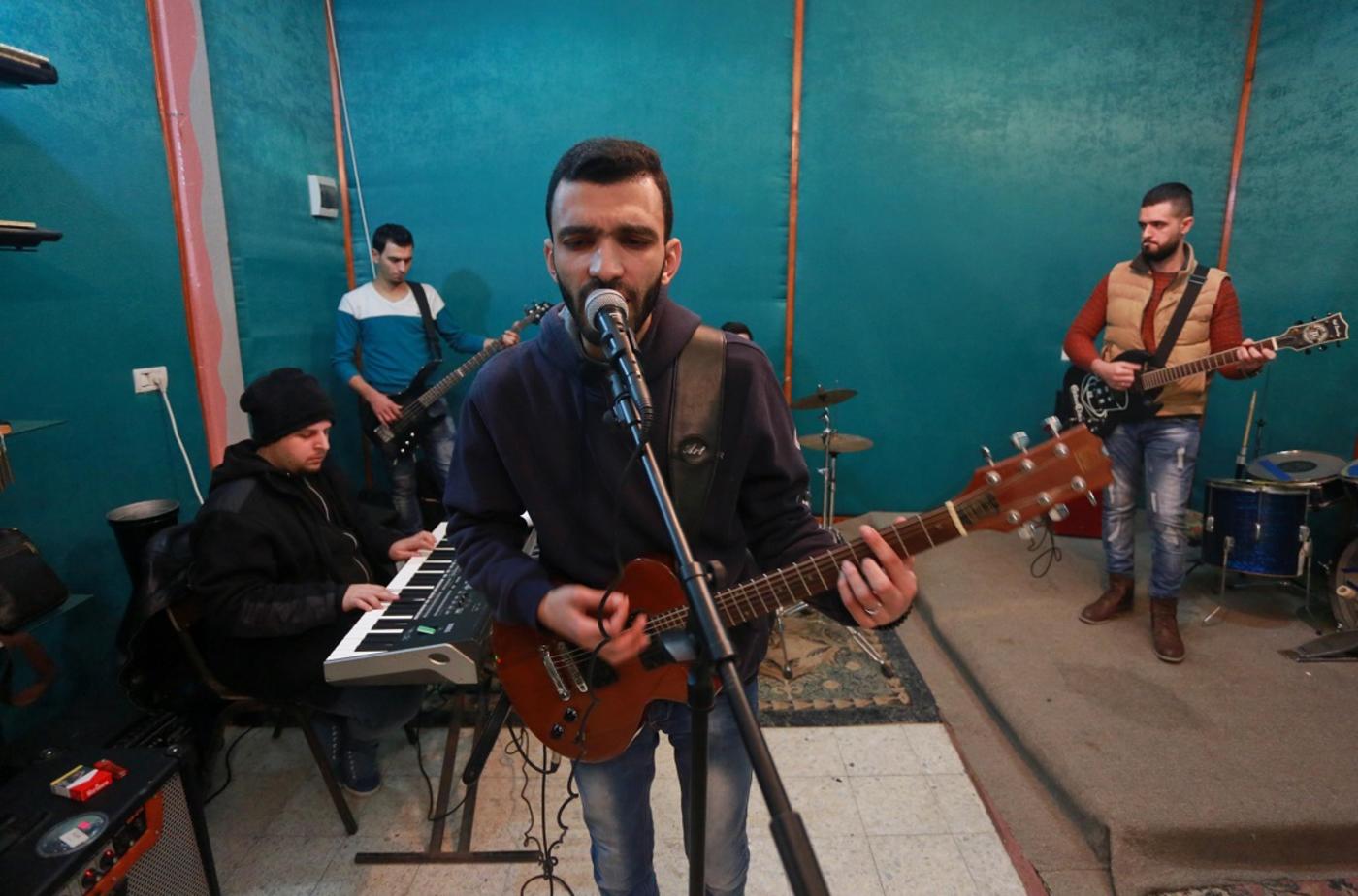 GAZA STRIP - On a summer's day in 2012, amid scorching temperatures and constant power cuts, a rooftop was the only place where two university students could enjoy some music, sleep and pass time smoking some shisha. Mohammed Zohud, 25, and Alaa al-Hamalawi, 26, were playing guitar and singing on the rooftop of Hamalawi’s house in Gaza.

Suddenly, a neighbour called Om Mohammed opened her window and started shouting at them, demanding that they be quiet. The two students felt suffocated as they were about to lose the only space they had to express themselves freely and crank out their tunes.

Hamalawi explained that houses in Gaza are too close to each other, stripping people of their privacy and allowing for others to “stick their noses" into other people’s business. Using this event as their inspiration, the two friends wrote lyrics and composed their first song, which was named in honour of Om Mohammed, reflecting on the lack of space and privacy in the besieged strip.

'We wanted, from day one, to have our own songs, because our main goal was to reflect the experiences that we go through in Gaza'

Feeling like they had found their niche, the two young musicians decided to create their own band and sing original songs. And in their creative journey they started meeting up with local writers and poets.

"Although most bands prefer to start by singing hit songs for already existing bands, we wanted, from day one, to have our own songs, because our main goal was to reflect the experiences that we go through in Gaza," Hamalawi said.

"We were two guitarists and a drummer. Our bedrooms were full of Guns N' Roses posters. It was obvious we were establishing a rock band and we called it Typo," Hamalawi explained. "Typos are arbitrary, just like everything in Gaza. We didn't plan to have our band, it all happened suddenly, just like a typo."
They recorded their first video for their song Dream of Dawn, following the Israel offensive on Gaza in 2014.
"The 51-day war had just ended, and we wanted to send a message full of hope. We recorded the song in a studio in Gaza, as our friend, who works as a director, helped us in filming it," Zohud said. "The song's success gave us the will to think of our next step, the album."

The first challenge Typo faced was the style of music they were playing. Palestinians, and Arabs in general, do not easily accept foreign concepts, especially relating to culture and traditions.

"Rock music is unfamiliar to Gazans. This is why we were very wary to play in concerts or to release any of our songs," Shanghan, 22, said. "Clapping along with the music is very important for Arab audiences, but it's very hard for them to feel the western beats and rhythms. And here is exactly where I did my twist."

'Clapping along with the music is very important for Arab audiences, but it's very hard for them to feel the western beats and rhythms'

Shanghan mixes rock music with oriental beats in order to make the songs more familiar to the ordinary Arab listener. The lyrics of the songs also reflect the daily lives of the people in Gaza.

Due to the Israeli siege since 2007 when Hamas came to power, the band has faced many challenges, one of them being that many commodities - including musical instruments - are expensive and very hard to find. The frequent power outages also burden them, making the fine-tuning of their talents a tedious process.

“When we tried to buy instruments that normally cost $500, we paid $1500. And even when the instruments had arrived, [it was] after six months of waiting, because of the siege on Gaza and the closed borders, [and] we didn't have electricity to practise,” Shanghan said.

In 2014, after two years of practising and taking part in a few small events, the band became well-known and established connections with official institutions, especially the French cultural centre in Gaza. They prepared for their first public concert that was to be held at the institute on 18 March 2014.

"The French institute provided us with a place to practise and some musical equipment that we needed," Zohud, the band's lead singer and lead guitarist, said.

Unfortunately, after several Israeli strikes that hit Gaza, the concert was cancelled for the audience's safety, which left the band disappointed.

“We spent a lot of time preparing for it, we looked forward to our next participation in the music festival in June, which was also organised by the French institute. But the second concert was cancelled for the same reason," Zohud said.

Later, in July 2014, Israel launched its attack on Gaza, and the residents' lives were put on hold for 51 days.

Moreover, the institute was attacked twice, in October and December of 2014. The militant group Jund Ansar Allah - which considers Hamas to be too moderate - claimed responsibility for the attacks.

Committed to continuing their rehearsals, they spent $200 a month to rent a space and provide fuel for a generator they depended on during power cuts. They used the income they received from their other permanent jobs to fund their band. Zohud, who is married and whose wife is expecting their first child, works as a composer in a music studio in Gaza. He has a BA in physiotherapy, but said: "I follow my passion and dreams which are all about music."

Meanwhile, Shanghan plays drums in wedding ceremonies and local parties, and Hamalawi works as an administrative assistant in the faculty of arts at a university.

The AM Qattan Foundation, a Palestinian foundation that runs cultural programmes which support Palestinian artists, funded the production of the group's album, which was recorded in October 2015, and produced their CDs.

Before that, the band used to compose their songs and memorise them, as they could not afford the costs of a recording studio.

'Our rosy dream came to its end when Israeli authorities didn't permit us to leave Gaza, last June. It was a moment full of frustration and disappointment, but we overcame it'

“I used to sing our songs every night to make sure I could still remember them," Zohud said, adding that the support of the Qattan Foundation came as "a life raft" for the band, especially after the concerts were cancelled.

Five months later, the eight-song album was ready to be released. Typo was invited by the AM Qattan Foundation and the French institute to organise a tour of the five cities in the West Bank for the album release, but the Israeli authorities did not permit them to leave Gaza, according to the group. Israel has routinely refused to give permits to Gazans wanting to travel to the West Bank, most often without explanation.

In August 2016, the Israeli authorities prevented a children's choir from leaving Gaza to perform in the Palestine Choral Festival in the West Bank.

During this time, two new players had joined the band: Samir al-Borno, 26, a keyboardist, and Mohammed al Balawi, 24, a bassist.
"Our rosy dream came to its end when Israeli authorities didn't permit us to leave Gaza last June. It was a moment full of frustration and disappointment, but we overcame it," Zohud said.

Since June, Typo has performed five concerts in Gaza where they played songs from their album, in addition to some traditional Palestinian songs.

The concerts were "successful and fruitful", Zohud said.

"We are planning for other concerts in Gaza and we will try again to go to the West Bank,” he said.

"Five years ago, we were two young musicians playing guitar on the rooftop of my house. Nobody knew us. Now, we are five musicians, we have an album and people are starting to recognise us,“ Hamalawi said. “We will hold on to our friendship and continue to follow our dreams.”