Blackouts and bedlam: Gazans left in the dark about their future 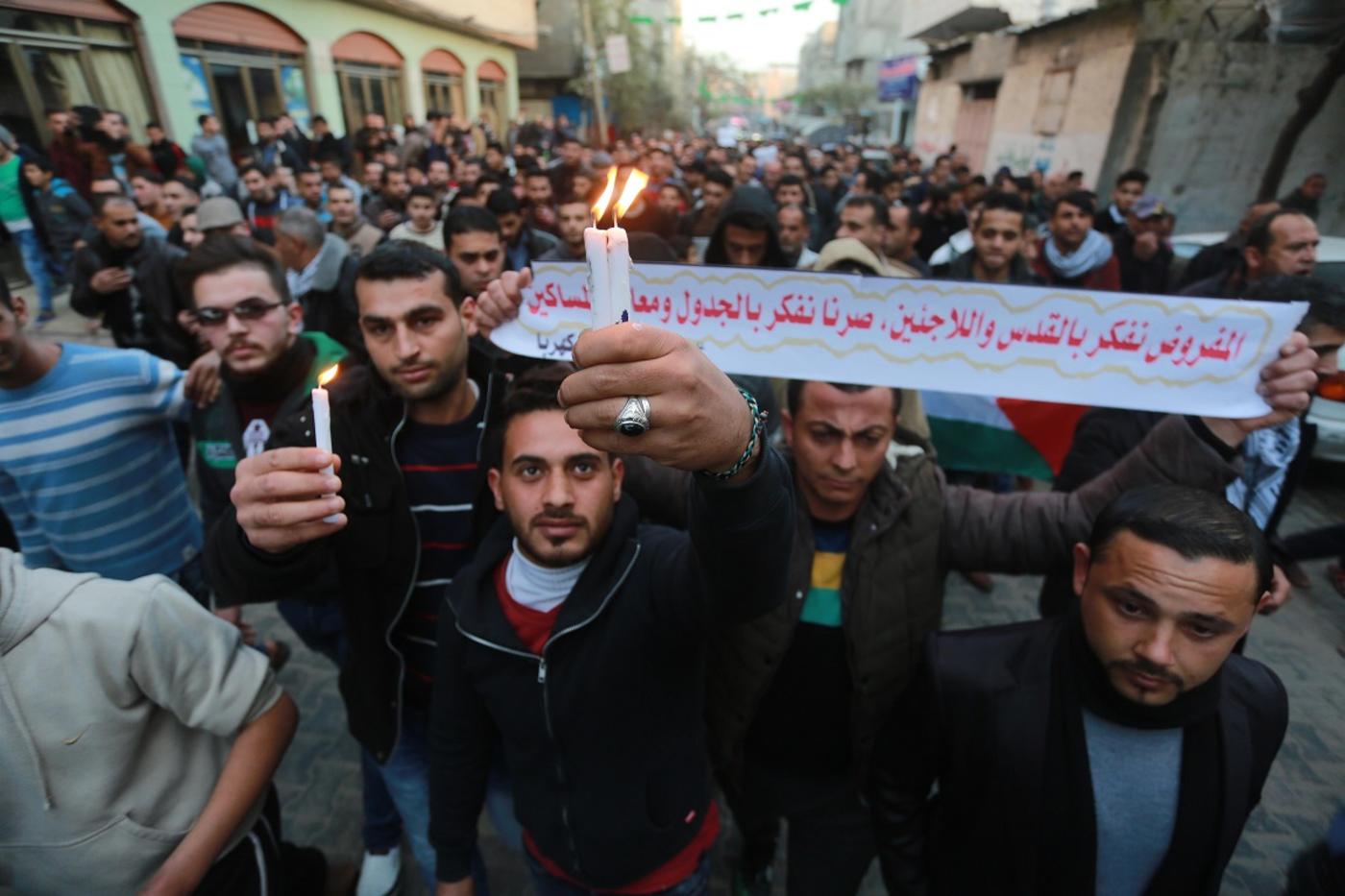 Thousands of people demonstrate in north Gaza, demanding an end to the power crisis on 13 January 2017 (MEE/Mohammed Asad)
By
Mousa Tawfiq

GAZA STRIP - At the tender age of 10, the only life Mohammed Yasin has known has been one of living under siege and power cuts. Born in Gaza in 2006 when Hamas won the Palestinian legislative election, triggering the 2006 sanctions against the Palestinian National Authority by Israel, the young boy has become accustomed to economic hardship and darkness.

"I don't remember a day without power cuts," he told MEE, as his mother lit a candle for him and his sister.

'I don't remember a day without power cuts'

Mohammed was born after the beginning of the electricity crisis in 2006, when an Israeli air strike by an F16 fighter jet hit the sole power plant operating in the Gaza Strip. Since then, the plant has been working at minimal capacity and only when the Strip can purchase electricity from Egypt and Israel.

“I'm getting better at lighting the candles, and sticking them on plates with my mother's help,” Mohammed said, adding that he does very well in school, despite the power cuts.

"Two aliens were surprised while watching earth. Do you know why? Because they saw Gaza's lights turn on and off repeatedly,” she said, as they both laughed.

Gaza’s blackouts reached their peak late last month, as Gazans usual supply of power plunged from eight hours to around three or four hours a day.

'Our life is on hold'

The power cuts have drastic consequences for Gaza's residents. Ahmed Abu Salama lost the freedom to move around his own home because he could no longer charge his electric wheelchair.

"When my wife isn't at home and the electricity goes off, I stay in bed for hours because I can't reach the lights and when I try to, I fall on the ground,” Abu Salama said.

Abu Salama and his friends were hit by an Israeli air strike while they were walking home from school in Jabalia refugee camp in February 2008. Abu Salama, who was 16 years old at the time, was the only survivor, but he sustained severe skull fractures and was partially paralysed in his right hand and leg.

When he could not get the treatment he needed in the impoverished Strip, his health deteriorated and now he cannot walk at all.

Last month, a local charity provided Abu Salama with an electric wheelchair, which was exhilarating for him.

"When I drove my new wheelchair for the first time, I felt that I was alive," he said with a smile. "I can go wherever I want at any time. I'm free again."

Yet with the constant power cuts, Abu Salama said that he felt like his newfound freedom was being stripped away from him. In order to work for two hours, the wheelchair needs to be charged for six hours.

"I prefer to stay at home rather than taking the risk of running out of battery on the street. It happened once and I was very embarrassed to have to ask people for help. Moreover, it will cost me more than $200 to buy extra batteries, and I can't afford them,” he said.

Small businesses in Gaza, already struggling with the siege, have also been hit hard by the power cuts.

Yousef al-Jaro, 52, a carpenter in al-Daraj neighbourhood in the east of Gaza City, said he now has to close his shop most of the day, as all his work requires electrical machines.

The hard-working carpenter proudly said that he used to open his shop at 7:30am and never closed before 7:30pm, but now with the power cuts, he can barely work.

Mohammed al-Jaro, 24, Yousef's son, has been working with his father for seven years and has never seen his father so depressed and frustrated.

"I have seven sisters and a brother. My father's responsibilities are growing and we try our best to help him overcome the situation,” he said.

After the sun sets, a blanket of darkness covers Gaza City, with no lights on the streets glowing anywhere. Desperate to stay warm, people can be seen gathering around small makeshift fires.

Earlier this week, Qatar donated $12 million (£9.9 million) to buy fuel for Gaza’s power plant, easing the crisis and providing electricity for around six hours a day. Though it is a welcome respite to the crisis, it is only expected to provide electricity to the enclave for three months.

Gaza's energy authority said the Qatari-funded fuel would power a third generator at the power plant and help provide electricity in eight-hour cycles for three months.

Residents in Gaza are expecting the power cuts to increase again after the fuel finishes, as many say that this is just a temporary solution to quell the anger of two million people in Gaza who are suffering from the power outages.

Last week, protests against the power cuts turned violent when security forces fired shots in the air and reportedly attacked journalists. Thousands of people had marched to the headquarters of a local electricity company run by Hamas, which has controlled the Gaza Strip since 2007.

Gaza has a demand for 450-500 Megawatts (MW) of power a day, but it is receiving barely a third of that. About 30 MW is produced by its one ageing power plant, while 30 MW is imported from Egypt, and 120 MW is supplied from Israel.

The Palestinian Authority, which pays for power supplied by Israel and Egypt, normally transfers fuel to Gaza and exempts it from most taxes. But because of its own financial constraints, it is no longer offsetting all the taxes, angering Hamas.

The high demand for power, as temperatures drop to four degrees during winter, pushed more people to use electric heaters and radiators in an effort to stay warm. This also played a part in the power shortage.

Hamas spokesman Fawzi Barhoum has said that Hamas is open to solutions, and accused the Palestinian Authority of using the crisis as a means to "damage Hamas's image and sanction Gaza's people".

For years, people in Gaza have been been trying to find ways to cope with the continuous power cuts, such as using small generators, but most people cannot afford to run diesel generators for 20 hours a day.

Sufian Ahmed owns a big generator in the west of Gaza City and he connects it to many houses in the area. In order to get each family connected to the generator, they must pay $50 in advance, which many families cannot afford.

"Some families pay $20 a month, while others pay $150. Some people use the generator electricity just to watch TV and to turn on the lights, while others use it for all their electrical devices."

Ahmed and others like him know that their service is expensive, but they justify it with the high price of fuel.

Others use solar cells for their power needs, as it is cleaner than generators, but much more expensive.

"It costs $2,600 to have solar cells installed in your house, and in addition, every year you'll need to buy new batteries, costing $200,” said Jamad al-Banna, an electronics engineer.

These are all quite expensive and temporary solutions for Gazans, as they hope for a permanent resolution to the constant power cuts and a brighter tomorrow. 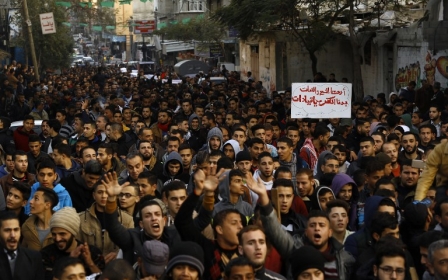