Saved by chance: The other Dawabsha family

In the West Bank village of Duma, a second house was firebombed - luckily they weren’t home that night. Now they all live in terror Mohatseb Dawabsha is certain he and his brothers would have been sleeping in the room the fire started in if his family was home the night of the attack (Photo by Abed al Qaisi)
By
Sheren Khalel
, Abed al Qaisi

DUMA, West Bank - It was still dark, the village in a quiet slumber, when the attackers crept in with firebombs and spray paint during the earliest hours of the morning. Asim Dawabsha and his family weren’t home that night, a fact for which he will be forever grateful. His neighbours weren’t so fortunate.

On 31 July, Israeli settlers set fire to two houses in the village of Duma in the northern occupied West Bank. Ali Dawabsha, an 18-month-old toddler, and his father Saad were killed in the attack. His older brother Ahmad, four, and mother Riham Dawabsha, who suffers from third-degree burns on 90 percent of her body, remain in the hospital in critical condition.

Asim and his family live next door to the other Dawabsha family who are distant relatives, but during the night of the attack Asim and his family happened to stay a few miles away at their small unfinished apartment in nearby Nablus, all because Asim had to stay late at work.

“We planned to come home that night,” Asim tells Middle East Eye, sitting in front of his burnt shell of a home. “But I was held up at work, I was coming home much later than normal, so I told my family to stay in Nablus and wait for me there and we decided we’d go home the next morning.”

Instead, Asim got a call around 2am, telling him his house was on fire and he had to come quick. Asim and his wife, Iman Dawabsha, hurried home, leaving their small children under the supervision of their 17-year-old son.

In the area surrounding Asim’s house, visitors come and go constantly. A large green tent is still set up for mourners at the funeral of 18-month-old Ali and his father Saad. Older men sit in groups on plastics chairs, drinking Arabic coffee spiced with cardamom from miniature paper cups, going over the tragedy again and again.

On a concrete wall opposite Asim’s home, Hebrew graffiti is scrawled in black: “Long live the king messiah,” a tag believed to have been left by the settlers who attacked, along with the Hebrew word “Revenge!” near the other burnt home.

Revenge for what, Asim is not sure. “For being alive I suppose,” he says shaking his head.

Most of what is left of Asim’s home is charred black, melted and covered in soot. Today the family lives out of the two rooms untouched by the fire on the top floor of the burnt structure.

‘Living in a state of terror’

Even though the family sleeps together in one room now, Asim’s seven-year-old son Mohammed hasn’t been able to willingly close his eyes to sleep since the attack.

“He stays up until he passes out from exhaustion,” his mother Iman tells MEE. “They both do,” she says, motioning between Mohammed and her other young son.

When Iman suggested that her family go stay in Nablus until things calmed down and went a little back to normal, Mohammed threw a fit.

“He insisted we stay here. He said ‘I want to stay and protect our house,’” Iman says. “What could I say to that?”

When MEE asked the boy if he knew why his house was attacked, he answered simply, “They hate us,” while gripping his father’s thumb in both his hands.

Iman and her family have decided to stay in the two small rooms on the second floor of their home, but she says she has no idea what the future holds. They are waiting for inspectors to come and examine the home because they aren’t sure whether or not it is even safe for them to be staying above the burnt structure.

“The entire village is living in a state of terror,” Mohtaseb Dawabsha, Iman and Asim’s 17-year-old son, tells MEE. “Everyone is scared. It’s not like they got us at the edge of the village or something, we live right in the middle of the village. We never thought anything like this could happen in the centre. They attacked us to send a message, that they can get us anywhere, even in the middle of our village surrounded by all our people. We received their message, we understand.”

Mohtaseb can’t stop replaying different scenarios of what could have happened if his father wasn’t home late from work that night.

He says the air conditioner is the main detail he can’t get out of his head. The room in which the windows were broken and firebombs were thrown to start the fire was also the only room in the house with air conditioning, and therefore the room he and his brothers had been sleeping in every night during the hot summer to keep cool.

“We would have been killed the same as our neighbors. My family would have been sleeping in the front room that night,” Mohtaseb says, making his way through the burnt house, glass and burnt wood cracking under his feet. “It was during the heat wave, so that’s the room we would have been in if we were home, I am sure of that.”

Mohtaseb says the whole village has been affected by the attack, and now no one feels protected.

Because Duma is in Area C of the occupied West Bank, the village falls under full Israeli control.

“We don’t have the luxury of calling for the police or emergency help; there are no officials to protect us here, the only protection is for the settlers who did this,” Mohtaseb says.

It’s for that reason the young men of his village have decided to take things into their own hands, starting their own makeshift security team to guard the village at night. He says he believes it’s the only way to make his family and the rest of his community feel safe again in their homes, a feeling people in Duma haven’t had since the attacks.

“It's not just me or my family who is scared, it’s all the area that is scared. All of the kids know what happened, they know the area isn’t safe."

All the kids here are like my brothers, they don’t sleep at night,” Mohtaseb says, standing in a circle of friends who have taken on security roles in the village. “Before everyone slept in their rooms, but now all the families in Duma are sleeping in one room, we all sleep together because everyone is scared.” 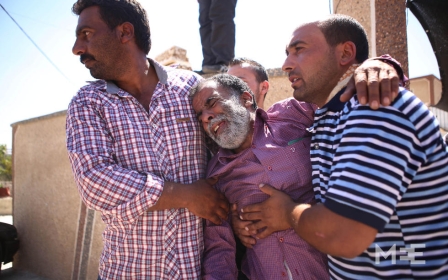