Father of Palestinian toddler burned to death dies of injuries

'The mother will soon follow, and for the son, Ahmad . . . I wish him to die, not to live with this miserable condition,' a Duma local told MEE. 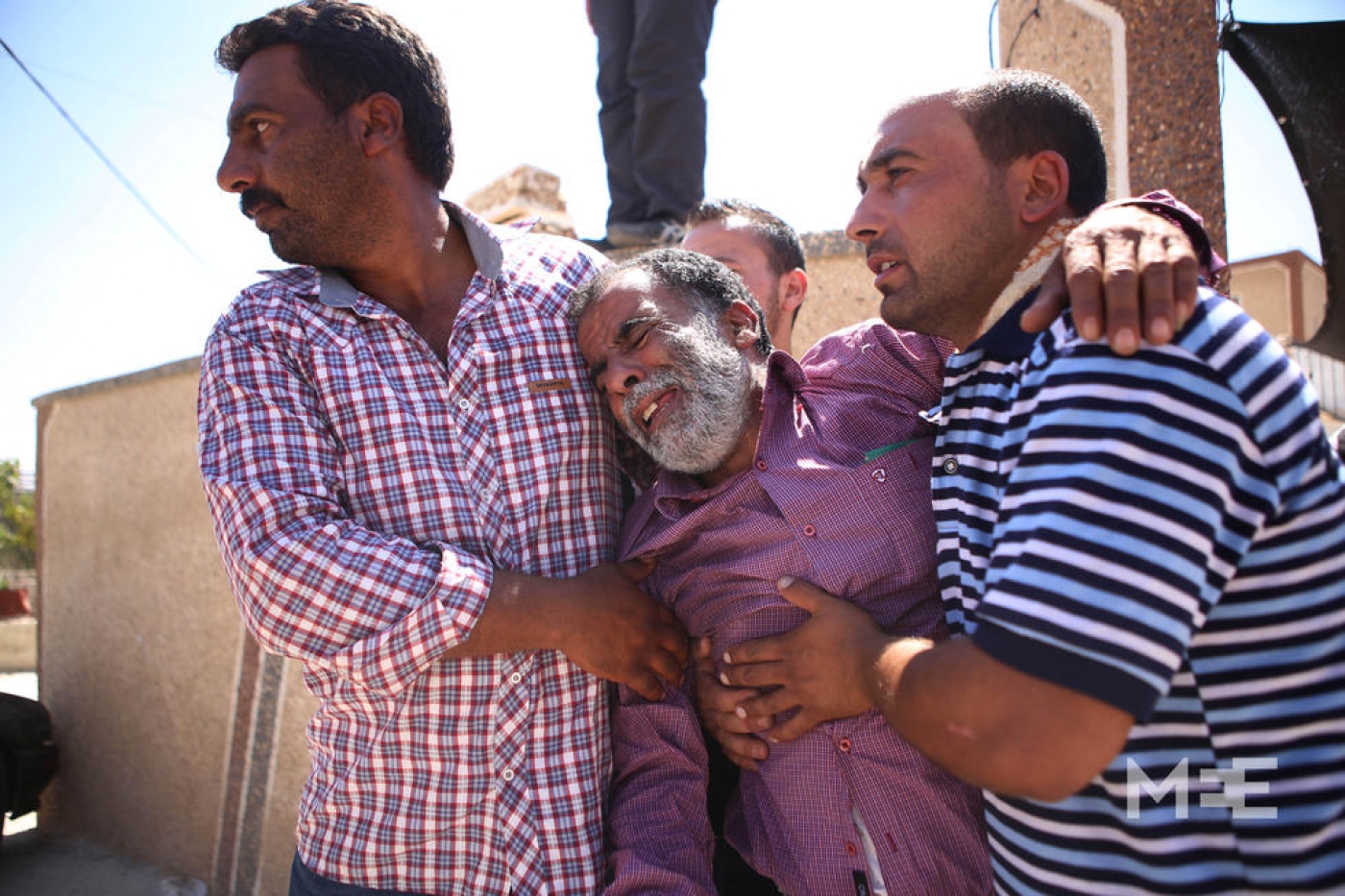 Husen Dawabsha, father of Saad Dawabsha, mourns as his son's body returns home on Saturday for the funeral (MEE/Shadi Hatem)
By
Shira Rubin

JERUSALEM - Saad Dawabsha, the father of the family whose West Bank home was torched last week – a fatal attack which killed his toddler son - succumbed to his wounds early Saturday morning at the Soroka Hospital in Israel.

More than 80 percent of Saad Dawabsha’s body had been covered in second-degree burn wounds from the arson attack on 31 July, in which suspected Israeli settlers firebombed two houses in the middle of the night.

His body was transferred through the Qalandiya checkpoint toward Nablus ahead of an afternoon funeral at the village cemetery, where he will be buried alongside his 18-month-old son, Ali, who burned to death in the bedroom he shared with his brother and parents.

Saad’s wife, Reham, is still in critical condition and on life support at Tel Hashomer Hospital near Tel Aviv, along with their four-year-old son, Ahmad. A video posted to Facebook by the Duma security council Friday night showed that Ahmad had woken up and was responsive, though is suffering severe burns on his face and body.

“The mother will soon follow, and for the son, Ahmad, he is part of my family, for him, I wish him to die, not to live with this miserable condition,” said Zuhdei Dawabshah, a Duma local who works at the village security council.

Zuhdei said that over the past week Duma, once a “village of peace,” has changed.

“The men whose brother and nephew was burned to death will do something. He will be not a good man if he doesn’t do something,” he said. “If he sees an army hitting someone, he will have to kill him.”

Since Friday’s attack, neither Israeli nor Palestinian security forces have offered to secure the area, leaving the residents to take care of the situation themselves, many said. Members of the Duma security council have been stationed among the trees throughout the night on the lookout for follow-up attackers.

The village of Duma is in Area B, under joint Israeli and Palestinian authority, though it is surrounded by a cluster of gated Israeli settlements, where many villagers, such as the deceased father, Saad Dawabsha, work as day laborers.

Tensions have remained high across the West Bank following the attacks, and clashes between protesters and Israeli soldiers left two dead last Friday.

The arson attack was condemned across the political spectrum in Israel and, in a rare move, defined as “Jewish terror” by Israeli Prime Minister Benjamin Netanyahu.

However, while an official crackdown on Israeli radicals led to the arrest of a number of ultra-nationalist Israelis, including Meir Ettinger, the grandson of the ultra-right wing politician Rabbi Meir Kahana, none were made in direct connection with the Duma arson.

Witnesses from Duma said that on the night of the attack they saw two masked men running away from the scene of the crime, leaving behind them two burning houses and graffiti on the wall reading, “Revenge!” and “Long live the messiah,” alongside a Star of David.

They are suspected both by Palestinian and Israeli authorities to belong to the so-called “price tag” movement, made up of mostly radical youth settlers who vow that every time Israel moves to curb the West Bank settler movement, they will exact a “price” in the form of vandalism or violent attacks.

Of the 141 instances that have taken place over the past year, 43 have taken the form of violent attacks on Palestinians rather than properties, said Udi Levy, chief commander of a special task force charged with battling the “price tag” movement. Two years ago, the movement carried out 328 attacks, involving slashed tires, burned olive orchards or racist graffiti on religious sites, but none directly against Palestinian individuals.

While hundreds of perpetrators have been arrested, but less than 8 percent of filed cases ever result in indictments, according to the human rights NGO Yesh Din.