A Shia act of piety or forbidden trend? The debate on self-inflicted wounds on Ashura 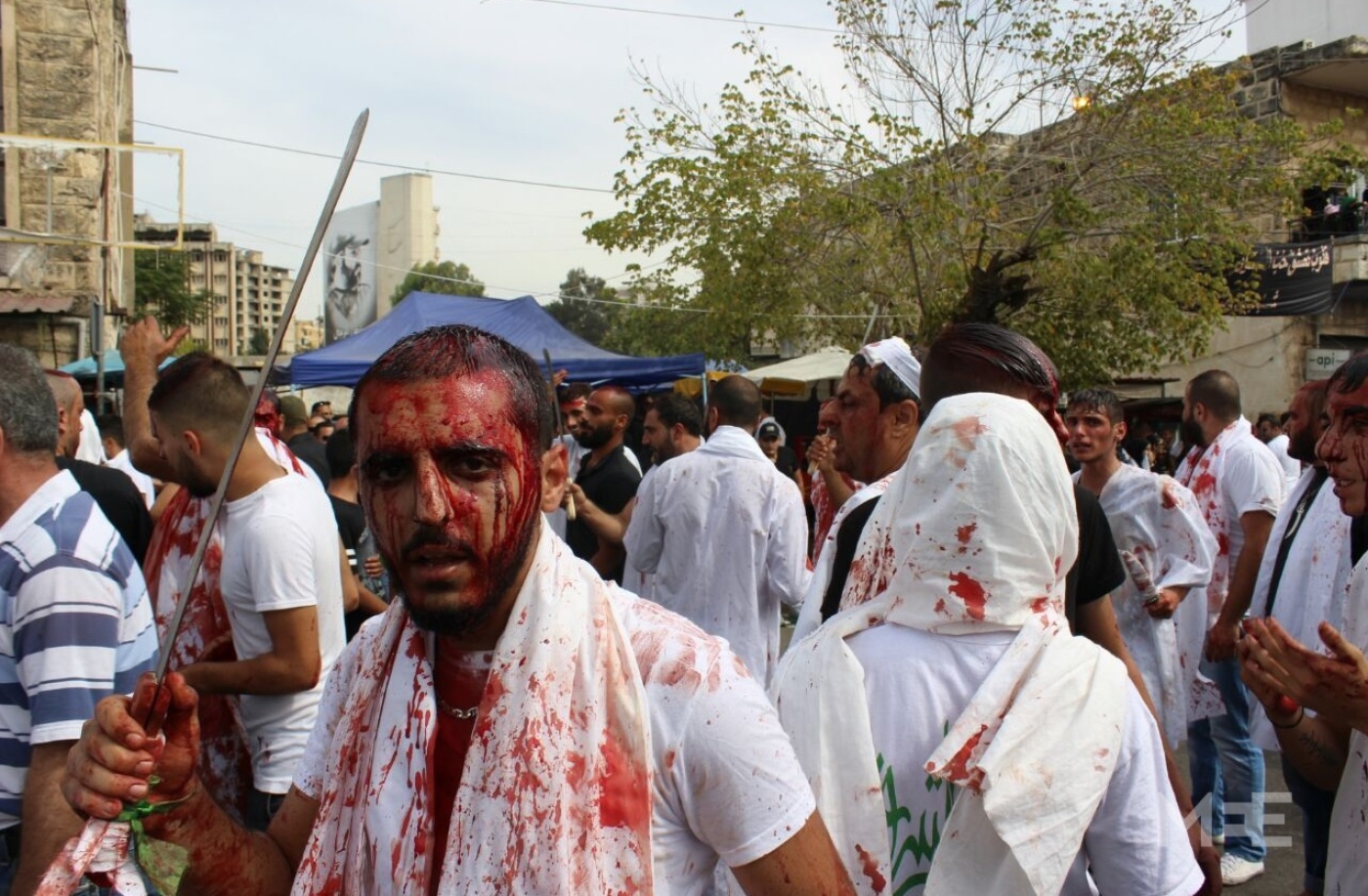 Abbas, 19, says the bloodletting ritual is among the most important parts of the religious festival of Ashura (MEE/Lizzie Porter)
By
Lizzie Porter

NABATIEH, Lebanon - Abbass pulls a cut-throat razor from his pocket, and shows me the blade, glistening under the roaring sun.

“I am waiting for my friends, and then we will go to cut ourselves,” the 19-year-old says. He mimics the series of sharp blows he will make to the crown of his head. “I will maybe cut more than last year. I have been doing this since I was two years old.”

The business management student also has a two-foot long blunt sword in his hand – "$10, bought from just round the corner,” he says.

This conjuncture would be slightly unusual – were it not the tenth day of Ashura, a period of mourning, for Imam Hussein ibn Ali, the Prophet Mohammed’s grandson. Killed in 680 AD by Caliph Yezid I’s forces during the Battle of Karbala, in modern-day Iraq, Hussein is revered as the third imam by Shia.

It would even be more unusual were we not in the southern Lebanese town of Nabatieh.

An hour from Beirut, this Shia majority town is one of a few places in the world where the last day of Ashura sees mass practice of tatbir. Men, boys and a few women make incisions on their foreheads, before repeatedly hitting the wound with the flat of a sword to keep the blood flowing.

50,000 people gather in Nabatieh for the commemoration, among them women representing members of Hussein’s family, cloaked in black and holding plastic dolls wrapped in green swaddling. “Dead,” one says, making a cut-throat gesture. Stalls selling sweetcorn and water line the streets, and a veritable paparazzi of onlookers snap away on smart phones.

But, among tight security, the attention focuses on the groups of increasingly bloody men and boys, who cut their foreheads in mourning for Imam Hussein. They parade in their thousands through Nabatieh’s streets, chanting, “Haidar, haidar!” - meaning lion, an alternative name for Imam Ali, Hussein’s father.

For some Shia Muslims, with no tatbir, there is no Ashura.

“The tatbir is the best thing I can do for Ashura,” continues Abbass, who asks that MEE publish only his first name. “Here I am with people I love. It is the best day and the saddest day at the same time.”

But in a region where politics and religion are seldom separate entities, the practice is undeniably divisive. Sunni Muslims, along with many other Shia, consider it haram or forbidden in Islam because it constitutes a form of self-harm.

In Iran, Ayatollah Khamenei has issued a fatwa against it.

During this year’s Ashura, a spokesperson for the Iranian Grand Ayatollah Sayyid Ali al-Sistani issued a statement that avoided clarifying his position on the practice. He said that the leader would not get involved in “such a fruitless debate,” blameable on “those who ignite it every year with the purpose of defeating the opposing party”.

In Lebanon, imams in Nabatieh close to the political party the Amal Movement have condoned tatbir, saying bloodletting on one day of the year in memory of Hussein is acceptable.

Many of Nabatieh’s residents are Amal supporters, and – today at least – posters of its founder Moussa al-Sadr far outweigh those of Ayatollah Khamenei or Hezbollah’s Party Secretary Hassan Nasrallah. Bands of youth in T-shirts bearing the party’s logo are prominent among the blood-letters, although Abbass insists that groups form based on friendship and villages, not political affiliations.

One man, who stumbles off to follow a group of mourners before he can give his name, claims it is “politics” that bans tatbir.“ It is a necessary part of our worship,” he bellows.

Hezbollah, (also refered to as the Party of God), Amal’s fellow Shia political party, distinctly disapproves of the practice. Nasrallah has advised followers to donate blood instead of cutting themselves.

On the tenth day of Ashura, participants in Nabatieh are required to pass a checkpoint manned by guards in Hezbollah jackets, but once inside the procession space, only a small number of guards are visible. A spokesperson for the Party of God said that, as was tradition, they would hold their own separate, blood-less celebration in the town on the thirteenth day of Ashura.

One Hezbollah supporter in Nabatieh sits well out from the tatbir and wrinkles his face in disgust when blood sprays from participants onto his hands.

“I am Shia but I really do not like this cutting,” he tells Middle East Eye, speaking on condition of anonymity. “I give blood instead,” he adds, making an injection gesture on his arm.

But he explains another reason for the large numbers gathering in Nabatieh and al-Dahiye, Hezbollah’s stronghold in the southern suburbs of Beirut.

“Sons, brothers and fathers are dying fighting in Syria every day. I have lost so many friends, so many friends. That’s why people are coming here in such large numbers.”

Tradition and the desire to gather among other fellow believers are behind the wild popularity of Ashura, and tatbir in particular, in Nabatieh.

Professor Andrew Newman, an expert on Shiism at the University of Edinburgh, explained that one reason for increasing participation in Ashura rituals could be a statement of solidarity against perceived threats, whether against Bahrain’s monarchy, Sunni extremists in Iraq, or the Taliban in Afghanistan.

Days previously, a Saudi-led coalition air strike on a funeral in Yemen killed 140 people, and many of the Shia in Nabatieh cite their participation as solidarity with the victims.

Zeina, who gave only her first name, from the town of Bint Jbeil, listened quietly to a sermon in the Hussainiya, the religious building from which the Nabatieh’s Ashura processions begin.

“This is the first time I have been here in 20 years,” she said. “Look what happened in Yemen. There is fear and violence and problems in the world and here we Shia come together. We want peace for others and we wish that they want peace for us too.”

The student, Abbas, who soon disappears to begin his tatbir, adds:

“It [the bloodshed] makes us feel the pain of our people, people who are killed. Why do people kill other people? The same people who killed Imam Hussein are still killing us up until now. All people hate us [Shia] and I feel sorry and sad for that.”

Around midday, a grand ta’ziyeh – re-enactment of the Battle of Karbala – takes place, with actors mounted on horses and camels playing out the slaying of Hussein by Yezid I’s armies, in front of whom Hussein is believed to have stood alone. It is a professional piece of theatre, watched by thousands of spectators clad in green and black, some people hanging off nearby rooftops, cardboard juice boxes used as make-shift fans against the heat.

Women do not traditionally take part in tatbir, but today a few join in, citing their reason as the “love of Hussein”. Mona, 29, from Nabatieh, says “we do this to be like Hussein,” before moving away as part of a large crowd, chanting and beating their foreheads, making blood spray from them. “I do not feel anything, I do not feel pain,” she says.

A small number of young girls are also cut, their heads now wrapped in bandages.

“The belief is passed from father to son, and we want to do this to make sure our children learn the love of Hussein,” says the father of one girl, who does not wish to give her name.

17-year-old Reem, however, is not shedding blood. She and three female friends, clad in elegant emerald green headscarves, interpret their faith differently.

“God says we should live in peace and not hurt ourselves,” she says eloquently.

“We want to show people in Yemen and Bahrain that they are not alone.”

She adds that the cutting is “a bit of a trend” among some people. "One person does it and then the others follow. Some girls do it, if for example they want more chance for an exam or something, (through an increase in blessings) but that is not the tradition. It depends on the person.”

The need to see blood

Indeed, the occasion is not without its victims.

Ali al-Nasreddine, post manager for the Islamic Risala Scout Association first aid workers said last year his team treated 1,200 people for blood loss and fainting. “Some people faint at the sight of blood, others at the heat. We treat wounds and do everything we can here – only in extreme cases do we take people to hospital.”

They expected similar numbers this year. “And the other first aid posts, like the Lebanese Red Cross, will maybe also see 1,000 each too.”

At the station, spray bottles of liquid Savlon are placed next to bowls full of white bandages. Later, they are wrapped around the heads of people who have been patched up after participating in the tatbir ritual.

Authorities did not respond to MEE’s request for comment on how many hospitalisations took place on the day. But one man soaked in blood was seen suffering fits during the processions, and aid workers carrying stretchers accompanied every group of blood-stained mourners.

As midday comes and goes, the crowds thin in the streets. Rubbish and white calico over-shirts, blossoming with red stains, litter the streets, which city municipality workers sweep clean of blood.

As Nabatieh empties, the half-joking words of one security guard ring clear, although are not, perhaps, an entirely logical argument in favour of tatbir.

“It’s important you know the facts behind this tradition,” he says. “These people live in the Middle East, they need to see blood – since they will see a lot of it in their lives”. 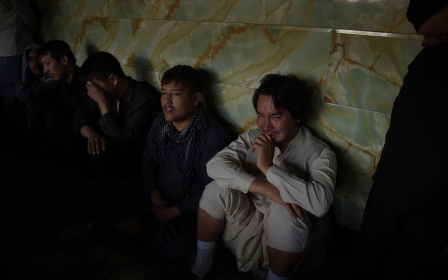