Shisha is smokin' in Amarillo, Texas

For hookah businesses in Amarillo, Texas, one of the most conservative parts of the US, 'shisha is good and so are the people' 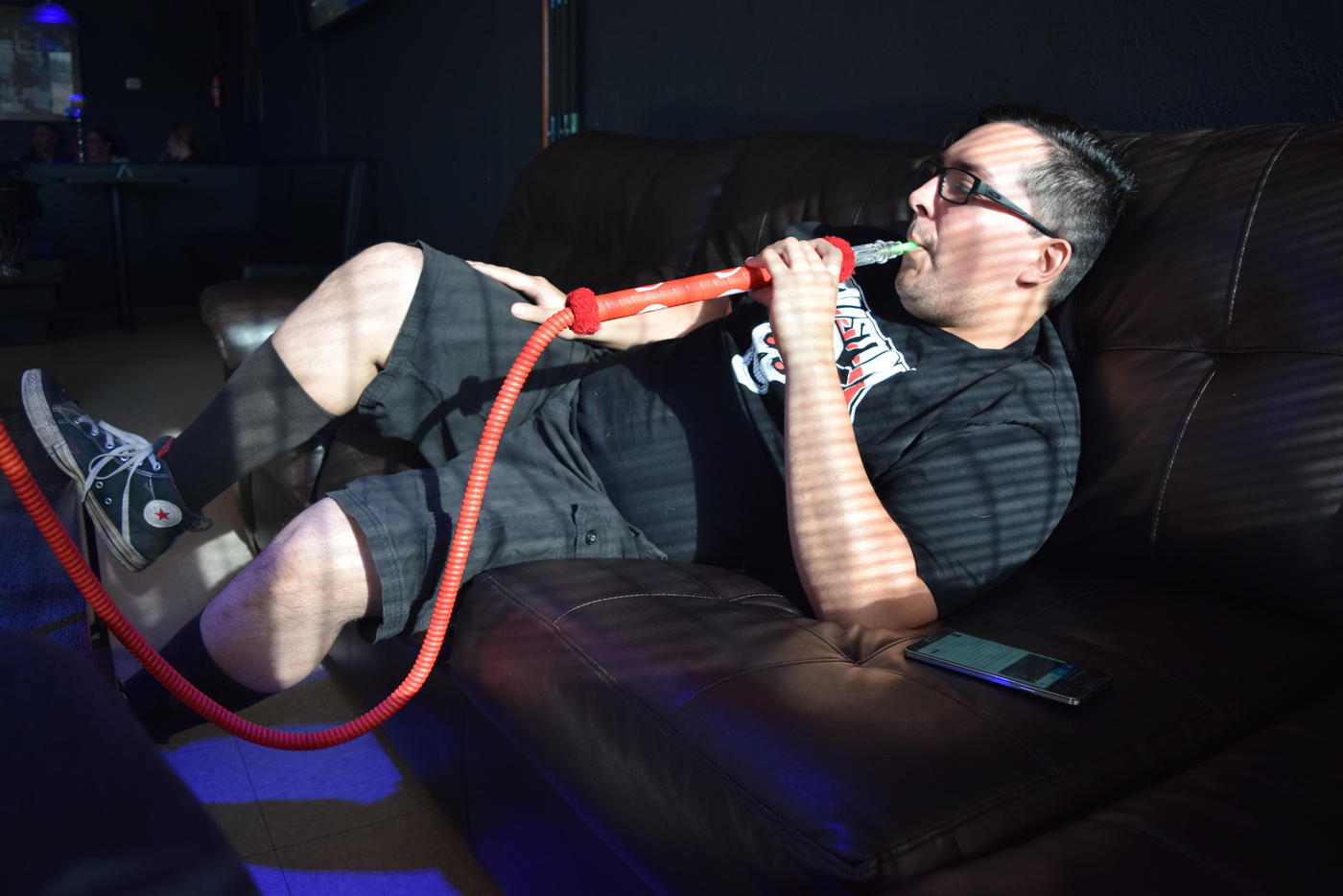 Jose Cordova, 28, takes a puff of hookah at Ahvaz on 15 August 2016 (MEE/Creede Newton)
By
Creede Newton

AMARILLO, Texas - Sitting in a darkly-lit room, a stone’s throw from a store that sells clothes and equipment for rodeos, Jose Cordova, 28, took a big puff from an ornate hookah.

“This mango tobacco is surprisingly good,” he told MEE. The pipe he was smoking at Ahvaz lounge used a hollowed-out grapefruit as the head to hold the tobacco, making it particularly “fresh”.

Amarillo, the regional capital for the Texas Panhandle, is one of the most conservative parts of the US. Many of the typical Texas stereotypes - cowboys, rodeos, cattle, boots, jeans - come from here. But a new trend is making its presence felt among the cowboy boots: shisha. This ancient water pipe - also known as hookah, arguileh or hubble-bubble and which has its origins in Persia and India - is used to smoke tobacco mixed with flavours and molasses for a sweeter experience.

Cordova is a long-time cigar smoker, but discovered the Middle Eastern water pipe roughly a year ago. “When the head is packed right and there’s the right number of coals, it’s smooth.”

It is also cost effective. A decent cigar costs between $8 and $14 at local shops in Amarillo. By contrast, a small water pipe, coals, and 250 grams of tobacco cost around $25. That's enough to supply a regular hookah smoker for a month, whereas a single cigar lasts only a few hours.

“It tastes better [than a cigar], costs less, and you can inhale more smoke,” Cordova said. “Shisha is what’s good.”

Sam K, who asked that his last name not be used in the article, is the owner of Ahvaz. Sam opened the lounge a year-and-a-half ago and named it after his hometown in Iran. Business has been getting better and better, he told MEE. “It’s not just people from the Middle East,” he began. “Blacks, Mexicans, and whites all come here. Shisha is good and so are the people here. It makes sense they would come together.”

Amarillo, a city of over 190,000 residents, is pretty diverse. In 2010, the population was roughly 60 percent white, 30 percent Latino and 6.3 percent black. But since then, partly through the US refugee resettlement program, many refugees have settled here. The city is now home to Afghans, Iraqis, a few Syrians, Burmese and others.

Sam comes from the Christian community of the Islamic Republic of Iran. In 2006, when a census was last taken in Iran, there were nearly 110,000 Christians in the country. Even though they make up the second-largest non-Muslim religious minority, Sam says that life was not easy.

“I came here four years ago, as a Christian refugee,” he continued. “It was hard there for my family, and for the members of my community.” Sam told MEE he faced discrimination in Iran from government institutions and his fellow Iranians. “At the market, people wouldn’t touch the fruit I had touched. I was 'unclean'.”

But in the small, conservative city in the Texas Panhandle, Sam feels he found his home. “I’ve had no problems since I arrived. The people here are very nice. When someone asks me where I’m from, I tell them Texas.”

Sam admits that people could be suspicious when they first meet him, but adds that being polite and courteous is all that is needed to be viewed with respect. “Classic ‘Southern hospitality',” he said.

As for the hookah businesses, it has never been better. Since the doors of Ahvaz opened, Sam's clientele has increased steadily. “Lots of people in the US used to smoke shisha, and then cigars took over. But it’s turning around. I think shisha will be as popular soon.”

One local cigar company echoes Sam's prediction. Total Flame Cigars, also based in Amarillo, is the first in the world to use cigar tobacco for shisha smoking.

According to Jones, this new type of tobacco has major advantages. Just as a cigar’s flavour changes as it burns, so too does their new shisha tobacco. The effect causes a varied experience that cigar aficionados adore, and Jones said the effect is similar when smoked with a water pipe.

An hour-long session also only uses up two grams of tobacco, as opposed to the 10 grams usually recommended with standard shisha tobacco.

But there is a drawback. “The new tobacco regulations put in place by the Food and Drug Administration (FDA) make it very difficult for us to sell the tobacco in the US,” Jones continued, referring to a new set of rules meant to put shisha, electronic cigarettes, boutique cigars, and other forms of tobacco under the purview of the US government.

These rules, which came into effect on 8 August, mean that any tobacco products produced after 15 February 2007 will have to be submitted to the agency for approval. All those created before that date will be allowed to stay on the market.

When asked if this regulation was a response to the growing, nationwide popularity of shisha, Jones replied that “it wouldn’t surprise me. The regulations make it difficult, so for now we’re only selling the tobacco in Russia, where it’s produced.”

Russia has rules against cigarette smoking in public spaces like restaurants, but not shisha. As such, there’s great demand. “We want to sell it [in the US]. We’re excited about it,” Jones continued. “We’ll have to wait and see if it’s feasible with these rules.”

No plans to quit

The FDA is not the only government agency to battle shisha’s growing popularity. The Center for Disease Control (CDC) updated its page on hookahs last September. It informs readers that the smoke, even though it passes through water, still “has high levels of these toxic agents” and is “at least as toxic as cigarette smoke”.

Back at Ahvaz, Cordova said that he had read the CDC advice and found the information to be suspect.

“The studies they cite don’t seem to have many hard facts, they’re mostly qualitative,” he said, meaning that they rely on feedback and opinion from users. “Some of the facts they do have are wrong. The CDC says a typical session has 200 puffs, but I’ve never smoked that much at one time,” the 28-year-old said.

In any case, Cordova has no plans to stop smoking any time soon: “I know it’s not good for me, but I also know it’s not as bad as cigarettes.”