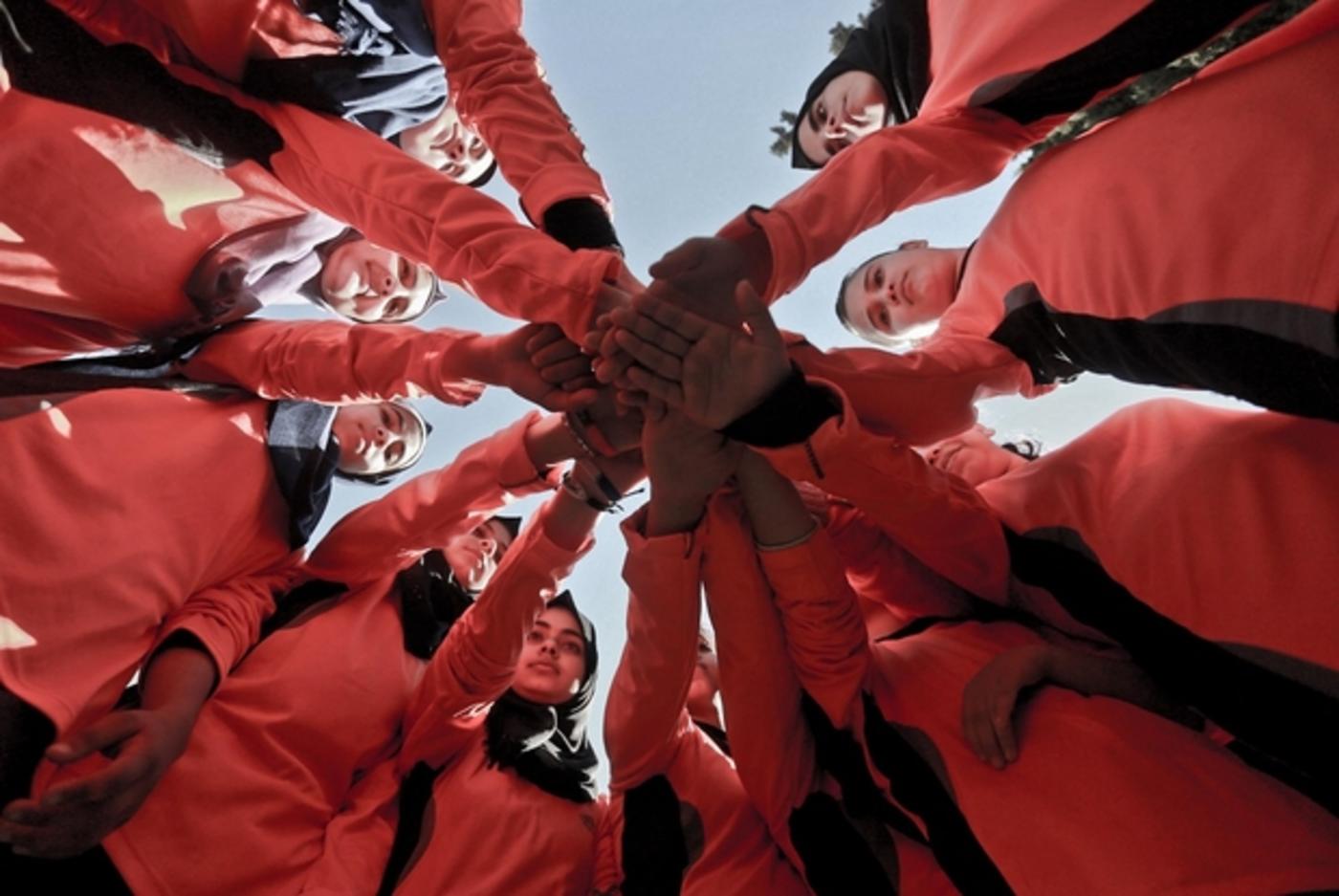 Khadamat al-Nosirat, the winning team from the all female football tournament, before the match on 18 February 2017 (MEE/Mohammed Asad)
By
Mousa Tawfiq

GAZA STRIP - When Hadeel Eid, 14, got a football as a gift for her fourth birthday, she had no idea that 10 years later she was going to be winning a football tournament with a scoring goal.

Dozens of young women and journalists gathered on Saturday, 18 February, to watch an all-female football match between Khadamat al-Nosirat and Shabab Rafah sport clubs at the YMCA in Gaza city.

The two teams warmed up as coaches gave players their final instructions and advice. Meanwhile, the audience did not stop cheering with "Go Khadamat" and "We are Shabab."

Buses filled mainly with girls and journalists arrived from all over the Gaza Strip to witness the sporting event, the first all female tournament of its kind since 2007, when Hamas came to power.

"We used to have football tournaments for girls, and we also had a Gaza girls’ football team. But because of Hamas' control over Gaza and extreme religious pressures, these activities stopped in 2007," said Mohammed Hajjaj from the Palestinian Olympic Committee’s information department.

When Hamas took control of Gaza, many institutions - especially those related to the Palestinian National Authority - suspended their activities because they were afraid of how ultra-conservatives in Hamas would react. Today the situation is much clearer and Hamas accepts female sports activities where there is not much mixing between males and females.

The participants are young females between the ages of 12 and 18 that are working with respected organisations.

This junior women’s football tournament is part of a project called "Sports for Development," which is funded by the Japanese government and implemented by the United Nation’s International Children's Fund (UNICEF) and Ma'an Development Center.

"We must help in giving them more opportunities to express themselves and improve their capacities,” said Majd Majdalawy, project coordinator at Ma'an.

Five clubs took part in the tournament and competed on three fields. "We hope to have more participants in future opportunities," Majdalawy said.

The match started with enthusiasm as every team member tried to reach the opponent's goal. A few minutes later, after strikes from both sides, Eid scored for Khadamat al-Nosirat - the only goal of the match - and helped her team win the tournament.

Eid is without a doubt the team's star. As a natural born leader, she does not shy away from giving instructions to her teammates, having learned skills from her father and getting practise at the family farm. "My father bought me a ball for my birthday. He was a football player when he was young," Eid said. "I play football with my brothers and cousins at our farm," she added.

Eid comes from the rural town of al-Zawayda, near the central Gaza Strip town of Deir el-Ballah, where around 22,500 people live. In comparison to other more conservative areas of Gaza, al-Zawayda is more accepting and open to women's rights, including developing their talents and playing sports.  Women there usually help men harvest and plant thier farms as well, and assist them in doing difficult physical work.

'I don't do anything wrong when I play football. In fact, I feel free and happy'

Eid said that she had never felt that she was doing anything abnormal by playing football - a man's sport from the point of view of the majority of Gazans. "My family encourages me. Even in the neighbourhood, no one mocks me. I don't do anything wrong when I play football. In fact, I feel free and happy," she said.

Although Eid is not the tallest among her teammates and does not have the strongest body, she performed very well during the final, a result of natural talent and extensive training.

"She was a leader during training and even during matches. I strongly believe that she is capable of excelling with her talent," Mohammed Abu Yousef, 25, the coach for Khadamat al-Nosirat told MEE.

He added that: "At the beginning the girls [in the team] were shy, but we soon became a family and we won the tournament."

According to Majdalawy, the girls treasure simple things that make their experiences unforgettable: wearing uniforms; warming up with coaches; having audiences react to every kick and move during the matches; professional referees; and above all, medals and a cup at the end of the tournament.

Yet Eid and thousands of Gazan talents like her are deprived of any opportunities to attend international training due to the Israeli siege on Gaza.

For Reem al-Najar, 15, who plays with Shabab Rafah, playing football is more of a challenge, as her club is the only place where Najar can play football.

Girls are not allowed to play any kind of sports during physical education classes at school. "We just sit down in the school yard because teachers believe it's inappropriate for girls to run and jump."

Mostafa Hasaballah, 26, coach for Shabab Rafah, said it was very difficult to train the girls due to social issues.

"Girls cannot be late in training and they are not available all the time. They also can't play football anywhere, like boys who play in streets and public fields," he said

“I tried my best to teach them the basics of football. I taught them the rules and how to control the ball, but it's useless without training at school and home," he said. "I believe it's not about being skillful or professional. These girls are full of energy and ambition. They really deserve to be encouraged."

Watching girls playing football is an unfamiliar sight to Gazans, therefore, many people were interested in the event.

"I've been coming here for years. It's my first time to watch girls play football. I usually see them playing tennis or basketball," said Ali Abu Najeeb, 57, who regularly attends the YMCA in Gaza. "It's really inspiring to watch girls from all over the Gaza Strip standing up to all social stereotypes. We must appreciate their will and determination."

And there was no lack of support from fellow classmates. "I came here from Rafah to watch the match and to encourage my classmates who play with Shabab Rafah team," said Sana Wady, 14. "Many girls started to talk about the tournament at school. We also told our teachers that we need to play sports during sports classes. We believe that girls and boys are equal and we should play the sports we like," she added.

'It's just the first step'

The Sports for Development project is part of the Adolescent Development and Participation Programme at UNICEF which aims at building girls’ capacities by sports.

"After the success of the tournament, we will put official authorities in the Palestinian Football Association and the Ministry of Youth and Sports under a lot of pressure to have periodic tournaments and more opportunities for girls in Gaza," said Mohammed Abu Soliman, programme officer at UNICEF.

Until then, Eid, Najar and their peers are looking forward to more opportunities to play the sport they love.

"I scored six goals in this tournament. I'll keep remembering them because it makes me very happy. I look forward to playing in more tournaments and to scoring more goals, because I like it," Eid said. 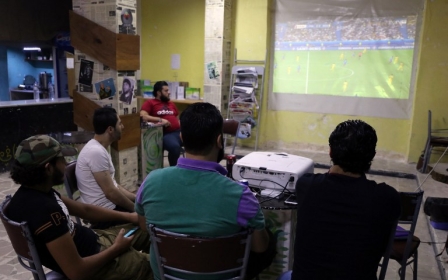 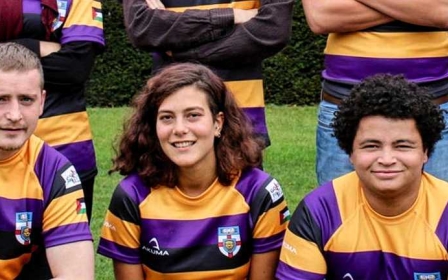 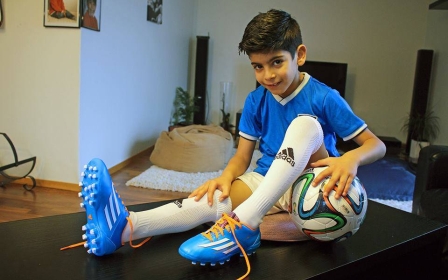