Away from the spotlight, journalists struggle to keep critical journalism alive despite the crackdown on freedom of speech in Egypt 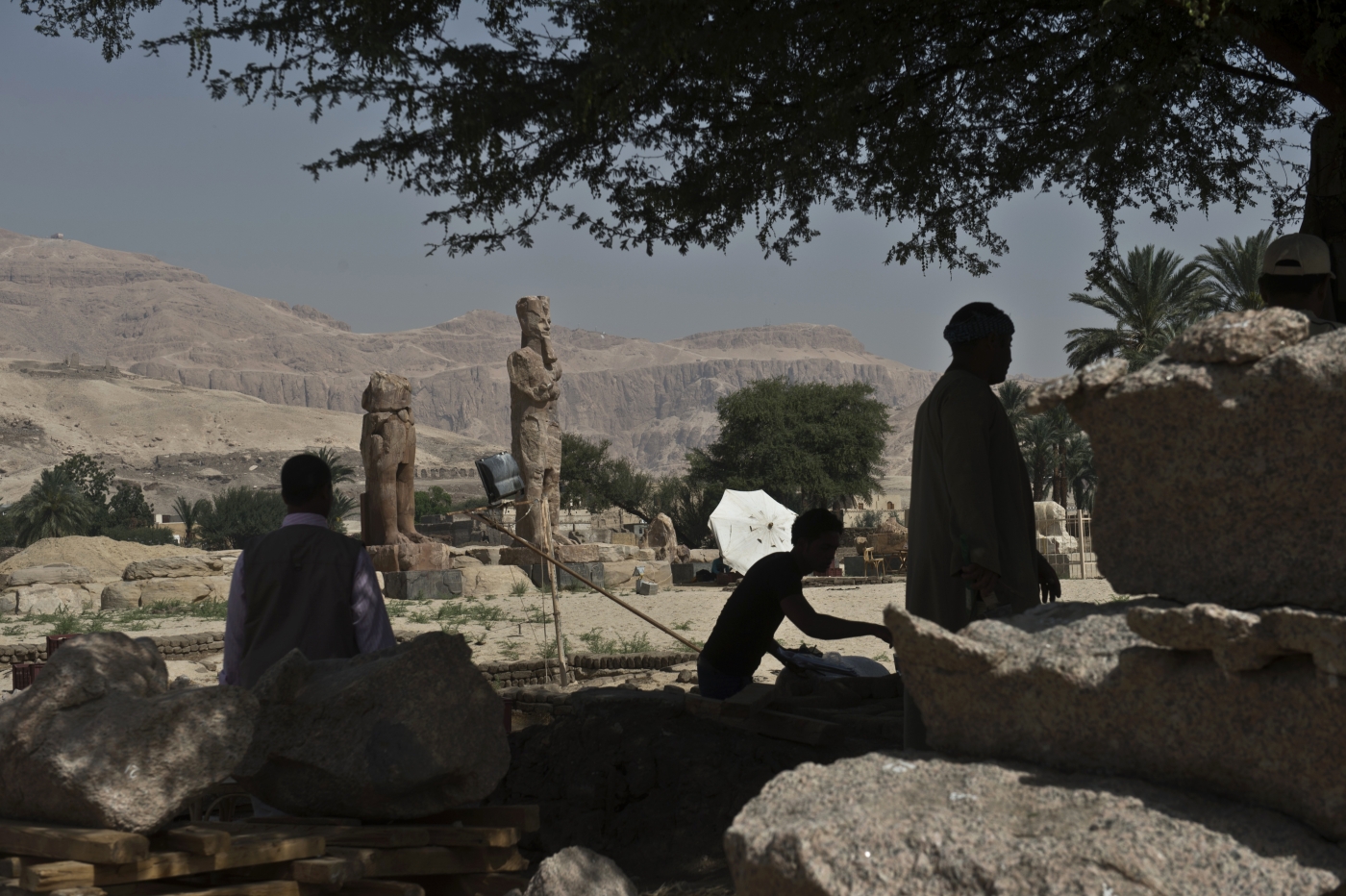 LUXOR, Egypt - On the ride out of the centre of Luxor in a microbus, which departs from a parking lot in the shadow of the colonial-era train station, it’s only a matter of minutes before you are surrounded by fields of sugar cane spreading out in all directions, crisscrossed by irrigation ditches and dirt roads.

Beside the fields sit dormant carts on narrow rails, piled with golden bushels of sugar cane hacked from the roots. Dark men in white gowns and turbans labour amid the fields, and women draped in black drift through the narrow lanes between homes. As the microbus passes through a village, the road becomes choked with motorbikes and horse-drawn carts, fine earth rising into the air.

In the village of Najaa El Fakhrania El Baghdadi, amid the fields around Luxor, Mervat Omr Amin El Fakhrani, 24, a local freelance journalist, sits with her mother and father in her darkened room in their home of concrete, mud and brick. El Fakhrani types away on her laptop furiously, preparing a TV broadcast for the evening.

El Fakhrani is part of a small cadre of young independent journalists coming of age in post-revolutionary Egypt. While most media tends to hyperfocus on the goings-on in Cairo and Alexandria, some 60 million Egyptians live outside these cities, and young journalists like El Fakhrani have taken to covering social and political developments in the country’s marginalised interior. Away from the spotlight, journalists like El Fakhrani struggle to keep critical journalism alive despite the crackdown on freedom of speech in today’s Egypt.

El Fakhrani is still fresh in journalism. She began as a correspondent for Egypt’s El Osboa news website, and worked for Welad El Balad, a community-focused news platform. She then moved on to a research position with the Southern Centre for Rights, an organisation based in the city of Aswan which advocates political and economic justice in southern Egypt.

Sitting beside her, El Fakhrani’s mother, Rawhia Mohamed Bakr, 54, and father, Omar Amin Ahmed, 61, tell me how they feel about their daughter breaking the family mould to pursue journalism.

“She can’t make a lot of money off this work. If I could choose, she would be a teacher,” said Bakr, referring to her daughter’s work, shrugging her shoulders.

Out here among the fields of sugar cane and rice, conservative social norms are closely followed. Religious observance is strong. Men congregate in cafes and the streets, while most women work at home. For women, while they are respected as chiefs of the home, moving around outside at night is to be avoided, if not outright prohibited.

El Fakhrani often comes home late in the evening, braving the streets of Luxor and the microbuses by herself. Her parents fear for her safety after dark.

“Here in the Sa’id [the name for southern Egypt], we fear for our hurma [women],” said her father. Women going unescorted at night can bring a bad reputation to the family, he added.

Yet Ahmed feels differently than his wife about his daughter’s efforts in journalism. “Me, I’m proud of what she does. She’s making something of herself,” he said, adding, “Her work is in service of the country.”

Ahmed is a construction worker. Work is often spotty in his village. For two periods in the early 1980s and 90s, he lived in Saudi Arabia, working as a migrant builder to save enough money to feed and educate his four girls and two boys, El Fakhrani among them. “I spent a lot of money on her education, for her future,” Ahmed said, highlighting his hopes that she could break free of the constraints on women in rural Egypt to pursue a career.

A return to repression

But it’s not only gender norms that create barriers for El Fakhrani as a journalist. Egypt has for decades been a country in which media has been tightly controlled, and criticisms of government figures and policies actively avoided. The opening in media freedom that appeared after Egypt’s 25 January Revolution has largely been resealed since the removal of former president Mohamed Morsi and his Muslim Brotherhood backers from power by the military, led by Abdel Fattah al-Sisi, in July 2013. Since then, journalists have faced imprisonment, violence and even death.

The Paris-based press freedom organisation Reporters Without Borders has been critical of the clampdown on media in recent years, noting: “At least 30 journalists were arbitrarily arrested in 2014 alone on charges of organising or participating in demonstrations or supporting a terrorist organisation. And the authorities continue to use spurious grounds for keeping them in detention.”

The Washington-based research and advocacy organisation Freedom House notes, in its 2015 report on media freedom in Egypt, that the 2014 constitution is punctuated by numerous articles against free expression, such as media censorship “during times of war or general mobilization”. It also noted that in November 2014, the cabinet began consideration of a draft law to ban publication of information regarding the armed forces in all media outlets, including social media.

“You have to commit to silence in this period,” said El Fakhrani with a frown, detailing the harassment she has faced while working in media.

“There are informers around. Sometimes it could be one of your friends. They are offered money by police to report on you. So you feel that you can’t meet and talk in just any place,” she added.

Indeed, El Fakhrani is often ill at ease discussing her work or Egyptian politics while in public places. In cafés she frequently shoots a furtive glance over her shoulder to see who is listening.

As a researcher and media assistant for the Southern Centre for Rights, El Fakhrani said she received threatening phone calls and was followed by plainclothes police. She’s worked with foreign journalists and researchers in Luxor before, but at some personal risk in a time of state-sanctioned xenophobia, she said.

“The [security services] could arrest me in the street really easily, saying that I support foreign agendas,” El Fakhrani said.

But for Mohamed Abdel Wassae, 32, another Luxor-based journalist working at Al Shorouk News website, the closeness of the community in this far-southern province has offered him some security from harassment by government authorities.

“It’s tough for police to arrest us and keep us in jail for long. Family and tribal bonds are so strong that if we are arrested, our relatives put tremendous pressure on local authorities to release us.”

As a longtime activist and media worker, he said he’s aware of the limits on what he can safely do. Unlike El Fakhrani, however, Abdel Wassae speaks without hesitation about his life as a journalist in an open air café.

“I got interested in politics by getting involved in the Kefaya movement in 2005,” while studying law in Cairo, he said, referring to the grassroots coalition formed to protest corruption and hereditary control of political power.

Abdel Wassae recounted how the window of press freedom which began to open in 2011 has closed again.

“There was a lot of hope for journalists from late 2012 onwards after the military’s Constitutional Declaration [which gave the Supreme Council of the Armed Forces sweeping powers over national politics]. It created a lot of revolutionary movement again in the streets, and made average citizens more concerned about the political decisions being made out of their revolution.” This, he said, gave independent journalists room to report on issues to a readership hungry for critical reporting.

The old mores have been shaken

At the Southern Centre for Rights, Abdel Wassae worked as a media trainer, giving workshops to local youth on photography and research and reporting skills.

“But after the army removed Morsi from power on 3 July [2013], freedom began to decline. Now if we want to hold trainings we need permission from eight government authorities. All of the Southern Centre’s branches outside of Luxor have closed.”

Sarah El Masry, 23, a researcher at the Association for Freedom of Thought and Expression, a media research and legal aid organisation in Cairo, pointed out the harsh situation faced by freelance journalists like El Fakhrani in Egypt.

“Journalists who are freelance are in a much worse situation than those that are affiliated [with major media outlets]. State security or police may give some recognition to staffers with big newspapers,” but none to freelance journalists, especially those who are not accredited by the government, she said.

She noted that it’s easier for lawyers to win release from detention for journalists well-known to the public, mostly staff with large news outlets, who often face arrest as a result of daily harassment by state security services.

Yet while El Fakhrani is certainly part of a new trend among young women in rural Egypt joining the ranks of local independent journalists, El Masry is hopeful that the changes ongoing in Egyptian society mean she won’t be the last.

“Women working as journalists in the rural south no longer shock me after the revolution,” she said. “Social mores are still strong, but they have been shaken.”