The PCS provides hope and skills to young people whose lives have been devastated by the occupation, and now it is showcasing its work in the UK 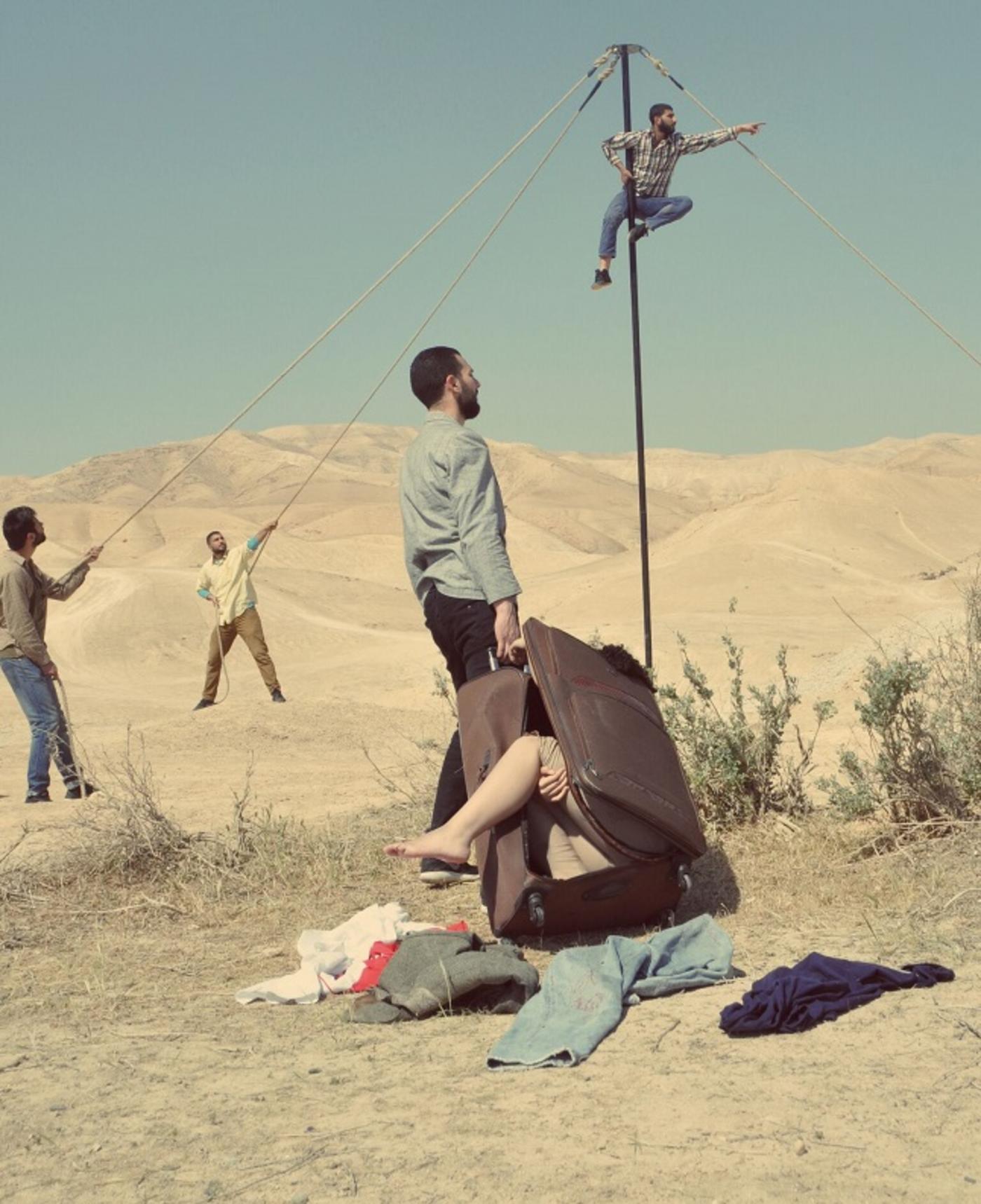 Seven members of the Palestinian Circus School (PCS) are coming to London, as part of the international festival CircusFest 2018 in April (Photo courtesy of PCS)
By
Emily Jupp

LONDON – “Occupation to me means a mental occupation of the emotions," says Shadi Zmorrod, the co-founder of the Palestinian Circus School (PCS). "It means more than just an occupation of the land. When you occupy a person, you occupy their feelings and senses until they are controlled by someone else.”

My family are refugees … They are treated as numbers, not people

For Zmorrod, the skills and trust learnt in circus training are a way to overcome this mental occupation. “But when you learn to walk a tightrope and form human pyramids, you learn to balance inside and out – and you learn to trust people.”

Seven members of PCS are coming to London, to Jacksons Lane, an arts venue in Highgate, north London, as part of the international festival CircusFest 2018 in April.

The group's one-hour performance at Jacksons Lane, entitled Sarab, which means Mirage, reflects multiple real-life stories of refugees from the Middle East, taken from the group’s intensive research speaking to displaced people in Syria, Iraq, Palestine and Germany from 2014 to 2017.

“We met lots of refugees face-to-face in camps in Turkey and Jordan and Germany where we were teaching circus,” says Zmorrod, who describes himself as "a refugee by inheritance". “My family are refugees,” he says. “They are treated as numbers, not people.”

The PCS was set up 12 years ago as a means of physical and mental rehabilitation for young Palestinians by Zmorrod and Jessika Devlieghere. They set up the first circus workshop in the West Bank and remain the only circus school in Palestine.

All people, when they run away, they run towards better conditions but actually when we run away it is just another journey, there is no heaven in front of you

The PCS receives funding from a number of international organisations, including the EU, the Drosos foundation in Switzerland, and Secours Catholiques - Caritas France, as well as many individuals and solidarity groups.

PCS now brings hope and skills to those devastated by the occupation. A contemporary circus doesn’t require much infrastructure, so while the head office in Birzeit has a circus tent and some small training halls, the performers also teach circus south of Palestine: in Hebron, Jenin, Ramallah, Jalazone refugee camp and Fara’a refugee camp.

Zmorrod, who was born in 1979 in Jerusalem, started his work in theatre as part of the International Theatre Institute, setting up theatre workshops in countries in conflict situations.

“I discovered I could make a [physical] movement say ‘I hate you’ or ‘I love you’, and people remember that movement. It is captured in the mind faster and the feeling is captured for longer in the heart than other forms of expression, so I had this idea to do something different with Palestinian youth – to teach them how to express themselves and transfer their negative energy into a positive.”

“I didn’t choose to join the circus,”  says gymnast Noor Abu al-Rob, who is also proficient in juggling, trampolining, acrobatics and dance, and who is part of the group performing in London.

He has been working with the PCS for a decade. Born in 1991, he grew up in Jenin and as a child he was into sports like taekwondo.

“I was volunteering, doing social work in Jenin and some people came to visit and said ‘we want to open a new circus in Jenin’. Back then, I thought circus was fire and clowns and animal acts, but I knew there were no elephants in Palestine, so we were curious about this circus and so we went to see it.

“The show is called Sarab, meaning Mirage,” explains Abu al-Rob, “because all people, when they run away, they run towards better conditions but actually when we run away it is just another journey, there is no heaven in front of you. The refugees think that in Europe, or another country, they will be saved but some die and don’t make it, some have new struggles when they get there.”

The show focuses on the struggles of two refugee characters, who reflect the composite stories of the different refugees the PCS met during their research.

One of the refugees is played by Hazar Azzeh, 21, who specialises in static trapeze.

Azzeh is abused and confined in the show, which relies on a combination of small amounts of verbatim speech and movement motifs to delineate the characters. She has her hands pulled up behind her back in a leverage hold when held captive by different characters and this becomes a repeated gesture when she is on the trapeze, in an acrobatics scene and in her solo choreography.

“It gives the idea of multiple crises. That this is happening again and again and again,” explains Paul Evans, the show’s UK choreographer, who says he was "sat on his laptop in tears" reading the PCS’s research. He became involved after directing the PCS on a previous project, Coffee in Town. He helped expand the narrative of Sarab and clarified the choreography for the London show.

“We are a place that has largely shut its borders and I feel we have a moral responsibility to help these countries that are in crisis,” says Evans. “The show sets up scenarios that set up multiple narratives. I hope it raises questions and provokes an emotive response.”

“We are refugees living in our own country,” says Abu al Rob, “it is this repetition of this same story that is happening everywhere all the time.”

“I wanted to try circus and then I chose to dedicate myself to it,” says Azzeh, who has been a member of the PCS for 11 years. “It was the atmosphere. It always felt [like] home to me."

As one of few female circus performers, part of her job is to show other women they can take part. As she previously told MEE, she is trying to prove that “any girl can do this, I am not doing anything wrong”.

“The circus world is open to accepting people from different backgrounds, not caring about where people are from,” says Azzeh, adding that being part of PCS, “made me more ambitious about changing the world into a better place.”

As part of this aim, the PCS has been working with all-girl groups who have been affected by violence. Zmorrod explains that circus is still much maligned and misunderstood as an artform in Palestine.

“The image of circus here is girls in bikinis on a trapeze, so the girls we work with often can’t make eye contact [with male performers when they first start working],” says Zmorrod.

The stereotype is one he is hoping to change among the culturally conservative groups of girls the PCS works with.

The circus world is open to accepting people from different backgrounds, not caring about where people are from

“In the Palestinian and Arab culture we still have the early marriage problem and that leads some of these girls to drop out of school,” explains Zmorrod. “There is big difference between one city and another in Palestine, and that's why we see it as our role to raise awareness among the more conservative societies.

"For example, last week, the Girls Rehabilitation Centre in Jenin, where we have been teaching young girls aged between 16 and 19 years old for eight years now, they decided to make their end-of-the-year presentation about early marriage and dropping out of school.”

In Palestine, even something as innocuous as teaching circus skills is not without risks.

In December 2015, Mohammad Abu Sakha, a 24-year-old Palestinian circus performer with the school, was arrested by Israeli soldiers on his way to Birzeit, where he taught circus skills to children with learning difficulties. After pressure from international human rights groups, such as Amnesty, he was finally freed after two years of being held in administrative detention, without charge, in a prison in southern Israel.

In prison he grew even more convinced of the role that the circus can have for Palestine, for the community and for its struggle towards freedom

Israel's Shin Bet security agency had accused him of being a member of the leftist Popular Front for the Liberation of Palestine, which the Israeli state considers a terrorist group. However, Abu Sakha had denied the allegations.

“It’s shocking to see how someone can be imprisoned for 21 months, without charge, and at the end be released without being charged with any crime at all,” Zmorrod told MEE at that time.

He adds: “The occupation will never be able to take anyone away from the circus school. Abu Sakha’s place was always reserved for him till he got free and he came on board within two weeks of his release.

"In prison he grew even more convinced of the role that the circus can have for Palestine, for the community and for its struggle towards freedom. He is more dedicated in his work at the circus than ever.”

It is not only the big risks like this but the smaller issues that make the day-to-day practice of running a circus school a triumph over the odds. If the group wants to perform overseas, they can’t go to another country to perform in a show without going through a convoluted process. They hold Palestinian passports so they aren’t allowed to use the airport in Israel.

"All the team have a Palestinian passport and that means we need two days extra to travel through Amman in Jordan, and tickets are double the price travelling from there rather than Tel Aviv. The long trip expends a lot of energy, especially when you arrive the day before you need to perform," Zmorrod explains.

“We were scared to be refused [visas to the UK], as we knew that lots of Arab artists who wanted to participate at the fringe festival were refused. Also we had one person, our technician, refused some years ago, says Zmorrod. “But this year, by miracle, we all got the visas rather fast. It took us around two months.”