Arab Americans vote 'for the heart and soul of America' 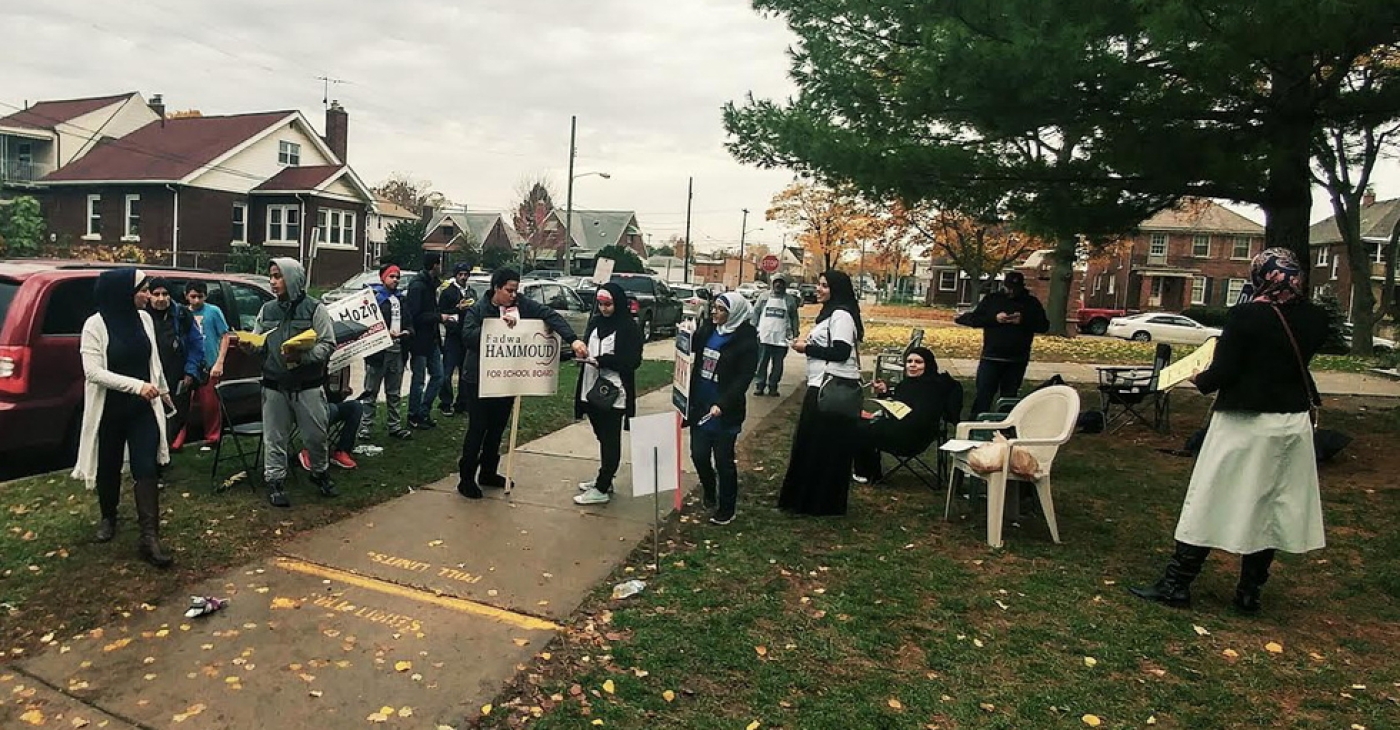 DEARBORN, United States - As results roll in, anxious Americans across the nation are watching in anticipation, awaiting the outcome of the elections, which will decide who will rule the country for the next four years and have a lasting impact on the US political and social landscape.

Hours after the polls closed, Donald Trump appeared to have a solid lead in major swing states.

In Dearborn, Michigan, a city with a large Arab American population, excitement was high throughout the day, as volunteers reported record-breaking participation from the community.

Voters in the city, known as the "Capital of Arab America", cited concerns for civil rights amid growing bigotry as a motivation to participate in the electoral process.

Khulud Fidama, a Yemeni American woman, told the Middle East Eye that combating racism and hate was her top issue in the election.

“It was easy for people to just hear a racist word from Donald Trump and act upon it,” she said referring to the rise of hate crime against Muslims and immigrants over the past year. “That made it really difficult for me as a Muslim American to watch.”

Fidama, who was wearing a Hijab featuring the American flag at an election watch party at the Arab American National Museum said the GOP candidate tried to divide the US public along religious and ethnic lines.

“At the end of the day, we’re still American,” she said. “He tried to change that. ‘You’re this or you’re that, so you’re not American; you shouldn’t be here.’”

Fidama said the bigotry will linger on after the elections because Trump opened the door for prejudiced individuals and enabled them.

As the world held its collective breath, Americans on Tuesday were called to make a historic choice between two radically different visions for their country.

Dearborn is located in southeast Michigan, a state that the Republican nominee had a slight lead over Democratic rival Clinton hours after the polls closed. The state had turned into a crucial battleground, and the Arab vote, estimated to be as high as 5 percent, was considered decisive.

“If there’s anything good that came out of it is that Islamophobia moblised Muslim voters like never before,” he told MEE. “It was also distressing and disappointing because both options were weak. Neither option was appealing. Even though there was considerable turnout for Clinton, it wasn’t a very excited movement for her.”

Beydoun rued Bernie Sanders’ defeat in the Democratic primary, saying it was a loss for progressives at large.

“For me it was a campaign ‘what ifs’. I think we missed a real opportunity,” he said referring to Sanders candidacy.

He said it would have been an easier race for Democrats if Sanders, who was heavily supported by Arab and Muslim Americans, had won against Clinton.

If Trump wins, Beydoun said, Arab and Muslims in the US will be in trouble.

Fayrouz Saad, a volunteer leading an initiative dubbed “Arab Americans for Hillary”, said Arabs turned out in large numbers across the country, not only in Michigan.

She hailed the community’s support for the former secretary of state.

Saad could not bring herself to answer how Arab Americans should react to a Trump presidency.

Aside from the much publicised national race, numerous Arab American candidates running for various local offices also drew community members to the polls.

Abdullah Hammoud, a Democratic nominee for the Michigan House of Representatives, cited environmental issues, crumbling infrastructure and public education as top issues that pushed him to run.

He also emphasised the significance of the presidential election.

“Not just to the Arab American community, but to every minority community, to every community of color - on this ballot you have the battle for the heart and soul of America,” he told MEE.

“On the one side, you have a Republican candidate who has been spewing bigotry, misogyny, racism and xenophobic rhetoric. On the other side, you have a party that’s doing its best to be inclusive and reflective of what America is: a nation of diversity.”

In Hamtramck, Michigan, which has the largest concentration of Muslims in the United States, activists spoke of unprecedented turnouts.

The town, located within the city of Detroit, had garnered national attention last year after it elected Muslim candidates to become the majority of the city council.

“I voted for Clinton. What other options do we have?” -Arab American woman

According to councilman Saad Almasmari, there were 500 votes at 11 am on Tuesday at a precinct that totaled fewer than 200 votes the entire day during the primaries.

Hamtramck has more immigrants per capita than any other city in Michigan.

“I think there are many reasons for this turnout,” Almasmari told MEE. “The main reason is Donald Trump made people come out and vote against him.”

He estimated that the overwhelming majority of Hamtramck voters favour Clinton.

On Monday, Almasmari took to Facebook to urge residents to vote, promising to personally drive or secure a ride for those who do not have available transportation.

The councilman said the election is especially critical to Hamtramck because of the media scrutiny it has been receiving.

“In Hamtramck it is very important for us for Hillary to win… Donald Trump is against us; he’s against the Muslims,” he said.

Although there was a prevalent anti-Trump sentiment among Arab Americans, not everyone voted for Clinton.

Hussein Hachem said voting is paramount to advancing Arab American causes and taking part in the decision making. However, he only voted for local candidates, skipping the presidential race.

“We’re a part of this country, and everything that’s going on around us affects us in one way or another,” he told MEE. “On a national level, I lost interest due to the personality of both candidates. It was the first time for me that I don’t vote for president, but I did vote on every other (contest).”

Despite a lack of excitement for Clinton, some Arab Americans see her as a necessary choice.

“I voted for Clinton. What other options do we have?” a young woman who wished not to be identified told MEE after casting her ballot in Dearborn.