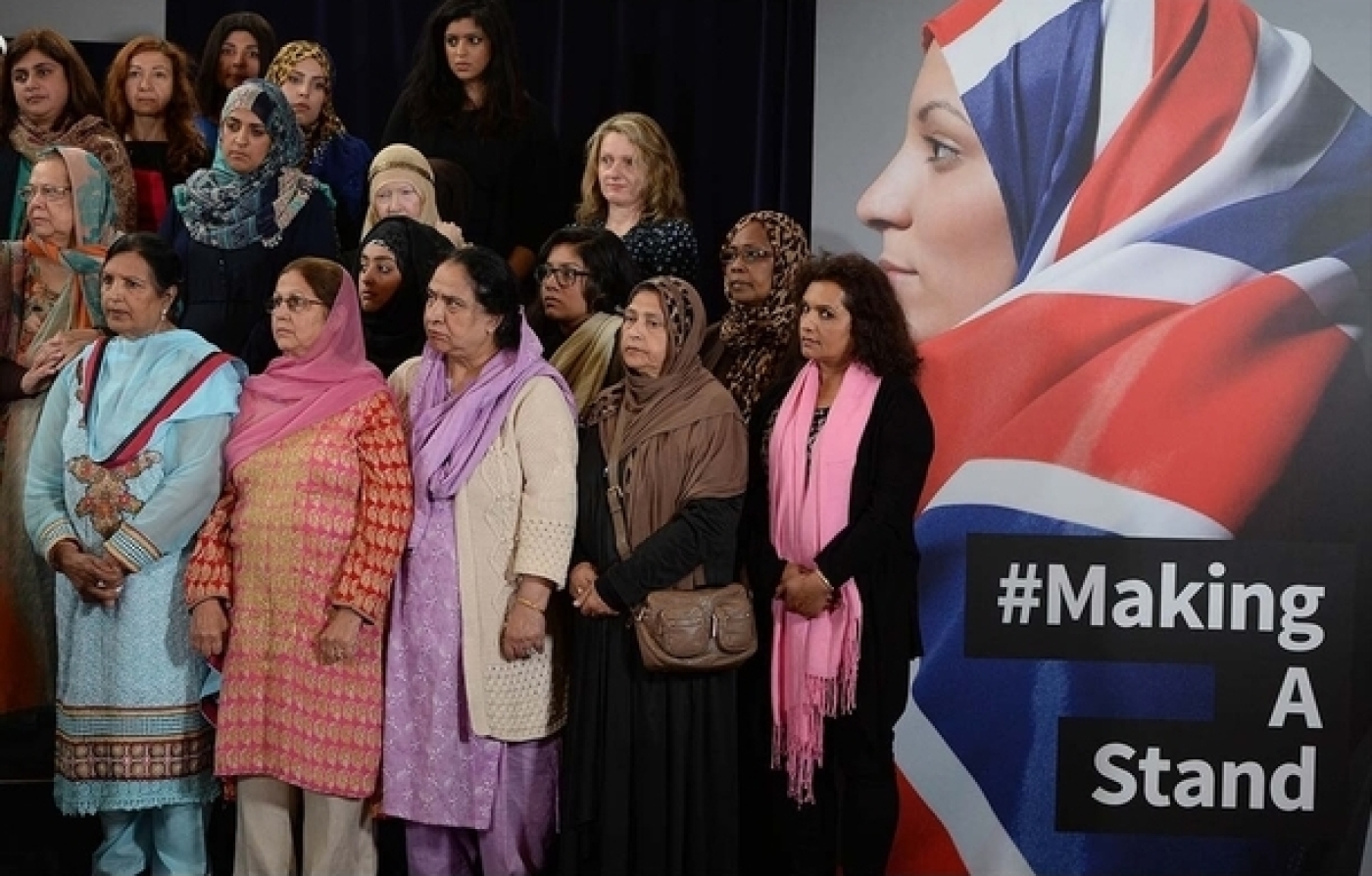 A high profile campaign encouraging Muslim women in the UK to “make a stand against terrorism” was covertly produced by the Home Office’s communications unit in order “to transmit counter-extremism messages into communities and hard to reach audiences”, Middle East Eye can exclusively reveal.

The #MakingAStand campaign was launched by Inspire, a women’s counter-extremism organisation, in September 2014, and described by Inspire founder Sara Khan as a “jihad against violence”.

On its website page dedicated to #MakingAStand, Inspire said that "women now felt empowered to stand up and say: 'No more. Enough is enough.'"

Home Secretary Theresa May attended a launch event in support of the campaign, but Inspire has always maintained that it is independent of government.

Earlier this year, Khan and Inspire co-director Kalsoom Bashir said in evidence submitted to a parliamentary inquiry into the government’s counter-extremism policy: “All decisions in relation to Inspire’s remit and work are made solely by the directors; all projects and activities are led and carried out by the Inspire team.”

But an internal government document seen by MEE lists #MakingAStand as a “RICU Product”, referring to the Research, Information and Communications Unit (RICU), the Home Office’s strategic communications unit responsible since 2011 for disseminating counter-extremism narratives as part of the government’s Prevent strategy.

The March 2015 document, produced by the Home Office-based Office for Security and Counter Extremism, is titled “Prevent Strategy: Local delivery best practice catalogue” and marked “Not for public discourse”.

It described the aim of the #MakingAStand campaign as being “to encourage British Muslim women to make a stand and take the lead to reject ISIL [the Islamic State group] propaganda and discourage travel to Syria/Iraq”.

It said the campaign was being led by "the civil society group Inspire" and was creating “a national network of British Muslim women across Prevent priority areas who will be able to transmit HMG [Her Majesty’s Government] counter-extremism messages into communities and hard-to-reach audiences including workplaces, community institutions, schools, higher education and mosques”.

The “target audience” of the project was “250,000 female Muslims aged 15-39 in 30 Prevent priority areas from Pakistani, Bangladeshi, Arab, and Somali backgrounds," while it lists resources required for the campaign as “access to women’s civil society groups”.

The document was included in evidence submitted last week to the Home Affairs Select Committee by David Miller, a professor of sociology at the University of Bath, and Narzanin Massoumi, a postdoctoral fellow at the University of Liverpool, who describe themselves as researchers “working on the issues of terrorism expertise, Islamophobia, Muslim civil society groups and government communications”.

They say that the document raises fresh questions about the independence of Inspire and Sara Khan, one of the UK’s most influential counter-extremism voices, following reports last month that RICU was running a “covert propaganda campaign” to project counter-extremism messages to British Muslims through ostensibly “grassroots” organisations.

“The document shows how several 'independent' organisations working in the area of counter-narratives have a close relationship with the Research Information and Communication Unit (RICU),” Miller and Massoumi write.

“The closeness of the relationship seems to undermine numerous public claims that these are independent, grassroots or voluntary organisations.”

Miller and Massoumi also reiterate concerns about a possible conflict of interest raised by Inspire's work with the Home Office where Sara Khan's sister, Sabin Khan, is the deputy head of RICU.

Inspire states on its #MakingAStand web page that the campaign was supported by the Home Office.

“We are thankful to the Home Office for supporting our #MakingAStand campaign. The funding received to deliver projects into communities has helped provide women with an opportunity to better understand how they can protect their children from radicalisation and extremism,” it said.

But Miller and Massoumi suggest that the paragraph was added to the page at some time in the period between 21 July 2015 and 23 November 2015 since it does not appear in archived versions of the page prior to the latter date.

“This potentially endangers the reputations of those Muslim women's groups they are working with. Muslim groups working with Inspire - as well as the public institutions and schools where they deliver training - have a right to know the full details of their relationship to RICU.”

Quizzed by the Home Affairs Select Committee on 17 November 2015, Khan denied that Inspire was well supported by the government or had “preferential provider status”.

“We are a voluntary organisation that depends on the goodwill of donors. When we set up Inspire, we had no funding, no salaries and no office - we continue to have no office,” she said.

“The only two full-time salaries you have are for the people sitting in front of you [Khan and Bashir]. If we were so well funded and supported by the government, we would have far more than we have."

Reports of government involvement in orchestrated “grassroots” counter-extremism campaigns have alarmed many within Muslim organisations amid widespread concerns that its Prevent strategy is discriminatory and ill-conceived, with sources telling MEE that the government is entering “dangerous territory” in attempting to shape a British Muslim identity.

“Inspire claims to be independent ring hollow in the light of the evidence that they have a secret relationship with RICU, the propaganda unit of the Home Office. Inspire, like others before them, have taken money from the government and effectively become an asset of the British state,” Miller told MEE.

The #MakingAStand campaign was also promoted by the Sun newspaper, which ran a front page in October 2014 urging Britons "of all faiths to unite to defeat IS fanatics" and featuring a front page photo of a woman wearing a union flag hijab.

"The lack of transparency by the government only serves to reiterate how utterly failed Prevent is as a strategy and the divisive role it plays amongst communities," he said.

Following the launch of #MakingAStand, Inspire ran counter-extremism roadshows aimed at Muslim women in cities around the UK. In a video posted at the conclusion of the campaign in May 2015, Khan said: "We have been going up and down the country engaging and empowering women to not only challenge extremism but to champion this work in their local area."

Yet despite the Home Office catalogue's claim that campaign videos had been viewed over 80,000 times online, most of the #MakingAStand-tagged videos on Inspire's YouTube channel had been viewed less than 50 times, with one video posted in the northern town of Burnley attracting just 23 views at the time of publication.

MEE asked Inspire to clarify details about RICU's role in producing #MakingAStand, about its relationship with, and funding from, the Home Office, and when it updated its web page to acknowledge that the project was supported by the Home Office.

In reply, Inspire told MEE in a statement it was proud of the campaign which it said had directly benefited hundreds of Muslim women across the country.

It also said that Sunday’s attack on a gay nightclub in Orlando, Florida, in which the gunman had reportedly claimed prior allegiance to IS, highlighted the urgency of counter-extremism work.

“As it states on our website and in evidence submitted to the Home Affairs Select Committee, our campaign was supported by the Home Office and we are grateful for their support. Having been approached by Muslim women fearful of their children possibly leaving the UK for ISIS [IS], we were motivated to help equip mothers to safeguard their children from radicalisation," the statement said.

“The horrific attack in Orlando further demonstrates the extent of the risks posed by radicalisation, extremism and terrorism internationally. As a non-governmental civil society organisation we believe the most effective way to deliver counter-violent extremism projects is to work together and in partnership; hence we have worked with Muslim communities, schools, police, NGOs and the government. We make no apologies for our work and we hope to continue to challenge extremism and champion human rights.”

Security Minister John Hayes told MEE: “Challenging hatred and extremism is a job for all of us and we continue to work in partnership with communities to challenge those who spread hatred and intolerance.

“Since 2014 RICU has provided Inspire with communications support on website build and media training to help them in their work countering extremism, and empowering women and families in safeguarding their children from radicalisation.

"We are very proud of the support RICU has provided to organisations working on the frontline to challenge the warped ideology of groups such as Daesh [IS], and to protect communities.”