The women of al-Aqsa: the compound's self-appointed guardians 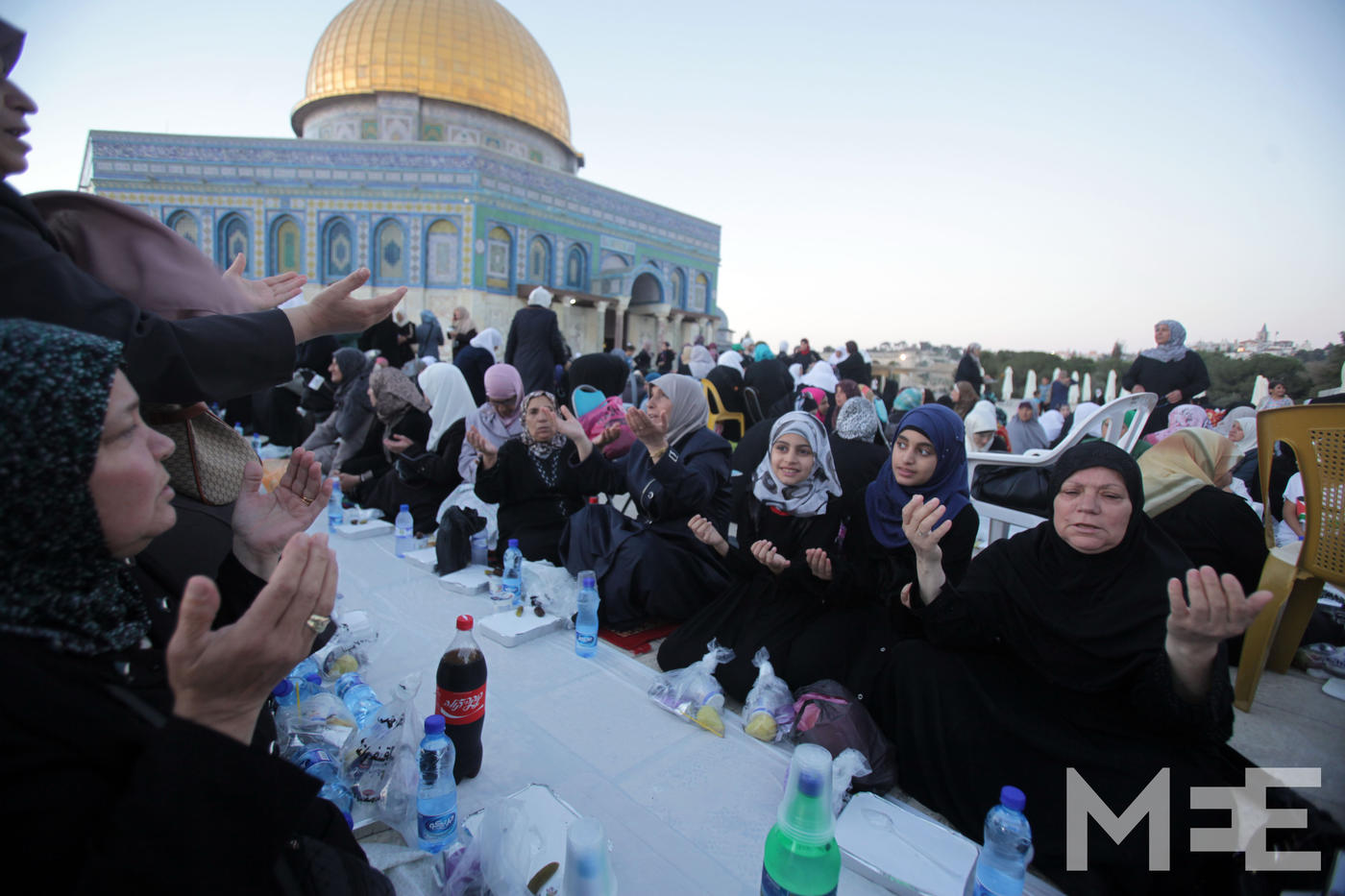 JERUSALEM: It’s a wet Monday morning, and about twenty women are gathered under the stone arches of al-Aqsa mosque, clustered on plastic chairs and carpets as they shelter from the torrential rain flooding the courtyard. They talk together and read out loud, as they bend over religious books. Before long they are joined by more women, who are all holding prayer mats and have come to huddle for shelter from the storm.

These women, aged from their early twenties to over seventy, come to Jerusalem’s most important Islamic site, the third holiest in the religion, every day. Under the arches of the mosque, or in the shady courtyards of the golden Dome of the Rock, they pray, meet and learn together. Older students, many of whom cannot read or write, are schooled in reading the Quran, while younger women consider more complex questions of religion, and learn the history of the mosque and the holy city.

But this isn’t the sole reason the group visits al-Aqsa. The women are known as the ‘Murabitat’ the steadfast, who have come here to defend the holy site from Israeli incursions and deepening control. They say they are keeping watch against groups of right-wing and religious Israelis who frequently tour the al-Aqsa complex and on occasion attempted to pray at al-Aqsa - which is known as Temple Mount to Jews and regarded as Judaism’s holiest site.

When a group of Israeli Jews pass by the mosque, escorted by police, the Murabitat women cry “Allahu Akbar” - God is Great - to remind the visitors that despite growing escalations and infringements, the compound is still in Muslim hands.

"We say ‘Allahu Akbar’ whenever anything bad happens to us, when we are threatened by the Israelis or hurt by the soldiers,” Latifa Abdullatif, 24, told Middle East Eye.

“I live in the Old City, and I used to come here just for the prayers at night time. But when I saw the settlers come every day, and saw how much they want to be here, that they want to have the Dome of the Rock destroyed, I realised that I have the right to come and that therefore I should come. [I come] to make a point: we will not leave this place, this place is ours, and we won’t go anywhere.”

Abdullatif’s conviction is shared by many Palestinians, who believe the status quo at al-Aqsa is gravely threatened. Officially, Jewish Israelis are currently allowed to visit the compound, which is administered by the Islamic Waqf, but not pray in it. In recent years and months, however, right-wingers have been challenging that arrangement with increasing force and frequency. By regularly visiting the compound Jewish settlers, including prominent names in the Knesset, say they’re asserting their religious rights to pray in Judaism’s holiest place.

Palestinians though, believe the groups are looking to take over the site entirely - a fear corroborated by organisations like the Temple Mount Movement, which explicitly states that the “pagan shrines” of al-Aqsa and the Dome of the Rock must be destroyed and replaced with a third Jewish temple. It’s this that’s fuelling much of the recent tension surrounding al-Aqsa, and many confrontations between the women of the mosque and police.

“Imagine if you are not allowed to go and pray at the church, it would be so hurtful, it would make you angry,” says Ayda Sidawil, 53, as she looks over the gardens of the compound, to the blue walls of the Dome of the Rock in the distance. Nearby, a group of soldiers shelter under a tree.

“I don’t care if my home was destroyed, or if they took my money. The Aqsa mosque is a red line. If they take al-Aqsa, the rest of Jerusalem won’t be okay either,” Sidawil adds.

One of the most iconic images to come out of the increasing turmoil surrounding right-wing visits to Haram al-Sharif, has been that of men barred from the mosque praying in the street, the rows of duplicated backs bowed in collective worship and protest. But this is only part of the story. The women who come to the mosque every day have also been arrested, beaten and banned from the mosque grounds. Yet, they continue to return and insist that they are prepared to continue to pay a heavy price just to be close to al-Aqsa.

New reports of women being arrested at the compound, or hurt by security forces, emerge every week; Abdullatif says she was detained for two hours earlier this month, interrogated, and threatened with expulsion from the mosque. Other women also say they’ve been repeatedly prevented from entering the mosque compound - an issue highlighted by Knesset Member, Haneen Zoabi – and film footage showing women being chased by police officers and being refused entry at its gates.

Police spokesperson Micky Rosenfeld denied that arrests had been made, or that a ban on women was ever imposed.

“Over the last few weeks there have been some disturbances on Temple Mount,” he told MEE.

“Women walk around on the Temple Mount, preventing tourists and other non-Muslims walking around on Temple Mount. Women sometimes shout ‘Allahu Akbar’ at visitors and police have responded to that.”

Tensions on both sides are high. Last month, Israeli Knesset Member, Moalem Rafaeli told the Jerusalem Post that he was pushed by a Palestinian woman as she attempted to visit al-Aqsa compound.

The women at the mosque, however, say violations continue and blame the authorities for the various flare ups.

Sidawil explains that she was recently beaten by security forces. She shows a photograph of her jilbab - a loose-fitting dress worn by Muslim women - which she says was ripped by soldiers during the incident.

Zoya Badawni, 67, is another woman who says she was roughed up, this time by settlers. She now wears a bandage around her wrist that was broken during the confrontation – a scar that Badawni insists is still hurting her. 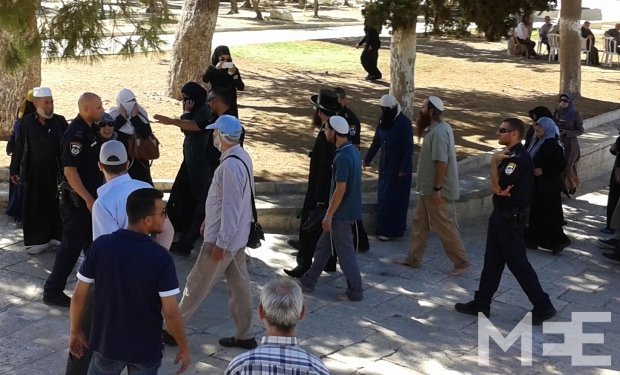 Sidawil recalls that: “last Wednesday, it was a very bad day.

Despite these challenges, however, the group says that they only grow more convinced of the need to stay at defend the mosque. Despite her injuries, Badawni is one of many that travel to al-Aqsa from inside Israel – areas like Jaffa, Acre or the Galilee – almost daily.

As women, the Murabitat believe they have an especially crucial role: Jerusalemite men, they say, are at greater risk of arrest in the exposed and heavily policed courtyard of al-Aqsa, and they feel women are less likely to be detained, or to lose control and resort to violence.

Indeed, the fact that the Mubaritat are struggling together as women is central to their approach, and many of the group think the struggle at al-Aqsa has challenged and transformed ideas about traditional roles. The movement, participants say, is something that’s evolved markedly in the last four or five years as the political imperative has encouraged those involved to challenge conservative ideas about gender.

“Before women didn’t really come to the mosque so much,” says Abdullatif, who’s one of the youngest members of the group.

“But since the conflict became more difficult, more extraordinary, they became free of these thoughts that the women should stay at home, that she shouldn’t say anything, shouldn’t raise her voice.

“It’s only the culture that makes people think these traditional things, because it’s certainly not based on religion,” Abdellatif continues. “Since coming to the mosque and doing these things, the women have got more open minded. They’ve understood that they should come, that they can travel, and that they can say what they’re thinking.”

For many of the women here, the al-Aqsa complex is the central point not just in Jerusalem, but also their lives. It’s the centre of community in the city that most have been visiting since they were children. But it’s more than that, too. The Mubaritat say that as long as al-Aqsa stays, so does Palestine. Their conviction to defend it has compelled them to challenge threats of violence, arrests and restrictions.

“I was arrested two weeks ago, and they took me for six hours and asked me questions. They said, if you go back to Al Aqsa you will be banned, we will put you in prison,” Abdullatif says. “The next day, I came back.”

“We know it deeply inside that we are putting ourselves at risk, but we have no other way. What do we have to express ourselves? None of us would love to be arrested, none of us would like to be beaten. But it’s the only way,” she adds. 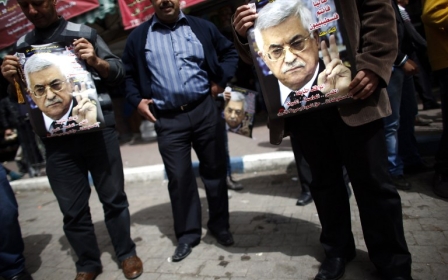 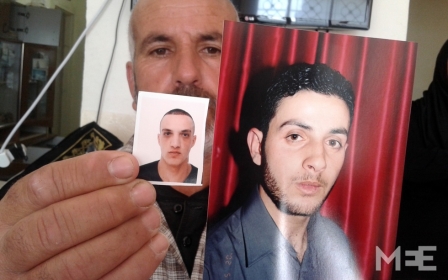