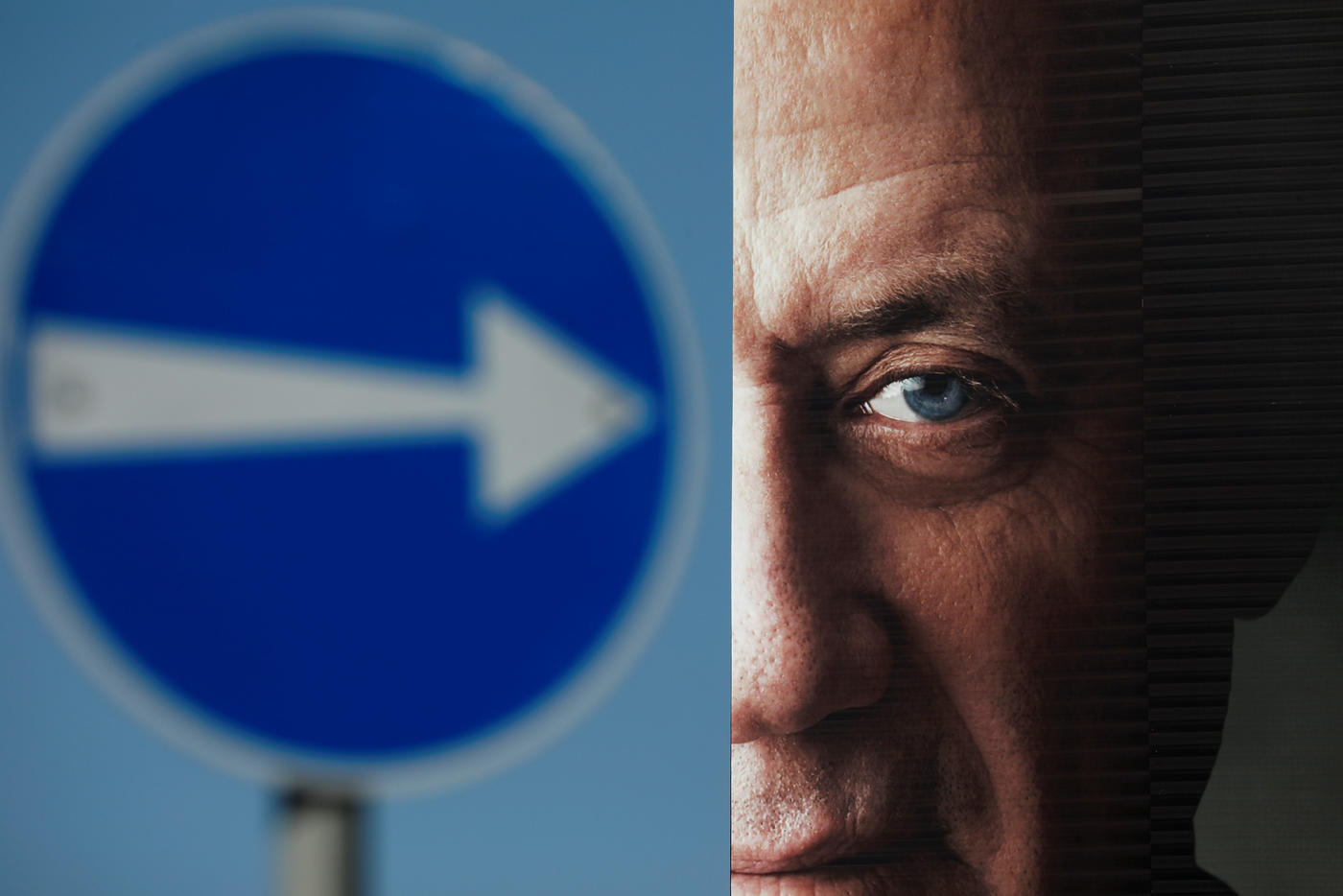 A part of a campaign billboard of Benny Gantz, a former Israeli armed forces chief and the head of a new political party, Israel Resilience, can be seen in Tel Aviv (Reuters)
Par
MEE staff

Gantz says he’s ‘not looking to rule over anyone’

Speaking to popular singer Shlomo Artzi, daily newspaper Yediot Ahronot’s guest celebrity interviewer, Gantz said that the evacuation of Israeli soldiers and settlers from the Gaza Strip in 2005 was well executed, and that it should serve as a model for the future.

“We are not looking to rule over anyone else. We must find the way in which we are not ruling over other people,” Gantz said.

“We need to take the lessons of the disengagement from the Gaza Strip and implement them in other places.”

Gantz’s party later clarified that “no unilateral decisions will be made on settlement evacuation” in the West Bank, which has been under Israeli military occupation for over half a century.

Earlier this week, Moshe Yaalon, a fellow former general and number two candidate on Gantz’s list, visited the illegal Jewish settlement of Leshem in the West Bank and expressed support for “utilising our rights to settle all of the parts of the land of Israel”.

Meanwhile, a third former Israeli army commander-turned-aspiring-politician, Gabi Ashkenazi, is trying to build a bridge between Israel Resilience and Yesh Atid, so that the two parties can compete for the Knesset on a single slate, a strategy he believes will help to oust the incumbent prime minister, Benjamin Netanyahu.

Prime Minister Benjamin Netanyahu and hard-right factions have been pushing the message this week that every effort should be made to unite the various far-right forces competing for seats in Israel’s parliament, including those consisting of acolytes of controversial rabbi Meir Kahane.

“Prime Minister Netanyahu calls upon the Jewish Home to act in order to unite with National Union and Israeli Strength to prevent the loss of seats for the right bloc, which could lead to the formation of a leftist government,” Netanyahu’s ruling Likud party said in a statement.

Israeli Strength is led by Michael Ben Ari, Bentzi Gopstein, Itamar Ben Gvir and Baruch Marzel – all followers of the late Kahane, a former member of the Israeli parliament who was banned from running again due to his incitement of hatred against Palestinians.

Netanyahu’s call for unity on the right were echoed by the Religious Front, a political group associated with Chabad, one of the largest Jewish sects in the world.

“We call upon all the ultra-Orthodox and religious parties at this time, before lists have been submitted, to unite on one slate,” read a petition being circulated by the group and published in the news site Jewish Voice.

No charges against whistleblowing Breaking the Silence

Three years after the government began investigating NGO Breaking the Silence over allegations that it had illegally collected and stored information considered classified by the military, Attorney-General Avichai Mandelblit announced that he would not be pressing charges against the group or its members, Haaretz reported.

The story first broke in 2016, when Israel’s Channel 2 news aired an investigation into the group of whistleblowing ex-Israeli soldiers.

The investigation was based on video footage collected by right-wing activists who had infiltrated the group, which opposes Israel’s occupation of the territories it conquered in 1967.

After the allegations were aired, Moshe Yaalon, at that time the defence minister, quipped that the activities of the group amounted to treason.

A year later, in February 2017, the government informed the right-wing activists that it would not pursue any legal charges against Breaking the Silence. It would take another two years, however, for Israel’s attorney-general to sign off on that decision and pass it on to the group itself.

“The settlers’ organisations have lied to the press, to the prosecution, to the public and to all of us. Those trying to label soldiers who break the silence as traitors, spies and foreign agents have failed again,” Gvaryahu said.

Prime Minister Benjamin Netanyahu has ordered the archives of Israeli intelligence organisations, which were scheduled to be made available to the general public this year, to instead remain sealed for another 20 years at least, Haaretz reported.

The decision will affect Mossad and Shin Bet – Israel’s external and internal intelligence organisations – as well as units linked to atomic energy and biological research.

As a result, documents which would have been made accessible this year, relating to the period in which Israel was established, and in which hundreds of thousands of Palestinians were dispossessed, will not be available after all.

The new protocol contradicts the wishes of the state archives’ advisory council, which has recommended keeping only some of the documents under lock, and even then, only for another five-year period.

Israeli Archivist Association chair David Amitai called the decision “absurd”, however, suggesting that delaying the release of the files by another two decades was an effort to airbrush Israel’s history.

“Yes, they’re not pleasant. Yes, they could cause all kinds of scandals, but they won’t harm national security,” Amitai told Haaretz.