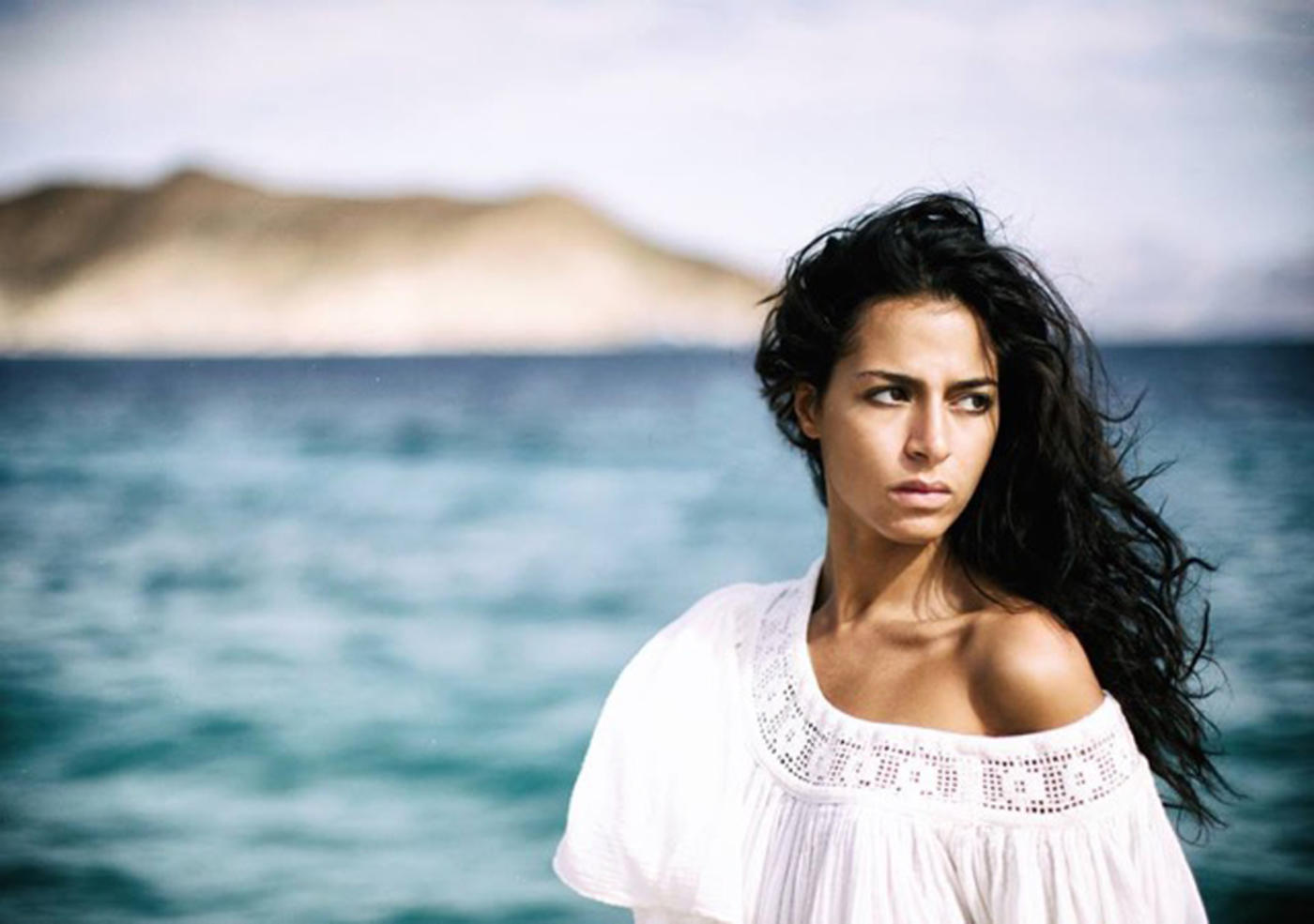 LONDON - Ouidad Elma finds herself strangely homeless. A hectic acting schedule has taken her from Paris to London, and before that South Africa to film the new BBC colonial drama The Last Post.

“Actually I don’t have a base, I’m like free-floating,” said the actor, who was born in Morocco and grew up in Paris before returning to her country of birth six years ago to make films. “I lived two and half years in Morocco, then I lived in Brussels, now I am staying in London.”

She is in London, among other reasons, for a preview of the end-of-empire drama series The Last Post - watching herself in it was both exciting and weird, she said.

Elma plays a young Yemeni caught between loyalty to her country as it wages a liberation struggle against British colonialism, and her illicit love for a young British soldier.

The series is based on writer Peter Moffat’s experience as a child of a British officer in Yemen in the years before the UK withdrawal in 1967 and the first episode goes out on BBC1 on 1 October.

“The Yemeni protagonists want to recuperate – to take back their country,” Elma puts on a slightly over the top voice in a nod to Britain’s recent EU Brexit vote. “So my character is a young Yemeni girl and she is working as a nanny for this big British general and she is falling in love with a young British soldier, Tom (Glynn-Carney) and it’s forbidden. You are living in the country and you can’t fall in love with the enemy.”

It is like Romeo and Juliet across the colonial divide, she said. “We can’t have the space to blossom this love because everything is undercover. It is completely forbidden.”

Although the series focuses mainly on the lives of the British soldiers and women in Yemen in the last years of empire, The Last Post also "addresses the question of the legitimacy of colonialism and what the British were doing there," explained Elma.

“It was during the process of independence when NLF fighters wanted to push out the British. It was an important period in the Arab world when the Egyptian president [Nasser] was like a leader for all Arab countries and he was talking a lot about pan-Arabism.”

The series was shot in Cape Town, South Africa, where she spent several months between late 2016 and March 2017. With a war in Yemen, again backed by the UK as a leading arms supplier to the Saudi military campaign, the series has special resonance now, Elma said.

We have in the world millions of Arab women [that] are living really good lives and they have beautiful work, and they are leaders, lawyers, doctors, artists, painters

Elma's attraction to serious drama, such as the films she made in Morocco earlier in the decade, does not exclude lighter, entertainment projects. This summer, she was in Paris for her first comedy feature, Enchantees, directed by Saphia Azzedine and Francois Regis Jeanne, in which she plays one of three sisters brought together after the death of their philandering father.

“It was like a challenge. The rhythm, the improvisation, the precision…. My brain was really struggling for ideas to make your scenes work. It was completely different," she said.

Elma has recently joined the books of BAFTA award-winning casting agent Nina Gold, known for her work on mega series and blockbusters including Game of Thrones, and Star Wars: The Force Awakens, and UK dramas such as Wolf Hall and Taboo. A fan of sci-fi and fantasy - ever since she read Oscar Wilde's Picture of Dorian Gray as a child - Elma is definitely up for a part in something "magical," she said.

Elma was born in the Rif region of Morocco but brought to Paris as a baby when her parents moved to France. “I just had 40 days there, but my first breath was in Morocco. So it’s something important.”

Life for Elma's Moroccon family was difficult in Paris in the beginning. After spending years sharing a single bedroom with her four siblings and her parents, her father eventually found a large home for the family with rooms for each of them. “We couldn’t handle being separated – we wanted to be together in the same room like before,” she laughs.

She grew up in the multi-ethnic neighbourhoods of Belleville and Menilmontant in Paris, an area she still loves. Rather than her background being any kind of hindrance to her career, she calls it a blessing.

"To be born in Morocco and grow up in France is a real treasure for me. I really love my two countries - you can't choose between your mother and your father. And I think it's a very positive thing for me to have these two visions - European and African - in my work."

Yet she admits to some frustration at the kind of roles she is offered as a female Arab actor. "These things get to me; just always casting an Arab woman struggling with her hard situation, always playing like a sister or girlfriend of a dealer, sister of a terrorist or a woman going to be raped. Come on guys. We can play singers, presidents, I don’t know - a spy!.

Acting is something not really stable. And they [my parents] came from a hard situation so they need to see me in a secure zone. I just prefer risk

“We have in the world millions of Arab women [that] are living really good lives and they have beautiful work, and they are leaders, lawyers, doctors, artists, painters and they are so amazing and brilliant. Why don’t you want to talk about them? It’s like a lack of curiosity," she added.

As a teenager, she joined a theatre group, Les Enfant Terrible, and was soon spotted by an agent. At 16 she was cast in her first film Sa raison d'être – which charted the arrival of the AIDS epidemic in France in the 1980s. "I was just working and working a lot. You have to persevere if you want to do what you want, and focus on your work."

But her parents had different ideas for her future. “I was in a troupe of theatre, and my father told me: what are you doing – medicine or law? So I chose law. I understand them. Acting is something not really stable. And they came from a hard situation so they need to see me in a secure zone. I just prefer risk.”

However, law and the elitist culture she encountered at university was not for her - she describes the snobbery and prejudice toward non-white, working-class students like her as the worst she had experienced in her life, but does not want to elaborate. She never practised law and has never looked back.

When MEE meets Elma, she had just finished shooting a short independent film, Drum, in which she plays a refugee on the run in London with two young children. It was shot with a volunteer crew of veteran filmmakers, including I Daniel Blake cinematographer Robbie Ryan. She says she was blown away by the script and the subject matter, which for her is also personal.

Amali nd me on the set of The Drum 🥁directed by Hayley Williams !Such a wonderful day #mumanddaughter #film #tomgardner #robbieryan pic.twitter.com/6R3glOrS8A

“For me it is about freedom, it is about how people can survive in this situation. It’s really interesting how the director Hayley [Williams] shows the tension of being a refugee in this situation, how to survive, how to be, and the connection between her and her daughter. I found some universality, of how people in 2017 can live in a bad situation in a country like the UK or France. For me it’s unacceptable.”

Why do France and the UK have all these restrictions, while they can go everywhere they want but when you are Moroccan you can’t? I hate borders

In her research for her character in Drum, she spoke to Syrians in the UK and France and refugee groups. “For me they are like a hostage, you are not living, you are hiding, running, waiting. It’s always tension. So this tension had to manifest in attitude and physical expression, how you walk, so I work on this tension in my character.”

As a dual French-Moroccan passport holder, the actor has an acute sense of the difference a European passport makes compared to her Moroccan compatriots. She lost an uncle who died trying to cross the Mediterranean from Libya into Europe several years ago. “He was waiting for a visa. But this f***ing visa took too much time. And you ask why people do this."

She feels there is a fundamental inequality in the way western passports enable the holder to travel freely, while those from developing countries cannot. “Why do France and the UK have all these restrictions, while they can go everywhere they want but when you are Moroccan you can’t? I hate borders."

"It’s like discrimination. If borders were more open I think the flow of people would regulate itself. The problem would resolve itself. We’ve never tried it. We just can open the borders and we will see. Because now it is completely catastrophic. It’s a disaster, all these people dying in the sea, all this imbalance," she added.

Her next project in France is with Philippe Faucon, the Cezar-winning director of 2015’s Fatima, who cast her in a new film as the daughter of an older Moroccan man struggling to survive in France’s black economy.

“It’s always interesting to work with this kind of director, who has a strong vision about making socially engaged projects.

“I really like working on this kind of drama because I think we have some big responsibilities, in your choice, in what you want to say," she said. "I’m not just an entertainer. If I can change - or if the film can change - one person’s vision of who we are and the richness of our heritage, it is already huge.”