Israel's inside man: How John Bolton sabotaged US foreign policy in Israel's favour

Richard Silverstein
With an ally like John Bolton at the heart of the Trump administration, Israel will never see any criticism or policy it views as inimical to its interests 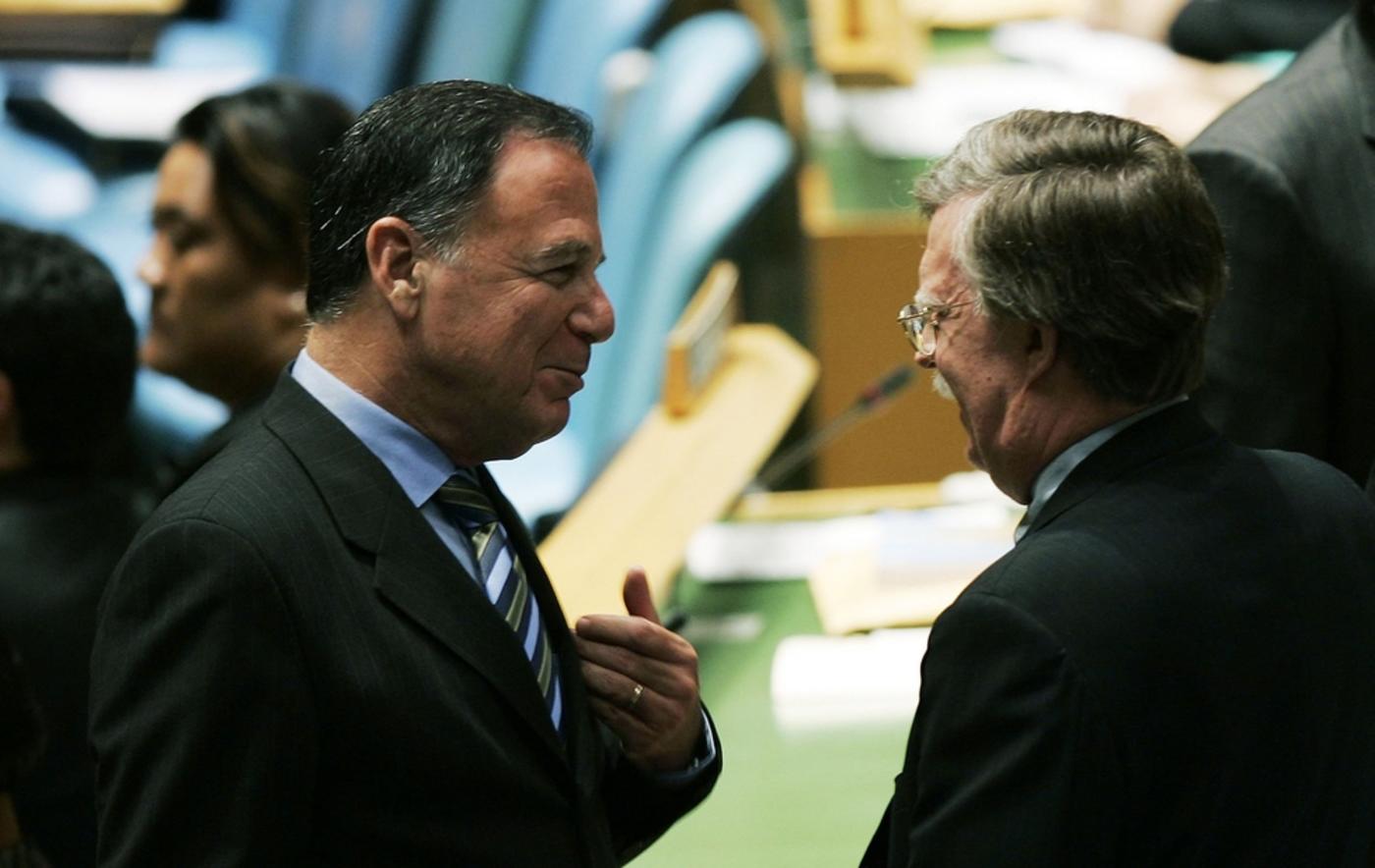 He served as US ambassador to the United Nations for more than a year, but was forced to abandon the post when he failed to secure Senate confirmation.

In recent days, Israel's then UN ambassador, Danny Gilerman, gave an interview to Israeli Army Radio (Hebrew interview) in which he discussed the close relationship he enjoyed with Bolton during their work together at the world body. Their collaboration was beyond "close".

Bolton actually sabotaged the official foreign policy objectives of then-secretary of state Condoleezza Rice. Gilerman recounts that whenever Bolton discovered a policy initiative he deemed "anti-Israel" the latter hastened to warn him. He directed Gilerman to call then-prime minister Ehud Olmert to telephone President Bush and kill the policy before it could be implemented.

In Gilerman's military metaphor, Bolton was so fervent in his support for Israel that he "called down fire on his own forces". In other words, Bolton was willing to kill his own to advance Israel's interests.

Like the Israeli Prime Minister Benjamin Netanyahu, Bolton will be more than content with the status quo, which offers Israel free reign to build settlements and maintain the Occupation

In one instance, Gilerman was working with Bolton to arrange a ceasefire at the close of the 2006 Lebanon war. Gilerman told the interviewer that both him and Bolton worked together to move forward Resoultion 1701 that ultimately brought about the ceasefire in that war.

"The US supported us and I worked very closely with Bolton. The French supported Lebanon," said Gilerman. He added:

"That night, before the American envoy was to arrive the next morning to present the prime minister with the draft resolution to be accepted by the Security Council, John Bolton phones me at something like three in the morning Israel time - I was in New York, so it was about 8:00 in the evening in New York - and he says 'I must see you'. He comes to my house so that it wouldn't be in my office or his, and he says 'Listen, Condoleezza Rice has sold you to the French. Meaning, she agreed to the French proposal that was approved by the Lebanese, and the draft that the prime minister is going to see tomorrow morning isn't the draft we're going to vote on, and it's very bad for you.'

"I did awaken the prime minister, and because of this he convened a meeting. Yes, he did receive the incorrect draft - it turned out that the correct version was ready and Condoleezza Rice was already on the way to New York to promote it. In great measure because of this - and I think then prime minister Olmert also says this - the prime minister asked for an extension of an additional 48 hours to solidify Israel's position, to prevent passing a very deleterious resolution to Israel from being ratified. It was very, very negative for us - ultimately it led to a resolution that brought an end of the war and quiet in the north."

It's hard to verify the accuracy of this account since it's offered only from the perspective of an Israeli diplomat. We don't have Secretary Rice's account or any US account. But we don't really need a fully balanced account in order to understand that what Bolton did was to thoroughly undercut the work of his own boss, the secretary of state.

Some would call it insubordination, a trait Bolton is known for. But it actually goes far beyond that. Bolton, in effect, had become an Israeli asset. Note as well, that Gilerman makes clear that Bolton travelled to the Israeli diplomat's home so that neither his US staff or Gilerman's could document his perfidy.

In a separate event, former Israeli defence minister, Shaul Mofaz, spoke on a national security panel in which he revealed that Bolton had pressured him to attack Iran: "I have known John Bolton ever since he was the US ambassador to the UN, he tried to convince me that Israel should strike Iran."

Speaking on a panel of four former Israeli military chiefs, Mofaz noted that he thought this was a bad idea. "I don't think this is a wise action – not on the part of the Americans but [neither] anyone else, until this threat becomes real."

Bolton knew that George Bush had refused Ehud Olmert’s request that America attack Iran, or jointly attack that country with Israel. So the UN ambassador turned to the defence minister and urged him to do it. He didn’t ask his superiors whether it was in US interests for Israel to start a war with Iran. He just did it.

At the time, Bolton had the support of Dick Cheney. So he could do no wrong. But now, as national security advisor, Bolton will be shaping US policy in areas that are of profound concern to Israel. In fact, Gilerman says in the interview that Bolton's new job is a "gift for Israel".

Indeed, it is. With an ally like this at the heart of the Trump administration, Israel will never see any criticism or policy it views as inimical to its interests. This, of course, will not be in the American national interest, since it will not advance peace in the region. Just the opposite.

The type of Islamophobia espoused by Bolton and Trump is selective: Shiites are the "bad" Muslims.  And Sunni Muslims like those in Saudi Arabia and the Gulf states are the "good Muslims"

For example, Bolton is expected to secure the president’s blessing to cancel the Iran nuclear deal. In addition, he will no doubt take a key role in developing policy toward Israel-Palestine.

Though there have been strong rumours that a Kushner peace plan will be presented in the near future, the president's son-in-law has been buffeted by multiple scandals, including the loss of access to top secret government material and documents. My sense is that the peace proposal he was developing, which was controversial in its own right, is dead in the water.

Now Bolton, who has never shied away from turf battles, will doubtless want to put his mark on this critical area of US foreign policy. Bolton has nothing but disdain for the Palestinians. Therefore, he will likely not want any peace initiatives - either Kushner's or anyone else's.

Like Israeli Prime Minister Benjamin Netanyahu, Bolton will be more than content with the status quo, which offers Israel free reign to build settlements and maintain the occupation.

Bolton is an avid Islamophobe who has spoken before conferences hosted by Pamela Geller and Robert Spencer, who are listed by the Southern Poverty Law Center as leaders of hate groups.

In his new role, his hatred of Islam will probably target Shia-led states like Iran and Syria. In the past, he has advocated not just regime change in Iran, but a nuclear attack on its research facilities. This is a position both Israel and Saudi Arabia have long advocated and two US presidents have opposed. Expect extraordinary pressure to set the US on the path to war.

Trump and Tehran: This is not 2003 and Iran is not Iraq
Seyed Mohammad Marandi
Lire

The type of Islamophobia espoused by Bolton and Trump is selective. The Shia are the "bad" Muslims while Sunni Muslims, like those in Saudi Arabia and the Gulf states, are the "good Muslims".

This may be the ultimate hypocrisy, but it is the new normal in a Washington DC in which John Bolton reigns supreme.