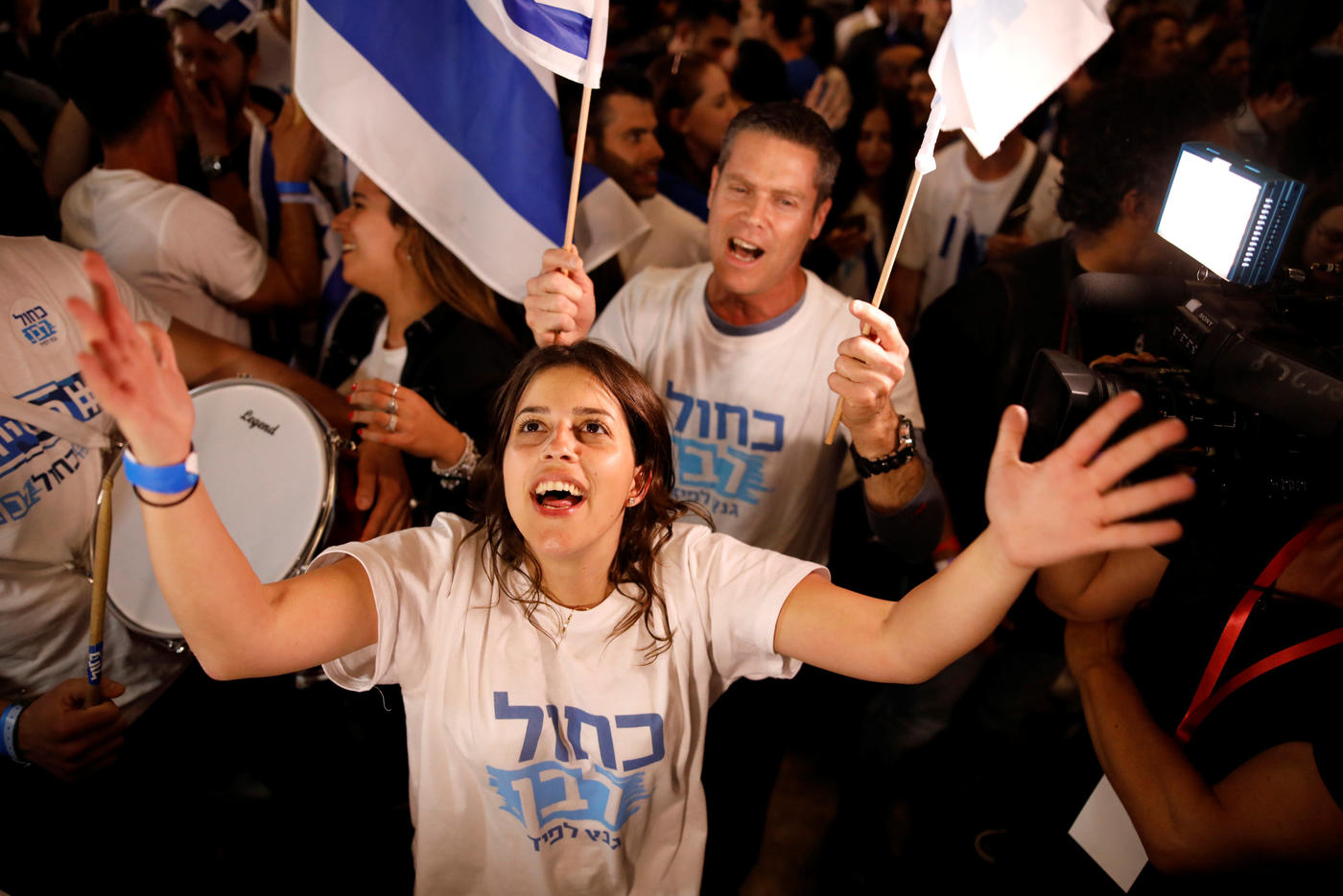 The most recent exit polls show that the right-wing bloc is slated to get between 63-65 seats, a slight majority in the 120-member Knesset, Haaretz reported on Tuesday.

'I hope he loses': Bernie on Bibi
3 years ago

US senator and presidential candidate Bernie Sanders had some harsh words for Benjamin Netanyahu on Tuesday.

"When election time comes in Israel, he always tries going even further to the right by appealing to racism within Israel, I think it's unfortunate," Sanders said at a campaign rally for the Vermont senator.

"I'm not a great fan of his, and, frankly, I hope he loses his election," he added.

'It was very intense for me'
3 years ago

Osnat Mark, a new Likud candidate, looks like she's made the grade.

At the Likud HQ in Tel Aviv, she tells MEE: "I'm only 35th on the list of candidates, so I didn't think I had a realistic chance of getting a seat.

"But the hard work proved its worth, and in the end we will build a right-wing government with our natural partners."

Jubliation in Blue and White headquarters
3 years ago

There is a victorious atmosphere in the Blue and White headquarters in Tel Aviv, MEE's Noa Borstein reports.

One of the party's candidates, Gady Yavrkan, is confident Gantz can form a government.

"We had an extraordinary feeling. Even the polls didn't predict these numbers," he tells MEE.

"I don't believe the bullshit that we won't be able to form a government. The will of the voters is the one making the decision."

Elsewhere, Tsion, a Blue and White supporter, says his work paid off.

"We worked so hard and we believed it was fate that we would win," he says. "The three generals will give Bibi a good fight."

As MEE previously reported, women have been shockingly absent in this year's election campaigns.

National broadcaster Kan is now predicting that the number of female members of the Knesset will drop to 29 from 36. There are 120 seats in the Knesset.

“We have a lot more work to do,” Yifat Bitton, a candidate running for the Knesset with the Gesher party, told Middle East Eye. “The men clatter about in the mud of ego, and the discourse is all about who is ‘strong’ and ‘weak’.”

For more on the absence of women in this year's elections, take a look at this piece: Something is missing in the Israeli election: Women

Another term for Netanyahu?
3 years ago

He hoped to be Israel’s longest-serving prime minister. Now that dream looks like it could become a reality.

Read Middle East Eye's profile of the man who has defined recent Israeli history: Benjamin Netanyahu: Israel's great survivor on the verge of another escape act

"The Likud-led right bloc won a definite victory. I thank the citizens of Israel for their trust. I will start by assembling a right-wing government with our natural partners tonight," he tweeted.

Small parties in trouble
3 years ago

Several of the smaller parties look like they're in deep trouble.

So too is Zehut, the Jewish-nationalist party vowing to legalise cannabis.

Raam-Balad, which represents Palestinian citizens of Israel, appears to be feeling the effects of a call for Arabs to boycott the election.

Meanwhile Gesher, the only party with half its candidates women, look like they've missed out too.

Benny Gantz's party is claiming victory. Another poll by Channel 12 is saying Likud got 32.

However, national broadacster Kan is predicting Blue and White struggling to form a coalition.

Benny Gantz's Blue and White party comes first, with 37. Neanyahu's Likud is just behind with 36, according to Kan's exit poll.

Bennet and Shaked might not get in
3 years ago

If Naftali Bennett and Ayalet Shaked's new party doesn't get over the threshold would be a huge huge shock https://t.co/hBZynF5xlH

One hour of voting left to go!
3 years ago

It's 9pm in Israel. That means it's just an hour until voting ends and the exit poll is released!

To bring in the final hour, here's a selection of tweets:

Literally every single party is now screaming on every mode of communication with exception perhaps of interperative dance that the turnout in its core constituencies is wayyyyyy! down#IsraElex19

Welcome to Israeli elections where advocating war crimes gets you votes!

I could never hear or read the word Gevalt again and it would be fine at this point.

“I’m not voting for Gantz,” one Israeli tells me outside a polling station. “I’m voting anti-Bibi” pic.twitter.com/8PZ76Vth1S

Mosques use loudspeakers to urge Palestinian Israelis to head to polls: Report
3 years ago

Concerned with low turnouts, mosques in Tamra and Taibeh are using their loudspeakers to urge Palestinian Israeli voters to go to the polls, Haaretz reported.

"This is an emergency situation. There is a real danger of a Knesset without Arabs and without the Hadash-Ta'al slate," said Hadash Chairman Ayman Adeh in a Facebook video.

"We are very worried by the voting percentage and now we're under pressure because the right-wing people are voting for the smaller parties on the right," he said.

Likud wants at least some of the vote to go to its smaller allies on the right. If a few of them don't make the 3.25 percent threshold to enter the Knesset, Netanyahu could struggle to form a coalition.

However, if Gantz's Blue and White has clearly beaten Likud, then he's far more likely to be given first crack at forming a government.

Bear in mind this information is coming from Likud's public relations office, however, and the panic could just be an electoral tactic. Time will tell.

From polling box to sandy beach
3 years ago

Polling day is a day off in Israel, so voting is pretty leisurely. When Israelis aren't voting, many of them are on the beach. Lots of dog walking too. Israeli Elections
Something is missing in the Israeli election: Women