The bomb exploded as the Syrian fighters conducted a search after sweeping into the town with Turkish forces, declaring full control on Sunday. Anadolu said the bomb had been planted by "terrorists".

'Our work is not finished...but terrorism is finished in Afrin'

After an eight-week campaign to drive out pro-Kurdish People's Protection Units (YPG), Turkish-led forces pushed into Afrin apparently unopposed, taking up positions across the city.

President Recep Tayyip Erdogan announced that Turkish-backed fighters had taken control of the city centre and said a "large number" of Kurdish fighters had "fled with their tails between their legs".

The Turkish leader has said the operation could move on to other Kurdish-controlled areas of northern Syria.

"Our work is not finished...but terrorism is finished in Afrin," Turkish government spokesman Bekir Bozdag said.

AFP correspondents reported seeing Turkish forces and their Syrian allies all across Afrin after the lightning advance.

Rebels fanned out across the city, giving victory signs and taking pictures with Turkish tanks parked outside official buildings.

But celebrations soon turned to retribution and looting as pro-Ankara rebels pillaged goods and a statue of a Kurdish hero was torn down.

Fighters were seen breaking into shops, restaurants and houses, before hauling off foodstuff, electronic equipment, blankets and other goods in trucks.

Villages around Afrin had been subject to robberies with agricultural machinery and tools seized, sources told the Syrian Observatory for Human Rights (SOHR), a British-based war monitor said.

The first British female fighter was killed fighting alongside the pro-Kurdish People's Protection Units (YPG) in Afrin, it has been reported.

Anna Campbell, from Lewes in East Sussex, was killed in Afrin on 16 March after her convoy was struck by a Turkish missile, according to the Guardian.

As Turkey and its allied forces arrived to cement control over Afrin, civilians continued to flee the city.

Around 250,000 civilians left in recent days after pro-Ankara fighters took the surrounding region and all but encircled the city, fleeing southwards to territory still held by the YPG or controlled by the Syrian government.

On Sunday, 13 pro-Turk fighters were killed by landmines during search operations in Afrin, the SOHR said.

Residents said it appeared that YPG units had withdrawn from the city without a fight. But Kurdish authorities vowed to retake Afrin, one of three semi-autonomous Kurdish "cantons" in northern Syria.

"Resistance...will continue until every inch of Afrin is liberated," authorities representing the Afrin canton said in a statement.

"In all of Afrin's sectors, our forces will become a permanent nightmare" for pro-Ankara fighters, the statement said, promising "a switch from direct confrontation to hit-and-run attacks."

More than 280 civilians have been killed since the campaign began on 20 January, according to SOHR.

Ankara has denied the reports and said it takes the "utmost care" to avoid civilian casualties.

More than 1,500 Kurdish fighters have been killed since the start of the offensive, most of them in air strikes and artillery fire, SOHR reported.

More than 400 pro-Ankara rebels have also been killed, it said. The Turkish military says 46 Turkish soldiers have died.

But the Kurdish militia has also formed the backbone of a US-backed alliance that successfully expelled the Islamic State militant group from large parts of Syria. 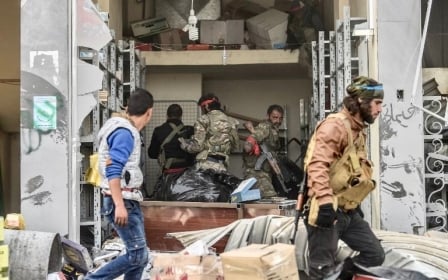 Turkey At War
Erdogan: Afrin town should be in our hands by this evening