Ambulances arrive at the site after an explosion took place in Beyazit district of Istanbul, Turkey on 7 June, 2016 (AA)
By
MEE and agencies

A bomb ripped through a central Istanbul district on Tuesday, killing 11 people, including seven police officers and four civilians.

The blast targeted a service shuttle bus carrying officers from Istanbul's anti-riot police as it was passing through the central Beyazit district close to many of the city's top tourist sites, Istanbul governor Vasip Sahin said in a live statement on Turkish television.

Thirty six people were wounded, three of them seriously, he added. Gunshots were heard after the explosion, Turkish Anadolu Agency said.

Ambulances and fire engines were dispatched to the scene.

Turkish President Recep Tayyip Erdogan hinted that the attack was carried out by members of the Kurdistan Workers Party (PKK). Four suspects have now been arrested in connection with the blast and are believed to have rented the car that was rigged with explosives, local media said.

They are believed to have been involved in renting the car that was rigged with explosives.

For the PKK to target major cities such as Istanbul "is nothing new," Erdogan said after visiting the injured at an Istanbul hospital.

Reports said the explosion took place close to the Vezeciler metro station, which is within walking distance of some of the main sights of the historical centre including the Suleymaniye Mosque.

Pictures showed that nearby shops had their front windows smashed out by the force of the blast.

MEE contributor Suraj Sharma, reporting from Istanbul, said that security has been beefed up all along Istanbul's metro network following the blast.

"Every single bag is being checked and the Vezneciler station itself has been closed," he said.

An Anadolu Agency reporter at the scene said that a controlled explosion was to be carried out on a suspicious object in the area.

While police have sealed off the area to the public and the media, large crowd of onlookers remains.

Since the start of the year, Turkey has been hit by a sequence of attacks that have rattled citizens and also caused tourism to plummet.

Following the blast, #KürtlerKatledilsin (Massacre Kurds) began trending on Twitter, and many took to the social media site to express their anger at possible Kurdidsh militant responsibility for the attack:

Two separate blasts in Ankara claimed by the Kurdistan Freedom Falcons (TAK) - an alleged splinter group of the PKK - earlier this year claimed dozens of lives.

Last month, at least eight people including soldiers were wounded by a remotely detonated car bomb aimed at a military vehicle in Istanbul that was claimed by the PKK.

Meanwhile, a dozen German tourists were killed on 12 January in a bombing in the heart of Istanbul's tourist district blamed on Islamic State (IS) militants.

At least three Israelis and an Iranian were killed in a 19 March bombing on Istanbul's main Istiklal shopping street which was also blamed on IS. The attacks have also come as Turkey is battling PKK militants, who have themselves killed hundreds of members of the security forces in the southeast.

The government has warned there will be no let up in the fight until the PKK is defeated and the militants have in turn threatened more attacks.

But the attacks in Turkey's heartland have had a dire effect on the tourism industry and further violence in Istanbul comes at the worst possible time heading into the key summer season.

Some 1.75 million foreigners came to Turkey in April, down more than 28 percent on April 2015, the tourism ministry said in its latest release.

The fall was the steepest monthly decrease for 17 years and raised fresh concerns about the health of the industry heading into the crucial summer season.

The US embassy in Turkey in April warned of "credible threats" to tourist areas in Istanbul and the resort city of Antalya, in particular to public squares and docks.

Turkey, a member of NATO and the US-led anti-IS coalition, appears to have stepped up its operations against Islamic State in northern Syria, where the militants control areas near the border, which some analysts say has made it more vulnerable to attack. 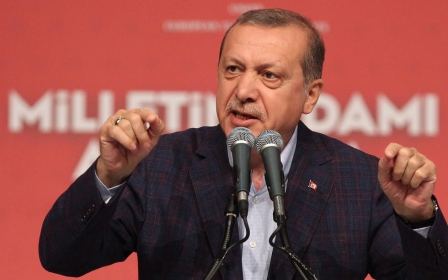