After Turkey-Russia deal, what’s next for Syria’s Idlib? Displaced Syrian children behind a fence outside their tents in a camp near the village of Kafr Lusin, in Idlib's northern countryside near the Syria-Turkey border, on 22 October 2019 (AFP)
By
Elizabeth Hagedorn

With the world’s attention fixed on Syria’s embattled northeast, a looming government offensive on northwestern Idlib province puts in the crosshairs some three million civilians living in the country’s last rebel holdout.

The deal calls for Ankara to maintain the areas it has captured in recent weeks, while giving Russian and Syrian government troops control of the rest of the border.

Although opposition-held Idlib province wasn’t mentioned in the 10-point memorandum signed by the two leaders, experts say it’s likely an understanding was reached in private.

“There is a sense - although no one can really prove it - that the deal was [President Bashar] Assad gets Idlib, the Kurds get to stay in the northeast,” said Jasmine El-Gamal, senior fellow at the Atlantic Council and former Syria advisor at the US Department of Defense.

“Turkey gets its safe corridor, and Russia gets to say that it is the main lever of influence in the Middle East,” said El-Gamal.

Eight years into the war, Idlib province remains the only part of Syria that is held by the opposition trying to overthrow Assad.

As other opposition cities have fallen to the government, Idlib has become a last redoubt for rebel fighters and displaced civilians from Ghouta, Aleppo and other former opposition strongholds. The province’s pre-war population of 1.5 million has nearly doubled since 2012.

'Whenever something happens on the Turkish front, Russia and the regime remind Turkey of its duty in Idlib'

“We might see the resumption of regime attacks in Idlib, and that might be what Turkey agreed to behind closed doors,” said Tol.

Idlib and the surrounding area host a number of rival opposition factions including Turkey-backed rebels and the dominant Hayat Tahrir al-Sham militant group, which is led by Syria’s former al-Qaeda affiliate.

On the pretext that it was targeting terrorist groups, the Syrian government launched a major bombing campaign in late April that according to the United Nations killed more than 1,000 civilians and forced an estimated 600,000 to flee their homes.

The near-daily Syrian and Russian bombardment of opposition towns and villages dealt a major blow to the region’s health infrastructure. The UN says 51 health facilities had been damaged or destroyed, as well as 87 education facilities.

Every inch of Syria

Assad, whose forces now control roughly two-thirds of the country, has repeatedly vowed to retake all of Syria. In late summer, his forces recaptured the strategic city of Khan Sheikhoun, as well as stretches of a major highway that links the capital of Damascus to the major northern city of Aleppo.

“Damascus has never budged in its desire to regain every inch of Syria. Idlib is no exception to that,” said Dareen Khalifa, a senior analyst at the International Crisis Group. 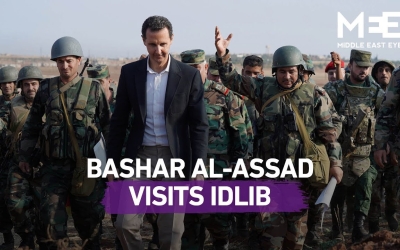 A unilateral ceasefire declared by Russia in late August has more or less held, but long-term Assad has shown no appetite for an arrangement that keeps Idlib or other parts of Syria out of his hands, added Khalifa.

For its part, neighbouring Turkey is keen to avoid a full-scale offensive. It already hosts 3.6 million Syrian refugees, and rights organisations warn more violence could unleash a humanitarian disaster on Turkey’s southern border unlike anything the country has seen in nearly a decade of war.

“Turkey is aware that rebels might render a regime offensive costly but could never possibly balance Russian air support to the regime," Khalifa said. “The only way to prevent an offensive is through a renewed deal with Moscow.”

As Erdogan and Putin met Tuesday, Assad made a rare appearance in Idlib.

Touring an area recently retaken by government forces in the frontline town of Hobeit, Assad called his Turkish counterpart “a thief” and stressed the necessity of finishing the job in Idlib, according to state media.

“We are in the middle of a battle and the right thing to do is to rally,” he reportedly told troops.

That same day, his office shared a map of the Idlib front line with the words “stay tuned”.

Tol believes Assad’s recent actions are his way of signalling to Turkey that Idlib is still important to him.

“Whenever something happens on the Turkish front, Russia and the regime remind Turkey of its duty in Idlib,” said Tol. “In a way, Assad was saying that he still has the upper hand here.”