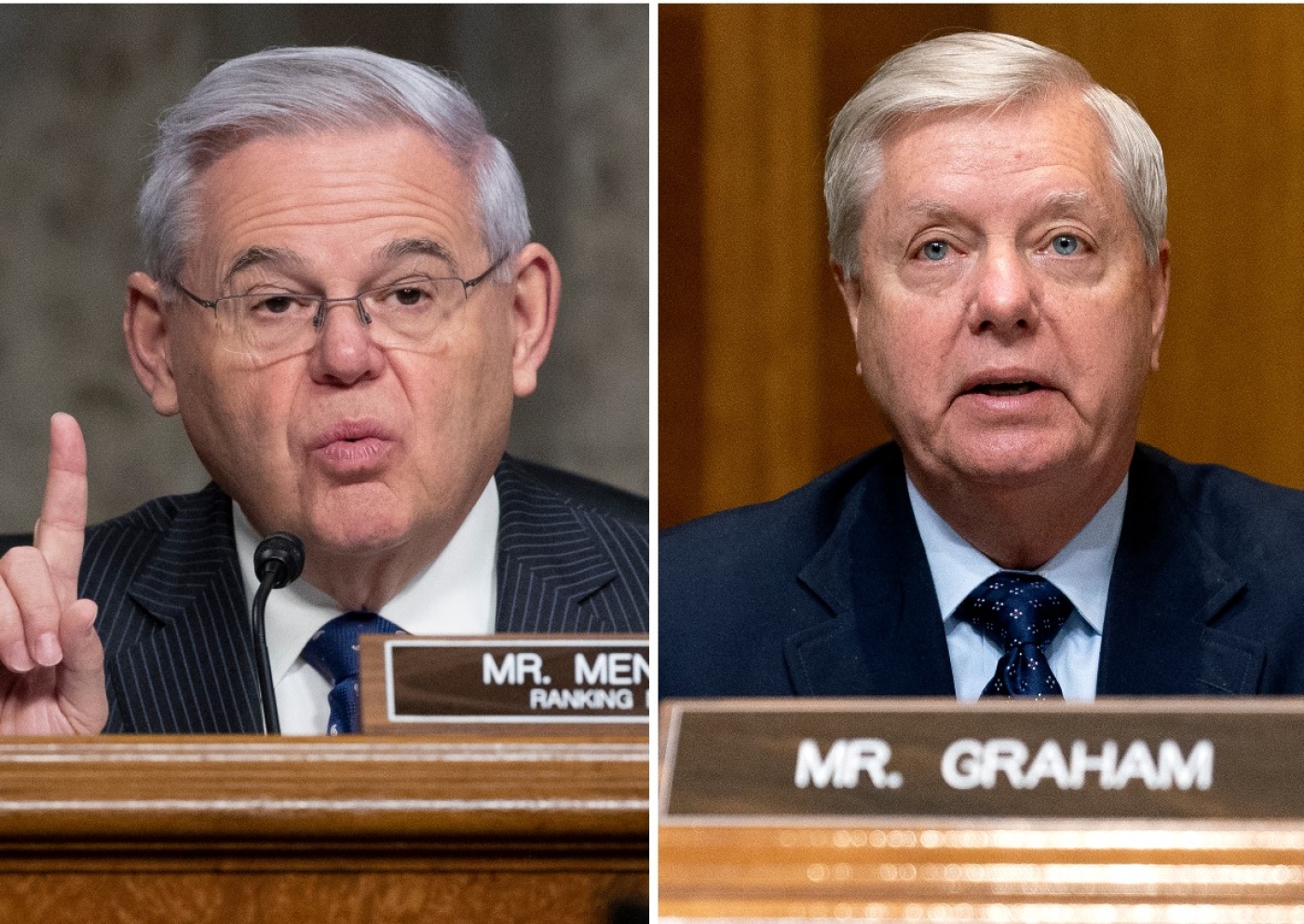 AIPAC, the Israel lobby group, is calling on its supporters to urge US senators to sign on to a letter asking the Biden administration to reach an expanded agreement with Iran, effectively opposing efforts to revive the nuclear deal in its current format.

The Senate letter, led by Bob Menendez, a key Democrat, and Lindsey Graham, a senior Republican, follows a similar bipartisan push in the House of Representatives that garnered the support of dozens of lawmakers.

"Looking ahead, we strongly believe that you should use the full force of our diplomatic and economic tools in concert with our allies on the United Nations Security Council and in the region to reach an agreement that prevents Iran from ever acquiring nuclear weapons and meaningfully constrains its destabilizing activity throughout the Middle East and its ballistic missile program," a draft of the Graham-Menendez letter says.

'Menendez and Graham are regime-change ideologues'

While the document does not explicitly reject returning to the nuclear deal, it imposes demands outside of the scope of the agreement - an objection to reviving the 2015 accord which only addresses Iran's nuclear programme.

US President Joe Biden has vowed to reimplement the multilateral agreement, known as the Joint Comprehensive Plan of Action (JCPOA), which saw Iran scale back its nuclear programme in exchange for sanctions relief.

But the push to return to the deal has faced difficulties with an impasse over which side should return to full compliance first.

Iran has been loosening its commitments to the pact in response to the US withdrawal from the agreement in May 2018. Former President Donald Trump had piled sanctions on to a variety of sectors of the Iranian economy as part of his "maximum pressure" campaign after nixing the deal.

The new US administration has disavowed Trump's approach, but it continues to enforce the sanctions amid the diplomatic deadlock. Iranian officials say US sanctions must be lifted unconditionally.

Earlier this week, US envoy Rob Malley reiterated the administration's call for negotiations.

"We can play games about who goes first. I think anyone who's dealt with this knows that neither side is going to go first entirely," Malley told BBC Persian.

"There's going to have to be some agreement on choreographing, on synchronising. We're open to discussing that."

In addition to the geopolitical hurdles, the bid to revive the JCPOA appears to be facing a battle in Washington, with virtually all Republicans and some legislators from Biden's own Democratic Party opposing a return to the agreement. Menendez, who is partly leading the charge on the AIPAC-backed letter, is the chair of the Senate Foreign Relations Committee.

According to AIPAC, Democrats Chris Coons, Joe Manchin and Ben Cardin have joined 18 Republicans in supporting the letter as of Friday.

Coons, who represents Biden's home state of Delaware, is close to the US president. He was deployed on a diplomatic mission in Ethiopia on behalf of the administration this week.

"We believe it is critical you consult with our European allies, Israel, and Gulf security partners on a path forward with Iran," the letter says. "The recent Abraham Accords provides hope that our partners and allies can work together to further regional cooperation."

Israel and Saudi Arabia have already voiced opposition to Washington's plans to return to the agreement.

So far, the Biden administration has pledged to consult with Congress and allies about Iran, but it is unlikely that the White House would seek to ratify a future agreement with Tehran as a treaty, which would require a two-thirds majority in the Senate.

The Senate letter has been sparking debate around Iran policy even before its release.

"Iran remains Israel's and America's greatest threat in the Middle East. A nuclear Iran would pose a direct danger to American interests and an existential threat to Israel," AIPAC said in an action alert to supporters sent via text message this week.

"Please urge your senators to sign a bipartisan letter to President Biden... expressing the bipartisan consensus that 'a nuclear-armed Iran would pose a grave threat to US national security interests and our allies and partners'."

The pro-Israel group spearheaded a campaign to reject the deal after it was originally signed in 2015. Win Without War, an advocacy group, released its own action alert calling on senators to refrain from signing the letter.

"Senator Menendez, the top Democrat on the Senate Foreign Relations Committee, and Republican Senator Lindsay Graham are circulating a new letter that would undermine diplomacy with Iran. How? By setting up IMPOSSIBLE standards for the deal," the group's call for action says.

"The Iran deal was meant to curb Iran's nuclear program and it worked."

Sina Toossi, a senior research analyst at the National Iranian American Council (NIAC), said the letter showed the congressional pressure the administration is facing from an alliance between hawkish Democrats and Republicans "dedicated to preventing diplomatic progress with Iran".

"With the 50-50 split in the Senate, these hawks have more leverage and have slow-rolled and tried to prevent some of Biden's national security nominees," Toossi told MEE.

"Biden will be making a major mistake if he tries to placate them. Their opposition to a JCPOA return is rooted in fundamental opposition to diplomacy with Iran. Menendez and Graham are regime-change ideologues. Their preferred policies will lead to conflict and a betrayal of Biden's foreign policy promises."

'On the same page'

Reviving the deal is entirely within the power of the White House, but the JCPOA's critics warn that without consensus on Iran policy, a future president can nix any agreement that Biden may strike with Tehran, much as Trump did in 2018.

Ben Armbruster, managing editor of Responsible Statecraft, a publication affiliated with the Quincy Institute, a pro-diplomacy think-tank, called out Menendez in a column earlier this week for partnering with Graham - a staunch hawk and close Trump ally.

"Graham isn't interested in diplomacy with Iran or reaching any kind of compromise. His position on the issue has always consistently been that Iran either capitulates to every American demand or faces the wrath of the US military," Armbruster wrote.

Earlier this month, the US State Department played down the House letter urging a revised agreement with Tehran, stressing that the administration and Congress were "on the same page in broad terms".

"We have also spoken to the need to number one: lengthen and strengthen the terms of that deal," State Department spokesman Ned Price said in response to the House letter.

"But two: Importantly, to use the JCPOA as a platform to negotiate follow-on agreements, agreements that would cover other areas of concern... Two of those concerns certainly are ballistic missiles and Iran's support for terrorism."

Iranian officials have previously ruled out talks over its missile programme or support for proxies in the region considered by Washington to be terrorist groups, arguing that it is the US that militarised the region with massive arm sales to Saudi Arabia and the UAE. 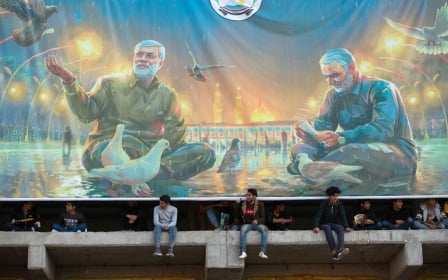