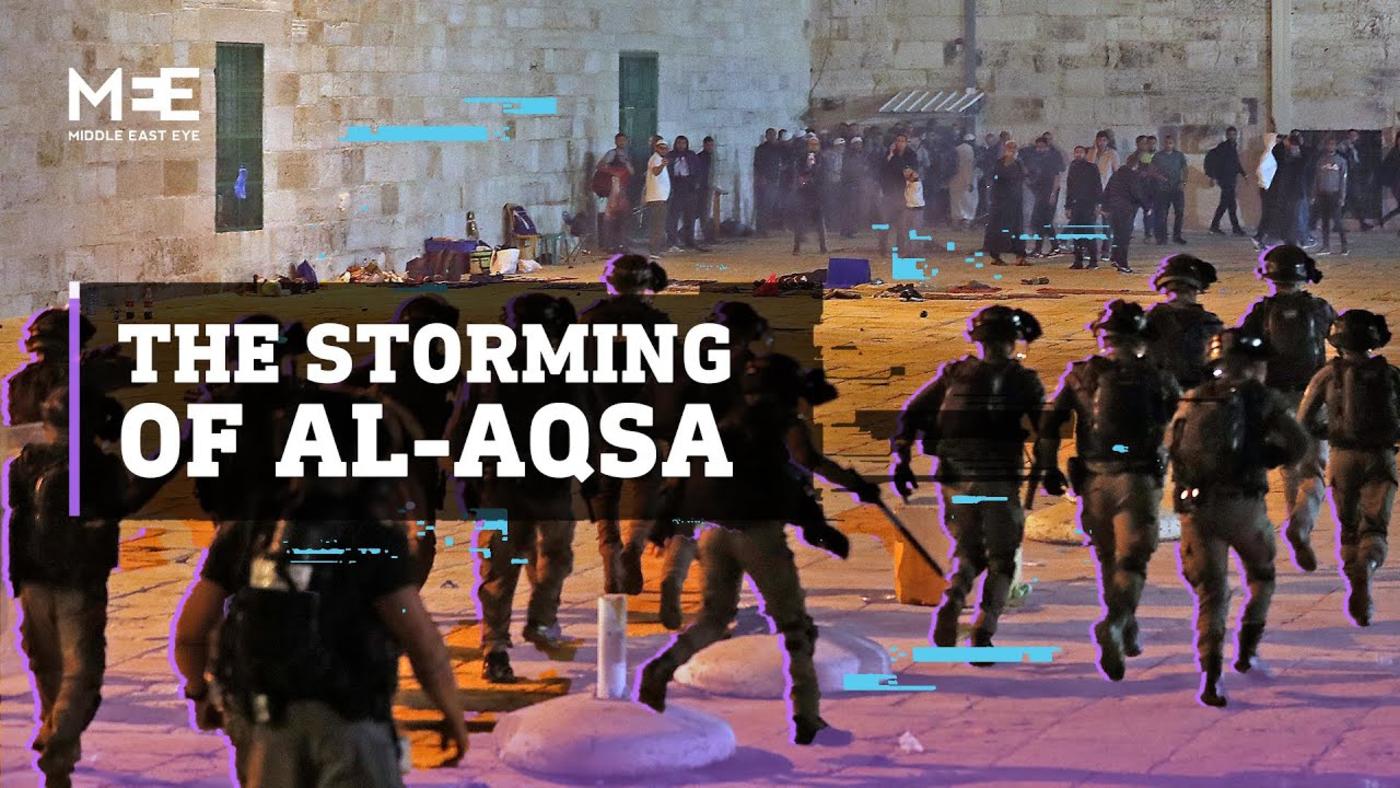 Israeli forces attacked Palestinian worshippers at al-Aqsa Mosque and elsewhere in occupied East Jerusalem, leaving 205 people injured, with 88 of them hospitalised, according to the Palestinian Red Crescent.

Late on Friday, Israeli forces used tear gas, stun grenades and rubber-coated steel bullets to disperse thousands of worshippers who had gathered in al-Aqsa Mosque on the last Friday of Ramadan.

WATCH: Palestinians praying near one of the gates of #AlAqsa compound were attacked by Israeli soldiers with sound grenades.

The Red Crescent said many of the injuries reported were to the head and eyes. Israeli police said six officers were injured as tensions intensified throughout the night.

The violence on Friday night going into Saturday morning capped a week of escalating tensions in the city over the imminent eviction of six Palestinian families from their homes in the neighbourhood of Sheikh Jarrah.

A number of Palestinian leaders stressed the need for urgent action to prevent the escalation of events. Palestinian President Mahmoud Abbas said that he held the Israeli government "responsible" for the unrest and voiced "full support for our heroes in al-Aqsa".

Palestinian civil society has called for a day of anger on Saturday in response to the crackdown at one of the holiest sites in Islam during Ramadan.

The attacks drew strong condemnation from both Turkey and Qatar, which demanded an end to Israel's "provocative, aggressive attitude" and called for a swift end to aggression against Palestinians.

The United States called for de-escalation, and warned against carrying out the threatened eviction of Palestinian families in Sheikh Jarrah that has sent tensions soaring.

"The United States is extremely concerned about ongoing confrontations in Jerusalem... which have reportedly resulted in scores of injured people," a statement from State Department spokesman Ned Price said.

International observers urged calm. UN Special Coordinator for the Middle East Peace Process Tor Vennesland tweeted his concern and urged all parties to "respect the status quo of holy sites in Jerusalem's Old City in the interest of peace & stability."

We are extremely concerned about ongoing confrontations in Jerusalem, including on the Haram al-Sharif/Temple Mount and in Sheikh Jarrah. We call on Israeli and Palestinian officials to act decisively to deescalate tensions & bring a halt to the violence. https://t.co/WV5adgCfmS

Earlier on Friday, Israeli soldiers killed two Palestinians and wounded a third at a checkpoint near the West Bank city of Jenin.

The Israeli army claimed that the three men were carrying homemade rifles and opened fire at the soldiers manning the checkpoint, before being shot in response.

On Wednesday, Israeli troops killed Saeed Yousef Mohammad Odah, a 16-year-old Palestinian, near the village of Odla in the north of the occupied West Bank.

Jerusalem has been on edge for weeks over Israel's restrictions on Palestinian access to parts of the Old City during the Muslim holy month of Ramadan, and Israeli authorities eviction notice for several Palestinian families to leave their homes in Sheikh Jarrah neighbourhood to make way for Israeli settlers.

The United Nations warned the forced evictions could amount to "war crimes".

We call on #Israel to immediately halt all forced evictions in occupied #Palestine, including those in #SheikhJarrah, and to cease any activity that would further contribute to a coercive environment and lead to a risk of forcible transfer. Learn more: https://t.co/XdA0KMcx3k pic.twitter.com/O6WuGSvVyr

Protests in Sheikh Jarrah and across Jerusalem are expected to continue as Palestinians attempt to save their East Jerusalem community.

Earlier this week, Israel's Supreme Court postponed its ruling on the expropriation of several Palestinian families from the occupied East Jerusalem neighbourhood. The court said it would hold another hearing in the case on Monday 10 May.