ALEPPO, Syria - Desperate hands scramble to pick through mountains of rubble from yet another devastating air attack as volunteers shout to one another in their search for survivors.

The familiar shape of an arm appears amid the concrete and brick dust thrown up by the massive bomb. The arm is tiny, grey from debris, and lifeless.

Soon a child's limp body is pulled from the rubble. It is wrapped in a shawl and taken away to be grieved for by whomever is left to grieve. More bodies follow.

The building in Aleppo's al-Marja district housed families struggling through months of government attacks. Now it does not exist, nor do many of those who once lived here.

This is but one result of more than 100 air attacks launched by government forces and their Russian allies on Friday, as they prosecute a new "comprehensive offensive" against rebel forces holding the eastern side of the city.

According to Ammar al-Selmo, head of the "White Helmets" civil defence group, a single day of relentless bombardment has killed more than 70 people and destroyed at least 40 buildings. Hamza al-Khatib, head of a hospital in rebel-held eastern Aleppo, told Reuters that 91 people had been killed. The Syrian Observatory for Human Rights, a UK-based watchdog, gave a more conservative estimate of 30 dead and dozens more wounded.

"Can you hear it? The neighbourhood is getting hit right now by missiles. We can hear the planes right now," Mohammad Abu Rajab, a radiologist, told the Reuters news agency. "The planes are not leaving the sky, helicopters, barrel bombs, warplanes."

With the recent, week-long ceasefire now in total collapse, there is no end in sight for Aleppo and the 250,000 people still estimated to be trapped in rebel-held areas. And the bombs that are falling will be followed by a ground assault, the Syrian military has said.

"With respect to the air and artillery strikes, they may continue for some time depending on the field situation and the terrorists' losses," a spokesman said.

"Like any military operation, it starts with preparatory air strikes and artillery and then the ground forces work according to the results of the strikes and their impact."

Preparing the way appeared to include targeting the White Helmets, with three of its four bases in eastern Aleppo hit on Friday. One volunteer was reported dead and five vehicles destroyed.

"We have four centres in eastern Aleppo," spokesman Abdul Rahman al-Hassani said. "The aircraft targeted three centres. Two of them are now out of service."

Reports on social media suggested that Russia, a key ally of Syrian President Bashar al-Assad, was using "bunker buster" bombs - munitions designed to burrow into the earth before detonating, destroying anything - and anyone - sheltering underground.

In the al-Kalasseh district, three buildings were levelled by a single strike, and rescue workers were trying frantically to reach survivors using a single bulldozer and their hands.

In al-Musalat, also in rebel-held east Aleppo, the bodies of more dead children were being pulled from beneath the rubble, as residents were seen walking through streets filled with dust and ash - the only remnants of their homes after the bombs fell.

It is less than a week since the US-Russian ceasefire deal finally faltered amid the destruction of a UN aid convoy in the village of Urem Kubra, just outside Aleppo, with the loss of 20 lives and the destruction of enough food to feed 78,000 people.

On Friday, the UN said it was trying to find alternative routes through to Aleppo, but the intense bombing makes it difficult. Russian and American diplomats have so far failed to reach any agreement to end the violence.

Asked on Thursday whether the truce could be reinstated, Russia's foreign minister Sergei Lavrov simply said: "You should ask the Americans."

On Friday, US Secretary of State John Kerry said there was "a little progress" on halting the violence in talks with Lavrov.

"I met with the foreign minister, we exchanged some ideas and we had a little bit of progress. We're evaluating some mutual ideas in a constructive way," Kerry said on the sidelines of the UN General Assembly.

However, at a news briefing a short time later, Lavrov made no mention of progress. Instead, he accused the US of failing to honor the 9 September ceasfire agreement.

In Urem Kubra, residents remain in disbelief at the political squabbling over who carried out the attack on the aid convoy: The Americans blame the Russians, the Russian deny any part in the attack, Assad continues to blame "terrorists". Photographic evidence shows the remains of a Russian-made bomb among the skeletons of UN vehicles and the roads pockmarked by craters.

Mohammed, a resident of Urem Kubra, told Middle East Eye: "I was about a kilometre, or even less, from the site of the bombing. It was a total shock. Everyone knew that it was full of food aid. There are about 20,000 people in the area who are suffering from a lack of food.

"The regime and Russia have not changed their tactics a bit by bombing a humanitarian aid convoy. They won't admit responsibility, of course. The scary thing is the reaction of the West and the US. Everyone pretended they didn't know who had bombed the convoy, and said it might have been bombed by militants.

"Even the regime pretended the destruction had been caused by militants, when this kind of thing can't happen except as a result of air strikes. This was confirmed by multiple witnesses. But they (the government) want to sell this idea that they don't know who did it, and unfortunately they have succeeded.

"Nobody has done anything. The US and Russia are just trading accusations."

In a recent interview, Assad presented his reality in Aleppo: It was not besieged, its people were not suffering and they had everything they needed. The Syrian army could not prevent food getting in, just as it could not prevent rebels getting their hands on armaments.

A reality that is contradicted by photographs, video and witness accounts.

Ismail Barakat, whose relative was killed in the Monday attack, had this to say: "The people in rebel-held areas have nothing to do but wait to find out when they will be bombed.

"It's a genocidal campaign. Assad is doing this in front of the whole world and nobody is doing anything. He justifies killing women and children and destroying medical facilities with just three words: stamping out terrorism."

And his rage was not reserved for the government.

"We expected more from the international community," he said. "But I'm not surprised - everybody is complicit in this crime. The pictures coming out of eastern Aleppo every day are the greatest evidence of this." 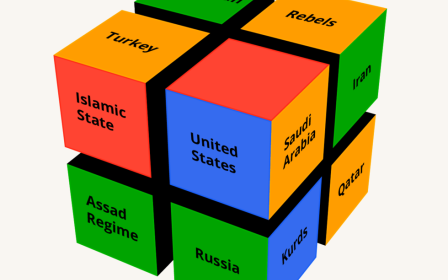 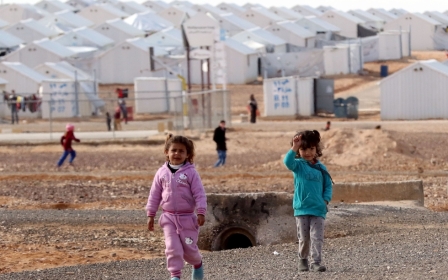 Refugees
UAE to take in 15,000 Syrian refugees over five years