President Erdogan's referendum victory has come at a cost, with new cracks appearing in a Turkish society already deeply polarised Erdogan, accompanied by his wife Emine, addresses supporters in Istanbul, on 16 April (Reuters)
By
Suraj Sharma

ISTANBUL, Turkey – Recep Tayyip Erdogan strode on to the balcony in triumph. Riding a wave of energy, he presented to the crowd below as the combative and confident president they had come to adore. After Sunday's referendum victory, he slammed detractors as sore losers in a Turkey which had decided to go his way.

But there were two Erdogans on show in the hours after the result on Sunday: to his supporters, a victor with the spoils; to the media a few moments before, a rattled campaigner taken to the brink by the narrowest of victories.

His words to the media were conciliatory, even if they were not gracious. He respected everyone regardless of how they voted but also pointedly did not refer to the percentage of his win. Instead he chose to repeatedly say that 25 million people had voted for the change.

Yet Erdogan had won by the thinnest of margins in a referendum that will turn him into an all-powerful president - just 51.3 percent voted in favour. And perhaps he knows that the victory came at a cost. As voting patterns showed, an already divided country had developed more faultlines.

Nevertheless, Suheyb Ogut, a sociologist and director of the Bosphorus Centre for Global Affairs, a pro-government think tank, told MEE that the focus on divisions in Turkey were exaggerated.

"There is as much division in Turkey as there is in the US between the Republicans and Democrats, in the UK between Labour and the Conservatives, in France between far-fight and the leftists. So long as such divisions exist, divisions in Turkey will exist too," said Ogut.

The bloc that opposed the shift to a tailor-made executive presidency will take heart that it wasn't a landslide endorsement. Indeed, Nuray Mert, a political scientist and columnist at the Cumhuriyet newspaper, told Middle East Eye that this tight outcome represented a victory for all those opposed to such a drastic change.

"I am heartened that 49 percent rejected this proposal - especially given how state resources, but more importantly state power, was used to push the change on people. It shows that the opposition came from a variety of sections - leftists, nationalists, conservatives, everybody," she said.

Of course the democratic struggle will now become a lot more difficult. But there are two years until this change

"Of course the democratic struggle will now become a lot more difficult. But there are two years until this change takes effect and hundreds of laws will need to be passed in parliament to pave the way to this new system."

And the legitimacy of the outcome is also being questioned. Allegations of fraud have been made. The very body which oversaw the voting process, the Supreme Election Board (YSK), was criticised for allowing votes in unsealed envelopes to be counted.

The Council of Europe said the vote was flawed and one-sided.

"Leave aside all the claims of vote rigging and such," said Mert. "The ruling party itself calls this a decisive and historic change. For such a change that amounts to regime change in many ways you either need a revolution or a plebiscite where 70 to 80 percent back it. With such a fine margin, its legitimacy will rightly be questioned because Turkey is a far more complex and pluralistic country for a simple majority to decide its future." Supporters of Erdogan and the shift will revel in the victory, regardless of the narrow margin.

But of particular concern to Erdogan and the ruling Justice and Development Party (AKP) might be the fact that all of Turkey's major urban centres rejected the shift to an all-powerful presidency that would literally signal an end to the parliamentary system in any real sense.

The adage in Turkish politics has always been "who wins Istanbul wins the country".

This time was different. Not just Istanbul but Ankara, Izmir, Diyarbakir and Antalya too rejected the switch to an executive presidency system. Yet it didn't affect the overall result.

It is a result that hints at a new divide along the lines of the urban class versus the rural and provincial one.

Mert said this is a now a reality that everyone in Turkey will have to pay attention to and said the urban-rural divide was expected but is not one based on education levels.

"Turkey's urban dwellers become more used to multiculturalism and cosmopolitanism and as a result more open-minded and begin to ask questions instead of blind obedience. This is in contrast to rural and provincial residents who live in highly homogenous societies," said Mert.

"Even very conservative people in urban areas stop and question their leaders despite the peer pressure they face," she said.

Ogut's view on the failure of big cities to endorse the shift is that the AKP failed to keep track with the changing nature of the urban middle class, which it largely created itself.

"I evaluate the AK party as a movement (that stretches] from the periphery to the centre. Major cities have been populated by the middle class, which expanded under the AK party," said Ogut.

"The sociology of the middle class has changed. The votes in major cities show that the AK party hasn't been able to develop a plan for this middle class," he said.

In that first speech to reporters Erdogan also reserved special mention for the Kurdish-majority southeast and thanked voters there for playing a crucial role in ensuring that the amendments package was endorsed.

On average southeastern provinces rejected the proposal by 65 percent but Erdogan and the AKP see that as a victory in itself.

Erdogan also hinted at future developments in the southeast, perhaps the first sign that he might act differently with his powers now consolidated.

"We see that all provinces in the southeast Anatolian region showed a 10 to 20-point increase," he said.

"God willing these results will also bring the good news of the start of a new era in our country."

But if his remarks herald a new beginning it will be one less division in society and a major one at that. 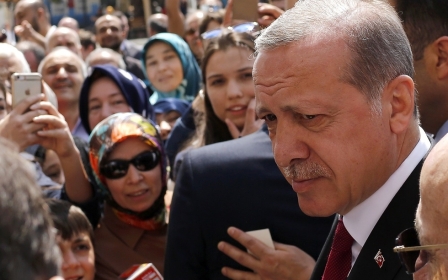